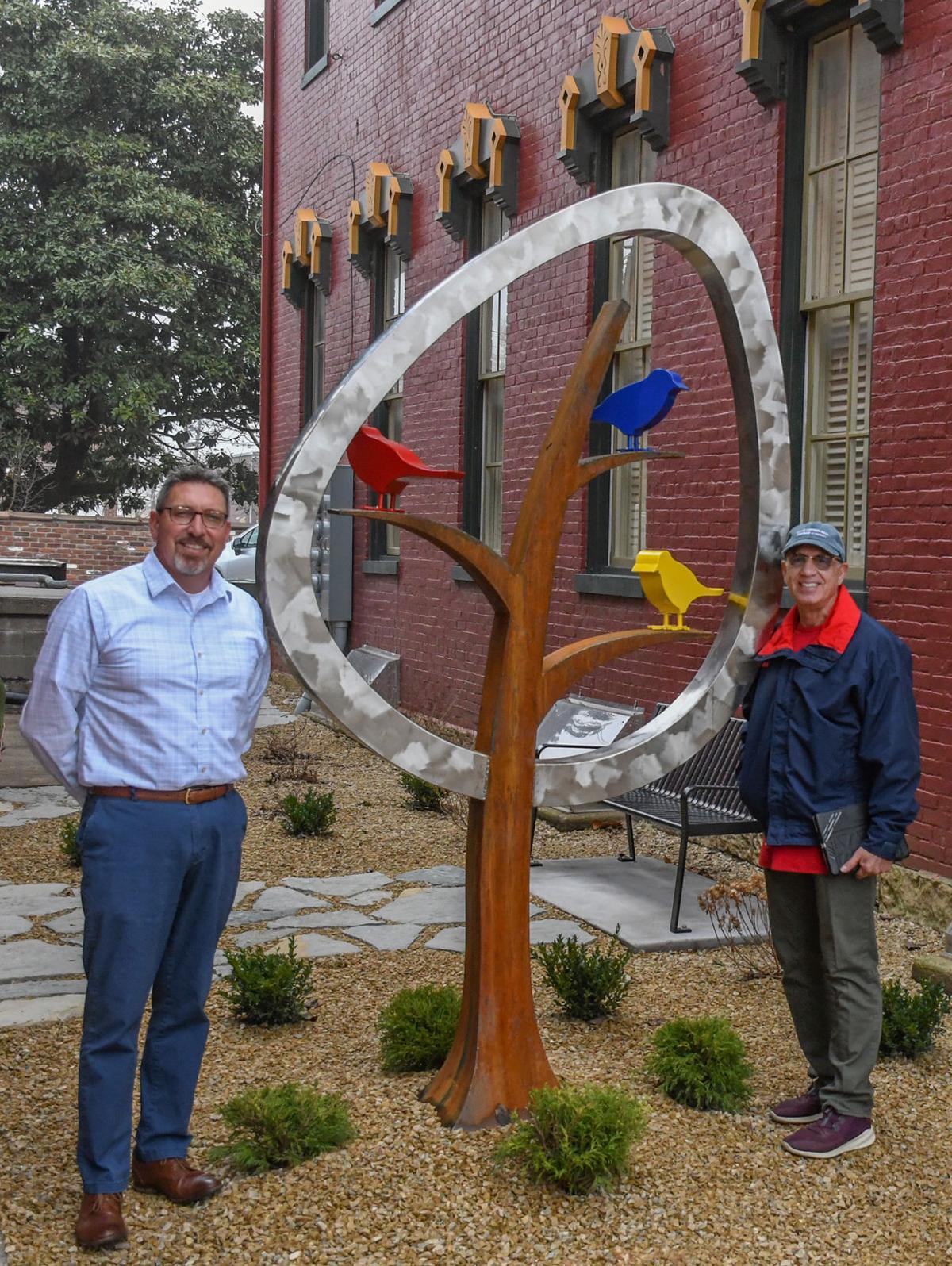 Bill Barnes and Larry Crisafulli are pictured with the sculpture “Spring Awakening,” by artist Dale Rogers, located between the 420 West Apartments and Community Foundation of Madison and Jefferson County Inc. at 416 West Street. 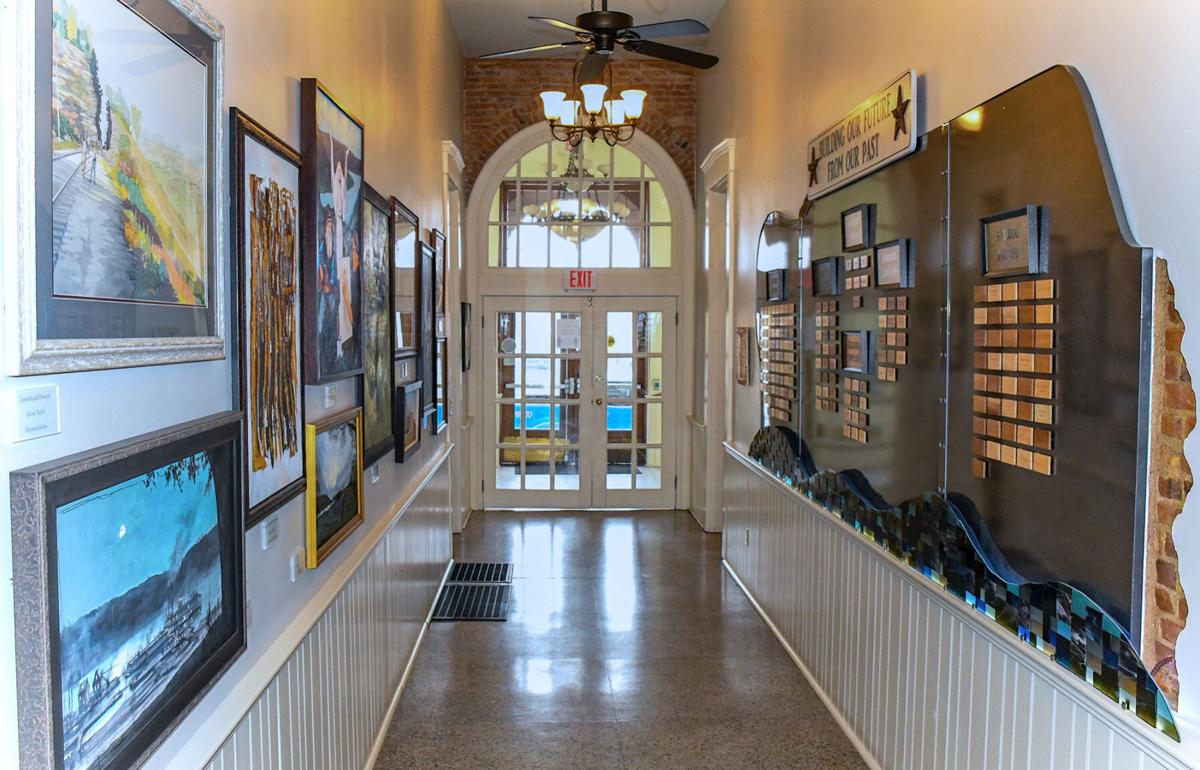 Some of the artwork at the Community Foundation of Madison and Jefferson County Inc., located at 416 West Street in Madison, where a good portion of the paintings were commissioned through local artists and inspired by local scenery.

Bill Barnes and Larry Crisafulli are pictured with the sculpture “Spring Awakening,” by artist Dale Rogers, located between the 420 West Apartments and Community Foundation of Madison and Jefferson County Inc. at 416 West Street.

Some of the artwork at the Community Foundation of Madison and Jefferson County Inc., located at 416 West Street in Madison, where a good portion of the paintings were commissioned through local artists and inspired by local scenery.

Bill Barnes was strolling through the Madison Chautauqua Festival of Art in 2018 when he came across and acquired “an incredible piece of artwork” that he has been waiting for the right time to put on display in Madison with the feeling that public art is good for the community.

A couple of weeks ago, the sculpture, called “Spring Awakening,” found a home in Madison between the Community Foundation of Madison and Jefferson County Inc., located at 416 West Street and the 420 West Apartments.

“I have never seen anyone in our area do anything like it,” Barnes, the president and chief executive officer of the Community Foundation said, noting he was impressed with what the sculptor was able to create in cor-steel material.

The sculpture, designed by Dale Rogers, a full-time metal sculptor from Massachusetts who has participated in the Madison Chautauqua, features three birds made of painted steel, in a tree, made of cor-tel steel.

“I love trees and I love birds,” said Barnes.

Valecia Crisafulli, who owns 420 West Apartments with her husband, Larry, said the sculpture not only expresses spring, but also the nature and natural beauty of the Madison area.

“Nature is one of Madison’s assets with our natural beauty,” Valecia said, noting the artwork is much like the scenery found at Clifty Falls State Park and other places around Madison.

It also plays well with the sculptures just across the street in nearby Lytle Park.

Because of the materials, Barnes said the sculpture “will hold up well over time,” and he’s hopeful it inspires others to see what art they can create with metal.

Rogers, the artist, explains that “the tilted stainless steel surround of the tree satisfies my love for abstracts and the birds offer whimsical appeal. The shape of the tree is also very interesting in its simplicity; it is actually a large leaf.”

The sculpture’s cost was split by CFMJC Properties LLC, an LLC formed by the Community Foundation, and the Crisafullis.

In a sense, the project beings together of two properties severely impacted by fire on Aug. 25, 2006 but now restored and repurposed, making them beautiful again.

The 420 West Apartments had served as the Madison Elks Lodge from 1904 until ravaged by an early morning that extended into the 416 West Street building, which had served as Madison’s City Hall until 1993. Both buildings are now fully restored with the old City Hall now home to the Community Foundation on the first floor and Mires Dance Studio on the second floor. The old Elks building is home to seven apartments.

“We have great tenants,” said Valecia Crisafulli, who noted the building occupancy is full. “It proves the demand for nice residential living in downtown Madison.”

She hopes the sculpture continues a more recent trend in focusing on public art in downtown Madison. “I am very excited to see others develop the same thing downtown.”

Barnes agreed, noting the value of public art both downtown and throughout the city.

“Art can be a real driver for a community,” Barnes said. “I would love to see more public art on the hilltop, too.”

“We were not funding the art like we should have been,” he said, noting that only 1.5% of the foundation’s grant dollars were going to the arts. That has since been increased to about 9% or about $20,000 annually, Barnes said, adding that the foundation has also supported performance artists by providing $8,900 to the Madison Music Movement for a trailer and portable stage. The group has also funded other art events and programs from school bands and choir programs to theater.

The Community Foundation’s commitment to arts has been increasing since it moved into the old City Hall in June of 2013. Prior to relocating to its current location, the Foundation was at 214 East Main Street, where there was space for a few paintings but not much more.

“When we came here, we had all this wall space,” he said, noting what started with a few paintings has gradually grown to 50 pieces of art mostly done by local artists. “Not a lot of people visit us and see inside of our building, but the sculpture is just one piece of our commitment to supporting the arts.”

A good portion of the Foundation’s artwork featured the work of local artists and was inspired by the Madison and Jefferson County community. In 2016, the Foundation commissioned 11 such paintings.

“All artists lived in the county,” he said, and each work reflected Jefferson County’s history and/or identity including scenes from the Lanier Mansion, the Farmer’s Market in Madison, the Milton-Madison Bridge, the Eleutherian College and Hanover College. “This collection illustrates the wonderful talent and diverse styles from artists” from Jefferson County, Barnes said.

The Community Foundation has also used art in creating a special donor recognition display in which local residents were utilized to design and create it using brick, cast iron, concrete, copper, glass, limestone, marble, plaster, slate, steel, tin and wood — all significant to Jefferson County’s story and found in many of the historic structures of the area.

Barnes said the art in the office extends to the meeting room where the conference table was made by Madison Table Works, and bowls and a wooden vase were created by the late Madison art teacher Gary Chapman.

“With this building being the City Hall for so many years, I am pleased for this to be a place for the community,” said Barnes.