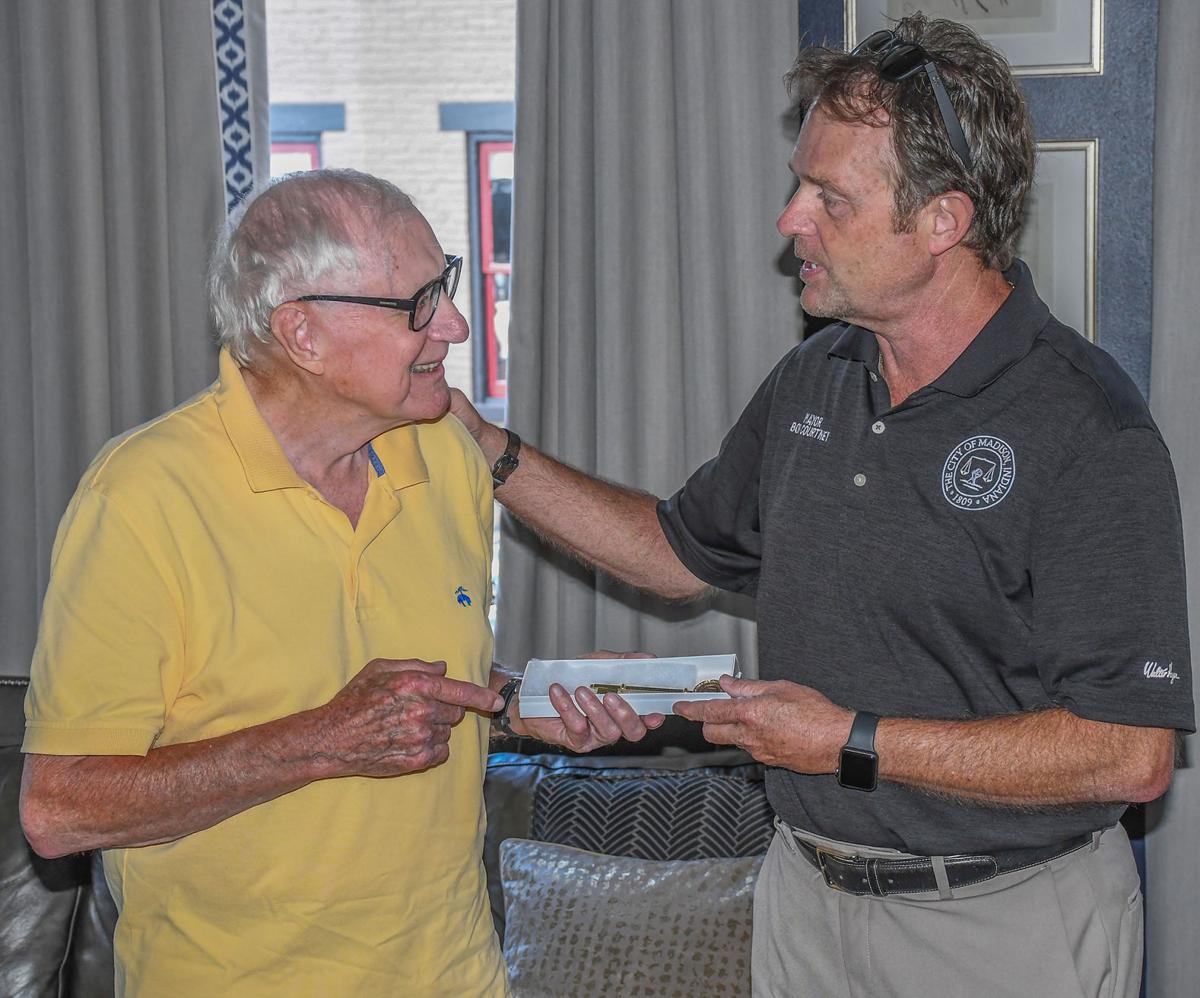 Madison Mayor Bob Courtney surprises Frank Hayes with a ceremonial key to the city. “He’s been a wonderful ambassador for the community,” the mayor said of the 89-year-old resident of downtown Madison. For additional video coverage of this story, visit our media partner WKMNews.com. 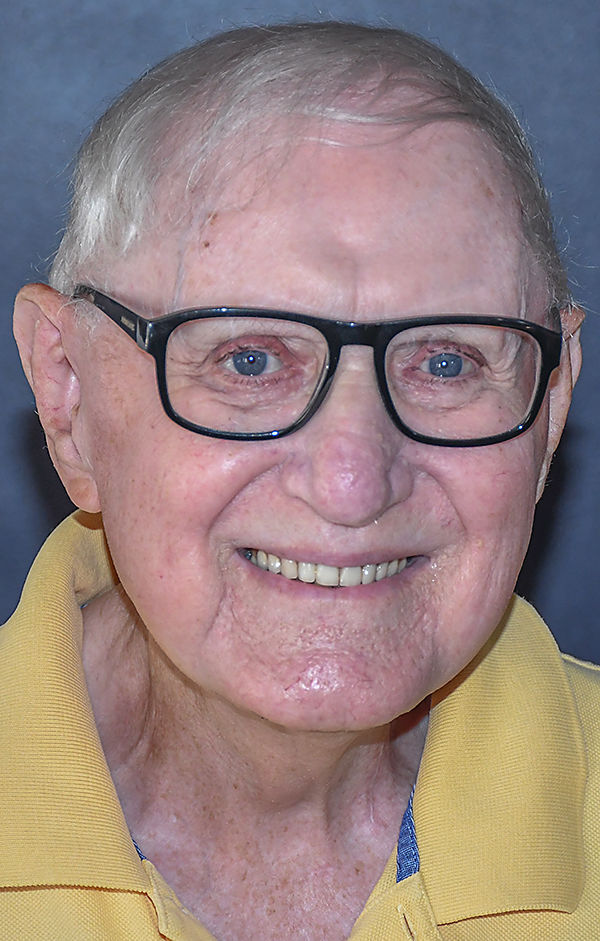 “When I see something negative, I go the other way. I don’t have time in the day to waste on negativity.”

In the August issue of “Rider” magazine, columnist Eric Trow writes about a cross-country motorcycle trip with his son, Porter, and about a stop in historic Madison, Indiana, where an older gentleman greeted them with a joyful “Good morning” as they were searching for a coffee shop.

The older gentleman asked about the journey the father and son were on, and then told them about the city and his life in Madison.

Even though the article doesn’t mention the older gentleman by name, Wayne Stearns of North Vernon said “there can be little doubt” that the “older gentleman” was 89-year old Frank Hayes.

It’s actually an encounter Hayes remembers. “I do that with a lot of people,” he said. “I’m proud of our history here and everything Madison represents. We need to tell people about it.”

Hayes, who lives in an apartment above the Red Roaster Coffee and Eatery, 102 West Main Street, encountered the Trows there.

Eric Trow was impressed by the kindness Hayes had shown him and his son and wrote about that in the motorcycle publication.

“This is the small-town friendliness and hospitality I was drawn to as a young solo traveler, and it was wonderful to see Parker discovering it as well,” he wrote.

Madison Mayor Bob Courtney said recently it’s residents like Hayes who make Madison a special place to live and a special place for visitors and it’s for that reason Courtney presented Hayes a ceremonial key to the city.

“He’s been a wonderful ambassador for the community,” said Courtney.

In addition to the friendliness Hayes shares with passersby, he’s also philanthropic and donates to several local organizations including the Lide White Boys and Girls Club and the Children’s Advocacy Center of Southeastern Indiana.

Hayes is only the second person to receive a key since Courtney became Mayor in October of 2019 — the other being Elsie Perry-Payne, a long-time volunteer in the city, including leadership of the Pilot Club which holds Old Court Days twice a year around the Jefferson County Courthouse.

Hayes had lived in New York for 57 years before moving to Madison six years ago after his wife died in 2014. He moved into the apartment building — he calls it the old Lodge Brothers Furniture Store for the longtime business that occupied the structure for many years at the northwest corner of Main and West streets in downtown Madison — that has housed a coffee shop now for two decade. He spends much of his time out and about in the vicinity of the coffee shop, spreading kindness to the people he encounters.

Hayes was born in Indianapolis, but later moved to Jefferson County, where he attended Hanover High School. He went on to serve with US Air Force reconnaissance units from 1951-1955. Following his military discharge, he worked at Philco in Philadelphia before successfully moving on to a career involving several important engineering projects. For 12 years, he was president of the Iron Gate chapter of the Air Force Association in New York, and he’s been an active supporter of the National Air Force Museum in Dayton, Ohio.

During his time in the Air Force, Hayes said he “saw dozens of miracles one after the other” including surviving an airplane crash himself. Those experiences have strengthened his faith.

“After the airplane crash, I didn’t worry about things I couldn’t do anything about,” said Hayes. And even in the last year, Hayes has overcome a stroke, a bleeding ulcer and COVID-19.

Hayes credits Mary Beth Boone, owner of Blush on Main, for the support she gave him during his recent health challenges. He said Boone is one of the angels in his life.

But Boone thinks much of the phenomena of Hayes’ life is a “super tribute” to Frank.

“Because of the kindness he bestows on other people, he has blessings in his life,” she said. “He’s so good to people and kind.”

Boone noted that Hayes has made positivity his mantra.

“When I see something negative, I go the other way,” said Hayes. “I don’t have time in the day to waste on negativity.”

Hayes is happy to be in Madison — he’ll celebrate his 90th birthday her on Oct. 28 — and notes life has been good.

“There have been so many good things about my life, I can’t think of anything I would have changed,” he said.