Circuit Judge D.J. Mote on Friday granted a preliminary injunction, effective immediately, to stop a property owner on North K Road and organizers of “any ‘Flea Market’ or ‘Animal Swap’ ” from holding any additional events at the site until further order of the court.

The property owner Susan Reed Smith, 2355 North K Road, may have violated that order the very next morning when an estimated 100 to 150 vehicles attended a gathering that organizers were now calling a “yard sale” at the Smith farm just north of Madison.

Mote’s issued his ruling at 5:30 p.m. on Friday after holding an 11 a.m. hearing in which the City of Madison’s Board of Zoning Appeals Attorney Devon Sharpe argued for the injunction with BZA Chairman Scott Baldwin and Madison Director of Building and Design Brian Martin both testifying.

Citing concerns over the safety of those in attendance and the public safety of neighbors and others and the lack of a plan for dealing with a public health crisis, Mote ruled that the events being staged at 2355 North K Road were prohibited by the City of Madison’s zoning ordinance that not only applies to the city but a two-mile buffer zone around the city limits where Smith’s farm is located.

Mote also ruled against a motion to dismiss the injunction that was filed by Smith or the organizers on Friday morning prior to the hearing in Jefferson Circuit Court.

Sharpe argued that Smith’s property, which is zoned Residential Agriculture, would need a conditional use permit through the Board of Zoning Appeals and possibly other permits in order to stage the type of events that were held at the site a week earlier, was scheduled to be held on Saturday and on numerous other weekends through October. He said those permits take into account public safety and require that plans be in place to handle any crisis that might arise.

Neighbors have complained about the events Smith has held, or allowed to be held at her property, dating back to an impromptu heavy metal music concert in July 2019, citing heavy traffic, noise from vehicles and music, dust from ATVs and smoke from bonfires and campfires. The events have charged either entry fees or parking, have food and other vendors on site and allow overnight camping as well as other amenities consistent with a festival or entertainment event and inconsistent with a farming operation or residence.

Jefferson County Chief Deputy Joshua Taylor said Mote asked the sheriff’s office to check the property Saturday and report back any issues of non-compliance with his court order.

“We had officers go out there and they were having an activity that they were calling a ‘yard sale,’ ” Taylor said. “We notified them that they were in violation of the court order and subject to fines and further court sanctions and we documented what was taking place with photos and video to give to the judge.”

Taylor said law enforcement experienced no direct resistance to their presence — there were complaints contrary to that at the site a couple of years ago — and there were no problems, citations or arrests made. He said it was reported to him that there were about 100 to 150 cars at the site.

Jefferson County Sheriff David Thomas was briefly at the property on Saturday and noted that the crowd was large enough that traffic on North K Road was moving very slowly and often at a standstill as vehicles accessed the property at one location and left the site at another so that the narrow roadway ended up gridlocking in both directions.

Thomas said he counted 42 cars on the road at one point and only three vehicles had Indiana registration plates. He also noted that several neighboring farmers had equipment working fields and planting crops since it is that time of the year.

Madison Mayor Bob Courtney on Friday noted that Mote’s ruling could not have been any more plain and that Smith and her event organizers need to stand down until they go through proper channels and provide proper documentation that the events are safe for visitors and neighbors and adhere to the protocols the city requires for similar events.

“If anyone ignores the order they can be cited in court for additional violations,” Courtney said. “The next step would be for the owner and the organizers to follow procedures and apply for a conditional use permit at Board of Zoning Appeals.” 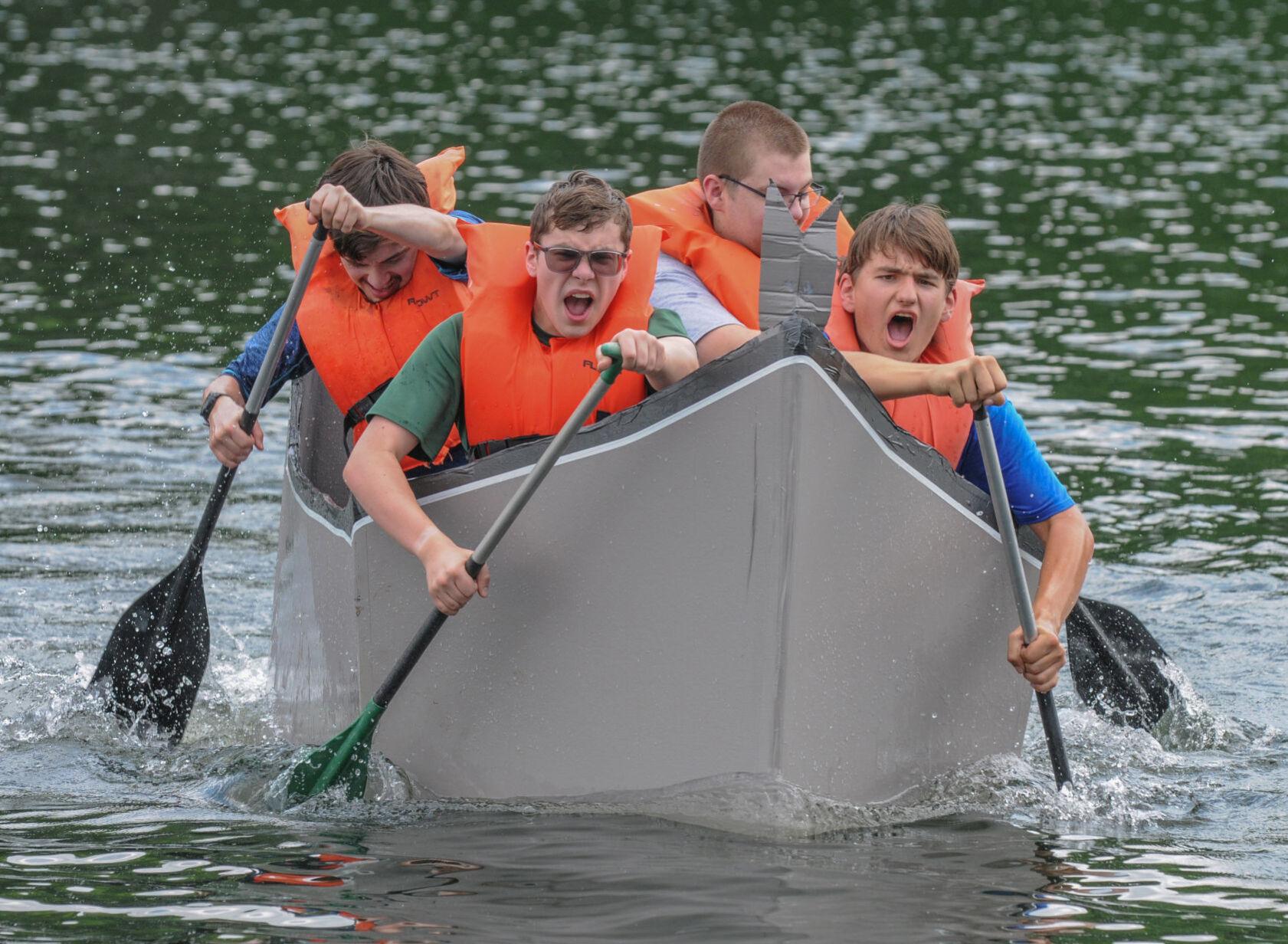 Visit Madison Inc. is on the verge of reaching a new contract with the Jefferson County Board of Tourism to provide tourism promotion to the county but the details of that deal could come down to how JCBD categorizes VMI’s role pertaining to festivals.

VMI members, meeting Monday morning ahead of Monday night’s JCBT meeting, said the tourism marketing venture is prepared to continue its mission statement to “improve the quality of life and economy of Jefferson County by increasing visitation and providing an outstanding visitor experience” but that needs to specifically include working with and promoting the various festivals that help bring in many of those tourists.

It’s an issue that surfaced recently when VMI’s most recent contract proposal included specific mention of “festivals” but was later omitted from JCBT’s latest version even though JCBT President David Bramer said VMI could continue to promote festivals.

“It seems like we’re hung up on one word,” VMI Board President Lucy Dattilo said Monday, “but we do festivals.” Dattilo said festivals are an important component of VMI’s effort to create experiences that bring visitors to Jefferson County, and making sure “festivals” are specifically in the contract is important as they work to finalize the document.

Most recently, VMI has taken on the additional role of marketing the Madison Regatta, along with actively being involved with Madison Ribberfest, Madison Chautauqua Festival of Art, Nights before Christmas Candlelight Tour of Homes, and other festivals throughout Jefferson County.

Sarah Prasil, VMI’s Marketing and Advertising Director, reported she’s been busy in her efforts to promote this year’s Madison Regatta & Roostertail Music Festival, has developed a marketing plan, and is actively working toward making media buys, compiling and creating radio scripts, maintaining the Regatta website, and everything else related to promoting the July 2-4 event.

“This event is valuable to the community,” said Prasil, and an important component “to everything we are doing” in promoting Jefferson County.

VMI Secretary/Treasurer Hannah Fagen agreed but said she wishes VMI had received better financial support for marketing the Regatta. “I love that we are helping the Regatta but I think we’re being taken advantage of,” she said, noting JCBT appropriated $10,000 for marketing, much less than what she said is needed to effectively promote the event.

“The Regatta needs to happen. It kicks off our festival season,” Fagen said. “It’s great to help them” but what funding JCBT has provided VMI is not enough to do the job right. “We need some sort of money coming in” to effectively support the efforts being done by VMI, Fagen said.

In other business, the VMI board:

• Approved returning money to entities that provided matching funds for a $225,000 US Department of Agriculture grant for promoting the Indiana Wine Trail now that two of the five wineries have withdrawn. With fewer wineries to promote matching money is being returned — $40,000 to the Jefferson County Commissioners, $20,000 to JCBT and $884 to the Switzerland County Board of Tourism. The money had been handled by VMI and kept in a separate fund.

• Prasil said local innkeeper tax collections for the month of April were $38,800, showing that Jefferson County tourism is bouncing back from the pandemic.

Dattilo applauded Love’s effort to expand her focus and serve VMI in different roles. “She was hired as event coordinator, then it evolved into guest services, and then she served as an assistant to the executive director. She has stepped up in the roles” she has done for VMI. “I really appreciate what she has done.” Dattilo said.

Love reported on her work in preparation for Ribberfest, the Chautauqua and Nights Before Christmas. Love has also coordinated with upcoming visits by the American Duchess riverboat, which will be returning to Madison on June 8 and June 20.

As more people are vaccinated for COVID-19, it appears fewer people are being impacted by the pandemic but the death toll continues to climb.

Indiana reported two deaths since Friday while in Kentucky 11 deaths were reported on Sunday.

The Indiana Department of Health announced Monday that 381 additional Hoosiers were diagnosed the previous day with COVID-19 through testing at state and private laboratories. That brings to 740,564 the number of Indiana residents now known to have had the novel coronavirus. To date, 13,137 Hoosiers are confirmed to have died related to COVID-19.

In Jefferson County, there have been just three new positive cases of COVID-19 since Friday. Overall, there have been a total 3,326 confirmed cases of COVID-19 and 82 deaths. The county’s current seven-day average positivity rate is 1.6% and the seven-day positivity for unique individuals is 1%. As of Monday, 12,512 Jefferson County residents are fully vaccinated and 12,746 residents have received at least a first dose of COVID vaccine.

There have been four new cases of COVID-19 in the last three days. Overall, Switzerland County has had a total of 798 positive cases during the pandemic and a total of eight deaths. The county’s current seven-day average positivity rate is 2.8% and the seven-day positivity for unique individuals is 6.7%. Switzerland County has 2,230 fully vaccinated and 2,245 that have received the first dose of a two-dose vaccination series.

COVID vaccines are continuing to be administered Monday through Friday at the Jefferson County Health Department. Appointments can be scheduled by visiting www.ourshot.in.gov or by calling 211. Walk-ins are welcome Monday, Tuesday and Wednesday from 2 p.m.-5 p.m., and Thursday and Friday from 10 a.m.-2 p.m. Everyone 12 years of age and older is eligible. An adult must accompany a child 12 to 15 to the appointment; parental consent is required for minors.

Kentuckians should visit vaccinemap.ky.gov to find a COVID-19 vaccination site near them.