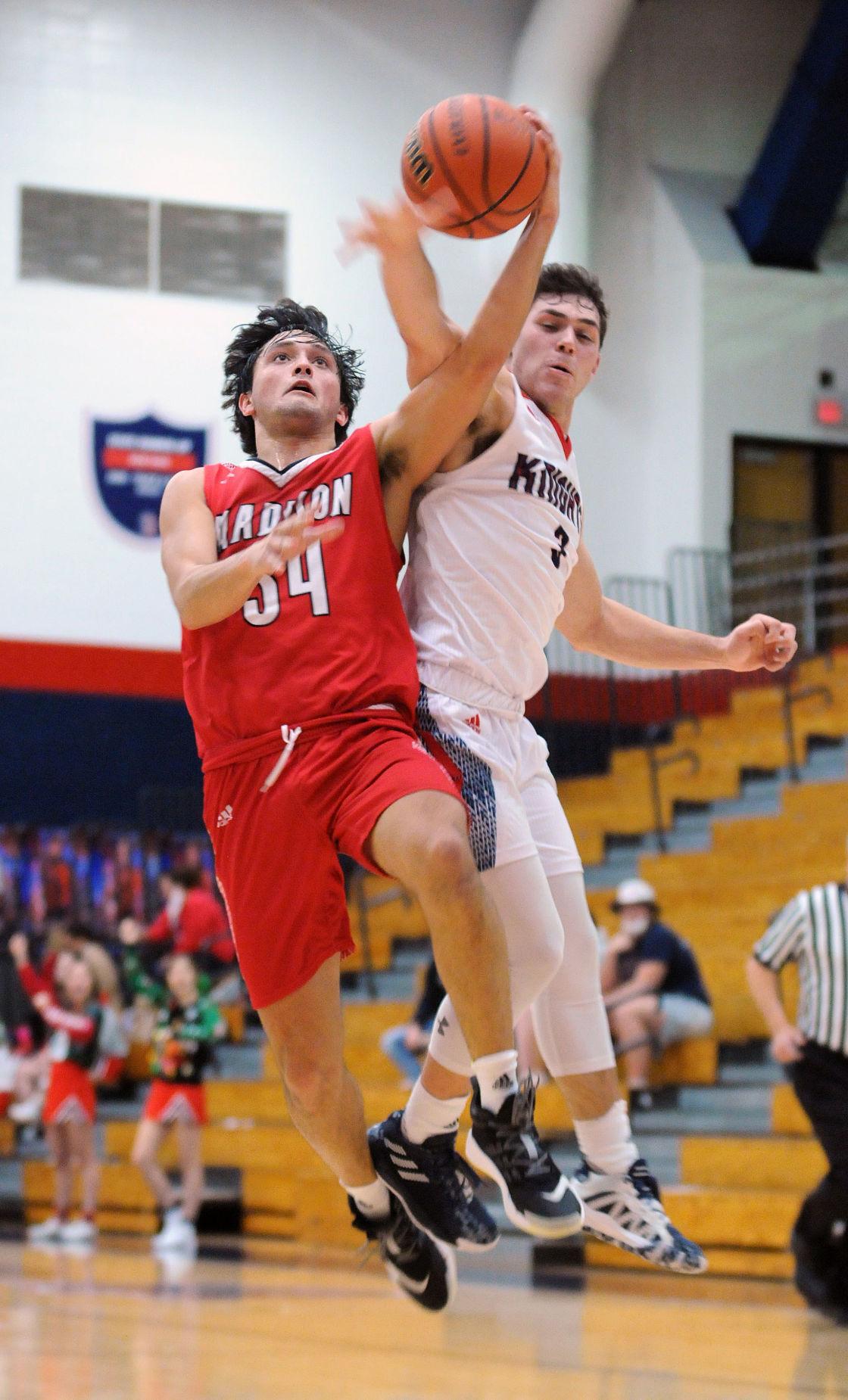 Madison’s Nick Center (34) goes to the basket while being fouled by South Dearborn’s Tobie Teke (3) during Tuesday’s game in Aurora.

The much anticipated COVID-19 vaccine has arrived in Indiana and some of the first recipients of the new drug were administered shots this week at Clark Memorial Health in Jeffersonville.

Initial recipients of the vaccine will be frontline healthcare workers who are most exposed to the virus on a daily basis and one of those receiving his first of two shots — the vaccine is given in two doses about three weeks apart for full efficacy — was Jefferson County Health Officer Dr. John Hossler.

Hossler, who works out of King’s Daughters’ Health in Madison and is one of the doctors providing services at the hospital’s COVID clinic, said the procedure was quick and painless other than having to travel to Jeffersonville to receive the injection.

Clark Memorial is one of two sites in the state to receive the initial shipment of the vaccine and one of about 11 sites that will initially make up a system of regional distribution hubs due to the specialized requirements for storage of the vaccine.

The vaccine received at Clark Memorial was produced by drug company Pfizer in Michigan and arrived in containers of dry ice. It must be stored at -70 degrees fahrenheit in ultra-cold freezers until just before use. The drug is then allowed to thaw and must be injected within six hours to remain effective.

Hossler said he preregistered for the injection online, received an appointment on when to arrive and was quickly given the shot upon arrival. Afterwards, he remained at the hospital for several minutes to be observed for any adverse affects, checked out the distribution procedures and then drove back to Madison.

“Clark started giving the vaccine to frontline healthcare workers Monday afternoon and on Tuesday they had given about 200 shots by the time of my appointment at 3:50 p.m.,” Hossler said. “They said there had been no adverse reactions so far. While I was there they gave me an appointment time for the second shot in three weeks so all of that is taken care of.”

So far, about 20,000 Indiana healthcare workers statewide have registered to get their first dose and more than 50 Indiana hospitals and clinics are expected to receive a more than 55,000 doses of vaccine by the end of this week with additional shipments expected weekly.

Hossler said the vaccine distribution process will be dependent on how much vaccine Pfizer and other vaccine makers can produce and ship. The distribution model will target frontline healthcare workers initially, workers and elderly residents of long-term care facilities secondly and other groups after that such as first responders, elderly at-risk residents and the general population. He said it could be weeks before the vaccine is widely available and urged residents to continue to be vigilant on mask wearing, social distancing and hand washing.

In fact, Hossler said that even though he is now halfway to being vaccinated for the coronavirus, he intends to continue following safety protocols like mask wearing, social distancing and hand washing. Based on what testing was completed prior to the vaccine being fast-tracked into distribution, the drug is estimated to be 96% effective — a success rate much higher than the 90% effective rate considered successful by most vaccines — but that still leaves significant exposure for a virus that has proven deadly for more than 6,657 Hoosiers, 303,867 Americans and 1.6 million people worldwide.

Up until now, Hossler said the only defense most people have had against the coronavirus has natural immunity, isolation to avoid exposure and possible immunity for those who have been infected and recovered. The vaccine could be a game changer depending on how effective it is both short term and long term.

Infectious disease experts are gathering data on how long survivors of COVID-19 can expect immunity and they’ll study the vaccine similarly to determine how much protection both virus antibodies and the vaccine provide. Hossler said since the COVID vaccine was fast-tracked into production, there is much to be learned and it could take months or years to determine if follow up booster shots or modifications in dosage or delivery are required. Most vaccines take four or five years to reach market, allowing developers to answer many of those questions prior to widescale distribution.

Although it could be weeks before the vaccine is widely available in Madison, other local frontline workers are expected to receive the vaccine sooner — Dr. George Alcorn, another doctor in the local COVID clinic, got his on Tuesday as well — but once the flow of vaccine begins Hossler expects it to be significant and steady based on his experience.

“Once the pipeline is established I think there will be a pretty good influx of vaccinations available,” Hossler said, later adding, “I think we’re seeing the road back to normalcy ... at least we’re seeing the light at the end of the tunnel.” 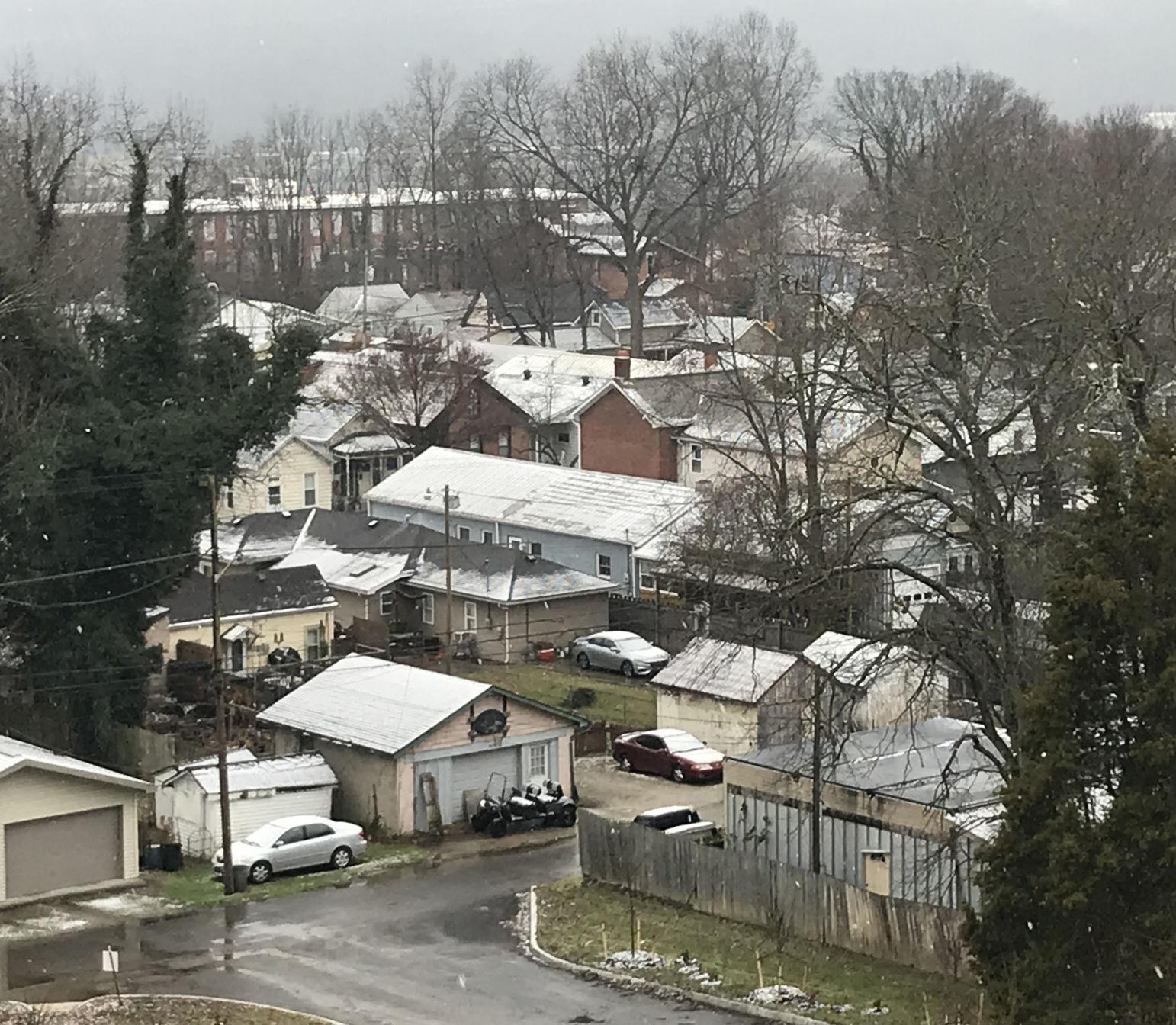 A mixture of snow and sleet provided a light dusting of winter in downtown Madison and about an inch of wintery mix on the hilltop Wednesday but roadways were mostly clear thanks to efforts on Tuesday to put down a liquid solution to prevent ice and snow from accumulating.

Sheriff Ryan Gosser said Dewitt was driving on Main Cross Street in Ghent around noon Friday and passing another vehicle driven by Kendra Briel at the time of the accident. Dewitt had attempted to pass another vehicle on the shoulder of the roadway when her car spun out, hitting the side of Briel’s car and knocking Briel’s vehicle into a parked vehicle owned by Ghent resident Carolyn Polley.

Police arrived to find Dewitt visibly intoxicated, said Gosser and according to the report filed on the incident, officers could smell alcohol on her breath.

“She couldn’t hardly stand up,” said Gosser, who later helped officers get Dewitt out of their patrol vehicle at Carroll County Memorial Hospital for blood tests.

Gosser noted Ghan Dewitt was resistant and combative when officers first tried to apprehend her. A subsequent search of her car revealed an open alcoholic beverage, a small amount of methamphetamine and drug paraphernalia.

Briel was taken to the hospital after complaining of neck and chest pain, Gosser said. No one else was injured.

Patrolman Jordan Perry conducted a traffic stop at Main and Jefferson streets for erratic driving at approximately 3:40 a.m. on Saturday. The driver of the vehicle, identified as Anna K. Perfect, 24, of North Vernon, was arrested for operating a vehicle while intoxicated-endangerment, possession of drug paraphernalia, possession of a controlled substance-two counts and possession of methamphetamine.

Senior Patrolman Aaron Watson conducted a traffic stop at Crozier Avenue and State Road 7 at approximately 8:35 p.m. on Sunday and discovered the driver, Chad T. Hester, 40, Madison, had an outstanding warrant out of Jefferson County for failure to appear in court. In addition to the warrant, Hester was found to be in possession of methamphetamine and paraphernalia and charged with both offenses.

At approximately 12:14 a.m. on Monday, Patrolman Cody Lewis was conducting a traffic stop at Third and Mill streets when investigating officers detected the odor of marijuana coming from a vehicle driven by Caleb Wilking, 28, Madison. During a probable cause search of Wilking’s vehicle, officers located more than 2 ounces of marijuana, a Level 6 felony possession.

Madison’s Board of Zoning Appeals Monday approved a conditional use permit that will allow a tattoo parlor that was most recently located near the end of the Milton-Madison Bridge to set up shop in the 400 block of Mulberry Street.

Owner Mike Anderson has either worked at or operated tattoo shops locally for nearly 30 years, most recently in a small store front located at the end of the US 421 bridge on the west side of Harrison Street until work on the US 421 Gateway to Madison shuttered the shop and other nearby businesses. Anderson has rented that building, which began life as a gas station but has served as numerous other businesses over the years, for past seven years and said when the owner opted to sell the property he decided to look for other options.

Anderson now plans to locate his shop at 408 Mulberry Street and provide services for up to seven tattoo artists including two full time and the others by appointment. He noted he has operated two other studios on Mulbeery Street so the move is sort of a homecoming for his business.

The new location is much larger than Anderson’s old studio and he said given the current COVID-19 pandemic will provide a safer facility for social distancing. The facility cannot open until it passes Jefferson County Board of Health inspection, a process Anderson was waiting to begin until after receiving zoning approval.

Zoning appeals board members noted that the city’s current zoning ordinance does not specifically address tattoo studios but that a section on “new and different kinds of businesses” has been used to allow such conditional uses in the past and granted Anderson a one-year permit to operate at the site.

“Mr. Anderson has a good track record and has been in business a long time,” noted board member Rick Ferris, adding that with the area zoned business, the parlor should be a consistent use of the property.

Anderson said he plans to reglaze windows and touch up the paint on the building prior to opening.

In other business, the board approved several renewals without objection, granted a new application for a zero lot line setback at 613 Mulberry Street for the purpose of building a rear porch on a home that is already built on a zero setback lot, and tabled an application for a development variance seeking to divide a .418-acre parcel at 1938 Michigan Road into three lots for residential housing bordering Sunrise Golf Course.

Monday’s meeting was conducted via Zoom. The board’s next meeting is scheduled for Jan. 11.

The City of Madison Fire and Police Departments are teaming up with Santa this year to do a neighborhood parade on Friday and Sunday starting at 6 p.m.

Santa will board one the Madison fire trucks.

The parade will be driving slow, but not stopping. The routes for parade viewing are:

Beginning at the parking area on Vaughn Drive near Bicentennial Park, the route to be followed is: West on Vaughn to Vernon, West on Second to Cragmont, North on Cragmont to Third Street, West on Third Street to Jefferson, South on Jefferson to Second Street, West on Second Street to Cragmont, North up Hanging Rock Hill to Green Road and East on Green to Wolf Trails, Wolf Trails to Franklin, Franklin to Wells Drive, Wells to Lanier Drive, Lanier to Osage, Osage to Shawnee, Shawnee to lroqouis, lroqouis to Seneca, Seneca to Clifty Drive, Clifty Drive to Cypress, Cypress to Crozier, Cassidy to Valley, Valley to Basswood, Basswood to Oakhill, Oakhill to Lanier, Lanier to Magnolia, Magnolia to Tiger Lilly, Tiger Lilly to Lanier, South on Lanier to Cross Avenue, Left on Cross to Wilson, Left on Wilson to Banta, Right on Banta to Hendricks, Left on Taylor to Eighth Street, Right on Eighth to Allen, Right on Allen to Highland and Right on Highland to Cragmont where the route ends.