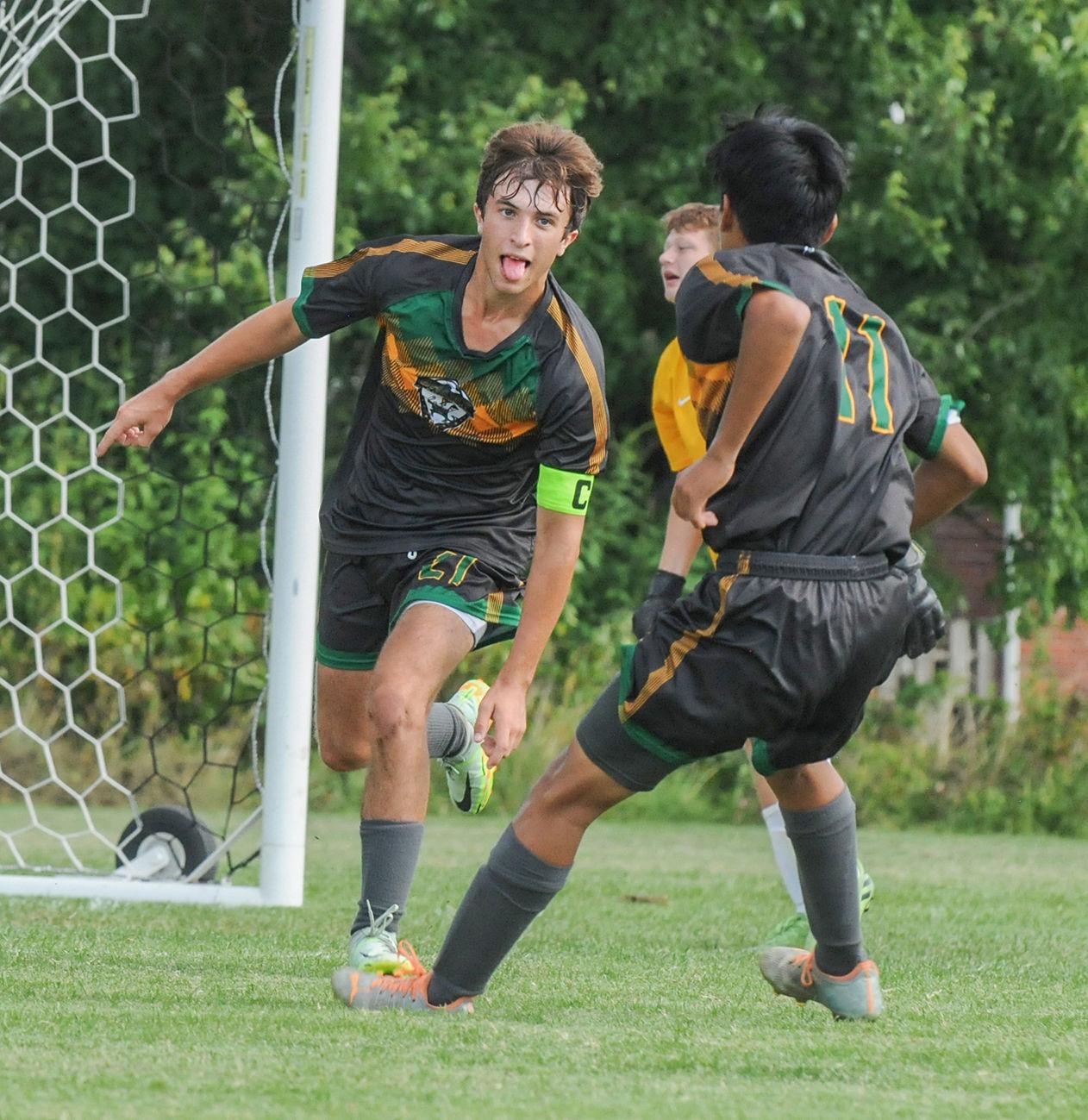 Shawe’s Jacob Hertz (21) celebrates with teammate Oswaldo Reyes-Miranda after scoring the second of his three goals in the Hilltoppers’ 5-0 win over conference rival South Ripley on Wednesday.

The most recent designs for the proposed Super Overlook on Vaughn Drive in downtown Madison are shown.

With enough funding finally in place to move forward with construction, work will soon begin on the $2 million Super Overlook proposed by the Madison Riverfront Development Committee (MRDC) on the Ohio River.

The MRDC has now raised $745,000 for the project, first proposed in the summer of 2020, through fundraisers and private and public donations, and announced this week a huge commitment by steel manufacturer Nucor Corporation to provide all of the steel needed for construction.

J.D. Webster, MRDC treasurer, said the $745,000 in confirmed financial support includes $220,000 raised through MRDC fundraisers for the design, renderings and main construction plans for the project. The other funds include $250,000 grant from the City of Madison’s Redevelopment Commission, a $150,000 pledge by Arvin Sango, a $25,000 grant from the Community Foundation of Madison and Jefferson County, and a $100,000 allocation by the Jefferson County Commissioners.

“It’s a huge success story and gigantic testament to our community to raise this much money in the midst of COVID,” said Webster. “And a huge testament to the community that sees the vision of what the future can be.”

Webster said bids have been received for the project and the committee is in the process of reviewing them to determine which contractor will do the work. Construction is anticipated to begin in September and be completed by June 1 before next year’s Madison Regatta.

Webster said the plan to develop the Super Overlook initially began as an effort to replace the Madison Regatta judges stand on the Ohio River, but the Riverfront Development Committee had grander plans. “It quickly morphed into ideas that would be a multi-purpose venue that could be used year around by all residents of Madison and Jefferson County for fundraisers, festivals, concerts, weddings, prom pictures, bass tournaments, car shows, Ribberfest and just plain daily use.”

Webster said the Super Overlook will “be for everybody, and it will be free” for the public to use. “Every day somebody’s going to sit there, and look at the Ohio River valley, and be in awe of what we get to be a part of everyday.”

“It will be the crown jewel of our riverfront when it’s built,” Webster said.

He noted that being able to use scrap-based recycled steel from Nucor in the construction “will allow the project to be built in the most sustainable way possible.” Nucor, North America’s largest steel producer and largest recycler, operates a tubular products facility in Madison and a steel mill in Ghent, Kentucky, which both employ a number of Madisonians.

“Nucor is proud to partner with the community on this exciting project,” said Nicki Taylor, general manager of Nucor Tubular Products. “Madison isn’t just a place where our Nucor teammates come to work every day, but we also live here, shop here and send our children to school here. This project will be something we can all be proud of.”

“This is going to be lit up at night,” Webster said, which will provide safety and security when it’s dark but also provide a convenient space to visit the riverfront and view the Ohio River.

There will be two telescopes mounted on the top observation deck of the Super Outlook. Webster said multiple donors at MRDC’s 2021 Wine Stein and Barrel event contributed $12,000 for the new telescopes including two additional new telescopes for other locations on the riverfront to add the existing one telescope.

Building Analysis Services of Hanover, owned and operated by Josh Kunze, has developed drawings for the Super Overlook.

A member of the Riverfront Development Committee and lifetime Jefferson County resident, Kunze said using some of his knowledge and expertise to help develop a good plan for the Super Overlook is an opportunity to “give back and be a part of” a worthwhile project. “This is my home,” he noted.

The Madison Riverfront Development Committee has been the driving force behind multi-million dollars worth of improvements and beautification on Madison’s riverfront since the group was formed in March 1986. The committee started with a brick walkway on Vaughn Drive across from the Lanier Mansion and Crystal Beach swimming pool. By 2020, the committee had completed the 1.5-mile riverfront walkway extending from the Heritage Conservancy on the west to the city campground on the east with additional benches, lighting and overlooks.

“The primary focus of the organization is to protect the past while enhancing the future,” said Webster.

Jim Pruett serves as the organization’s president and John Bruns is vice president — both who have been on the committee for more than 20 years — while Bob Wall has served on the committee all 36 years. Other committee members besides Webster and Kunze include Kirk Grooms and Jeannie Stotts. Mandy Finney is the office manager for the committee.

Anyone who would like to contribute to the Super Overlook project — or the Madison Riverfront Development Committee in any way — can email madisonriverfrontcommitte@gmail.com or call 812-599-2000. MRDC will continue its fundraising for the Super Overlook and other needs through its annual Golf Cart/UTV Poker Run on Saturday, Oct. 1.

A comprehensive update of Madison’s historic district guidelines — perhaps years overdue and actually many months in the making — was sent to Madison City Council earlier this week with a recommendation by the Madison’s Historic District Board of Review.

If adopted by the Council, the 158-page document will replace an ordinance adopted in 2006, and become the new guide for historic preservation in Madison’s 600-acre downtown National Historic Landmark District involving 133 city blocks and more than 1,600 historic structures.

Over the past several months, the guideline has undergone a line-by-line review by staff, consultants and board members to determine what areas need updating, if there are new areas that should to be included or old areas that can be dropped. The overall document will be a roadmap for historic preservation with written guidelines, photos, diagrams and maps for protecting and preserving the city’s historic homes and businesses. The document details the various architectural styles seen in Madison and the appropriate materials, techniques and other technical information required to renovate, repair and preserve them without damaging their place in the historic district.

The project also included a new survey of the entire historic district to determine if structures have been lost to fires and other disasters and/or renovation mistakes where buildings may no longer be contributing to the historic district.

Among the updates included are guidelines on new materials now considered appropriate for use in the district that did not exist when the existing document was compiled and approved. Efforts were also made to simplify and streamline some aspects of the document including elimination of separate design standards for residential and commercial structures in favor of a single guideline that considers structured based more on its history rather than use.

The guideline was approved 5-0 by the board with Josh Wilber absent. Nicole Schell, director of planning for the city, said the proposed ordinance will now go to city council for a first reading at the Tuesday, Sept. 6 meeting. A second reading could then take place on Sept. 20 at which time the council would receive public comment on the proposal.

News
Wallace last to file for school board before deadline

New school board filings over the past week have created contested races for all seats up for election for Southwestern Jefferson County Schools and one of the three seats on the ballot for Madison Consolidated Schools.

Madison Police Chief John Wallace filed his candidacy for Madison School Board District 2 (must live in precincts 4-1, 4-1A, 4-2, 4-3, 5-1 or 5-2) Friday morning as the last candidate to enter the November election by the noon deadline on Friday.

Wallace’s filing created a four candidate race for two seats on Madison school board. Incumbent Lori Slygh had filed her candidacy on Wednesday with incumbent Jodi Yancey and Zackery Shelton both entering the race earlier.

For Southwestern, the new filings created a scenario totally opposite of 2018 when candidates ran unopposed for all three seats. This year all three incumbents face opposition.

Meanwhile, Michael T. Scott filed early in the month for Madison District 3 (must live in precincts 1-1, 1-2, 2-1, 2-2 or 3rd ward), but will face no opposition in the general election. Larry Henry, the current incumbent, chose not to seek reelection.

Voter registration is currently open and will be until Tuesday, Oct. 11. Early voting will begin Oct. 12 at satellite locations that include the Jefferson County Courthouse, the Jefferson County Public Safety Center and the Hanover Community Building. The general election 6 a.m. to 6 p.m. on Tuesday, Nov. 8.