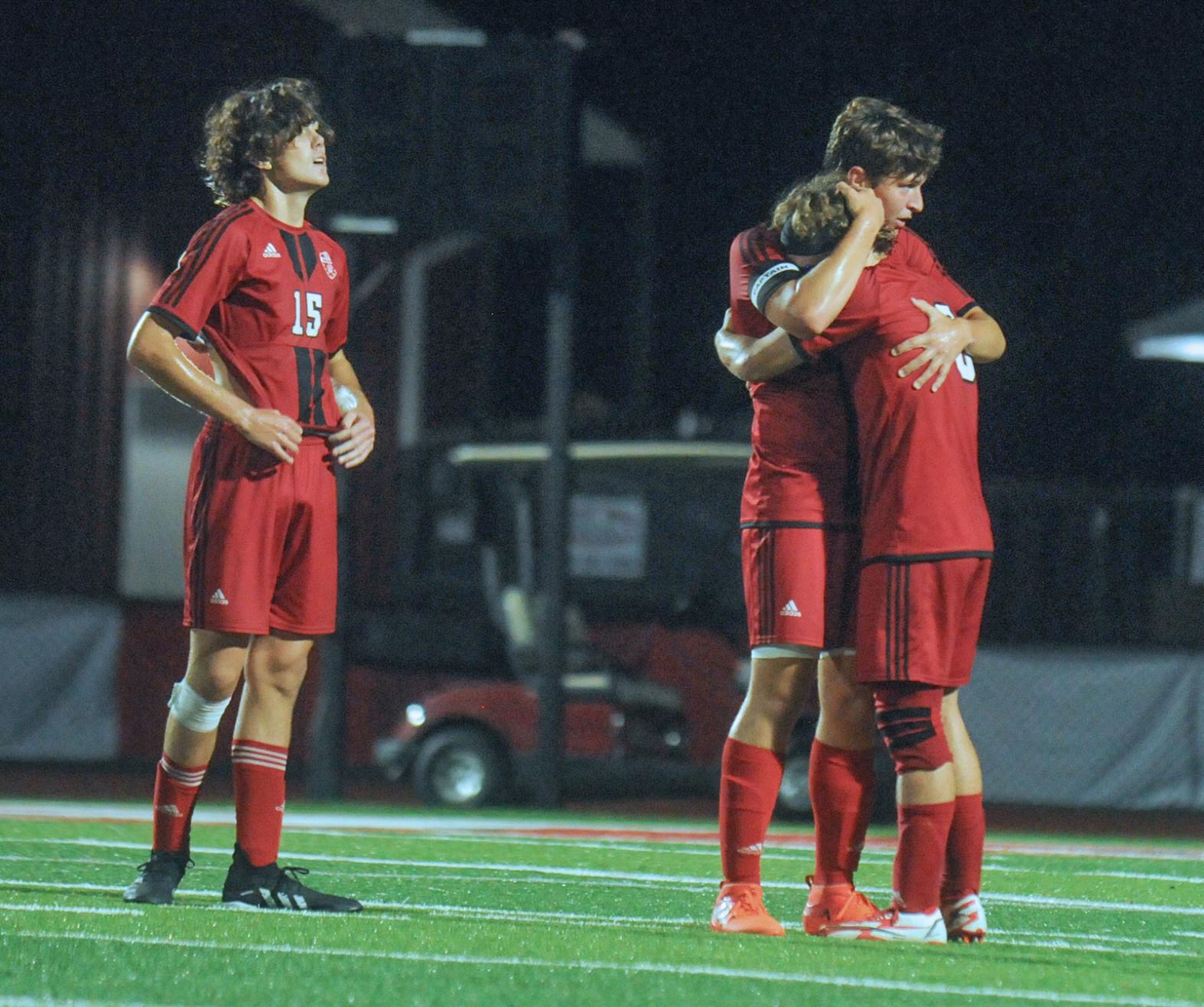 Second half goals doom Madison in loss to Heritage Hills

News
SuperATV invests in Madison with big plans for expansion

SuperATV has announced big plans for expansion in Madison and the first step in the process of growing that economic development began at Thursday’s Madison Redevelopment Commission meeting with the adoption of an amending declaratory resolution.

“SuperATV has been a fast-growing company and we’re excited to see them do a couple of things,” said Madison Mayor Bob Courtney. “One of those things is invest, but to invest seriously in Madison.”

The overall capital investment for SuperATV projects is anticipated to be $71 million. Mike Flint, of Ice Miller, spoke to the board on behalf of SuperATV, noting there could be 250 to 370 new jobs created over the next five years depending on acquistions by SuperATV.

Flint said there is “a lot of activity” going on related to acquisitions including “very aggressive” efforts for several to make Madison their headquarters as part of the transactions. “It will also bring all their equipment here, and control of their patents and licenses, etc,” he said.

The expansion of SuperATV would involve the plant at 2753 Michigan Road, with a new 120,000 square foot production/warehousing/logistics facility next to that building. Flint said the new facility could be completed by next year, but the first quarter of 2023 is more likely.

In addition to that expansion, another 100,000-square-foot expansion is being considered but may be delayed “due to the nature of steel costs and construction,” said Flint.

He said there are also plans for additional development at the 1200 Clifty Drive Armor Plastics facility including an Innovation Center to develop new product lines, do quality control analyses, and product testing.

Basically, the resolution moves forward a process for creating two TIF (Tax Increment Financing) areas in which the City Council will vote to adopt a bond ordinance in December. The next step in the process will be to seek approval of the resolution from the Plan Commission at its Nov. 8 meeting.

“This is very exciting,” said Commission chairman John Grote. “It’s great the company is making the investment in Madison, and chosen Madison to continue to expand.”

“Our workforce and destination development plans are very ambitious and transformative. I’m very grateful for all the collaboration between the city, our redevelopment commission and SuperATV in taking the first step in the process to bring significant investment and jobs to our community,” said Courtney.

In other business, the MRC:

• Approved a subdivision plan on 12 acres of land the Redevelopment Commission owns on the west side of Shun Pike that’s part of the Madison Industrial Park. “We get inquiries about smaller parcels,” said Courtney, who noted the plan is to subdivide the acreage into four parcels ranging between two and four acres.

Courtney said the next step is to go before the Plan Commission to create the subdivision and to record the revised plat. Those parcels can then begin being offered for sale individually. The city would establish perimeters for what type of businesses would go there.

• Courtney reported that the city is in the process of planning how to spend $2.4 million in American Rescue Plan funds.

“A lot of it is going to be dedicated to stormwater infrastructure” since two flash flooding events have occurred in the city in the last six years, said Courtney, adding the city is also working through a rate analysis on an estimated $15 million drinking water infrastructure project.

• Courtney reported that work on a downtown parking study is being done this week with plans to have that completed by the end of November. “That will provide some really useful information for us from a policy perspective of where we need to invest and how much we should invest in parking,” he said, adding there are parking constraints in downtown Madison and they are working to determine how best to manage the parking.

• Negotiations continue on bringing a grocery to downtown Madison. Courtney said about six prospects have been identified and a new marketing package is being prepared to attract potential grocery store operators. “That still is our number one downtown Madison priority. It is a key ingredient with our Destination Madison development plan” that was part of what the Our Southern Indiana Regional Development Authority submitted in its application for the READI (Regional Economic Acceleration Development Initiative) grant. Courtney is hopeful the city will receive funding through the READI program, which if allocated to the region “will help us to hone in on our development strategies for the next few years.”

• Courtney said recruitment continues for a new Economic Development executive director. “We have the job posting out on several economic development-related platforms. We will keep you posted as those resumes come in,” he said. 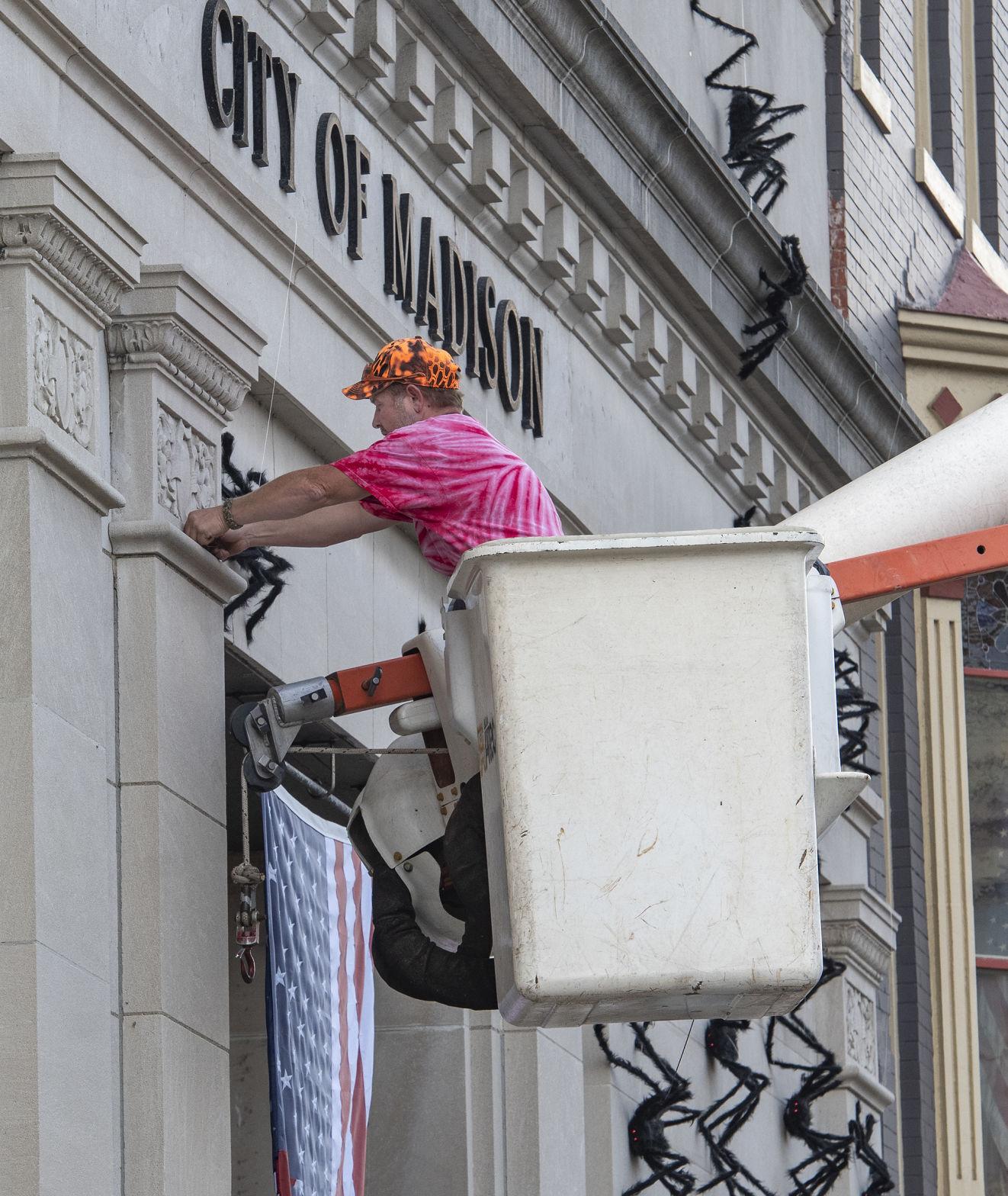 Madison city employee Trevor Snyder (pictured) was the city’s version of Spider-Man as he used a bucket truck to decorate Madison City Hall with spiders for the Halloween season.

News
Trimble death count due to COVID-19 increases by 3

The local COVID-19 death toll increased by three in Trimble County based on a report Thursday by the Kentucky Public Health Department.

So far during the pandemic 14 Trimble County residents have died related to the coronavirus. There was no change in death totals in Jefferson County, which has had 95 die during the pandemic, or in Switzerland County and Carroll County with 11 and 23 deaths, respectively.

She said booster doses for Moderna and Johnson & Johnson are still awaiting final approval from the Centers for Disease Control Advisory Committee on Immunization Practices (CDC ACIP). The CDC ACIP is scheduled to meet on Oct. 20 and Oct. 21 to issue recommendations.

Once the Jefferson County Health Department receives official authorization from Indiana Department of Health, Monroe said the health department will begin administering booster doses, which she speculated could be as early as next Friday.

Once booster doses for Moderna and Johnson & Johnson are approved walk-ins will be accepted at the Jefferson County Health Department, 715 Green Road, Monday through Friday, 9 a.m. to 3 p.m. or you may schedule an appointment for a booster by visiting www.ourshot.in.gov Anyone needing assistance in scheduling an appointment you may call 211 or 812-273-1942.

Earlier, this week, Jefferson County passed the 5,000 threshold for positive cases of COVID-19 and now has had 5,046 during the pandemic with 69 cases in the last week. Jefferson County’s positivity rate is currently 8.5%. Switzerland County, which had five new cases of COVID-19 in the last day, now has had 1,339 cases during he pandemic. Both counties remain in “Orange” for medium to high spread.

In Trimble County, the positivity rate is 9.71% while the rate in Carroll County is 15.94%. Both counties remain in “Red” for high spread. Trimble had six new cases in the last day for a total of 1,158 during the pandemic while Carroll had eight with an overall total of 1,823.

County Auditor Heather Huff said the amount for the animal shelter may change slightly as the Council reviews the line items in the budget, but made the total enough to address whatever the Council decides on those items.

Crozier noted they set an appropriate number “hoping that the adjustments that we have to make will fall within that number so we don’t have to come up with something magical later.”

Huff said the General Fund provides enough money to accomplish that while remaining less than the advertised amount.

A budget adoption meeting is scheduled for Monday, Oct. 25, at 5 p.m. Once adopted by the county, the budget must still be finalized by the Department of Local Government Finance (DLGF).

The Council also approved a budget of $77,490 for Saluda Township. Township advisory boards typically approve their own budgets but Huff said the DLGF required the County Council to approve the budget because the township trustee has a relative on the board while there is also a firefighter — the budget provides funding for the fire department — serving on the board. The two potential conflicts constitutes a majority of the advisory board, invoking the requirement for approval by the Council.

In other business, the Council:

Council member Judy Smith reported that Weir’s salary is being increased to $40,000 due to all the extra time she’s spending traveling to homes and performing additional duties. Additionally, she said the budget will provide for hiring a part-time person for 28 hours at $16.50 per hour, which amounts to $24,024 annually. Smith said everything else was left the same in the Veterans Service Office budget.

Crozier said that still needs to be approved by the state, but “we should know by the end of the year.” She said there have been a number of compliments received concerning the service Weir has provided in Jefferson County and surrounding counties both in Indiana and Kentucky. “Congratulations on what a fine job you do for our veterans,” said Crozier.

“I truly appreciate it,” Weir said. “We’ve grown the office and are so busy” and to “get someone else on there as close to full-time as possible is very much appreciated.”

• In preparation for completion of Jefferson County Sheriff’s Office and Criminal Justice Center in 2023, Crozier asked the Commissioners whether a decision had been made on which water company will provide water for the new facility — Madison or Dupont.

Commissioner David Bramer said he has not yet heard back from Dupont Water Company, which he said has hired a consultant to determine what the appropriate water rate would be. Bramer said officials at the construction site have indicated there is currently sufficient water from Dupont to do the work needed; however, a 12-inch water line will be needed as construction nears completion.

Council member Chris Shelton said Dupont is seven months past due in quoting a water rate. “I think it’s time to push the ball a little further along. I understand the agreement and their requirements but I would think in seven months, you can form a committee and get a lot of things done. I don’t know why it’s taking this long.”

“I think they’re being fair with us because they don’t have a customer that uses this amount of water,” Bramer said. “They don’t want to charge too much but at the same time they want to find out what a correct charge would be.”

• Nick Schultz, president of the Cemetery Board, requested $5,000 to do work on Craig Cemetery east of Michigan Road and Miner Cemetery east of Wilson Avenue just south of Clifty Drive. Schultz said both cemeteries have been unattended and are “full of trees” with some fallen and hitting stones, so “we’re trying to cut as many as we can to avoid that problem.” The Council approved $3,000, but the rest must be advertised before it can be approved, which the Council plans to do at the November meeting.