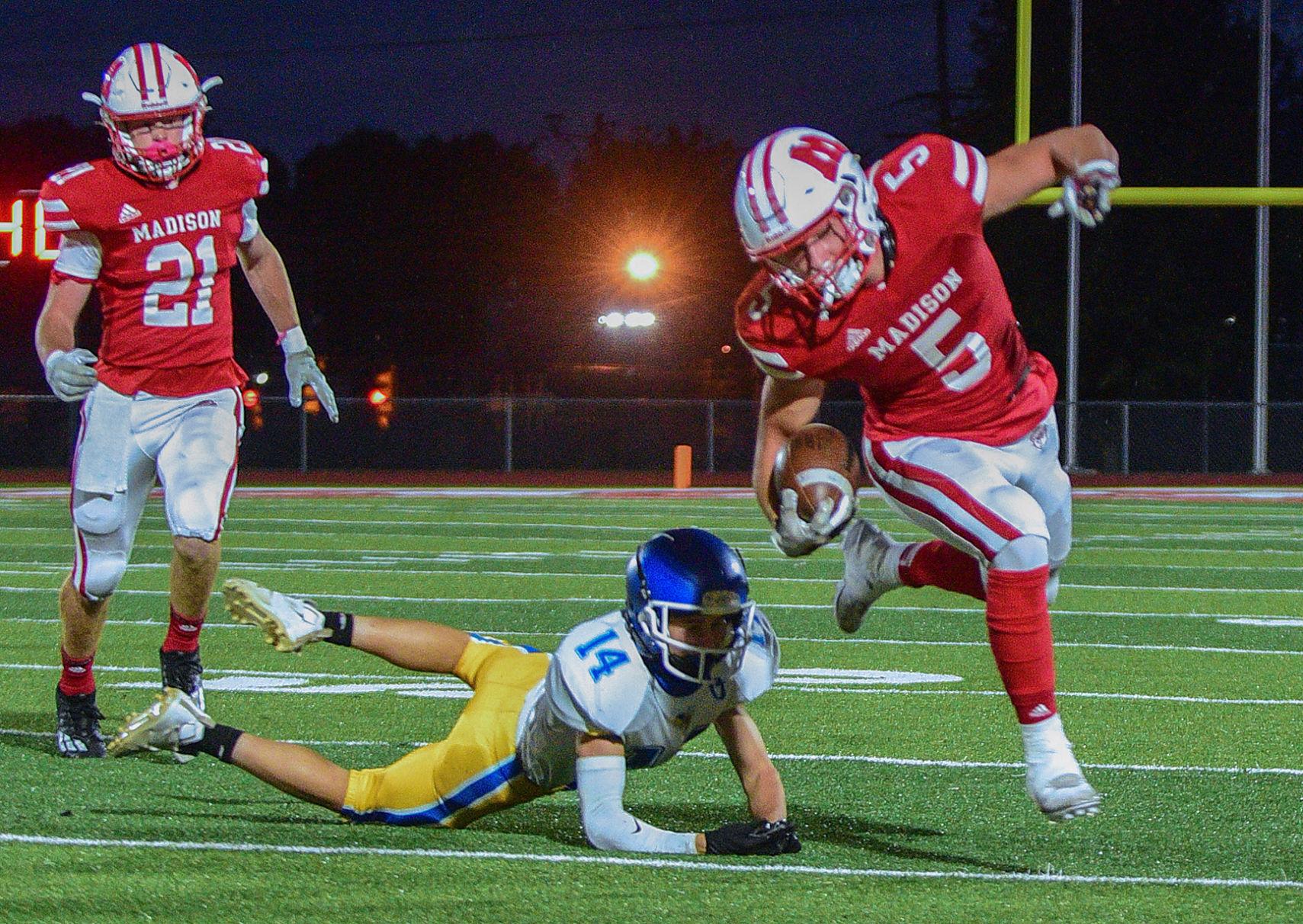 Madison’s Colin Yancey (5) leaps over Mitchell defender Ashton Luman (14) during Friday’s game at Cub Field. Yancey scored two touchdowns and had more than half of the Cubs’ yards in the 30-13 win.

Broadway Street in Madison — and most other streets in the festival area — was packed with visitors on Saturday and Sunday as huge crowds turned out for the 2022 Madison Chautauqua Festival of Arts.

Gene and Bill Bowen, of Charlestown, were honored as the Best of Show artists at the 2022 Madison Chautauqua Festival of Arts.

Daphne Hall, of Madison, creates colorful bubbles, flowers and butterflies while doing chalk drawings Saturday in the kids area of the Madison Chautauqua Festival of Art.

Rob Houze and his bandmates were one of the many groups and soloists performing live music for festival goers.

While there’s no way of knowing exactly how many people attended last weekend’s Madison Chautauqua Festival of Art, downtown Madison was jammed with visitors and it definitely felt like one of the largest crowds in the 51-year history of the event.

Early morning rains on both Saturday and Sunday mornings were over well before the Chautauqua opened at 10 a.m., giving way to sunshine and comfortable temperatures the remainder of each day and wall-to-wall crowds blanketed the streets lined with artists booths and sidewalks throughout downtown.

Because there is no gate admission to the Chautauqua, there’s no way of measuring attendance. But Saturday’s crowd, in particular, was large enough to produce overflow parking on all streets from Cragmont to East streets, even as the shuttle buses were transporting many Chautauqua patrons from the Madison Consolidated High School parking lot.

Wall-to-wall patrons browsed booths of artists and craftsmen while numerous bands performed live music at various venues throughout the festival area and around a massive food court on Broadway and Vaughn Drive.

“It was amazing. It was busy really even before 10 a.m.” on Saturday, Chautauqua coordinator Kara Hinze said. “It felt like it was one of the busier years.” Hinze added that early feedback from the artists was that sales were very strong.

To see everything come together for a successful Chautauqua is “very gratifying,” said Hinze. “It’s very exciting to see all the people and smiling faces, and see people enjoying the music and hanging out.”

She said it makes all the hard work worthwhile when Chautauqua weekend becomes a time to just enjoy everything that the committee works toward in planning the event throughout the year. “When you see things starting to come together, it’s a whole different level of excitement and it renews your energy for the festival. They’re long days but they’re fun,” Hinze said, adding that Chautauqua couldn’t happen “without the committee and all the volunteers.”

Artists Bill and Gean Bowen, of Charlestown, who make pottery and clay sculptures, were this year’s Best of Show winner. They have been periodically coming to Madison Chautauqua for more than 20 years including last year when they placed third in the Fine Art category. Bill Bowen said to win Best of Show “sure is a really good feeling.”

The Bowens have been married 28 years after meeting as students at Indiana State University, where they both earned Master of Fine Arts degrees. They collaborate on their art, both doing the parts that they like the most. “I do the throwing, and make the forms, and my wife does all the carving and all the glazing,” said Bill Bowen. They both enjoy coming the Chautauqua.

“We the love town and it’s beautiful,” said Gean.

Living nearby, the Bowens are frequent visitors to Madison, often coming to Clifty Falls State Park to hike, and just walk around Madison. “We’ve even kicked around the idea of moving here a couple of times,” he said. “We just love Madison.”

The award for Best Presentation went to Walter Dill and Monica Uhl, of Jeffersonville, with their handcrafted hardwood furnishings and jewelry business, named DillUhlsional. Dill said Madison Chautauqua is actually the

first art show in which they’re participated. “We’ve heard a lot about this show and it’s a quality show,” he said of the juried event.

Dill said he began doing woodworking in the early 1980s, but backed away from the craft after cutting a finger in the 1990s, and instead made a living doing non-competitive partner dance. When the COVID-19 pandemic hit in 2020 he wasn’t able to do dance, he turned that into an “opportunity” by focusing totally on design, along with Uhl.

India Cruse-Griffin, last year’s Best of Show winner, placed first in Fine Art, and was surprised to be highly honored in back-to-back years. “I’m floored,” she said, noting the two years are the only times she’s participated in Chautauqua. “It’s been very, very exciting. I really am in shock. I always do my best but I do my work because I love what I do.”

Cruse-Griffin said she appreciates the endorsement of work given by the Chautauqua judges. “That really does make me feel good about my work,” noting that by nature she’s always uncertain how others will react to her art. “You do work, you spend all those hours in the studio and you hope somebody likes it. But for me every single time I do art is like putting art on the refrigerator for my mom. If I put my art on the refrigerator and my mom goes by and says she loves it, then I feel really good.”

A resident of Richmond, Cruse-Griffin came to Chautauqua through the encouragement of her cousin, Cindy Porter, and her husband, Matt. It’s the only art show that she brings her work. “I loved it so much here last year that I would come back again,” she said. “These are some really great people ... It’s been a pleasure.”

“We were very surprised and pleased,” said Eilermann, noting it was their first time participating at Chautauqua. “We’ve heard a lot about the show and have a number of artists that do this show, and they said it’s a good one.”

Eilermann noted their work is evolving with each of them creating their mosaics in different ways. Farrell works with handmade tiles while Eilermann creates hers using broken dishes. Eilermann said she developed her interest in broken dishes because she “saw someone years ago that used that medium and I thought it looked neat. I started looking at dishes, and realized how many colors and patterns there are in dishes.”

The 52nd Madison Chautauqua Festival of Art next year will be Sept. 30-Oct. 1.

A 13-year-old Jefferson County girl died from injuries she sustained in an off-road vehicle accident on private property near Smyrna on Saturday.

Jersie Sever, of Canaan, was a passenger in an off-road vehicle that was doing evasive maneuvers in a yard when the vehicle tipped over on its passenger side while making a hard left turn.

The crash took place at about 5:09 p.m. on Saturday just off the 1600 block of North County Road 600 West between West Chicken Road and West Interstate Block Road.

The cause of the accident and other details are still under investigation and additional information will be released as it becomes available. 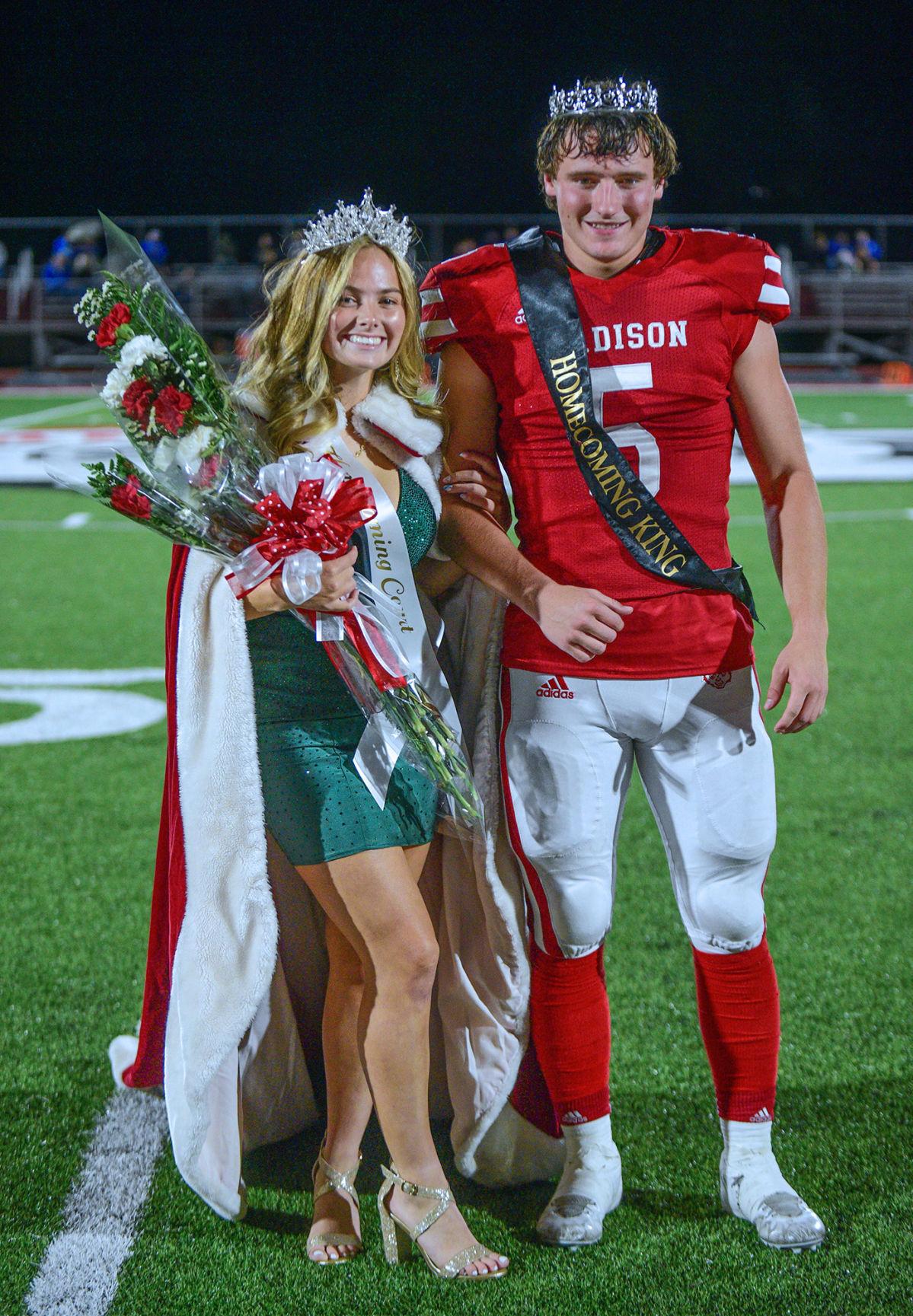