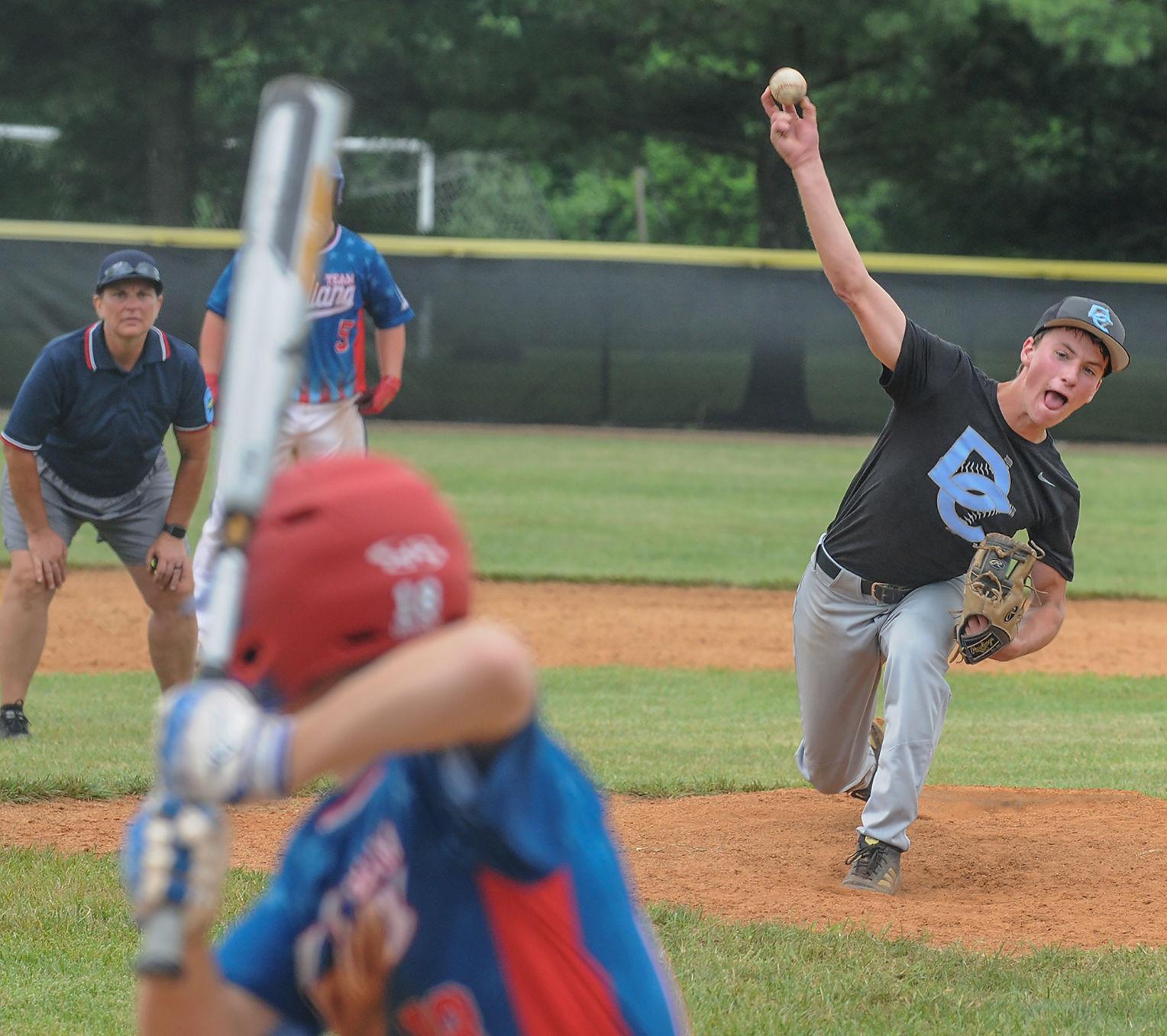 The Reserve Grand Champion Steer at the Jefferson County 4-H Fair was sold by Bryton Wehner to Craig Toyota for $4,400. Pictured (from left) are Greg Sanders and Joe Craig of Craig Toyota, Eden Wehner and Bryton Wehner.

There were challenges going into this year’s Jefferson County 4-H Fair — with lingering uncertainty over the COVID-19 that canceled the event in 2020 — and then heavy rain throughout fair week added even more challenges for fair participants.

But nothing could stop the event from being a success. And, in the end, it was a great week.

“I am impressed with all the hard work that all the 4-H’ers put into it,” said Britt Copeland, Jefferson County Purdue Extension Educator.

The record sale was achieved with the fewest total animals sold in at least the last 15 years. There were 142 total animals in this year’s auction, which accounted for a record-setting average price per animal of $1,874.30.

“The community really stepped up,” said Scott Hubbard, president of the Jefferson County Fair Board. “The cost per animal and overall total was by far the best-ever.”

Copeland said last year’s fair being cancelled due to COVID-19, and the uncertainty of a fair in 2021, impacted the number of animals that were at the fair and available for the livestock auction.

“4-H is a year-long process,” Copeland said, noting that raising the animals “starts way before the fair,” and in January and February, there was enough uncertainty about whether there could be a fair that some 4-H youth opted to prepare fewer animals. Copeland praised the work of the fair board in pulling it all together to not only make it possible for this year’s fair to happen, but to also make it a success.

Hubbard said the record totals for this year’s livestock auction “will bring the numbers back next year” and rebuild the livestock participation by youth in 4-H.

In addition to the livestock total, an additional $14,376 was raised from a goat cheese basket that was purchased by multiple buyers. Those proceeds will go into the 4-H Scholarship Fund at the Community Foundation of Madison and Jefferson County.

Another $2,400 was raised through the sale of a bench in memory of Tyler Cooley, a 10-year 4-H member who died in an automobile accident in 2020. The bench was purchased by Gary Goode Trucking, of Nabb, a proceeds will be used to help send youth to 4-H camp.

Combining the livestock, the goat cheese basket and bench, the total raised at the auction was $282,926. In addition, 35 of the animals purchased were donated to the House of Hope Food Pantry to provide meat to food insecure families in Jefferson County including one beef, 22 swine and 12 sheep.

Klara Leach’s Reserve Grand Champion Meat Goat was purchased by the Leach Family for $2,000 and Michael Briggs raised the Grand Champion Dairy Goat, which was not included in the livestock auction.

Of the 142 animals in the livestock auction, 19 were beef, 80 were swine, 39 were sheep, and four were from specialty categories.

A major drinking water infrastructure improvement project was moved forward by the City of Madison Monday when the Board of Public Works and Safety agreed to support amending the city’s existing contract with Commonwealth Engineers Inc. to include design engineering at a cost of $1,545,000 to be done by the end of the year.

The motion was made with the stipulation that the city receive money from a State Water Infrastructure Fund (SWIF) through the Indiana Finance Authority.

“It has been approximately two decades since our infrastructure has been upgraded,” said Madison Mayor Bob Courtney. “Not only are our storage tanks deteriorating and needing maintenance but our water treatment plant and more than 22,000 linear feet of water distribution lines need replaced.”

Brian Jackson, utility manager, noted that during the past year the city has been working on a water rate study to determine what water rate increase will be needed to address the upcoming water infrastructure improvements and rehabilitation.

Jackson estimates the project will cost $15 million, which he said the city is hopeful to offset by additional funding resources including a SWIF grant application that is being sought in the amount of $5 million.

“Once the SWIF people vet all of the applications, we hope to receive all or a portion of this amount,” said Jackson, but that won’t be known until it is announced, which Rob Bellucci, project manager for Commonwealth Engineers, anticipates will be sometime in August.

The city will also reach out to Jefferson County asking for $2.5 million in American Rescue Act funds from Jefferson County in hopes of keeping water rates as low as possible for residents of both the city and county.

“The City of Madison not only provides water in and around Madison, but we provide the water to Dupont Water, Canaan Water and Rykers’ Ridge Water companies,” said Jackson. “In essence, we provide water to approximately two-thirds of the Jefferson County residents.”

Jackson said that once the grant amounts are finalized, the water rates will be determined from a revised rate study that will be done.

In other business, the BPWS:

• Endorsed a resolution that will be presented at Tuesday’s Madison City Council meeting related to the flooding on June 18 that negatively impacted certain areas of the city, particularly North Walnut Street. The resolution states that in the affected area trash and debris removal and water service will continue to be provided for some residents. There would be no discontinuation of water services for the next six months for those who reside in the affected area and have completed a disaster intake form with the city. In addition, all who reside or operate a business in the affected area may have their water, sewer and trash fees waived from July to the end of this year. The resolution would also remove fees for all building permits.

The resolution also emphasizes that the city is exploring all resources to assist with future mitigation of a disaster as what occurred June 18.

In his comments at the end of the meeting, Courtney said work toward future mitigation is complicated and multijurisdictional. “It will be expensive and will take a lot of time, but we’ll be better in the future for the action we’re taking today that had not been previously explored.”

• Approved an American Institute of Architects (AIA) contract to submit for review by the City Council for the Crystal Beach pool project that was awarded to Poole Group. Ed Curtin, of CWC Latitudes, representating the Stellar program, said it’s a process of being sure “all the T’s are crossed and the I’s are dotted,” and all the documentation is set.

Courtney said Crystal Beach is scheduled to close July 31 so that work can begin. “We wanted to get it started for a grand reopening in 2022 of the new Crystal Beach,” he said.

• Agreed to remove a yellow”no parking zone” on Third Street at the Eggleston Community Building that had been placed there during thebuilding’s previous life as an elementary school. Madison Police Chief John Wallace said the no-parking zone had been put to provide space for school buses, and now with more residents living along that part of Third Street, it would be helpful for them to be able to use that area for parking.

The Madison Area Chamber of Commerce has set Saturday, Oct. 9, as the date for the 19th annual Soup Stew Chili & Brew Festival on Main Street.

This year’s cook-off competition will include live music, beer and wine gardens, shopping, and activities for both children and adults and serve as a fundraiser for numerous area nonprofits who operate booths featuring their best recipes.

“We look forward to hosting businesses and local non-profits back to Madison’s Main Street for the 19th Annual Soup Stew Chili & Brew Festival,” said a new release by the Chamber. “Soup Stew Chili & Brew will abide by all CDC safety regulations, and changes are being made to ensure the health and safety of all participants and visitors.”

More information will continue to be provided leading up to the event.

For additional information on this year’s Soup Stew Chili & Brew festival, sponsorship, or registration, contact the Madison Area Chamber of Commerce at 812-265-3135 or info@madison indiana.com.

Madison Mayor Bob Courtney has been selected to serve on a legislative committee for Accelerate Indiana Municipalities (AIM).

Accelerate Indiana Municipalities is an organization that fosters, promotes and advocates for the success of Hoosier municipalities as laboratories of innovation, hubs of talent and the engines that drive the state’s economy.

The committee was founded in the 1890s and was known as the Indiana Association of Cities and Towns until a few years ago. In 2017, the organization reimagined its role and purpose and evolved into AIM.

A priority of AIM is to focus on quality of place and to think boldly about what cities and towns can become. AIM collaborates with legislators, advocating for cities and towns on long-term issues and initiatives.

The organization also hosts a major conference and more than 100 training sessions and workshops annually.

“The priorities of AIM are right in line with our priorities at the City of Madison,” said Courtney. “We have a bold vision for the city and have already begun taking steps to position Madison for success well into the future. I appreciate AIM’s partnership with the city and their trust in our perspective as a member of the legislative committee.”

AIM’s membership includes mayors and municipal leaders from throughout the state. The board works to help shape the dynamic municipalities of the future and help ensure government works for all Hoosiers.

“I am eager to join the legislative team on behalf of the City of Madison and am looking forward to being involved in policy at a higher level,” Courtney said.

Currently, there are more than 460 member cities and towns in AIM. For more information about AIM, please visit aimindiana.org.