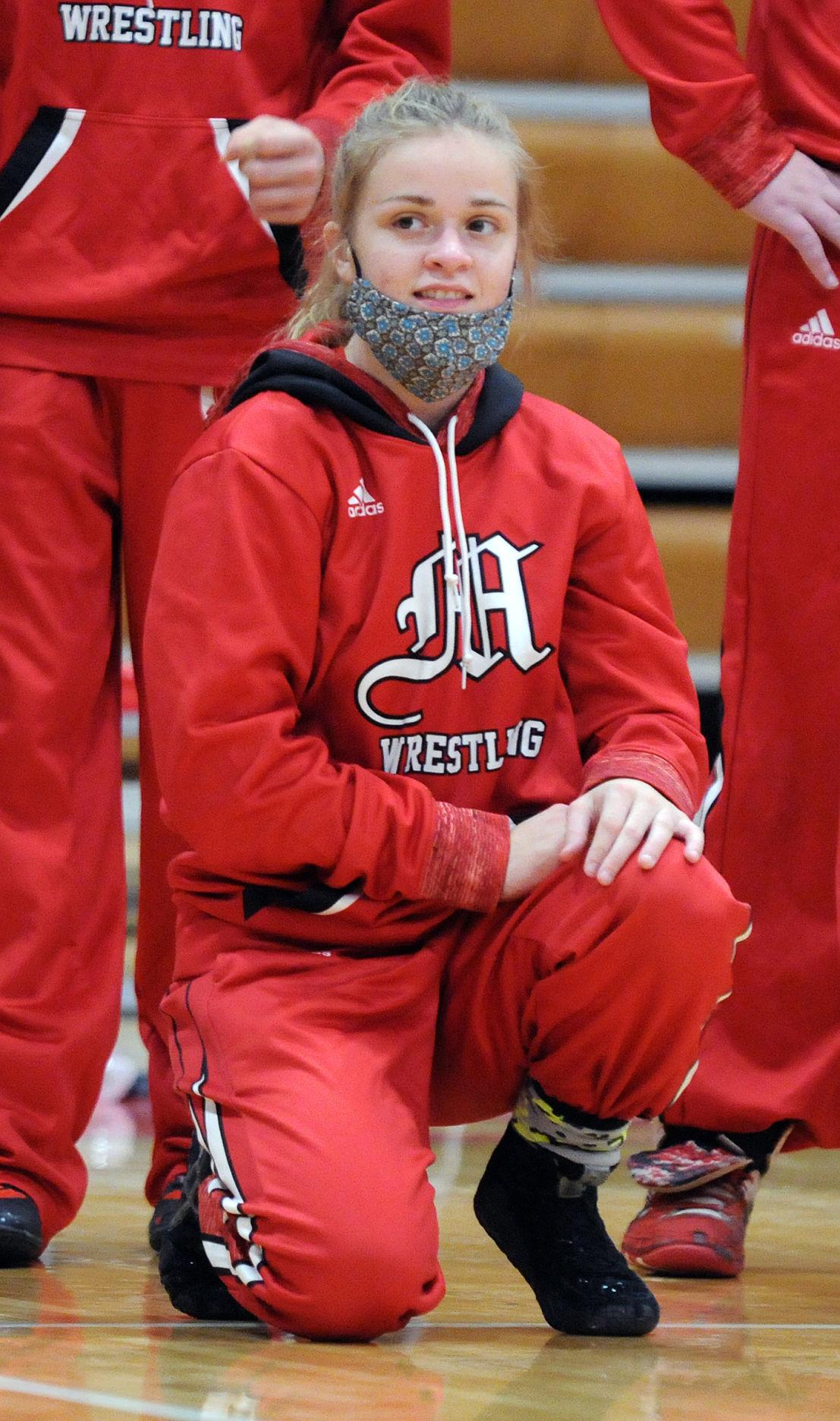 Madison senior Kelsey Bilz watches the action from the sidelines at a recent meet.

Dr. J. Richard Jones, of Madison, and the massive white oak he calls “The Sherman” on his farm out past Paris Crossing in Jennings County. Jones is the 2020 Indiana Deam Forest Stewardship award winner presented by the Indiana Forestry & Woodland Owners Association.

Dr. J. Richard Jones, of Madison, and the massive white oak he calls “The Sherman” on his farm out past Paris Crossing in Jennings County. Jones is the 2020 Indiana Deam Forest Stewardship award winner presented by the Indiana Forestry & Woodland Owners Association.

J. Richard Jones was driving the backroads of Jefferson and Jennings counties more than half a century ago — traveling to and from local farms during his career as a veterinarian — when he spotted a hilly plot of land that caught his attention as a possible peaceful and remote sanctuary from the demands and pressures of work.

The “For Sale” sign posted on the property was all the encouragement Jones needed to investigate the 60-acre plot and when the asking price was too good to pass up he quickly became the owner — and as it turned out steward — of what is now a little piece of heaven where mighty oaks, poplars, cherries and hickories reach for the sky, squirrels scamper among the branches and deer feed among the acorns and vegetation.

“I liked being outdoors and it’s a great stress reliever,” Jones said recently, noting it’s easy to forget about other things when you’re bushhogging or running a chainsaw.

“When I bought it in 1963 it was far from perfect — it was covered in broomsage and cedar trees — but over the years I’ve gotten rid of all of them,” Jones said. “We’ve taken out as much as we can of the invasive trees like cedars and the trees I call ‘wolf’ trees — those with crooked trunks — so now it’s a beautiful woods with high value trees that are straight and healthy.”

What for many years served as a release from his job doctoring sick animals ended up becoming one of the best managed forests in Indiana. In 2010 the farm was recognized as the best managed forest in the region by Historic Hoosier Hills Woodlands and earlier this year his woods was selected over three other state finalists as winner of the 2020 Indiana Deam Forest Stewardship award presented by the Indiana Forestry & Woodland Owners Association.

Jones, now 86, admits that in a business like forestry where a plot of trees may take 40 years to develop, an honor like the Deam Forest Stewardship is kind of a lifetime achievement award.

Along with enjoying the farm for its recreation and remote tranquility — there’s great wildlife watching and hunting, a stream for fishing and plenty of opportunities for foraging everything from walnuts and hickory nuts to Paw Paws and mushrooms plus enough space that the noise of other people and machinery just fade away — Jones’ quest to rid the plot of invasive trees led to a written management plan as a Certified Tree Farm managed under the state’s Classified Forest Program and his involvement in the Indiana Forestry and Woodland Owners Association.

He’s sought out and received advice and assistance from District Forester Don Duncan and Consulting Forester Joe Schuerman in the past and attended many forestry educational programs over the years in both Indiana and Ohio while continuing to learn new ideas for managing his woodlands.

He has also been a leader of other foresters as president of the Historic Hoosier Hills Woodland Committee for several years and as an active member for decades.

But for Jones all that was just a way to make the most out of a plot of land he’s come to love. He’s gotten a great deal of satisfaction watching the forest develop and grow over the years from that emerging oak forest to the massive white oak he’s named “The Sherman Oak.”

Some days Jones would make the long drive out past Paris Crossing just to get away from Madison and his job, but on others he spent hours bushhogging paths through the forest, running a chainsaw to girdle trees he wanted to be rid of and identifying and tagging saplings in an oak grove.

Knowing that even the best of trees have a lifespan that eventually gives way to decline and decay, he harvested hundreds while they still were of value and made room for new growth.

“I’ve been managing this farm for 53 years and I’ve logged it once in 2010 for about 550 trees of which half were poplar,” Jones said noting that harvest barely dented the forest.

The 2010 sale of logs brought a nice return on his 1963 investment and rewarded him for years of effort by putting a bump in his retirement income. But it also created a lot more work from all the limbs and brush left behind by the operation.

“The people I picked to log it were very respectful of the farm and the trees that I wanted to keep but logging generates a lot of brush and it’s a lot of work to clear all that,” Jones noted.

A drive through the forest 10 years later — and Jones can drive his 4x4 truck throughout the property on pathways he’s cleared and keeps mowed — and the next generation of trees is well on its way to healing the scars from a decade ago.

Jones marks the young trees with color-coded ribbons to designate white oak, red oak and other species. Among the newer growth are the hundreds of other trees now ready to be cut just like those a decade ago, but Jones will let them be during his lifetime. He’s fine with his family cutting the trees — that’s what managed forestry is all about and the farm has been placed in a family trust — but he’s not ready to tackle another cleanup of brush and limbs. Having always lived a conservative lifestyle and invested well, he also doesn’t need the money.

Whether his family — or more specifically a family member — will step up and embrace the role of steward after he is gone, Jones does not know. He said he’s got a grandson who “loves running a chainsaw” so perhaps the farm will continue to serve as a getaway for a later generation. Either way Jones has enjoyed owning the land and has never regretted the purchase or the sweat and toil he’s invested in the forest and the peace and joy the forest has brought to him.

The health department’s Facebook Page indicated that three local residents died on Christmas Eve and two on Dec. 23, bringing the total number of county deaths attributed to the pandemic to 32.

In addition, there were 38 new cases of COVID-19 reported on Christmas Day, 42 on Christmas Eve and 20 on Dec. 23. The county has now seen 2,042 residents infections out of 12,081 tested since the pandemic began in March.

About 40% of the total Intensive Care Unit beds are currently in use for COVID patients with just 19.4%% of the overall beds now available.

Meanwhile, Switzerland County has now had 467 cases of the virus with five deaths.

News
Wolf jury trial for murder postponed to May
Handout

A former Madison Correctional Facility officer who is charged with two counts of murder and one count of attempted murder in Indianapolis is now scheduled to stand trial by jury in Marion County Superior Court on Monday, May 10, 2021.

Kristen L. Wolf, 29, of Madison, could face death or a prison sentence between 45 and 65 years on each of the murder charges and 20-40 years in prison on the attempted murder charge, which is a Level 1 felony. She is also charged with battery by means of a deadly weapon, a Level 5 felony punishable by one to six years in prison.

She has been incarcerated in the Marion County Jail since her arrest on May 22. Wolf was originally scheduled to stand trial on Oct. 5 but that date was pushed back to Dec. 28 and later postponed to May 10, 2021, after the COVID-19 pandemic shut down jury trials statewide.

Wolf is accused of stabbing to death Victoria Cook and Dylan Dickover at an apartment in the 5600 block of Portsmouth Avenue shortly after 8 p.m. on May 11, 2020. Cook, 24, was pronounced dead at the scene while Dickover, 28, died later at Eskenazi Hospital in Indianapolis. A third stabbing victim, Cook’s roommate Elizabeth McHugh, was wounded and transported to Eskenazi Hospital where she was treated for her wounds and survived.

According to Indianapolis Metropolitan Police, a witness who was Cook’s roommate, said Wolf stabbed Cook after she answered a knock on the door of their apartment. Dickover tried to stop the attack but was stabbed in the leg, severing a major artery.

In an interview with police at Eskenazi, McHugh said there was a “commotion” at the door and a woman in “some kind of uniform” came into the living room dressed in black pants, a shirt with patches on it and a black knit hat. She said the woman was holding a knife in her right hand when she came at her and started stabbing her in the neck.

McHugh said Dickover tried to stop the woman by grabbing her from behind, but the woman turned the knife on him and began stabbing him over her shoulder, according to an affidavit by IMPD Officer Caleb Melloh.

When police asked the roommate who might want to harm them, she said that she and Cook had broken ties with a “violent” man who Cook had been dating. She added that he had been “teaching them to kill with knives and axes.”

“She said that he trains women to kill,” Melloh wrote in the affidavit.

A neighbor identified the man that Cook purportedly had dated as Wolf’s current boyfriend, according to the affidavit.

After the attack, the suspect left a hat behind at the scene with an Indiana Department of Correction patch on it and a tag with the name “Wolf,” the affidavit said.

An internal affairs investigator with the IDOC matched the description of the suspect with the last name “Wolf” and found Kristen Wolf, according to the affidavit. Police then tracked down Wolf in Madison where she worked for the local state corrections unit.

Police picked up Wolf from her job at the Madison Correctional Facility on May 22, but she denied being in Indianapolis on May 11. A search of Wolf’s Madison residence on May 22 found several “combat style knives” and uniforms with patches identical to the patch on the hat found at the crime scene.

Wolf, a 2009 graduate of Southwestern, had worked at Madison Correctional Facility from February 2014 until May 22, when she was “terminated based on allegations of criminal actions” being investigated by IMPD.

Police also found on her bedroom nightstand a two-page note in which Wolf had written about what it would be like to kill someone and how she took inspiration from serial killers. Authorities said Wolf also wrote that she did not want to kill anyone she knew and that she was planning to die but was prepared for it. Police said Wolf had also attached to the note a will she signed on May 11.

Wolf was arrested and transported to Indianapolis where she is being held without bail. The probable cause affidavit was filed on May 28 and an initial hearing was held by video conference on May 29.

Authorities said Wolf’s coworkers told them she had said that her boyfriend was sending her messages about killing people, that she was becoming more paranoid and that she cleaned the inside of her car and then inspected it with a black light.