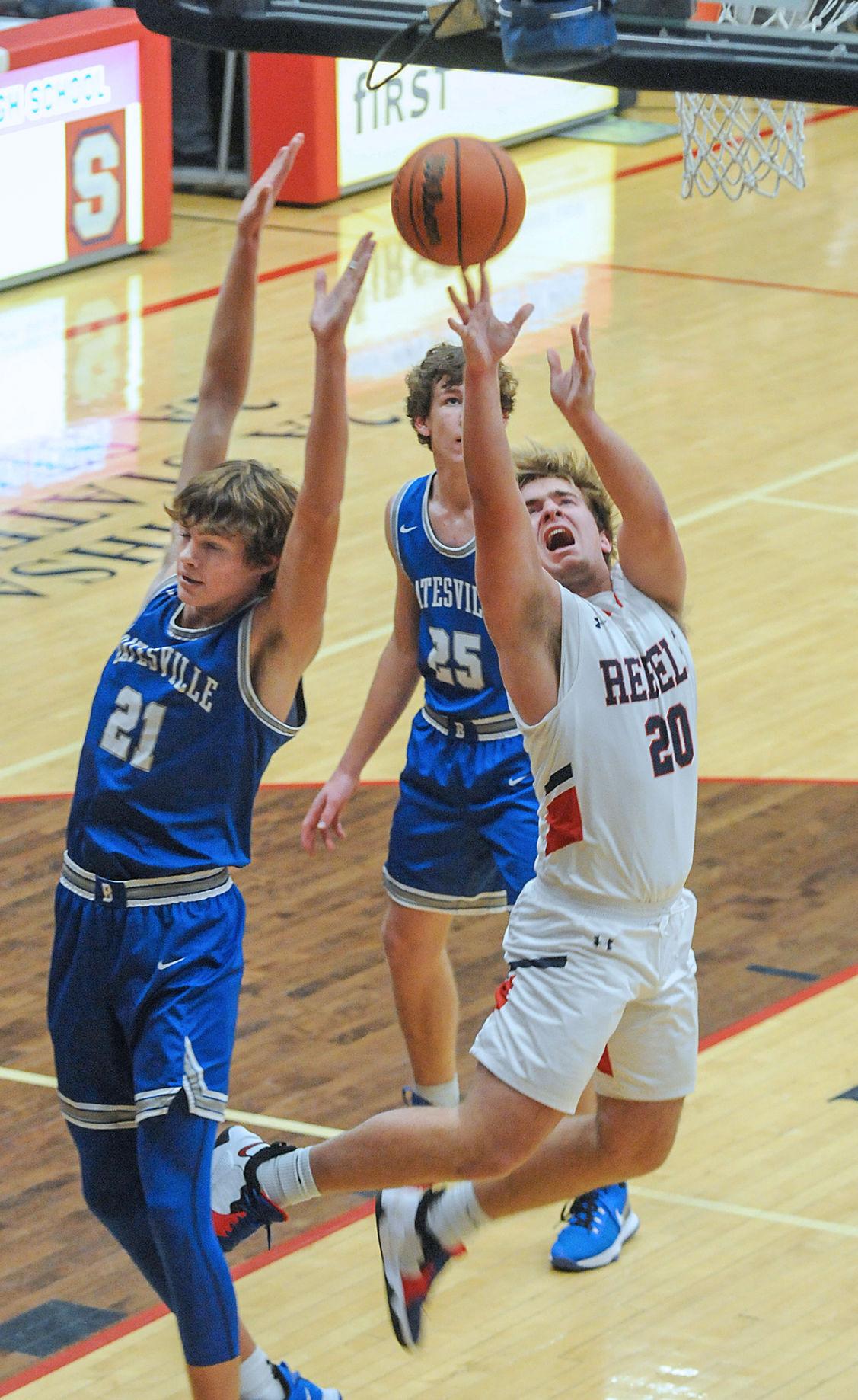 Cub Enterprise Coordinator Whitney Mathews and students Chip Cox, Skylar Smith and Avery Darnell, pictured, from left, display the 2022 cake toppers that have been approved by Royer Corportation to be produced by Cub Industries at Madison Consolidated High School.

Cub Industries student Chip Cox works on designing a name tag, one the many items Cub Industries is involved in producing, along with the new product line students are making for Royer Corporation.

A milestone was achieved last week for Madison Consolidated High School’s Cub Industries when the student-run business began producing a line item for Royer Corporation, creating a revenue stream for the first time in its goal toward becoming self-sustaining.

A Radian laser system was donated by Royer to Cub Industries to be used to create the product by engraving and shaping according to the company’s design. The most current project involves 2022 cake toppers, but they will be producing other types of event planning décor — using the custom plastic injection molder to create beverage stirrers, picks, coasters and a variety of other decorator items — to be sold on Royer’s Amazon online market with profits shared between Cub Industries and Royer Corporation.

Cub Enterprise Coordinator Whitney Mathews said the partnership with Royer came from discussions last summer and she said “they were very receptive” to it. “That was great for us because they jumped in and put a lot of faith into us developing this and they’ve been great to work with.”

Cub Industries is a combination of Cub Manufacturing, the student run business established in 2015, and Cub Engineering, the engineering and design aspect of the business established in 2017. Students in Cub Manufacturing perform duties and oversee all functional aspects of the business — marketing, finance, logistics, production and more. Students in Cub Engineering work hand-in-hand with the production team from design, prototype, quality testing and production to ensure a quality product.

Schutte said that since the beginning, Cub Industries has worked with many community business partners that have invested financially, assisted with equipment and been involved in creating the building where Cub Industries is located on the MCHS campus.

Roger Williams, president and chief executive officer (CEO) of Royer Corporation, was instrumental in the beginning of Cub Industries, along with Dave Ungru, president and CEO of Koehler Welding and Supply, who came to the school corporation with the idea after they had seen a model designed by Cardinal Manufacturing, a student-run enterprise at Eleva-Strum High School in Strum, Wisconsin, in which there is a machining operation.

“They brought the concept to the school and said this will be really cool to do,” said Schutte. From there, in addition to Royer and Koehler, other Madison manufacturers got involved including Arvin Sango, SuperATV, Indiana-Kentucky Electric Corporation, Vehicle Service Group (VSG) and Madison Precision Products and all “have really invested in this program.”

Schutte said students in the program learn all aspects of a typical manufacturing business by being responsible for daily operations including marketing, accounting, logistics, purchasing and production. She noted that takes students beyond theoretical learning in the classroom, and helps them to “understand what the real world is” to be better prepared for the workplace after they finish school.

Mathews said with the curriculum at MCHS students are “getting the education piece, but they’re also getting the hands-on and the employability piece” as they learn specifics of what it means to be employed. “How to work on someone else’s time is a huge concept that a lot of younger people don’t understand,” she said. “By doing things like giving them specific projects and hitting them with deadlines, that’s a piece of accountability they don’t get sometimes by just being in a class.”

Mathews said there are students who are project managers, overseeing the floor workers to be sure they are working with the other student staff to ensure orders get completed and shipped back out. “We market over our orders. We make sure things are ran properly. And make sure our project is executed correctly,” she said.

In the first year of production for Royer Manufacturing, Mathews said students will be offered a stipend, but the plan is to eventually transition toward providing the students with a dollar pay rate while they are in the building. Depending on the demand, that could lead to an after-school job or a summer job for students, noting the goal of Cub Industries is to have year-round production.

“We’ve really got a mini-corporation going,” said Mathews, noting Perry Central’s Commodore Manufacturing in southwestern Indiana is the nearest student-based enterprise. “This is an opportunity that students aren’t necessarily going to get at surrounding schools.”

But even beyond that, Mathews said, “Our number one goal is to be sure we’re sending qualified kids out into the workforce,” particularly for industries in Madison who are seeking good employees. “It’s a way to give back to the organizations that have supported us.”

Herrick has worked with the engineering students to set up the product designs in the laser software that were sent to Cub Industries by Royer. The Radian laser system has the capability of doing wood, acrylic, metal or leather and can engrave and customize for whatever a customer needs.

Chip Cox, a MCHS junior, said that setting up the design for products involves “a lot of problem solving” using trial and error in tweaking it until it’s set up the way it needs to be. Adjustments must also be made, depending on what type of material is being used because the machine reacts differently to each type.

MCHS junior Avery Darnell said it also involves establishing different speeds, power, frequency and more that have to be adjusted according to what material is being used.

Cub Industries is preparing students for whatever lies ahead in their future as they sort out what they want to do with their careers.

“Even if you don’t end up pursuing,” Cox said, “you have that knowledge if you get a job in the future that involves something similar to it. It definitely provides more experience, and skills in technology.”

Mathews said there are plans to continue expanding Cub Industries to provide even more benefits for MCHS students, even beginning with learning opportunities in junior high and by creating the program’s own Etsy account to grow business and much more. “We’re excited for what you’ll see in a couple of years,” she said. 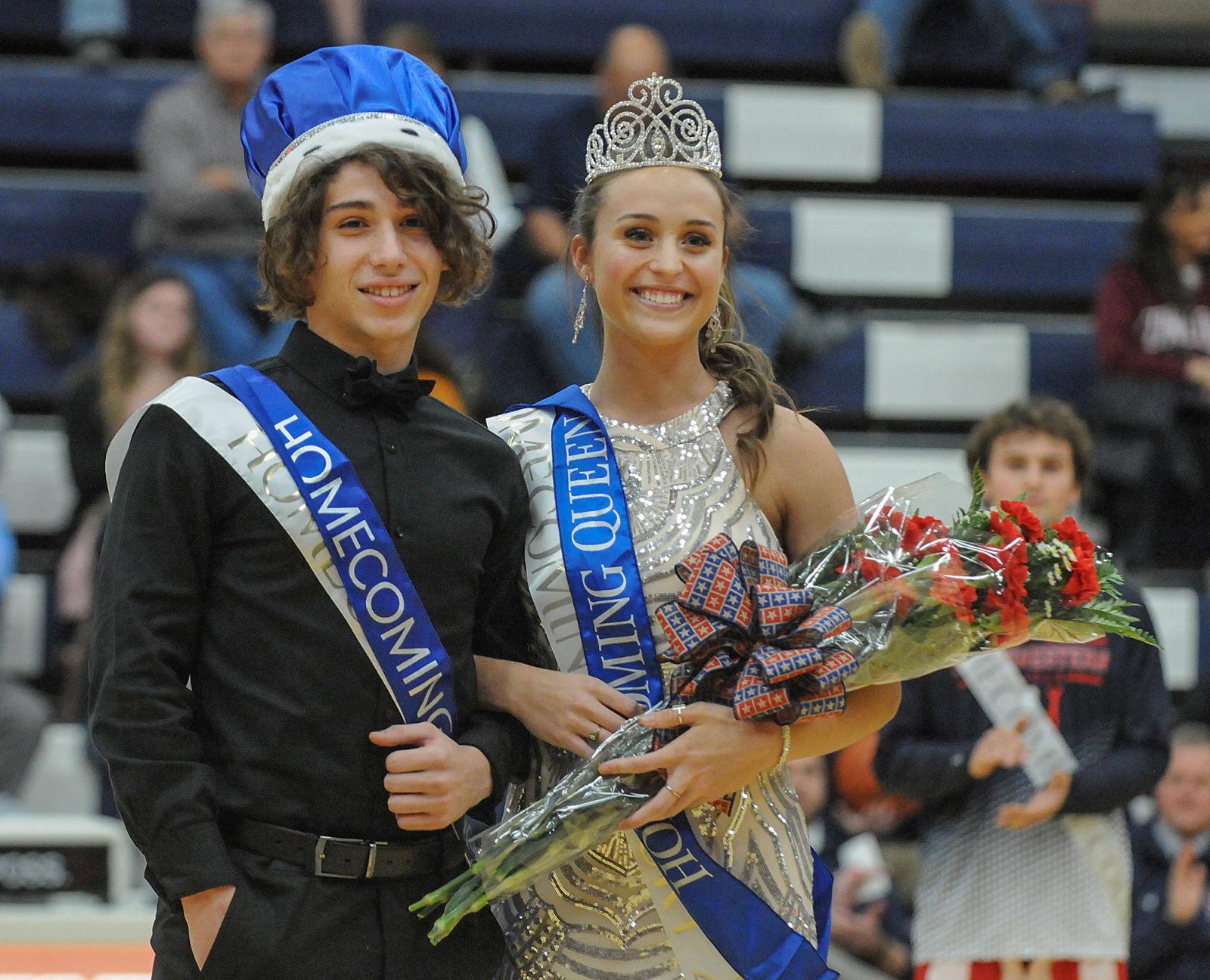 The board approved a request for $32,480 — $10,856 going to classroom equipment and $21,624 for lab equipment — after hearing a presentation by MCHS students Matthew Burkhardt, Chip Cox and Neel Mistry, who are all involved with Cub Manufacturing.

Prior to approving the appropriation, there were questions from the Redevelopment Commission about the funding mechanism for Cub Manufacturing.

Derek Herrick, who oversees the engineering department of Cub Industries, said there are course fees for equipment directly for students that they take home but most of those fees are paid by SuperATV. However, other equipment not included in that is also needed and that’s where the Redevelopment Commission can help. He said the program is also funding itself with money coming from sponsorships and profits from products students create.

“We try to be solely sustaining on that,” Herrick said.

He said the plan is to expand Cub Industries to be self-sustaining and “hopefully in the future we will not have to ask for this” if Cub Manufacturing can be totally self-sufficient by showing a profit. He mentioned a new parnership with Royer Manufacturing that began this week as a situation where Cub Manufacturing will share in profits.

Madison Mayor Bob Courtney noted it is common across the state for TIF districts to support the school system in a variety of ways.

“I’m in favor of this because in the two years I’ve been on the Redevelopment Commission I don’t think we’ve funded any material amounts, and I like to make the investment in our youth and it is staying local,” Courtney said. “Also, there are great learning experiences happening here in regards to the work and the product and the engineering and manufacturing. I’m happy to see how Cub Manufacturing has evolved.”

MCHS Principal Michael Gasaway said the most recent request from Cub Industries to the Redevelopment Commission was for $90,000 four years ago.

“To get to where we’re self-sustained and not asking, we’re getting to that point; it’s just taking some time,” Gasaway said, noting that with the Royer partnership they’re closer to being there. “We started this in 2015, so we’re still fairly new.”

Board member Dan Hughes asked whether products to be purchased with Redevelopment funds will be purchased locally. Gasaway said while they “do love to stay in town with local vendors but we do get three quotes whenever we’re purchasing equipment like that to make sure we’re using the money wisely and getting the most we can out of our money.” Additionally, it was noted that choices for purchases are made in conjunction with the local business partners that are on the Cub Industries advisory board.

The appropriation for the classroom equipment was approved by Redevelopment Commission members John Grote, Dan Hughes and Cary Strouse with board member Dr. Jeffrey Studebaker, who is superintendent of Madison Consolidated Schools, abstaining.