County Councilman Chris Shelton displays a plaque he had made for retiring Councilman Joe Craig at Tuesday’s County Council meeting via Zoom as Councilwoman Heather Foy smiles with approval. The meeting was Craig’s final session after 32 years of service.

The Jefferson County Council approved a $26,000 transfer from the sheriff’s office to the county jail’s overtime fund Tuesday night to compensate for staffing shortages caused by the COVID-19 pandemic.

Meeting over Zoom for the first time since May due to spiking coronavirus cases, council members heard Sheriff Dave Thomas explain his department’s situation. Thomas said the sheriff’s office needed thousands to pay down worker’s compensation time accrued as a result of staff members working overtime through holidays while many others were sidelined while quarantining.

Because of staff shortages, many jail employees didn’t take their own holidays, Thomas said. At one point an entire shift at the jail was out of work because of COVID-19, so the sheriff’s office had to double-time some employees to cover the 24-hour staffing demands, he added.

The department is facing a similar situation with a couple deputies out quarantining and may need additional funds to pay them out as well, Thomas said. Luckily, he said, the jail population has remained free of the virus.

“I have to have people in the jail, and that’s the only way we could resolve it, and what I’m trying to do is buy back some of that so they don’t lose it all and get some of the comp time down … they can only carry $480 over and I’ve got some people that have over $700 of comp time,” Thomas said.

Tuesday also served as the last meeting for county council member Joe Craig, who opted to not run for another term this year after 32 years of service to the county. Fellow councilman Chris Shelton thanked Craig for his help over the years and displayed on Zoom a plaque he had made to commemorate Craig’s service.

“When I joined the council a little over seven years ago now, I know you helped me out quite a bit along the way and it’s greatly appreciated,” Shelton said. “I know you’ve helped all of us out and your experience will be greatly missed.”

The rest of the council nodded and agreed.

“You guys are in great hands,” Craig said, referencing the incoming council members from this year’s general election and the existing members. “It’s been great to work with you. I’ll stick my nose downtown every now and then to see what’s going on. If you need me you know where I am.” 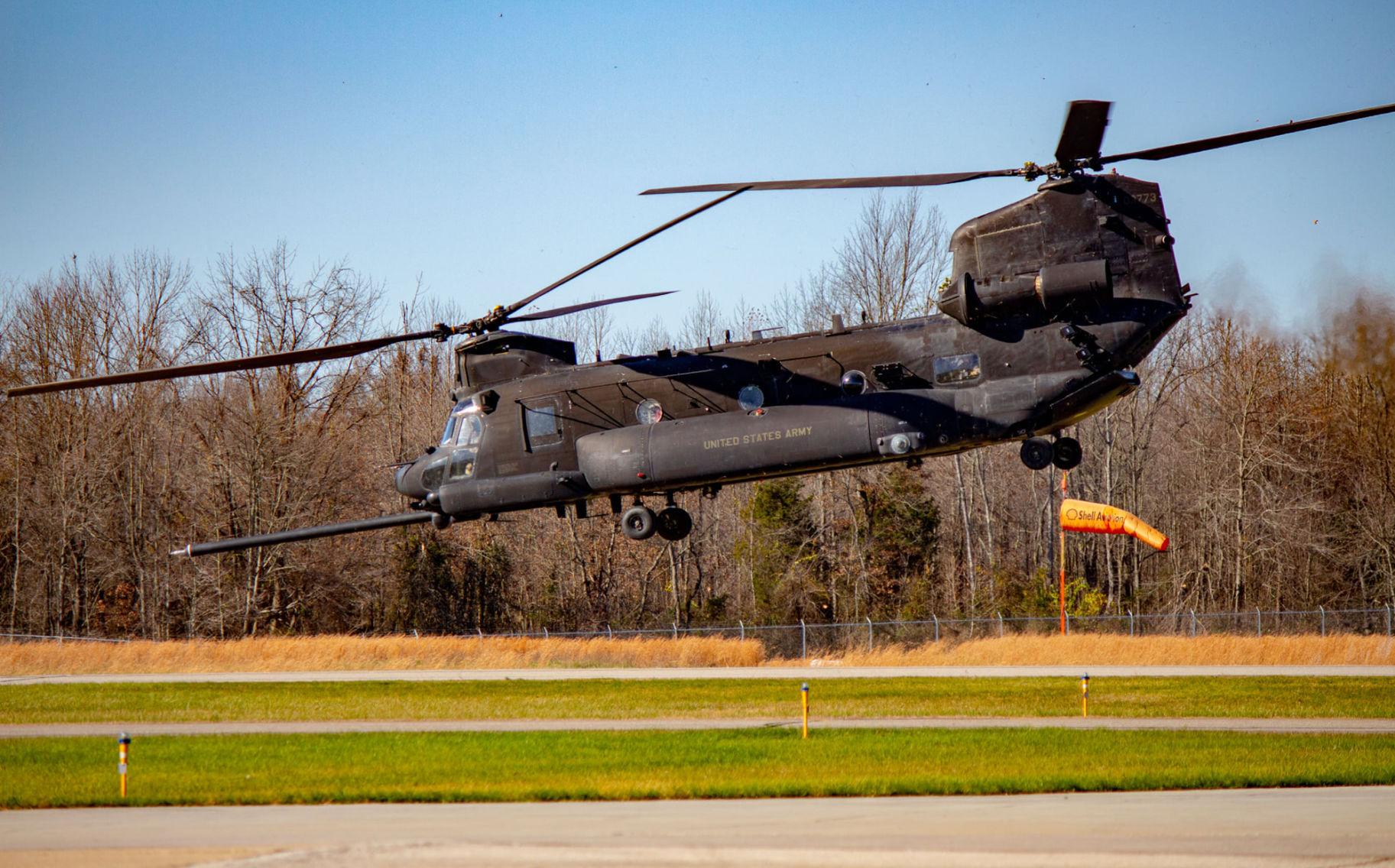 Madison Municipal Airport serviced several U.S. military aircraft this week when Blackhawk and Chinook helicopters used the field on Madison’s hilltop for refueling while conducting realistic training night operation exercises. On Monday, the loud flutter of two Blackhawk helicopters was the only sign of their approach as they arrived at the field operating in night mode with all lights off until reaching the runway. Three Chinooks — like the CH47G Chinook pictured in an earlier test visit — were expected to arrive Wednesday at about 10 p.m. Airport Manager Brent Spry said the helicopters used Madison for refueling under a Department of Defense contract with the airport staff pumping about 1,000 gallons of jet fuel over their three-hour stay. “Our record fuel sale until this week was like 1,300 gallons for a jet, but the three Chinooks will probably need about 1,600 gallons.”

Dropping in at Madison Municipal

Madison City Council heard the first reading of an ordinance Tuesday night that would allow Mayor Bob Courtney to designate a member of his staff as the city’s deputy mayor in the event that he is unable to fulfill his duties as the city’s top elected official.

Courtney well knows the turmoil that such situations can present. He first stepped in as mayor after the unexpected death of his predecessor, Damon Welch, in 2019. Courtney, already a candidate for the office, was elected by a Republican caucus just days after Dattilo, the council’s pro tem, had been sworn in as interim mayor on an emergency basis.

In an interview Wednesday morning, Courtney noted that being the chief executive of the city is a full-time job that few other elected officials have the time to take on since most already have full-time jobs. He said the city’s business needs someone who can devote full-time to the task and be ready to make decision in an emergency.

“Having a deputy mayor — which our state statutes allow me to do, and many other city’s have done — allows me to delegate my authority to an appointee at no cost to the city in the event of my death or if I’m incapacitated. I come from the corporate world where companies work hard on succession planning … it’s just prudent planning to have contingency planning.”

Courtney said the untimely death of Welch, and his own diagnosis with COVID-19 last month, point to the need to put a plan in place. Although Courtney experienced only mild virus symptoms, had he needed to be placed on a ventilator like some who contract the coronavirus or even died, the city would have faced another emergency — possibly even a situation where the state would have to step in — when having a deputy already in place would have insured a more seamless operation by someone well-familiar with city business.

He said the ordinance as proposed would allow for the deputy to serve in his capacity for up to 15 days before other action would be necessary. That would give the city enough time to consider its options moving forward.

Courtney noted the process is not unprecedented in local government or even in the various city departments.

The ordinance received a first reading Tuesday along with a second ordinance to redefine the job description of the chief of staff to include deputy mayor. Both will be back on the agenda later this month for a second reading when the floor will be opened for public comment.

Tuesday’s meeting, originally scheduled for the Zoom format, was revised that afternoon to have the council meet in chambers since the group already planned to meet beforehand in an executive session that would have been difficult to execute on Zoom. However, very few members of the public received that notice and the audio portion of the Facebook Live feed that was used to broadcast the meeting to the public was nearly impossible to hear.

Courtney said the city will most likely hold its next meeting in council chambers with limited public attendance due to ongoing state virus restrictions but that efforts will be made to eliminate technical issues and provide a better experience for those watching online. He said many cities and counties continue to struggle with technology during the pandemic but that Madison has done much to increase transparency even though Tuesday’s meeting fell short.

Courtney did make several board appointments Tuesday that were approved by city council. Owen McCall and Josh Wilber were reappointed to the city’s Historic Board of Review and Jerome Vernon and Jerry Wade were named new appointments to that board. The vote was 5-1 with Councilman Patrick Thevenow opposing.

The council also voted 5-2 to suspend Tami Hagemier from the Jefferson County Board of Tourism pending a decision on whether she should be removed from that board. Councilmen Thevenow and Chatham both voted in opposition.

The Madison Courier reported last week that it had been alleged at a Jefferson County Commissioners meeting that Hagemier had mismanaged grant application scoring for a COVID relief loan program. Hagemier serves on that board as a city council appointee

Courtney said the council hopes to meet in executive session with Hagemier prior to its next meeting when her fate on that board could be decided.

In other business, the council approved resolutions to set aside funding for road projects, Crystal Beach improvements and heard a report that the state has restored a $450,000 budget cut to the city’s 2021 budget after the city provided documentation supporting the original allocation.

The council approved a resolution earmarking matching funds to apply for up to a $1 million grant for road improvements on State Road 56/Main Street in downtown Madison that require a 20% contribution from the city. The city’s Old State Road 56 Non-Reverting Fund will total about $1,148,000 in 2021 with more than $5 million worth of work needed on the 4.4-mile stretch of highway. The grant application is due Friday.

Meanwhile, the council approved a resolution earmarking $298,900 in matching funds to execute a grant to make widescale improvements and upgrades to the Crystal Beach pool including a new deck and pool liner, renovations to the pool house and improvements for ADA accessibility and for creating an event space on the second floor of the building. The proposal is one of the city’s Stellar-designated projects.

The next council meeting is scheduled for 5:30 p.m. on Tuesday, Dec. 22 at Madison City Hall.

Board of Education members approved Watson’s promotion at a regular meeting Monday night.

Already the district’s safety coordinator, Watson will begin splitting duties as principal and assistant to Superintendent Jeff Bates on Jan. 4 and Southwestern will likely begin advertising for a new middle school principal in February, Bates said.

“I’m excited to have Jason come over and help in the central office,” Bates said. “I think that’s a real good move for the corporation.”

District principals also gave updates on their schools after the first day of in-person classes since shutting down for virtual learning almost a month ago.

At the high school, due to a high number of quarantines, no semester exams will be held this month, high school principal Matt Owens said. Instead, the school will average grades from the first two nine weeks together.

While students and staff are happy to be back in the classroom, this year’s experienced with virtual learning has gone a lot smoother than in the spring, he added.

“Teachers said students were participating at a much higher rate than what we saw in the spring, at that’s encouraging; we’re trending in the right direction,” Owens said.

Monday night was also the last meeting for board members Narci Burress and Jodi Gray. Burress was unseated in the November school board election by Misty Jacobs, while Gray chose not to seek reelection. Jonathan Simpson ran unopposed for her seat and will join Jacobs and the rest of the board at the start of 2021.

“I just wanted to say thank you for all that you have done not only for Southwestern Schools, but personally for me, you guys have been great to work with,” Bates said.

Burress reflected on her tenure by saying the current board was the best she has ever worked with.

“This board has been the best board I’ve ever worked with. If we had anything to say we didn’t agree with, we worked it out. No one here ever had an agenda, which is the first board that I’ve ever worked on … All you hear about is the kids and that’s important.”

Gray echoed the remarks by Burress.

“I hope you guys can carry that torch forward and the new members coming on can do the same, because we’ve got a good dynamic here, and Jeff makes it easy, too,” Gray said.

The board will meet for a workshop retreat with the new members at 5 p.m. on Monday, Jan. 4, at Clifty Falls State Park. The next regular meeting is scheduled for 5 p.m. on Jan. 11 at the elementary school.