The caucus was called by Jefferson County Republican chairman Pam Crozier following the resignation earlier this month of Sherry Eblen, who had served as County Auditor since Sept. 5, 2014 when she was appointed to complete the unexpired term of Celeste Reed, and then elected in both 2014 and 2018.

No other candidates filed for the position, but precinct committeemen were still required to vote by secret sealed ballot and after the votes were tallied, Huff was duly elected.

Huff is a lifelong Jefferson County resident from Deputy who graduated from Madison Consolidated High School in 2003. She and her husband, Jason, have two children, Quinton, 15, and Sydney, 13, and she is active with 4-H serving as a club leader.

Huff has spent most of her working career with Jefferson County government except for a brief time after attending Ivy Tech when she worked for Centra Credit Union. Overall, she has worked 13 years for the county including 11 years in the Auditor’s Office. She also worked a short time in the County Treasurer’s Office

“The auditor’s office has always been home to me. That’s my comfort zone,” Huff said. “I love working with budgets, working with the County Council and resolving problems, and getting things to where they need to be. The Auditor’s office is the hub” of everything that goes on in county government. “Everyone is in contact with us all the time.”

Huff said she has gained a great deal experience while working in the Courthouse. “I have been through fires, floods, and now I’m working through our second jail construction project. It’s always changing,” she said. “There are a lot of hours and detail put into the budget, but I like helping to keep the county budget balanced. It is very rewarding to keep everything in check and protect the taxpayer.”

“I have worked very closely with Sherry,” said Huff, adding that experience should make for “a smooth transition” and the two have “had a great working relationship.”

“It’s very bittersweet to see her leave,” Huff said of Eblen. “She was a good boss, and I have loved the time working with her. She has taught me a lot.” 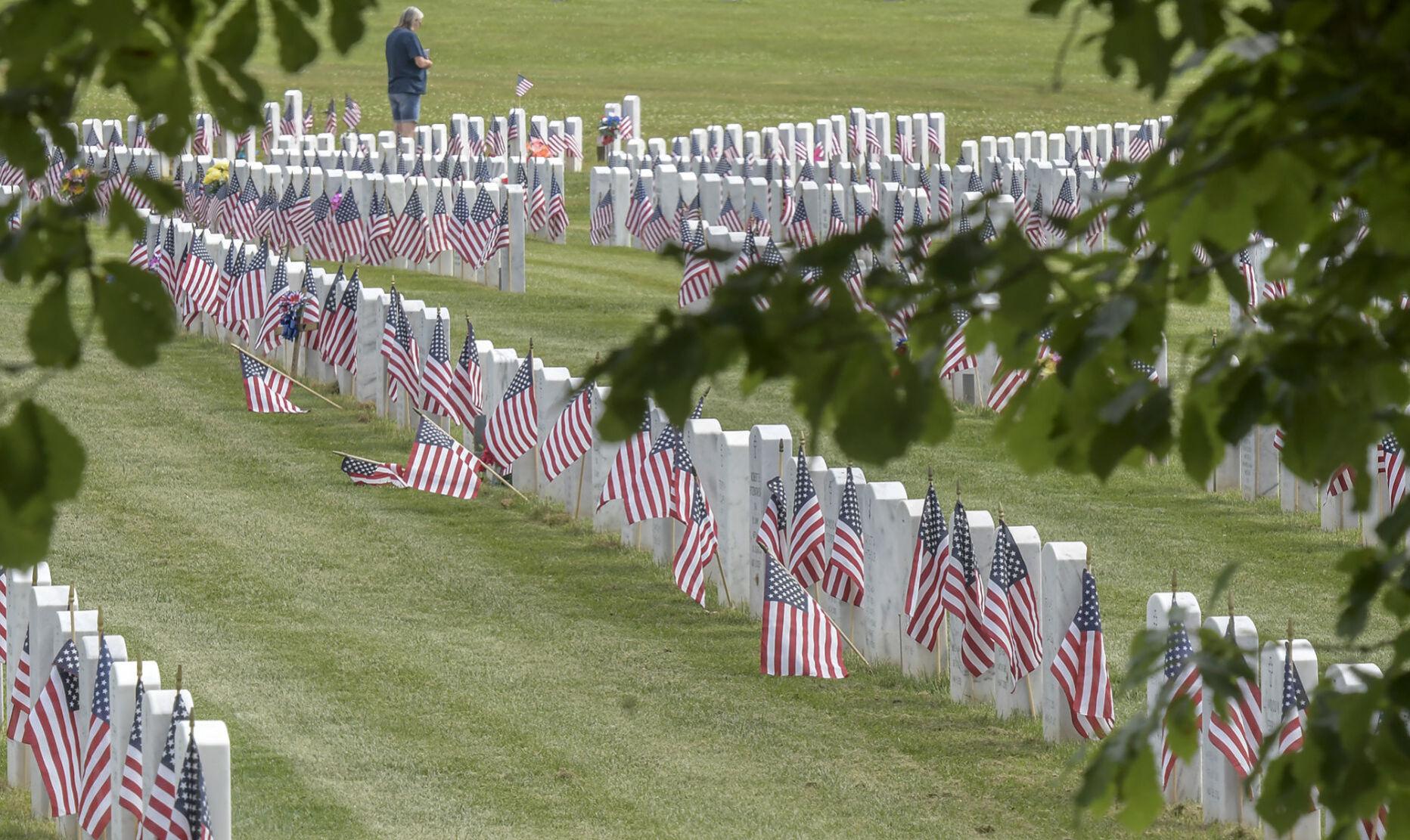 A lone visitor pays respects Thursday at the grave of a veteran at the Indiana Veterans Memorial Cemetery in Madison where American flags have been placed at each tombstone ahead of Memorial Day on Monday. The cemetery, which opened on Dec. 1, 1999, is now the final resting place for 2,415 US veterans and their spouses including five soldiers who were killed in action. A special Memorial Day service will be held at 1 p.m. on Monday rain or shine with State Rep. Randy Frye, Indiana Department of Veterans Affairs General Counsel Gabrielle Owens and Madison Mayor Bob Courtney speaking. The service will also be streamed live on the cemetery’s Facebook page at www.facebook.com/INVetMemCemetery.

Left: A line of Brood X cicadas emerges from underground and ascends a tree near the intersection of Eighth Street and Branch Avenue on Madison’s hilltop where thousands of insects have emerged to cover the ground with discarded exoskeletons and fill the air with their noisy mating sounds in a once every 17 years phenomenon.

Jefferson County faces all sorts of challenges that are impacting the mental and physical health of its citizens, and a new group has been formed with the goal of improving the short- and long-term health of residents.

Resilient Jefferson County (RJC) is a new initiative that has been launched to improve the lives of children and reduce the life-long impact of trauma in the community.

As part of the effort in launching the RJC initiative, there will be several community in-person and virtual screenings of the documentary, “Resilience: The Biology of Stress and the Science of Hope” that will “help people understand why we must work together to become a trauma-informed community,” said Bill Barnes, Community Foundation of Madison and Jefferson County Foundation (CFMJCF) president and CEO.

Barnes said the “film points out what toxic stress does to adversely affect childhood development. It rewires the child’s brain, and studies show that leads to poor health outcomes” that impacts them not only as children, but carries with them into adulthood putting them at a greater risk for disease, homelessness, prison time and early death.

The next in-person screenings of the documentary is June 16 from 6:30 p.m. to 8:30 p.m. at Opal Sherman Auditorium at Madison Consolidated High School. Virtual screenings via Zoom will be June 3 from 9 a.m. to 10:30 a.m. and June 8 from 11:30 a.m. to 1 p.m. The documentary is one hour and will be followed by a brief discussion. To register for a screening or to learn more, visit the Resilient Jefferson County Facebook page.

The mission of Resilient Jefferson County is to raise awareness of Adverse Childhood Experiences, also known as ACEs, which come in many forms, from physical and mental abuse to neglect and household dysfunction. The initiative is supported by a $100,000 grant provided by Lily Endowment Inc. to CFMJCF that will also provide training opportunities in the community.

Barnes said what RJC has begun is part of a long-range effort. “We will be building on this for years,” he said.

So far they have engaged nearly 30 community leaders and RJC’s 10-person steering committee includes members from the schools, mental health, community corrections, the hospital, business and the non-profit sector.

Keith Howard, Healthy Communities Initiative coordinator, said the effort involves addressing the issues that are causing the problems before they happen. He related it to taking a boat upstream that flips over. Rather than dealing with the repercussions, “what if you kept the boat from overturning to begin with?”

Barnes noted many of the community problems are dealt with after the fact. “This is a chance to intervene with preventative strategy,” he said.

Boone said she has “worked in hospitals and healthcare a long time,” and she said hospitals can only do so much. “Healthy communities are not what the hospital does, it’s about what the community does,” she said, noting hospitals treat what makes people unhealthy such as smoking, obesity and substance abuse, but that the reasons people are unhealthy are “much deeper” than what’s happening at the hospital.

With people in the community working together, Boone said RJC hopes the initiative makes a difference in the lives of everyone in the community “by helping us to rise above” with more people enjoying healthy lives.

The City of Madison has hired Chad Ison as parks program coordinator to oversee all youth, adult and senior activities within the parks department.

Ison is a graduate of Madison Consolidated High School and native to the Madison area. Following his graduation from Ball State University, where he obtained a degree in sports administration, Ison spent time working with the Madison Consolidated Schools’ athletic department, where he has invested in the lives of young athletes and students through coaching, academic support and mentorship.

“I am thrilled to start as the program coordinator for the Madison Parks Department. I’m passionate about my hometown and excited to help with the growth and development of the city and programs that helped shaped me into the person I am today,” said Ison.

Aiming to revitalize the department’s programming, Woolard hopes to reverse a history of activity decline by ushering in fresh and creative ideas.

“The program coordinator role is vital to the quality of life for the citizens of Madison, and we could not have found a better candidate than Chad. He is going to bring energy, better organization and creative solutions that will rejuvenate our youth programming while also helping recruit new tournament hosts to fill Rucker Sports Complex every weekend,” Woolard said.

Ison will work closely with Woolard to advance the efforts of Mayor Bob Courtney as he seeks to improve the effectiveness of the city parks department and the quality of life for Madison residents. 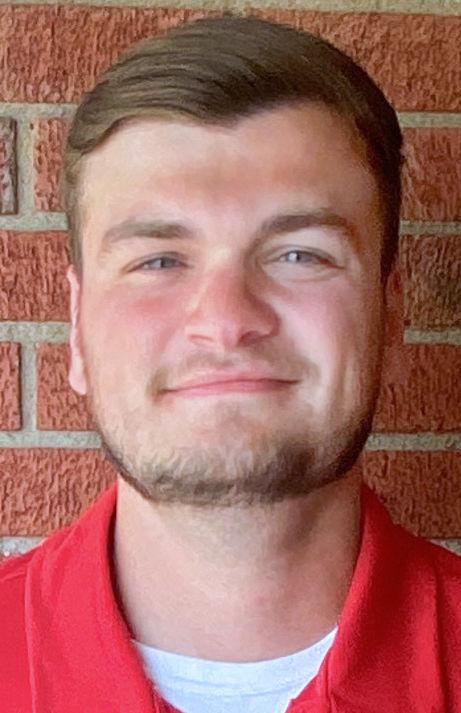