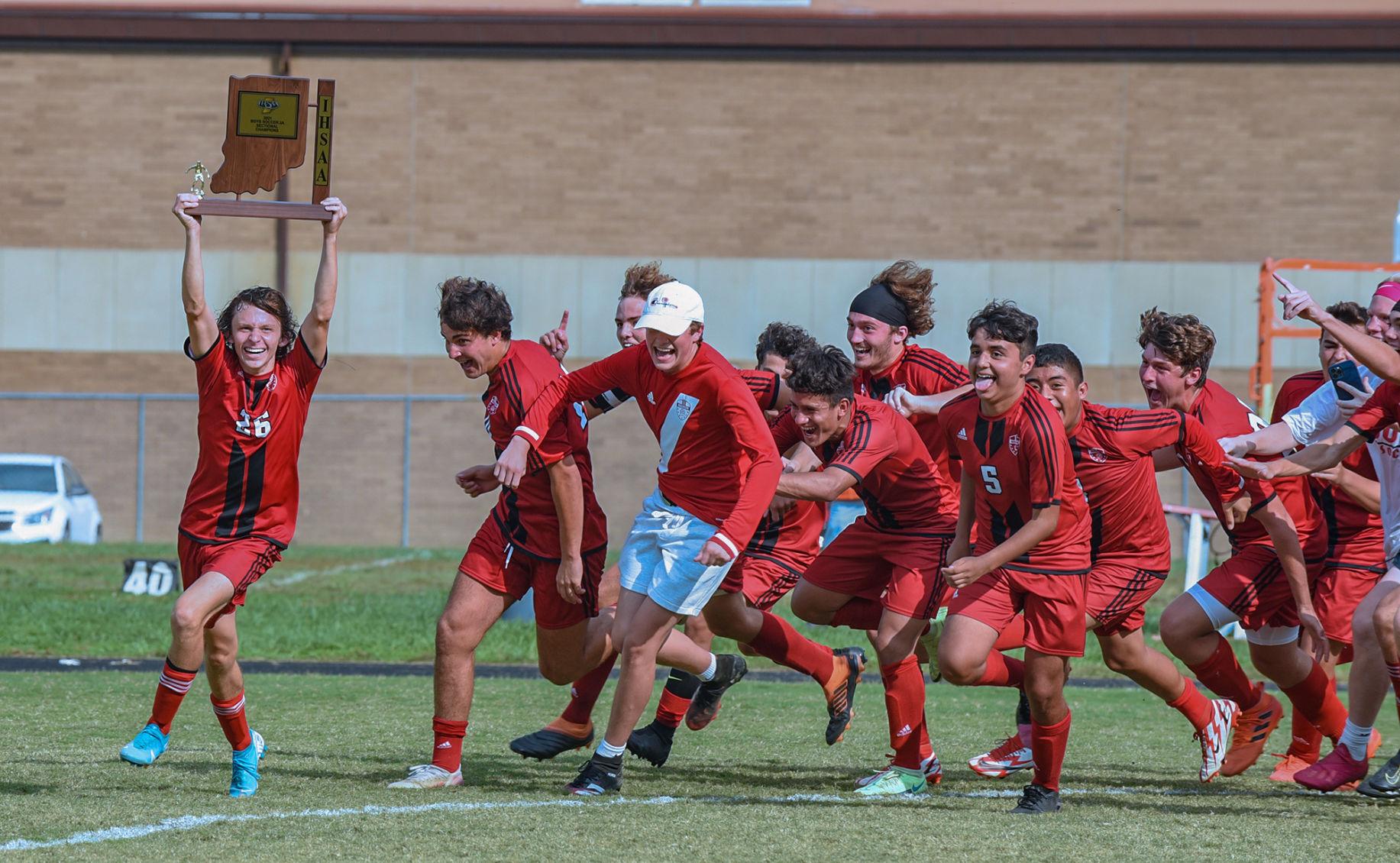 Madison’s players chase senior Harrison Hall (26) as he runs away with the sectional trophy after the Cubs claimed the title on Saturday at Scottsburg.

Above left: Hoosier guitarist Kade Puckett drew a large gathering as he performed during Saturday’s Soup, Stew, Chili and Brew on Main Street in downtown Madison. Above right: Ashley Miller dips up some soup for a customer at the Gallery 115 booth at Saturday’s Soup, Stew, Chili and Brew. It was a busy day for all the booths with many selling out by the middle of the afternoon.

The day could not have been more perfect for the 19th annual Soup, Stew, Chili and Brew Festival in downtown Madison. Beautiful weather, good food and drink and a lot of happy people supporting local non-profits and businesses.

“It was a beautiful day with great weather, great food and great musicians,” said Emilee Roberts, executive director of the Madison Area Chamber of Commerentce which organizes the event. “I heard a lot of positive feedback from everyone involved. I take it as a win.”

Soup, Stew, Chili and Brew is traditionally the only Madison festival on Main Street, and Roberts said the day went “incredibly well” for downtown businesses. “That’s why we love having it on Main Street.”

Roberts said the Chamber will be counting tickets and money this week, but all indications are that it was the best crowd ever. She said local musician Rusty Bladen, a longtime performer at the event, called it “a record crowd” from his perspective.

For the cooks at the Samuel Woodfill American Legion Post No. 9 Auxiliary, it could not have been a better day. The auxiliary won awards for best decorated booth along with best soup and third place for best stew.

“I think we did exceptionally well” in not only winning prizes, but also with the successful sales during the event, Gina Copeland, president of the Auxiliary, said. “You can’t beat that.”

All proceeds from the day’s sales by the Auxiliary go back to the community through their programs for veterans in which they give presents to veterans in nursing homes at Christmas, along with “Adopt a Veteran Family”.

“Our heart and soul is with the veterans, but we also donate to the community,” said Copeland. “If there is some organization in the community that needs help, we’re helping there too.”

Copeland credited LaVerne Copeland, the organization’s financial officer, for the winning fall decorations on the booth. The Auxiliary, participating for just the second time in the event’s history, received first place for its fisherman’s stew and third place for a taco soup.

Autumn Trace Senior Communities was winner of the best soup with its Italian sausage white bean soup. Autumn Trace, which opened in Madison in the summer of 2020, was participating in the event for the first time.

Other soups were tested by Autumn Trace employees to decide which to submit to judges, and the Italian sausage white bean soup, a recipe created by Callie Keeton, was their favorite. As it turned out, it was the favorite of the judges. Keeton said they also got compliments on the soup from customers. “We had one guy come back four times, and each time he asked for a large bowl,” she said.

Overall, Keeton said it was a “fun day” for the Autumn Trace Soup, Stew, Chili and Brew team. “We’re excited to be here and participating.”

The Troublemakers, a family operation, was winner for best chili. Mark Darnold said the Troublemakers booth was actually a family effort by the Darnold and Obendorf families in the area with the “troublemakers” name in jest — something he said people would jokingly be refered as back when he was in school.

Darnold, who has a farm in northeastern Jefferson County in Shelby Township, said the family has been participating in Soup, Stew, Chili and Brew for seven years, each year using the same recipe that includes onions and two types of peppers. Darnold said he tweaked the recipe a couple of years ago, and “that seemed to have paid off.”

Darnold also served tomato basil soup at the family booth along with optional grilled cheese with or without bacon. He said they also have fried biscuits with cinnamon sugar and a side of apple butter, which Darnold thinks if a dessert category is ever added, they might have a chance at an award there.

Phagan said Gallery 115 has participated in Soup, Stew, Chili and Brew every year since opening Gallery 115 on East Main Street in April of 2012, but it’s the first time for receiving an award. “I had someone follow me from the awards, and tell me he wanted to try the apple cider. He told me, ‘The judges were right, it was the best’, and then asked for a second cup.”

“He would love it, but he would be humble about it,” said Britton.

“He never would have allowed us to do it if he were alive,” Jason added of his father who died on Jan. 15, 2021, at age 88. “But it’s an honor that his family viewed as highly fitting. “He was such an avid supporter” of the Jefferson County Democratic Party, said Britton.

Jones said he had talked earlier in the day with former Congressman Lee Hamilton, who had fond memories of Schnaitter. “In the 34 years I served in Congress, I met a lot of personalities but I only met one Spence Schnaitter,” Jones said Hamilton had told him.

Jones read a letter from Mike Schmuhl, chairman of the Indiana Democratic Party, who characterized Schnaitter as being “dedicated to service and rooted in Hoosier values”; that through his work in the state legislature that Schnaitter “changed the trajectory of Indiana.” And Schmuhl also wrote Schnaitter had “legacy and passion for equity that will live on for generations.”

Schnaitter was elected to five, two-year terms as a Democratic member of the Indiana House of Representatives. While serving in the state legislature, Schnaitter principally served on the House Ways and Means Committee and was Chairman in 1975-1976. During his time there he focused on securing funding for local education, and supported legislation for the creation of Ivy Tech Community College throughout Indiana.

Jones said Schnaitter was always a strong advocate for Madison and Jefferson County. “No matter where he went, he was an advocate for this city and county,” he said. He noted one of his most noted achievements was work on legislation that formed the Madison Port Authority, which saved the short line rail line between Madison and North Vernon.

Jefferson County Democratic Party chairman John Hutchinson said he was 10 years old in 1950 when he first became aware of Schnaitter, a member of the Cubs’ basketball team that won the state championship that year. Many years later, Hutchinson got to know Schnaitter at Trinity United Methodist Church. At one church function, they happened to sit at the same table, and Hutchinson noted it seemed they were at the “Democrat table.” Hutchinson said they had great discussions in which they felt they solved problems of the world while also talking about basketball. “All-in-all, it was wonderful and a special time” to have spent it with Schnaitter. 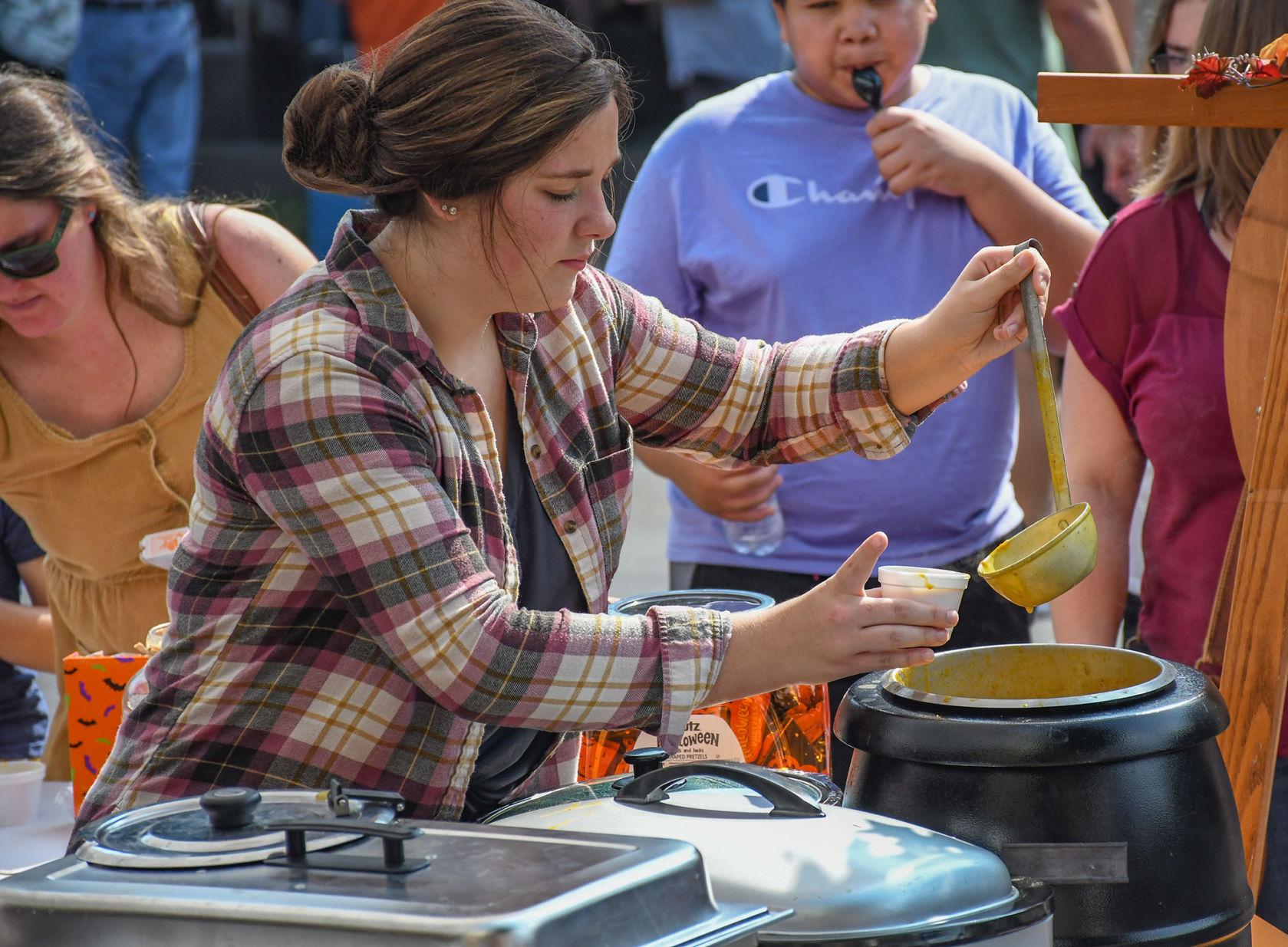 Above right: Ashley Miller dips up some soup for a customer at the Gallery 115 booth at Saturday’s Soup, Stew, Chili and Brew. It was a busy day for all the booths with many selling out by the middle of the afternoon.

Local police have arrested and charged a Hanover man for burglary and other charges in connection with an investigation into an recreational vehicle joyride that took place at SuperATV Inc. on July 3.

Over the ensuing months, Perkins developed a suspect in the case and submitted all evidence obtained during his investigation to the Jefferson County Prosecutor’s Office. On Oct. 7, an arrest warrant was issued and served on Thomas M. Freeman, 28, of Hanover. He was arrested by Jefferson County Sheriff’s Deputies and lodged in the Jefferson County Jail on a $10,000 cash bond

Freeman has been charged with Burglary, a Level 5 felony; and Theft and Criminal Mischief-two counts, all Class A misdemeanors.