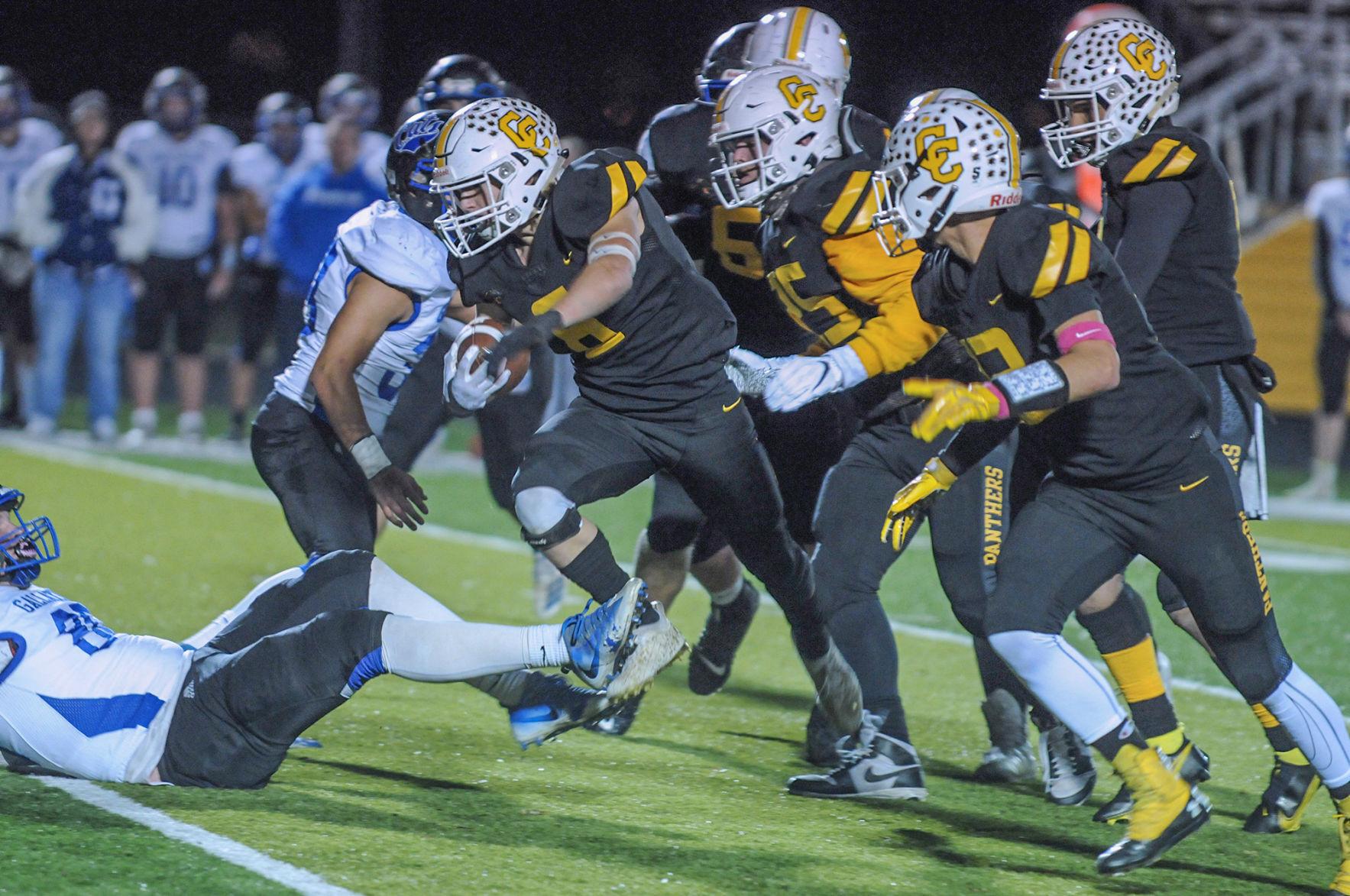 Carroll County running back Zayn Satchwell (with ball) drives through the Gallatin defense with some help from his teammates during the Panthers’ football playoff win over Gallatin County on Thursday.

Switzerland County and Carroll County each have recorded another death due to COVID-19.

On Friday, the Indiana Department of Health announced Switzerland County’s 12th death during the pandemic while the Kentucky Department for Public Health reported Carroll County had recorded its 28th death.

Jefferson County’s death toll during the pandemic remains at 99 while Trimble County remains at 17. The overall death toll for the Courierarea is now 156 in the four counties.

King’s Daughters’ Health will host a COVID-19 booster shot clinic from 8 a.m. to noon on Tuesday at it main campus medical building in Madison, 1373 East State Road 62. It is a walk-in event with no appointments necessary. Participants must meet eligibility requirements.

Booster vaccines are also available at the Jefferson County Health Department for all who are eligible. Schedule your booster vaccine by visiting www.ourshot.in.gov or by calling 211. Walk-ins are accepted Monday through Friday from 9 a.m. to 3 p.m. 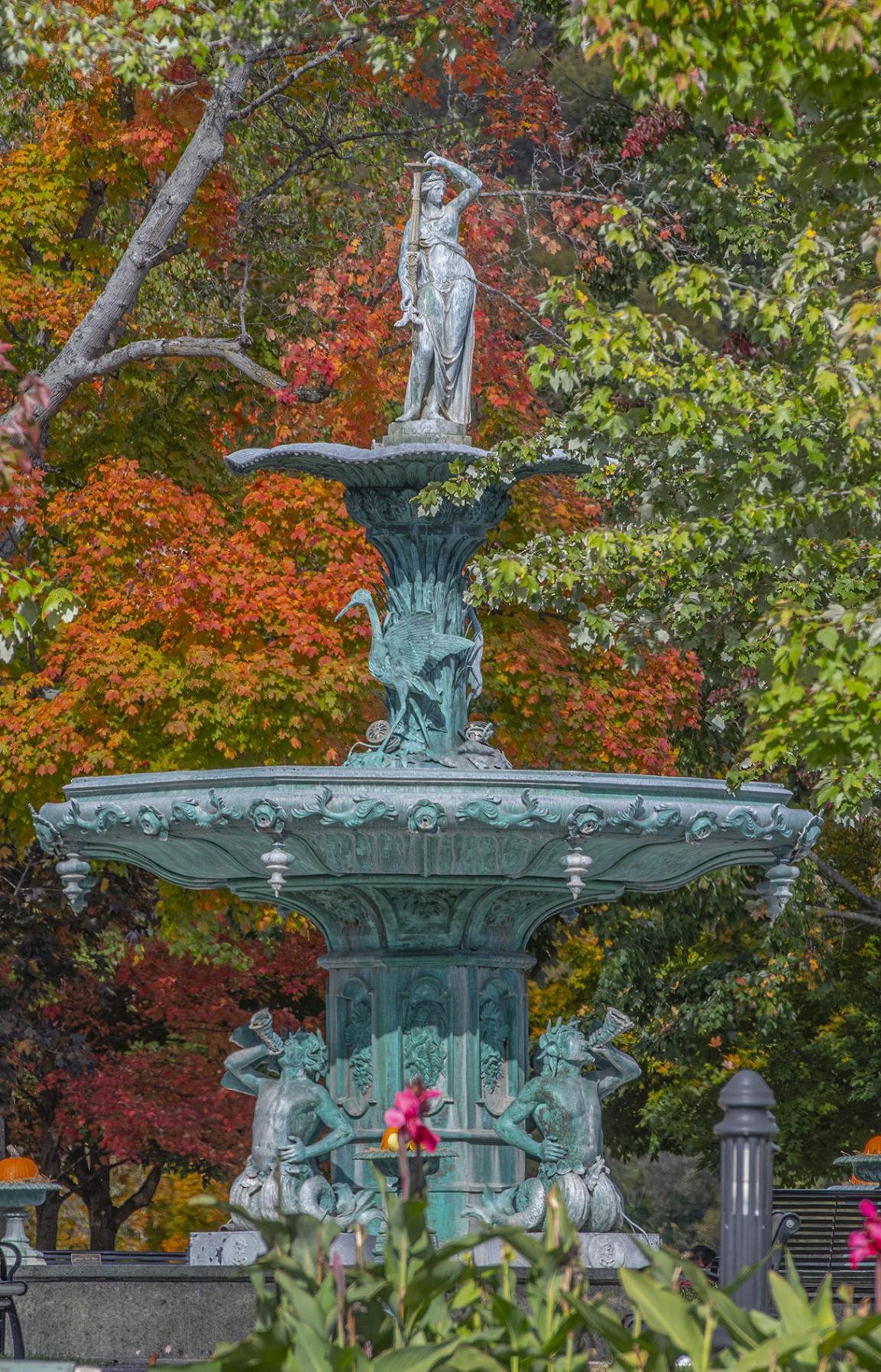 The colors of fall have taken a vibrant turn as cooler nights and shorter daylight trigger the changing of the seasons at the Broadway Fountain in downtown Madison. With overnight temperatures in the 20s, the fountain’s water pumps have already been turned off. More change will come on Sunday to area clocks when Daylight Saving time falls back one hour so set your clocks back at 2 a.m.

Dan Stephan, a 45-year veteran of the Madison Police Department, worked his last shift before retirement Friday. Stephan (center) pictured alongside Police Chief John Wallace (right) and Deputy Chief Ben McKay served in parts of six decades under seven mayors and 10 police chiefs — including Wallace twice. A lifetime lawman, Stephan’s not ready to put away his badge. He plans to take advanatage of the city’s recently adopted program to allow retired and former police officers in good standing to work part-time for MPD as patrol officers.

Dan Stephan had been working at Chain Belt Company in Madison about 3-1/2 years when he was laid off during the 1970s recession and needed a job. That’s when he saw a City of Madison advertisement seeking to hire police officers.

“I had always wanted to do police work, so I applied and I got the job, and I liked it,” said Stephan, who was 24 years old at the time. Shortly after, Chain Belt offered to call him back, and while he said he enjoyed his job there, he loved police work even more and stayed with the city.

Forty-five years after going to work for Madison Police Department on Aug. 29, 1976, Stephan is retiring. His last day was Friday — which coincides with his 70th birthday — when he steps down as a captain after serving as a shift manager since 2000.

“I enjoyed the work and stayed. I had no desire to go any place else,” he said, noting he actually worked another 13 years past qualifying for a full pension.

Even though Stephan is retiring, he plans to come back and work part-time for Madison Police Department. The city adopted new regulations allowing former or retired officers — in good standing — to continue working part-time as patrol officers.

“I will no longer be a captain and have my leadership role. It will be different, but I will adjust,” Stephan said. The closest former Madison police officer to Stephan in longevity is Bob Barnes, who was with the department 34 years from 1973 to 2007.

During his police career, Stephan has sometimes held off duty jobs like electrical work and carpentry, and he’s driven a truck to supplement his income. That was particularly the case while helping his wife of 52 years, Onita Stephan, get through college and go on to teach at Anderson Elementary School.

But except for part-time police work, Stephan said in the future he doesn’t plan to take on any other jobs or responsibilities. “I’m looking forward to having more free time,” Stephan, who resides on a farm near Canaan, said.

Stephan has worked under seven Madison mayors beginning with Warren Rucker in 1976. And he’s worked under 10 police chiefs with Bob Wolf being the longest tenured at 13 years under former Mayor Al Huntington. Stephan has served under current Police Chief John Wallace, which is in his second stint in that role, twice.

“Dan has been the glue of the department for 45 years,” said Wallace. “His leadership is second to none. He’s someone other officers can look up to and admire. We’ve been fortunate to have him as long as we have. He will truly be missed. This is bittersweet.”

Wallace said he’s not been looking forward to Stephan retiring because he’s been such an outstanding police officer. The department had birthday cake for Stephan Friday with plans to celebrate his retirement next month.

“It’s coming to an end, but I’m happy for him. He deserves it,” Wallace said.

Jefferson and Switzerland counties were awarded more than $2.5 million combined in state matching funds for local road projects through Community Crossings, a component of the Governor’s Next Roads program on Wednesday.

Jefferson County was allocated $1 million which County Highway Superintendent Bobby Phillips said will be used to asphalt pave 13 miles of roads in various locations throughout the county. “This is a huge help to Jefferson County,” he said, adding it “helps significantly to upgrading our existing road infrastructure needs.”

Additionally, Madison Deputy Mayor Mindy McGee said the city is receiving $947,694.55 from the fund. “It is the full amount we requested,” McGee said, noting the funds will be used as the city finalizes its plans for a $2 million road and sidewalk improvement plan.

To qualify for the funds, local governments must provide local matching dollars based on population. Jefferson and Switzerland counties have to provide a 25% match while Madison ‘s match is 50%.

“Community Crossings continues to have a transformative effect on communities across Indiana” Holcomb said. “The partnership between the state and local governments is empowering Hoosier cities, towns and counties to invest more and take on bigger projects than ever before to modernize their local transportation systems to meet the demand of our growing economy.”

The Community Crossings initiative has provided more than $1 billion in state matching funds for local construction projects since 2016. Communities submitted applications for funding during a highly competitive call for projects held in January. Applications were evaluated based on need and current conditions and impacts to safety and economic development. Funding for Community Crossings comes from the state’s local road and bridge matching grant fund.

“Community Crossings is one of the most important tools available to our local partners to support their efforts to improve local roads and bridges,” INDOT Commissioner Joe McGuinness said. “Rebuilding and improving local roads, while also addressing safety needs, promotes growth and enhances the business environment and quality of place across Indiana.”

The Jefferson County Board of Tourism approved incentives this week to help bring two regional professional bass fishing tournaments to Jefferson County in 2022 including the prestigious Indiana Bass Federation Classic.

Lucy Dattilo, president of Visit Madison Inc. and Sarah Prasil, VMI’s executive marketing director, said they were approached by Indiana Bass Federation President Kelly Hook about bringing the Classic and another tournament to the Ohio River at Madison and Jefferson County next year. The series most recently held its Classic at Madison in 2012.

Dattilo and Prasil asked for a $5,000 JCBT contribution plus three hotel rooms to assist with landing the events, which routinely draw more than 100 anglers and co-anglers and their families who stay, eat and shop in host communities. The events would include a spring tournament in May and the Classic in October.

“This is a no-brainer,” said JCBT board member Curtis Chatham. “This is right in line with where we want to go” because of what the Indiana Bass Federation tournament will do to bring visitors to Jefferson County.