With bids for the new Jefferson County Sheriff and Justice Center running higher than expected, Jefferson County Commissioners on Thursday approved a resolution authorizing the building corporation to increase the project’s bond issue to $45 million.

“The bids were a little higher than anticipated,” said Commissioners president David Bramer, citing the reason bonds will be increased from the original $42 million for the proposed 300-bed facility.

On Friday afternoon, the Jefferson County Jail Building Corporation met to officially amend the principal amount of the bonds to $45 million.

While the development means the county will pay slight more for the project, Bramer did noted one positive in that the county is “fortunate the interest rates have stayed where they have.”

The Commissioners approved letters of intent to four contractors who submitted lowest bids to lock in those offers contingent on the sale of the bonds.

Other bids for the electrical package were Banta Electrical Contractors of Indianapolis, $5,670,000, and Ready Electric of Louisville, $5,949,390.

Other bids for food service were from Stafford-Smith Inc. of Indianapolis, $470,291, and Wasserstrom Company of Columbus, Ohio, $546,130.

• Received information from Amber Finnegan, court services director, about new requirements related to Indiana House Bill 1068 that go into effect July 1. She noted the new law requires establishing an advisory council to review local justice system policies and procedures, and ensure they are receiving satisfactory responses. Bramer agreed to serve on the advisory council to represent the Commissioners.

• Patty Jackson, Southern Indiana Regional Planning Commission housing/special projects manager, was on hand to gauge the Commissioners’ interest in participating in submitting an application for a grant through the SIRPC for low-income housing and was given approval to do that.

• Awarded bids for equipment rental and labor for the county highway department to KLB Excavating of Austin, Dave O’Mara Construction of North Vernon, All Star Paving of Seymour, and Riverside Group LLC of Milton, Kentucky. The bids had been opened at the May 6 meeting.

• County Highway Superintendent Bobby Phillips presented the Commissioners with seven letters of intent for design contracts to be considered for replacing the bridge on Sugan Hollow Hill in Milton Township. Earlier this year, the county was notified that it will be awarded a $1,240,800 grant for the project from the Federal Highway Administration through the Indiana Department of Transportation, but work won’t begin until 2026.

• Gave permission to Surveyor Mike Pittman to seek bids for finding 35 cornerstones in Jefferson County that will also include taking photos of the cornerstones. One of the responsibilities of the surveyor is to ensure maintenance and verification of cornerstones or “section corners” in the county, and to do a minimum of 5%each year. 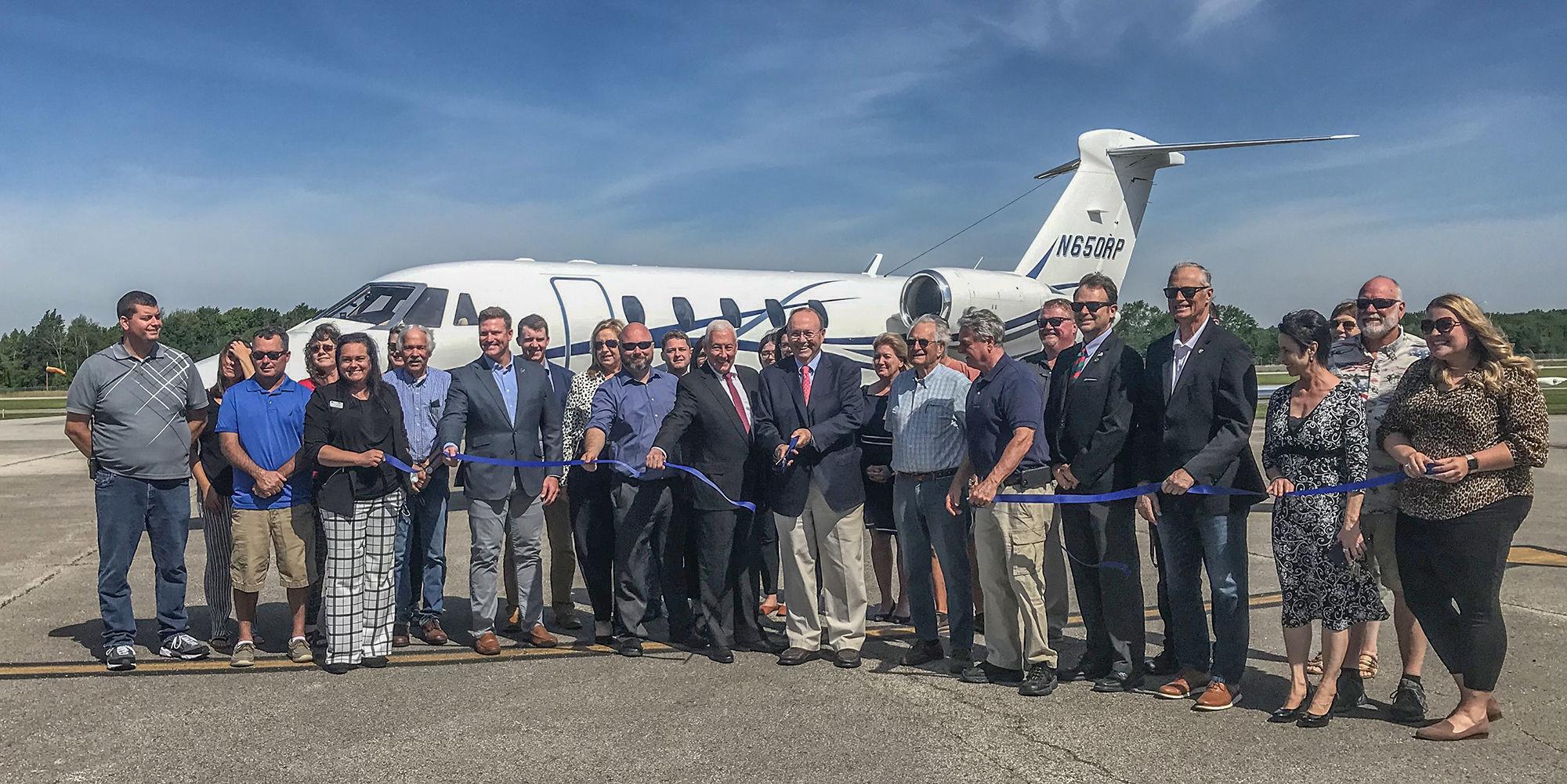 Madison Board of Aviation Commissioners President Dick Goodman (right center) is joined by US Rep. Greg Pence (left center), airport manager Brent Spry and other state and local officials to cut the ribbon to officially open Madison Municipal Airport’s runway to both south and north traffic Friday, May 21. The airport has long been restricted to only arrivals and departures from the south due to restricted air space at the former Jefferson Providing Ground, but Pence helped push through legislation allowing flights from both directions, providing safer takeoffs and landings under certain wind conditions. For additional coverage, check out our media partner WKMNews.com

Southwestern School Board on Monday hired a native of Orleans — the current guidance counselor at Orleans Junior-Senior High School — as the corporation’s new middle school principal.

Kristin Bye grew up in Orleans and has been guidance counselor at the junior-senior high school there the last 11 years. She will now leave home to become part of the Southwestern family.

“It seems very natural for me to be here,” said Bye after her official hiring at Monday’s Southwestern school board meeting. “It feels very home-like. It’s a good fit for me.”

Bye is replacing Jason Watson, who has been promoted to assistant superintendent at Southwestern and is wrapping up his sixth year as principal of the Southwestern Middle School.

“I have truly enjoyed my time in this role. I am excited about what lies ahead for Southwestern Middle School under the leadership of Kristin Bye,” Watson said. “She brings a unique mix of knowledge, skills and experiences that will benefit our students and staff. I look forward to working with her and wish her well as she takes Southwestern Middle School students and staff to new and higher levels of success.”

Bye, who was a health education teacher for six years at Bedford-North Lawrence High School prior to her tenure as a counselor, said she knew when she pursued an education degree in administration that it would likely mean leaving her hometown. “I have been prepared for that. I knew that was a strong possibility,” she said.

At the same time Bye said she wanted to go to a place where she would feel like she belonged.

“When I started looking, I wanted to be somewhere that I was a good fit” and the opportunity at Southwestern “was somewhere I could see myself applying.”

“I’m excited to be part of the Southwestern family,” Bye said. “I am truly impressed with everything I have seen.”

Based on preseason practices and other usage, members of Hanover’s Park Board are elated with the level of activity returning to Hanover Park and that should increase even more Monday as baseball and softball seasons open.

“I think it’s exciting,” said board member Treva Shelton. “I’ve not seen kids playing on those fields for years.”

“It’s been 20 years since I have seen this much activity,” board member Debbie Kroger added.

Parks and Recreation Director Scott Davidson said a total of 259 youths have registered — including 25 total teams with 20 from Hanover, two from Trimble County and three from Madison — with play getting underway at 5:30 p.m. on Monday after a brief opening ceremony at approximately 5:15 p.m.

Davidson said he has hired 12 part-time summer workers who have begun training as umpires, scorekeepers and concession help.

“I’ve been real pleased with them,” he said. “They seem to be excited about it.”

Most games will be played on weeknights with practice time available on weekends after noon on Saturday through Sunday if nothing is scheduled on the fields. Usage of the fields is on a first-come, first-serve basis, Davidson said.

Clerk-Treasure Keith Mefford noted there are plans for upcoming concerts at the Hanover Community Park amphitheater including an event with Matthew Williams, Frank Pearson and Friends, and Short & Company on Saturday, May 29, at 5 p.m.

The City of Madison on Thursday filed an injunction against the owner of a Jefferson County farm located within the city’s 2-mile buffer zone seeking to stop a swap meet, flea market and petting zoo with overnight camping from being held on North K Road near Madison.

Jefferson County Circuit Court Judge D.J. Mote held a hearing on the injunction late Friday morning with Madison Board of Zoning Appeals Attorney Devon Sharpe arguing on behalf of the city and the BZA and both Madison Director of Building and Design Brian Martin and BZA Chairman Scott Baldwin testifying.

Martin said he had received complaints about a recent swap meet and flea market that was held at property owned by Susan Smith at 2355 North K Road. He said the property is zoned Residential Agriculture and would require application to the BZA for a conditional use permit for the type of activity that took place at the site on a recent weekend and for which the group involved is advertising future events there throughout the summer.

“There were no permits in place,” said Martin, noting the permit process exists to protect the city’s zoning laws while allowing property owners some recourse to use their property beyond those defined uses as long as the owner can show that conditional use is no threat to public safety.

The process requires the property owner to file application with the BZA requesting conditional use. A hearing is then held where those for and against that use can be heard. Smith filed no such application prior to the recent swap meet and allowed the event to take place without proper approval and several neighbors and others sent letters, emails and showed up at last week’s BZA meeting to complain about heavy traffic, parking problems and noise the event caused for neighboring properties and their owners.

Several of the neighbors mentioned that North K Road is so narrow that it is ill equipped to handle crowds and events like those staged at Smith’s farm endanger both those in attendance and other residents should an emergency take place requiring firefighters or ambulances.

“The big thing with this type of event is having all your emergency planning in place,” Martin added.

Baldwin, a member of the BZA for the past five years, has dealt with the North K Road property previously when Smith and a different event organizer were before the BZA in July 2019 concerning a plan to hold music events at the site under similar circumstances. That permit drew heavy opposition and was never granted after the issue was tabled without a decision.

About a dozen supporters of the recent event attended Friday’s court hearing while many others waited outside the courthouse after Mote limited attendance due to the ongoing COVID pandemic but allowed the hearing to be live-streamed.

Some of those outside challenged the city’s authority over the buffer zone — especially since the BZA is mostly comprised of city appointees. However, the five-member panel does include Rick Ferris, a county resident who lives in the buffer zone.

Sharpe explained that city-county relationship during his closing arguments earlier in the courtroom, noting the city and county have already resolved their concerns about Madison’s authority over the buffer zone and details on who will enforce zoning laws in that transitional area. Madison holds authority over zoning and conditional usage while the county enforces issues like nuisance complaints and situations.

Smith was seated beside her son Will Smith throughout the hearing. She responded to Mote’s questions but neither she not her son offered any evidence nor called any witnesses.

Mote thanked everyone in the courtroom for their courtesy during the hearing and said he will “take the case under advisement and work very hard to get a ruling out.” A member of his staff said later on Friday that Mote hoped to rule by this morning.

Brett Clark, organizer of the swap meet, was one of the supporters inside the courtroom wearing a blue T-shirt promoting the family farm flea market. In an interview outside the courthouse afterwards, Clark said his group is in no way related to the group promoting music in 2019 and that he thought necessary permits were in place.

He said the event planned for today is “officially canceled” and his next move is to get with the city to see what is needed to obtained the proper permitting moving forward. However, Clark did note that with visitors coming in from as far away as West Virginia, it is likely that some people will show up at the farm and not be turned away since they are planning to camp there for the night.