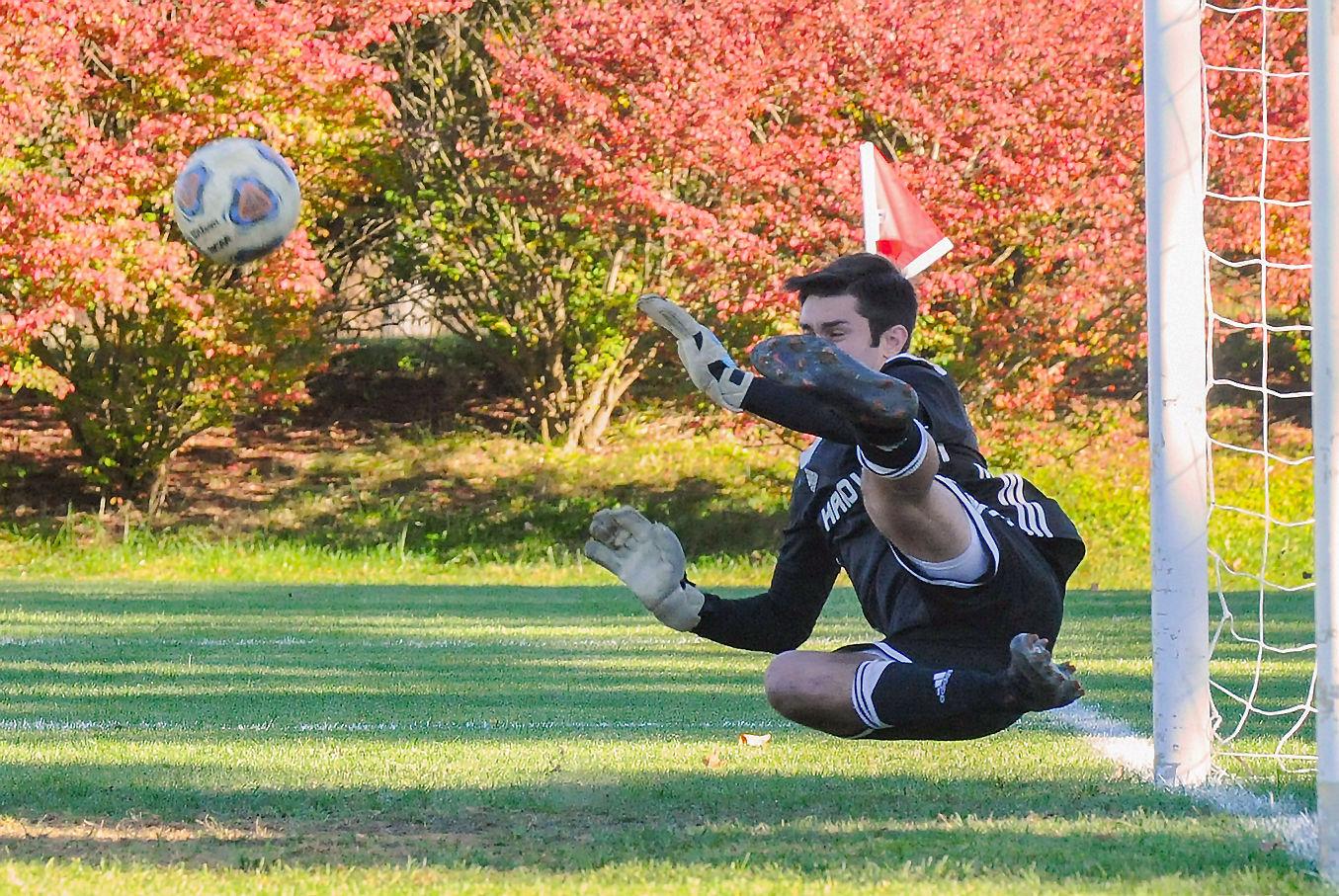 Lead actors (from left) Mia Mires, Jack Heckler, Saba Chabukashvili and Violet Reetz will play Will Shakespeare and Viola De Lesseps in this week’s production of “Shakespeare in Love.”

“Shakespeare in Love” — the fictionalized story of how William Shakespeare came to write “Romeo and Juliet” — will be performed by Madison Threatre this weekend at Opal Sherman Auditorium.

The play will be performed by students in Aaron Kelsey’s Advanced Theatre class at Madison Consolidated High School with Saba Chabukashvili and Jack Heckler sharing the role of Will Shakespeare and Violet Reetz and Mia Mires sharing the role of Viola De Lesseps.

“Shakespeare in Love” is based on the screenplay by Marc Norman and Tom Stoppard, and was adapted for stage by Lee Hall.

In the story, Shakespeare is faced with writer’s block and a deadline for his new play when he encounters Viola, a woman who would stop at nothing to appear in his next play even though women at the time were prohibited from acting. Through all of that, Will and Viola fall in love, although Viola’s father had committed her to marry Lord Wessex, which prevented Will and Viola from being together.

The play provides romance and drama, but there are also comedic elements as it weaves its way toward Shakespeare’s creation of “Romeo and Juliet.”

The production presented several challenges to the young actors.

Additionally, the students noted the awkwardness of doing romantic scenes with classmates, made more uncomfortable by doing them in front of an audience.

Chabukashvili said he’s finding it daunting to act out the emotions of Will and Viola being “truly in love.” He spoke of an situation in the play when his character ha to be broken down sad with his character expressing that range of emotions on stage. He described it as “awkward and difficult emotion.”

All the actors are veterans and have performed in other productions at Madison Consolidated High School. However, Chabukashvili and Heckler said it’s the first time they have had lead roles, and both feel honored to have been selected. Reetz and Mires most recently had roles in last spring’s musical 9 to 5, and even though “Shakespeare in Love” is a play, they said there is a short moment when there’s some singing.

For Chabukashvili, he likes how theatre is helping him develop skills to give him confidence when he begins pursuing a career. “It gets me out of my comfort zone, and will help me with speaking and presentations” in a future job he might have.

Tickets cost $15 for adults ($10 for matinees) and $5 for students K-12 if purchased online at our.show/madisontheatre. If purchased at the door, each ticket price is $2 more.

“We’re excited to get the season started,” said Kelsey, noting that Madison Theatre plans three more productions this year beginning Dec. 2-5 with “A Christmas Story” and “My Fair Lady” on March 10-13 followed with “MASH” on April 21-24.

News
Hanover hears overview on changes to building and zoning

Hanover Building Inspector and Ordinance Officer Rick Schnebelt presented an overview on the operation of that office to Hanover Town Council last Tuesday including possible updates to fees, revisions in the way services are defined and a requirement that contractors register with the city.

Schnebelt said the overall goal is to more effectively manage the Building and Zoning Office and that fee changes would make Hanover more consistent with surrounding communities.

He suggested requiring all contractors, developers and sub-contractors with building projects in Hanover be required to register with the town. Schnebelt said requiring registration for any building project or extensive remodeling project is a way to protect the community’s residents and that there needs to be a way to verify that contractors are licensed and have insurance to prevent people from being taken advantage.

“I don’t want anyone to call someone to do some work for them, and completely be taken advantage, which has happened,” he said.

Additionally, by requiring registration with the town, Schnebelt will have a means to monitor the work that is being done by the contractors, developers and sub-contractors.

No action was taken on the suggestions and any proposed updates to planning and zoning fees and ordinances would need approval of the council by ordinance.

• A discussion from past meetings continued concerning some streets in the vicinity of Hanover College, and whether they are owned by the town or the college, and how that impacts services to residents there.

“It’s something that’s not going away and I don’t want it to,” said Mefford. “It’s important to everybody who lives on these streets ... They need to know who can respond, whether it’s snow removal, maintenance of the streets, water leaks and other issues.”

• Town Marshal Shane Caldwell reported that the town’s SoToxa Field Mobile Tester has already aided in two drug-related arrests. He also noted that the AED (Automated External Defibrillator) has been deployed three times in the last month in life-saving situations. The town currently has two AEDs, and Caldwell would like to get one more so that each of the three officers carry AEDs. Both devices were recent purchases after Council approval.

The Jefferson County Animal Control Advisory Board discussed plans last week to take a more active role in policy decisions for the animal shelter as a new shelter director takes over later this month.

A week earlier, the advisory board recommended Lindsay Stultz-Weyer, the current Animal Control Officer for Switzerland County, be hired for the position, and County Commissioners approved that hiring Thursday.

Board member Hannah Fagen noted the suggestion were “policy things the board really needs to review with the new shelter director” rather than asking Toler to begin implementation. She noted Toler is currently following guidelines already in place, and has been “doing a really great job of keeping things under control and helping out as we bring the new director in. We appreciate that so much.”

Fagen said shelter’s recent problems were a reflection of the advisory board being inactive by meeting just four times per year, and said the board’s decision to meet monthly is a “positive step” forward.

“The board needs to do a full review of our policies for the shelter,” Fagen said, “and be more involved and make sure we’re going in the right direction, so we don’t end up back” in the position where shelter had been. She suggested the board plan a working meeting to review all animal shelter policies.

Board member Warren Auxier said holding monthly advisory board meetings “had been brought up a couple of times in the past, but at that time our shelter director did not see that was necessary and did not want that to take place. We ended up that the shelter director’s recommendation had been followed on the quarterly meetings.”

Auxier agreed that monthly meetings, along with the board reviewing and updating the animal shelter policies, are the best way to move forward but also added that it is also important to consider how the animal shelter is funded.

“I know County Council on short notice has stepped up and done some additional things this year,” Auxier said. “We still have a shelter that is severely under-funded for what needs to be to provide the type of care.” Auxier noted shelter operation needs to be government-funded rather than “this concept that we’re going to run it on donations. We don’t run anything else on donations.”

He noted that while donation might be appropriate to fund events like Christmas parades and festivals “we don’t ask our police department to go out and get donations for gasoline and bullets” so the animal shelter should not have to either.

Fagen agreed that donations are great for extra amenities for the animals but “operational expenses should be covered by funding. We should not scramble for operational funding.”

• Toler said the shelter currently has 80 cats and 17 dogs. “My largest concern is with the cats that we’re going up instead of down,” said Auxier, noting more recently the shelter had 60 cats. “We’re losing ground there so there’s going to have to be some serious discussions and decisions made.”

Toler said they continue to receive litters of kittens coming into the shelter. “When we get three or four litters come in during one week that makes our number jump substantially.”

Auxier, who is also president of the Madison-Jefferson County Humane Society, said the humane society has been helping fund spay/neuter at $45 per locally-adopted cat to encourage adoptions. However, if the numbers on cats continue at the current rate “I’m not sure they’re going to be in a position to fund the $45 toward every cat” going out of the shelter. “That is a funding change that could be coming up in the next month or two months.” He said the Humane Society’s shelter has also provided that service to the general public, which he hopes will continue.

“I’m just very concerned that unless there are programs put in place on cats differently than what we’re doing now that there are going to have to be some hard and very uncomfortable conversations,” Auxier added. “I’m not seeing a clear path around that. One does not want to go that direction, but it’s the reality of the situation.”

• Voted unanimously to recommend appropriations be made by the county for a concrete slab for kennels. Toler said outdoor kennels are the shelter’s most urgent need at this time. Board member Ray Denning, a member of the County Council, said he will discuss the appropriation with the County Council at its meeting Tuesday, and also consider other ways to fund the concrete slab.

Commissioners member Bobby Little had received a cost estimate of $5,600 for the concrete slab. A total of 20 kennels are in the process of being purchased for the animal shelter at a cost of $18,000, which is $2,000 less than the previous estimate for the kennels. Fagen noted the City of Madison is contributing $10,000 toward the kennel purchase.

With the observance of Veterans Day on Thursday, Nov. 11, and no US Postal Service delivery on that federal holiday, Thursday’s edition of The Madison Courier will be delivered one day later on Friday, Nov. 12.

Saturday’s newspaper is scheduled for normal delivery on Saturday.

In addition to the postal service, the Veterans Day holiday will result in several other schedule adjustments.

City of Madison offices will be closed Thursday along with the city’s Street Department and Transfer Station. Thursday Trash and Recycle will be delayed one day and the Transfer Station will re-open Friday at 8 a.m.

All Jefferson County government offices will be closed Thursday along with Hanover Town Hall.

All Indiana Bureau of Motor Vehicles license branches will be closed Thursday.