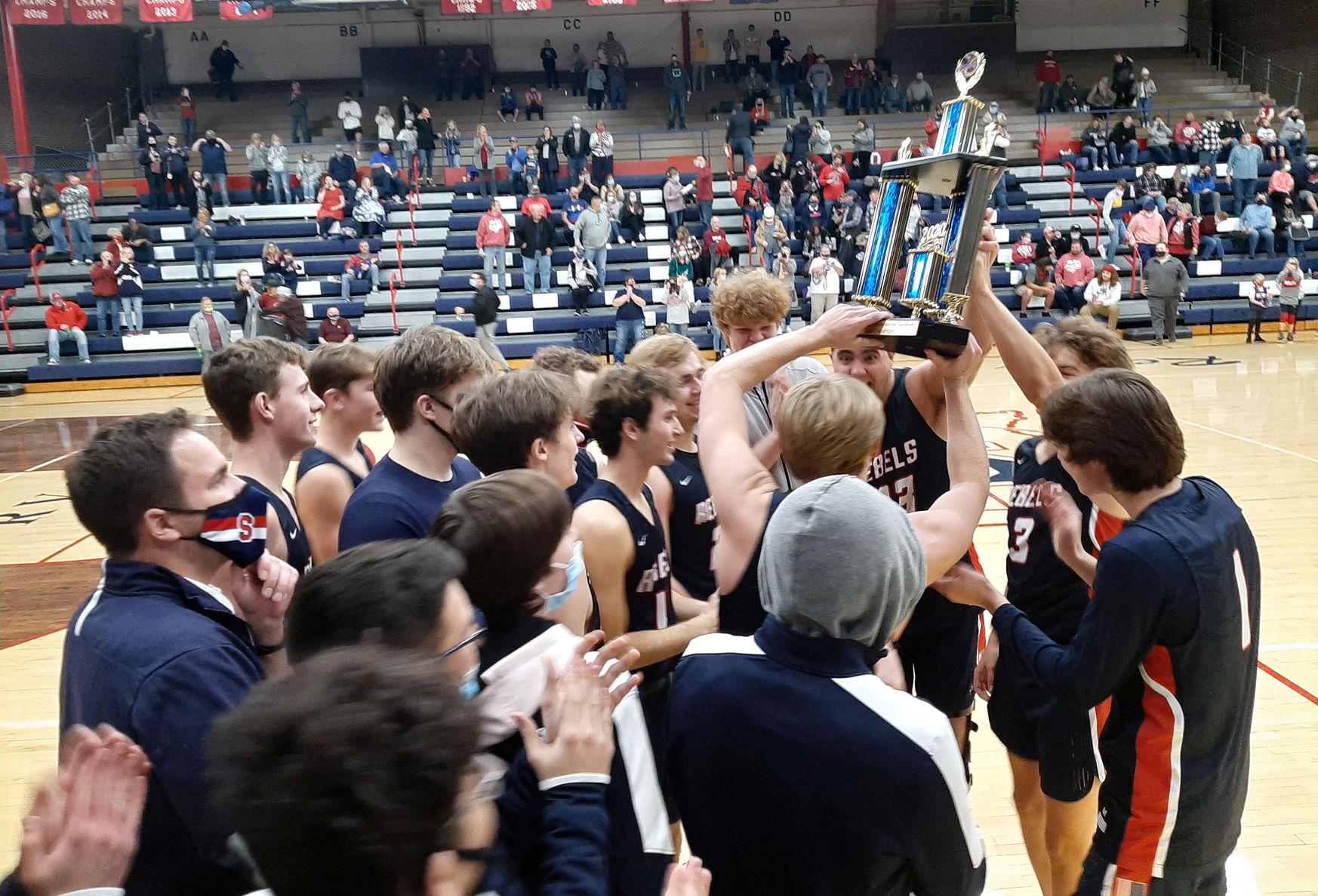 Southwestern’s Rebels receive the championship trophy after beating Danville to win the JCIT title on Wednesday.

Surviving relatives John and Lynda Knoebel (right) listen as Madison Police Chief John Wallace reads from a prepared statement under an umbrella held by Mayor Bob Courtney at a memorial service on Wednesday for Madison Police Officer Frank J. Knoebel on the 90th anniversary of his death in the line of duty. Knoebel died after being shot twice while apprehending burglary suspect Walter Carlin on Dec. 30, 1930, in Madison.

The wreath placed at the plaque honoring and memorializing Officer Frank J. Knoebel at Madison Police Department, who was killed in the line of duty 90 years ago Wednesday.

Madison Police Officers salute the memory of Officer Frank J. Knoebel, who was killed in the line of duty 90 years ago on Dec. 30. 1930.

Pictured is Madison Police Officer Frank J. Knoebel, who was 43 at the time of his death in 1930.

Madison Police and family members a generation or more removed held a brief ceremony Wednesday recognizing the 90th anniversary of the only Madison Police Officer to ever die in the line of duty.

Knoebel was transported to nearby King’s Daughters’ Hospital where he died from his wounds about an hour later. Knoebel, who was widowed, was survived by his son, Jimmy, his father and a brother and three sisters. He was buried in Springdale Cemetery in downtown Madison.

A change of venue was granted in the case and Carlin’s trial was moved to Ripley County where he was convicted of first-degree murder and sentenced to death in Indiana’s electric chair in a verdict read by foreman Evert Waters after the jury took just two hours to both convict and sentence Carlin.

During the trial, prosecutors told jurors about Carlin’s background. He earlier had been sent to Pendleton Correctional Facility for burglary in 1925 but broke out of the facility after being made a trusty.

Carlin traveled west to Chicago and was spending time there when he was arrested for a fight with an Army officer. Fingerprints identified Carlin, who also went by the alias Frank Allen, as an escapee from Indiana and he was returned to Pendleton.

Carlin had appealed the convicted in February of 1933.

According to affidavits in State vs. Carlin, Carlin had just been paroled on Dec. 22, 1930, when he traveled to Jeffersonville before spending that night in a Louisville hotel. He returned to Jeffersonville the next day and had Christmas dinner with his father and went to a show with his aunt and uncle that evening.

Now out of money and with no place to stay, Carlin “became disgusted” and stole a Whippet coupe and headed out for Linton, Indiana. While driving through Salem he robbed a hardware store of $11 cash, two revolvers, a shotgun and some shells and two boxes of cartridges and drove on to Bloomington, Indianapolis, Columbus and finally Madison.

The night he reached Madison, Carlin robbed Riddle Brothers Hardware but while in the store someone came in and he forced him to “stick ’em up” and let him out at the front door.

Carlin left his shoes in the hardware store and, since the weather was cold, he broke into a garage and tore up an old overcoat, wrapped his feet with the rags and slept in his car the rest of the night.

The next day he roamed about downtown Madison until about 1 p.m. and while walking down an alley he came to the basement stairway of the Odd Fellows Building and went downstairs where it was warm. He sat down in a chair in front of the furnace and fell asleep until awakened by janitor Arch Monroe, who questioned him where he had been, where he was going and what he was doing there.

Monroe went out shortly and met Knoebel, a policeman who was dressed in plain clothes, and told him about the man he had just left in the basement and asked if he would go down there with him.

Knoebel went with Monroe to the basement where they found Carlin asleep. Knoebel talked with Carlin for a while, asking him the same questions Monroe had asked earlier. He said he was from Jeffersonville and was going to Carrollton, Kentucky, to work.

Knoebel then left telling Carlin that he would see if he could locate him a pair of shoes. Knoebel returned shortly later with Police Chief Charles Stewart, who also questioned Carlin. After talking with Carlin a few moments, Stewart and Knoebel walked back to coal bin away from Carlin and talked together about the probability that Carlin was connected to the robbery at the hardware the night before. They decided Stewart should leave to further investigate.

Stewart later returned to ask Carlin what size shoes he wore, and told Carlin to remain there with Knoebel while he went to find a pair of shoes for him.

Soon after Stewart left, Carlin got up out of his chair, stretched himself and walked around the furnace near the stairway saying he wanted a drink of water. Monroe said he would get him a drink and when Monroe started to get the water, Carlin started to run up the basement stairway.

Knoebel grabbed Carlin and told Monroe to “grab that gun.” Carlin pulled away and shot Knoebel two times. As soon as Knoebel was shot he let loose of Carlin and cried out two or three times, screaming like he was in pain and ran to the top of the stairway. Carlin followed but was caught between the two cellar doors which fell down upon him.

Before he could free himself Stewart returned and with the assistance of others, arrested Carlin.

Police found two revolvers on Carlin and he was taken immediately to the county jail. Knoebel was taken to King’s Daughters’ Hospital where he died about one hour later.

The conviction was upheld by the state Supreme Court but the opinion cited that there was a question as to Carlin’s sanity and a test had not been made at the trial.

Carlin was awaiting execution on death row in Michigan City when in 1933 he was granted clemency by then-Gov. Paul V. McNutt, who commuted Carlin’s sentenced to life in prison with that sentenced commuted in 1949. He was released later that year — after serving 19 years —and returned to his home in Jeffersonville.

McNutt acted in the case after Judge Frank Gardner, who had presided over Carlin’s trial, called the governor to recommended commutation on the basis of unbalanced mentality.

The COVID-19 death toll continued to climb in Jefferson County this week as four news deaths were reported on Thursday and Friday, bringing the overall death toll locally to 36 people.

In addition to the new deaths, there were 63 new cases over the two reporting days bringing the total number of local residents who have tested positive for the virus to 2,185 since March. A total of 12,387 residents have been tested overall.

Meanwhile, Gov. Eric Holcomb and top health officials called for patience earlier this week while early doses of vaccine against COVID-19 are administered to health care workers and residents inside long-term care facilities.

Holcomb also announced he was extending his statewide mask order and restrictions on crowd sizes for three more weeks, but lifted a pause on non-emergent, elective hospital procedures.

Nearly 76,000 residents had received their first dose of vaccine as of Tuesday morning, Indiana’s chief medical officer, Dr. Lindsay Weaver, said during Holcomb’s weekly briefing on the state’s coronavirus response. More than 110,000 more Hoosiers have scheduled appointments to get shots through next Monday.

As of this week, CVS and Walgreens have started administering an additional 40,000 doses set aside for long-term care residents and staff, Weaver continued.

By the end of the week, Indiana will have received 146,250 doses of the Pfizer vaccine and 152,500 doses of the Moderna vaccine, she noted.

But while it may appear that there are “a lot of extra” vaccine doses, the weekly allocations the state gets moving forward will be lower than the initial shipments, Weaver said, adding that vaccinations have been “limited” over the holidays. The pace is expected to pick up in the coming weeks, she said, and so far, no doses have been wasted or expired.

Weaver said state officials are continuing to focus vaccination efforts on frontline health workers and residents in long-term care facilities. Indiana health officials hope to have updated guidelines next week indicating who will be next in line for vaccines.

“The goal is to get vaccine in the arms at the highest risk in our health care settings,” Weaver said. “I want to stress that we are moving in a very intentional order of eligibility for vaccines. We want to ensure that we have enough vaccines before we open up vaccinations to additional groups.”

Still, if hospitals have extra vaccines, Weaver advised to “go ahead and get the vaccine into people” — even those outside of the current eligibility hierarchy.