A house considered historically significant at 707 Walnut Street and the Chapel at Springdale Cemetery were among properties recommended for city of Madison grants at Tuesday’s PACE meeting.

Both structures are seeking a $25,000 dilapidated structures grants and are now recommended for funding when the Board of Public Works and Safety meets next week to consider final approval.

The property at 707 Walnut Street, owned by the Cornerstone Society, has been determined to have once been the property of William Anderson, one of the major underground railroad conductors in Madison and the nation.

Link Ludington, president of Cornerstone, said the property “is a structure that’s significant not for its architectural characteristics but for its historical associations. It’s not a project that we planned to get involved in, but we learned of the historical association and the fact that it had already been approved for demolition, and we were forced to take action with very limited information.”

He said Cornerstone’s “overall goal is to salvage the structure that has been neglected and allowed to deteriorate” and return it to a worthwhile use that celebrates the history of the Georgetown neighborhood that became the center for the underground railroad activity in Madison.

Ludington said initial plans for the structure were that once restored it could be utilized as part of Cornerstone’s revolving fund program to then sell that home and use the proceeds to restore another building in Madison’s historic district. However, recent discussions have suggested using the building for workshops and as a meeting space related to historical preservation. However, Ludington said he doesn’t envision it being used that way for the long term.

John Muessel, secretary-treasurer of the Springdale Cemetery Association, spoke in support of restoring the Chapel at the cemetery. “It is a beautiful building. It just needs a lot of love to get it back into shape.” Because maintenance and record-keeping consumes the cemetery’s budget, there’s no funding left for the cemetery association to do the project without outside support. In addition to the PACE grant, the association has also reached out to the County Commissioners, while also seeking additional community support. “We hope we can get enough donations” that will provide what’s needed to do the work, he said.

There is also the need for drainage repairs at the Chapel due to water that’s been going into the basement, along with improvements to the interior, Muessel added.

By restoring the Chapel, the facility could be used by the general public for memorial services, burials during bad weather, cremation services and other events. “It would help the community because it’s part of the history of our community in a cemetery that’s been there since 1839,” Muessel said.

There were two properties in which amendments were approved to the PACE projects. Ryan Rodgers appeared on behalf of 1001 West First St., owned by John Bruns, because of more extensive deterioration to the property that increased the PACE award from $22,445 to $25,000. Matt Chandler asked that his project at 111 East Second St. be changed from a regular grant to a dilapidated structure grant of $25,000, in which an investment $1.5 million is being made to develop a former livery stable, factory and warehouse into The Chandler: Madison’s Boutique Hotel.

Nicole Schell, the city’s director of planning, presented the PACE board with proposed guideline changes, and all were approved.

A fourth grant category was established called “curb appeal.” Schell said it is similar to the downtown rehabilitation grant but will be specifically for the hilltop that would have a maximum grant match of $5,000. “This would include exterior work that is visible from the right of way including exterior wall repairs, doors, windows, shutters and other exterior elements,” said Schell, who noted the determination of whether the structure is visible from the right of way would likely be made by the city’s planning department staff.

A change was also made to the dangerous buildings grant in which infill construction is a requirement. Schell asked that the guidelines require infill construction be completed within two years with final disbursement of funds being held until that is done. “We’ve had a couple of grants get paid out that haven’t completed their infill yet,” said Schell, noting that change will help the city staff to better address that issue.

The guideline changes will also allow work to begin before grant approval for dilapidated structures and dangerous buildings grants only on properties that have been deemed unsafe by the building inspector.

The board also approved establishing PACE target areas for 2023 including Walnut Street in downtown Madison and the Pinehurst Addition on the hilltop.

Schell recommended the establishment of a sub-committee to set up guidelines for the $325,000 Paul Bruhn Historic Revitalization Grant that was awarded to the city of Madison. The grant assists properties and property owners who do not have the financial means to complete rehabilitation work or properties threatened by demolition due to neglect. Because the guidelines are more extensive for that grant coming from the National Park Service, Schell said they will need to be set up separate guidelines from what are required for PACE.

Jim Bartlett was elected chairman of the PACE board for 2023 while Steve O’Rear was elected vice chairman.

The next deadline for PACE applications is Feb. 6 with the next meeting March 14. 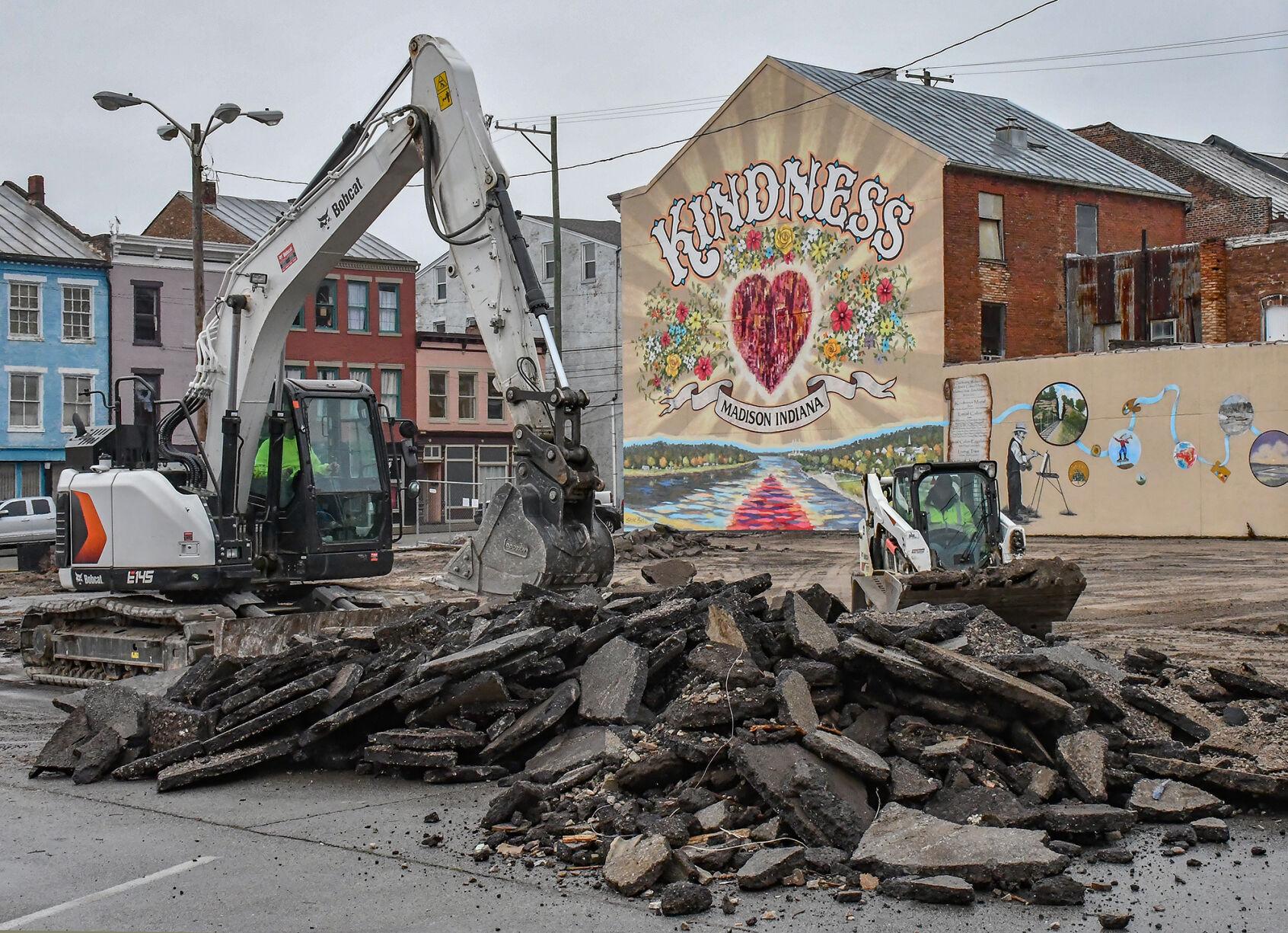 Workers used a track hoe and a Bobcat to tear up and remove asphalt in the Mulberry Street parking lot this week as construction on the new Mulberry Street Arts Corridor got underway.

Madison Consolidated Schools will soon have its own technology team in place after the hiring of three Jennings County staffers at Wednesday’s school board meeting.

The school corporation’s technology operations have been out-sourced in recent years, but Superintendent Dr. Teresa Brown, who previously worked at Jennings County, said the decision was made to bring operations in-house after canceling a contract with Five Star Technology Solutions last month.

“It just wasn’t fitting the needs we had in Madison so we wanted to have a more efficient system that we felt like we would have by hiring our own team instead of out-sourcing technology,” Brown said, noting the school corporation’s staff was surveyed about hiring an in-house technology team. “There was definitely an interest and a need based on their responses, so that’s the direction we took.”

All three begin work with Madison Consolidated Schools on Monday, Jan. 30. They will join Alex Hobson, technology coordinator, who was previously the only MCS technology employee who was not provided by Five Star. The technology staff will additionally include Molly McCulley, a data management specialist who assumed that role last summer.

“This will serve our students and staff more efficiently” because there will be personnel available locally to provide support more promptly when needed while also saving the school corporation money, Brown said. “They’ll be here on staff in our buildings.”

In another personnel matter, Lori Slygh was hired as assistant director of programs, effective March 27. Slygh, currently a counselor at Southwestern High School, had served two years on the Madison school board, completing her term at the end of last year.

Brown said Slygh will work under Tara McKay, assistant superintendent of special programs, as part of the process of replacing other personnel that have left the school corporation. Shelli Reetz, the former director of Student Services, departed last fall and Collette Bronkella, who resigned as the preschool coordinator effective Jan. 4.

“So, instead of hiring two, we’re hiring one position and sort of consolidating them together,” Brown said.

Slygh’s start date at Madison will be right after spring break for both Southwestern and Madison. “She wants to work with her kids (at Southwestern) and we respect that. It gives her time to finish up with the seniors.”

The Dr. Martin Luther King Jr. Day holiday will be observed on Monday, Jan. 16, and include a celebration of his life at Trinity United Methodist Church

The celebration will take place at the church, 412 Main Street, with a video presentation at 11:30 a.m. and the program beginning at noon.

Keynote speaker will Laurent Che, a storyteller and poet from Cincinnati, with the theme “Courage is Love — A Tribute to the Rev. Martin Luther King Jr.” Rev. A.D. Reed Jr., pastor of St. Stephen’s A.M.E. Church in Hanover, will reflect on the life of Dr. King.

Musical selections will be provided by Helen Mumphrey, a pianist/singer from Carrollton, Kentucky, with singing also by the Rev. Harvey Leggett, pastor of Broadway Baptist Church in Madison.

The program is free to the public and Bag lunches for take out will be available with donations accepted. The event is sponsored by the Jen Era Jeff Order of Eastern Star with assistance from Eureka Lodge No. 30.

In a related event, The Lanier Mansion State Historic Site will be offering free tours on Monday at 10 a.m., noon, 2 p.m. and 4 p.m. in observance of Martin Luther King Jr. Day. Tours are first come, first served with a maximum tour capacity of 20.

Hanover College community and alumni will observe Monday’s holiday at the Clearinghouse/House of Hope, 100 East Second St., from 9 a.m. to 10:30 a.m. by donating food and working with House of Hope to sort food and prepare the pantry for local clients.

Meanwhile, all offices for the city of Madison, town of Hanover and Jefferson County government will be closed Monday in observance of the Martin Luther King Jr. federal holiday. The Madison closing on Monday includes trash, recycling and compost with those services delayed by one day the week of Jan. 16-20.

All Indiana Bureau of Motor Vehicle branches will be closed Saturday, Jan. 14, through Monday, Jan. 16, for the holiday and there will be no US mail deliveries on Monday, Jan. 16.

One new death due to COVID-19 was reported by the Kentucky Department of Public Health this week in Trimble County, increasing the county’s overall death toll during the pandemic to 48.

Death totals remained the same in other area counties with Jefferson County at 164, Carroll County at 54 and Switzerland County at 21.