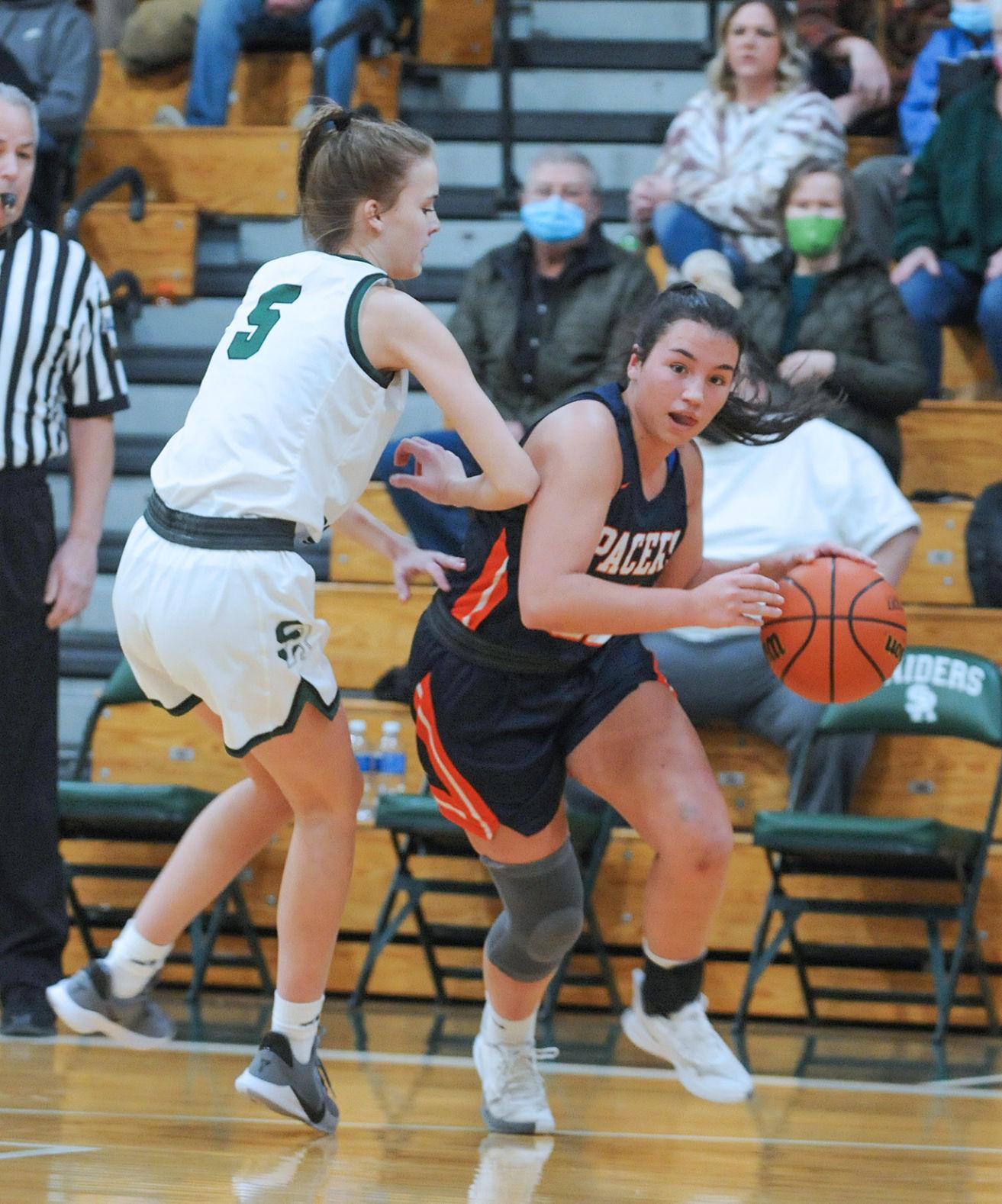 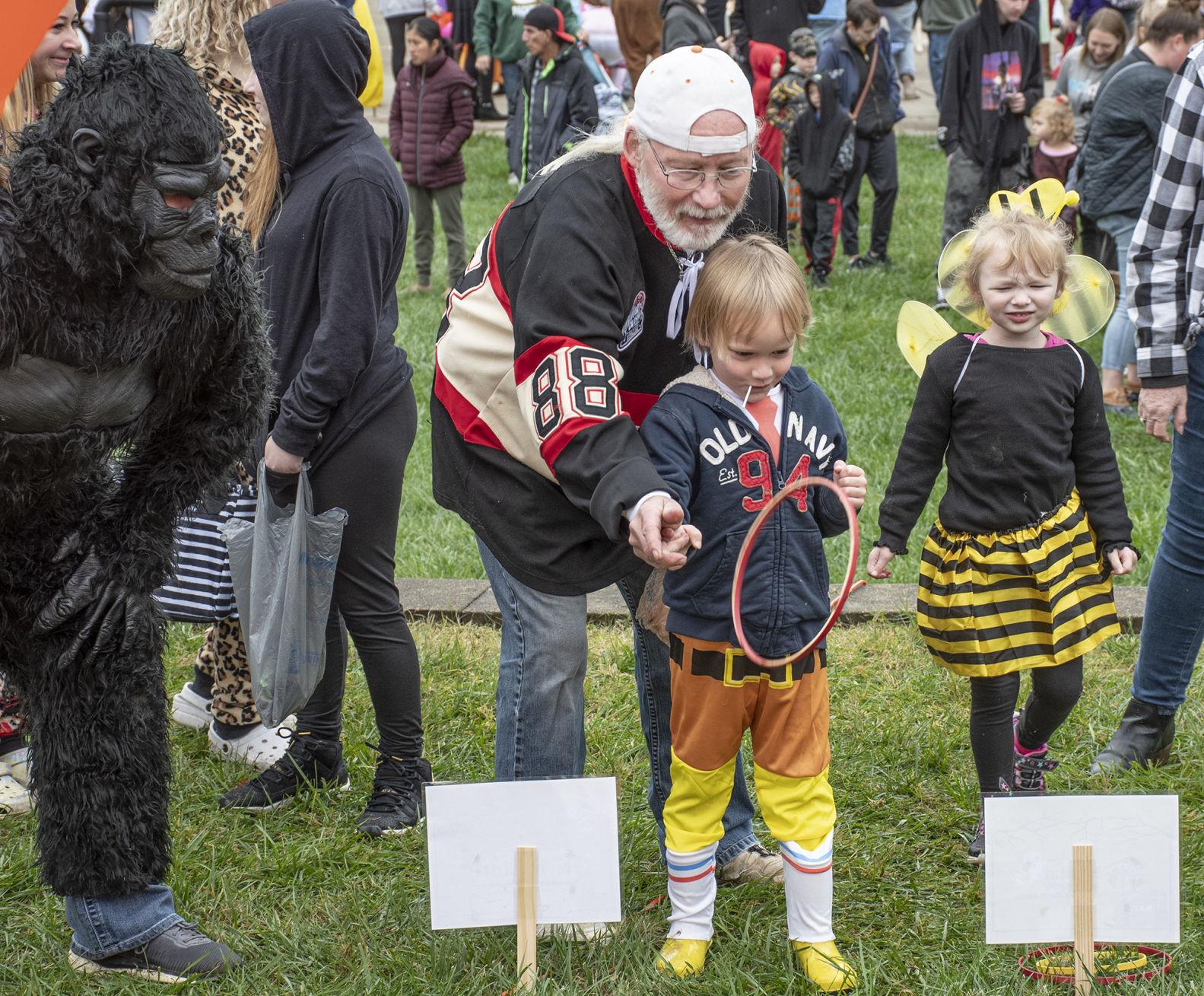 Right: A gorilla looks on (left) as Quinnten Stewart (center), of Madison, takes his shot — with a helping hand from Steve Stewart — at the ring toss game at the City of Madison’s Halloween Festival on Saturday at Bicentennial Park.

Gov. Eric Holcomb has extended COVID-19 executive orders through November but suggests they might be scaled back by December.

Holcomb added a provision allowing the health commissioner to authorize vaccinations in children under 11 when the federal government makes younger kids eligible — possibly as soon as midweek with vaccine already being shipped.

The orders also further extend an easing of certain licensing rules for people in the medical profession and remove a directive for hospitals to consider postponing non-emergency procedures.

More than 3.36 million Indiana residents are now fully vaccinated, according to the health department.

Anticipating a green light from vaccine advisers, the Biden administration is assembling and shipping millions of COVID-19 shots for children ages 5-11, the White House said Monday. The first could go into kids’ arms by midweek.

“We are not waiting on the operations and logistics,” said coronavirus coordinator Jeff Zients.

Historic Madison Inc. and the Jefferson County Historical Society were both awarded grants from Indiana Humanities Council from funds allocated to the American Rescue Plan.

“HMI deeply appreciates the support of the Indiana Humanities Council and the American Rescue Plan,” said John Staicer, president and executive director of Historic Madison Inc. “The grants will help HMI with its general operating expenses and allow us to create virtual tours of our award-winning historic sites and museum properties including: the Shrewsbury-Windle House National Historic Landmark, the Schroeder Saddletree Factory Museum, the former African Methodist Episcopal Church, the Francis Costigan House, the Jeremiah Sullivan House, and the Dr. Hutchings’ Office and Museum.”

Meanwhile, JCHS Executive Director John Nyberg said the grant will help through lean times due to months of being closed to the public.

“The Jefferson County Historical Society is so thankful for the support of the Indiana Humanities Council Grant. The funds will help to support JCHS’s general operating expenses during these financially lean times for our museum,” Nyberg said. “We have recently reopened our museum and look forward to again providing our in-person educational programing as we have for several years.”

HMI and JCHS are among 78 organizations across Indiana to receive funding from the Indiana Humanities Council. Over $800,000 was provided by the National Endowment for the Humanities (NEH) and distributed by Indiana Humanities with funds from the American Rescue Plan (ARP) Act of 2021.

“Humanities organizations are part of the critical infrastructure of this country and are providing essential services and programs to support communities recovering from the pandemic,” said Keira Amstutz, president and CEO of Indiana Humanities. “We are grateful to the U.S. Congress and the National Endowment for the Humanities for recognizing and providing this much-needed support, which will help essential community anchors and institutions strengthen their operations and enhance their programming.”

With colder temperatures on the way — perhaps as early as this week— a memorandum of understanding between the Salvation Army and the City of Madison was approved at Monday’s Board of Public Works and Safety meeting to operate a winter contingency/emergency shelter.

Daytime temperatures are expected in the 40s and 50s this week with nighttime forecasts for the 20s.

The Salvation Army warming shelter, 331 East Main Street, plans to be open when temperatures fall to 32 or below by 5 p.m. — contingent upon availability of trained certified staff and volunteers, — but Mayor Bob Courtney thinks that may not be enough.

Courtney said even at 32 degrees by 5 p.m. it can still be well below freezing by midnight. “If the weather is falling below that later, is there a way to look at that more prospectively?” he asked.

Lt. Stephanie Hartley said efforts are made to regularly check forecasts and the 32-degree standard is a good guideline when temperatures don’t plummet until late at night.

“They’ve buckled down somewhere” if they haven’t yet come to the Salvation Army, she said. “If it’s cold already, by midnight they’re set up and are not moving.”

She said for some homeless, it’s a matter of getting them to use the service. “There are some not big about sleeping in an open room with others on a cot,” she said. “They don’t want that situation unless it’s extreme weather.”

The shelter will be open 7:30 p.m. to 7 a.m. on nights that are cold enough. If open, Hartley said they will admit a person later as long as the dispatch calls before 10 p.m. and the person arrives with a police escort.

One of the biggest challenges the Salvation Army faces is having enough volunteers to run the shelter. There are two shifts — one 7 a.m. to midnight and the other midnight to 7 a.m. — and while 25 volunteers have been trained only half of those are available due to their full-time jobs.

She also noted the local facility is not designed to provide overnight shelter and uses the same space as other programs. There are no laundry facilities, but the Salvation Army is working toward adding showers. Architectural designs have been done and they are working with contractors but supply shortages have slowed the process.

Hartley said local churches have provided “a lot of support” financially for the shower facilities but “we really need volunteers so we’re not relying so much on the staff.”.

Hartley said estimating Madison’s homeless population is a “tricky question.” She said there are 10 to 12 on the street and five to 10 more in cars but there could be as many as 30 to 45 who have access to a structure, but no running water or electricity. Additionally, there are others who are “couch surfing” and “moving from home to home.”