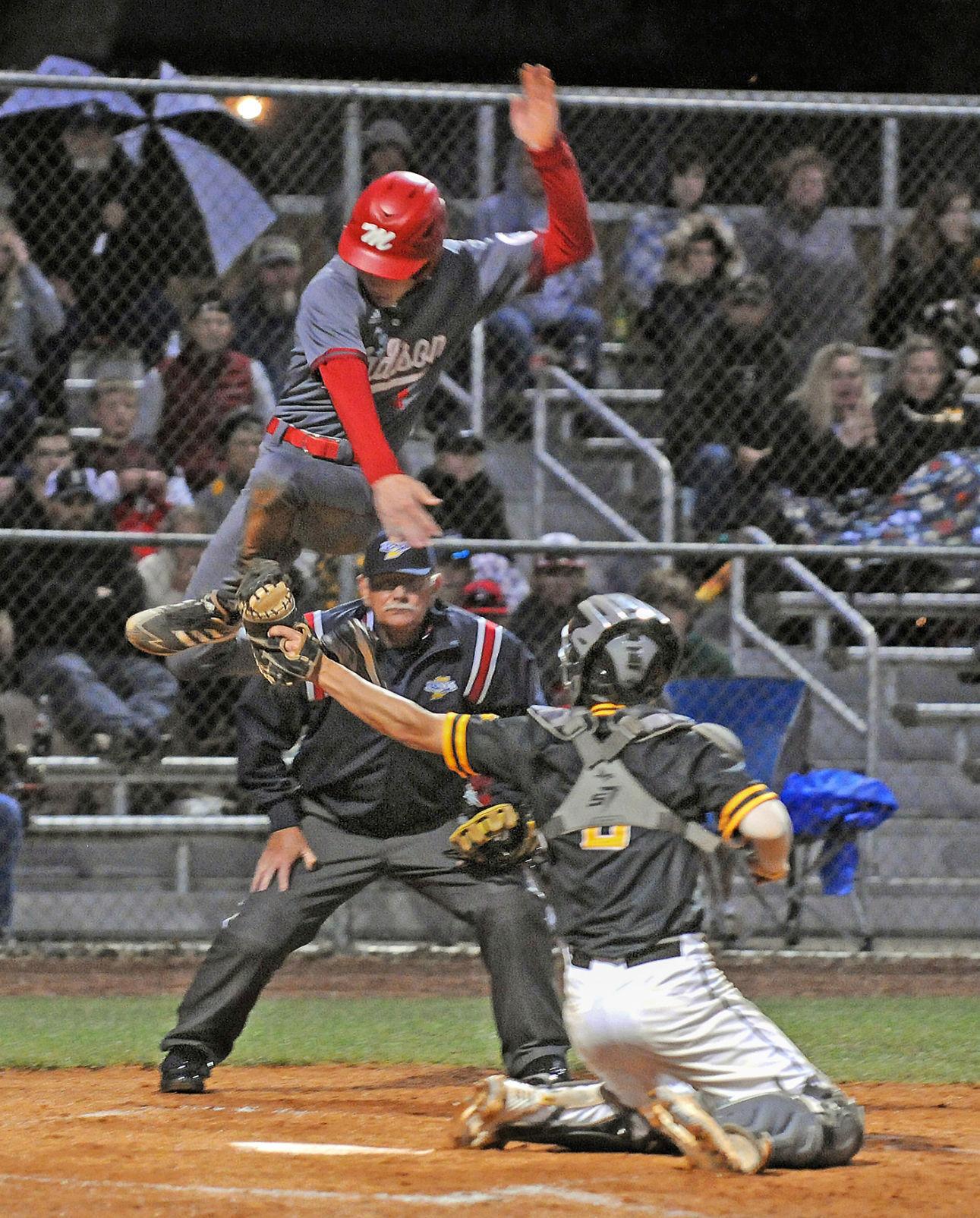 Madison’s Kaden Oliver leaps over the Salem catcher during the Cubs’ win in the Class 3A Sectional at Silver Creek on Friday.

The Milton-Madison bridge will undergo a routine annual inspection this week but no lane closures are expected and impact to traffic should be minimal.

The Kentucky Transportation Cabinet (KTC) announced the inspection of the US 421 Ohio River bridge last week to begin on Tuesday, June 1 and continue through Friday, June 4.

Inspectors from a consultant engineering firm will perform the assessment of the structure between 8 a.m. and 5 p.m. daily. However, inclement weather or other unforeseen delays could affect the dates and duration of the work, the KTC said.

The 40-foot-wide bridge, a continuous truss span constructed off site, delivered to Milton, Kentucky, and then assembled on site next to the former 20-foot-wide bridge at that location, opened in 2014 at a cost of $103 million. The former bridge, opened in 1929, was then demolished using explosives and the new span was slid into place on upgraded piers.

Unlike the old bridge, the design of the new span allows most inspection work to be conducted without impacting traffic through a series of service walkways under the deck of the bridge.

An estimated 3,500 vehicles use the Milton-Madison bridge daily as the only Ohio River crossing between Markland Dam near Vevay upstream and the Lewis and Clark bridge connecting Louisville, near Prospect, Kentucky, to southern Indiana, near Utica, Indiana, downstream. 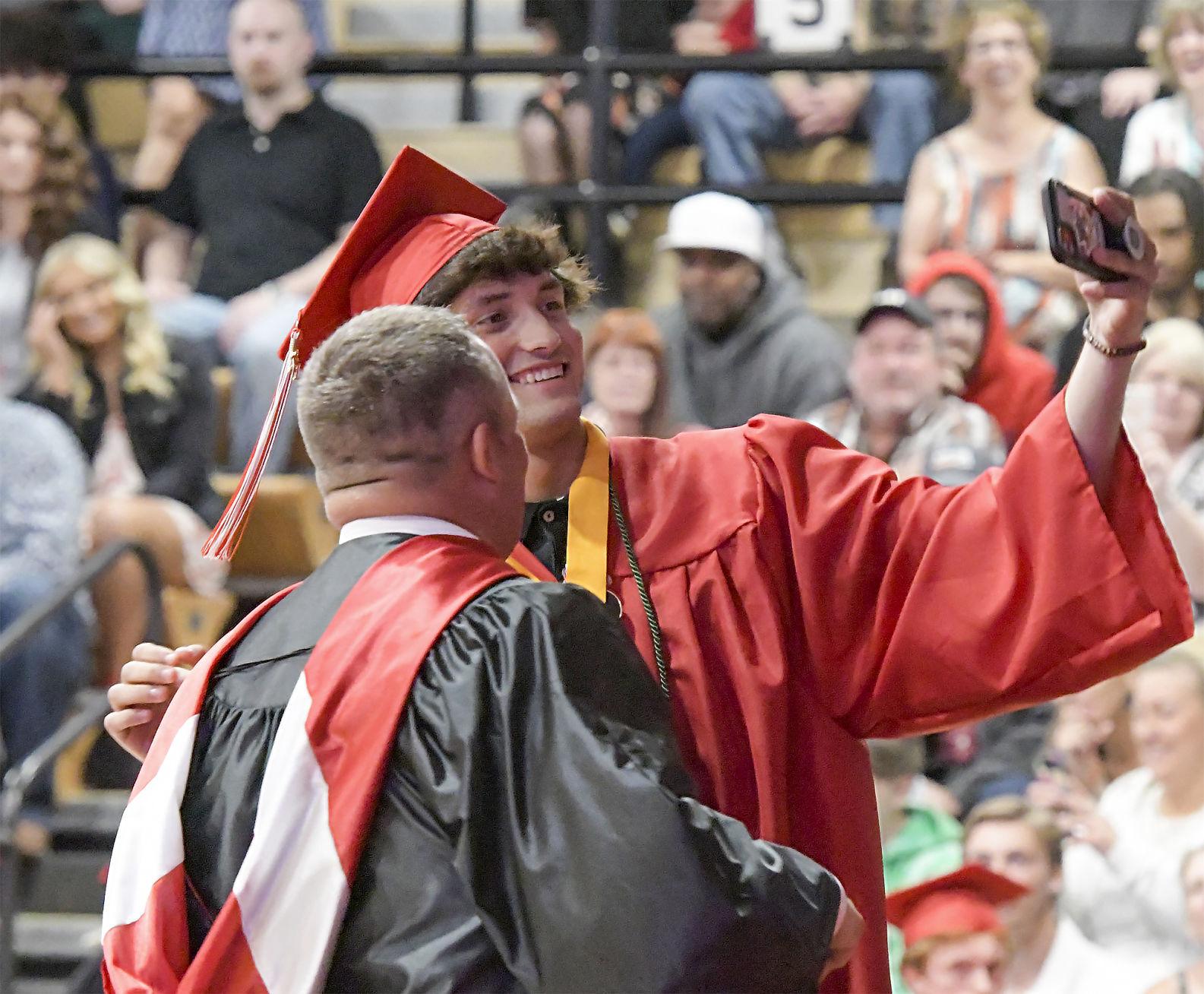 Above left: Madison’s Nick Center stops to snap a selfie with Principal Michael Gasaway while picking up his diploma at the Madison Consolidated High School graduation at Salm Gym on Sunday. Above right: Abigail Fulton gives the Class Address at Southwestern High School.

Madison’s Sunrise Golf Course will begin a major transition this week with the departure of longtime PGA professional Jeff Bridgford and the changes that will be coming to the pro shop and grill prior to when Madison names its next golf pro later this summer.

Bridgford and the city reached a mutually acceptable separation agreement last month that will see him step down after 26 years at Sunrise and the city hire a new golf pro in a process that will also involve renovating the clubhouse and adding services like alcohol sales and pursuing additional events at the 18-hole municipal.

“Our goal is to create a marketing presence that will encourage more play,” Mayor Bob Courtney said Sunday. “We will do so by coordinating with area hospitality and tourism partners, develop corporate relationships, expand memberships, and create a sense of destination development with the course.”

Courtney noted that by the city having “complete control over its golf course” for the first time in decades — previous golf pro Bob Rusk has a similar tenure — the city plans to make several changes that include refreshing the clubhouse, reopening the grill, hiring a new PGA golf professional, offering new services like alcohol sales, event opportunities and promoting the course across the region.

“The changes planned by the city along with a better focus on operations is intended to cultivate new players and reduce operating deficits that have brought decline to the entire park system,” he said.

As part of that change, the golf course grill will close this week for remodeling but the pro shop and course will remain open. Tee times also can be reserved through the city’s website at www.madison-in.gov.

“Our hope is to get this done as quickly as possible because we have several events coming up,” Courtney said. “We hope to have the grill reopened and the new pro hired within two weeks.”

Sunrise Golf Course has operated at more than a $300,000 deficit in recent years due in large part to a fee structure set by the city that did not cover expenses despite 26,000 rounds played at the course in 2020 and by employing year-around maintenance staffing for what Courtney described as seasonal work. Last month the city increased fees, made adjustments in staffing and approved alcohol sales at the course with hopes that the Sunrise can break even or make a profit and free up more tax dollars for improvements to other parks in the city.

“We have already restructured how the course operates and identified new revenue sources that will create a long-term sustainable operation that will eliminate taxpayer dependency,” Courtney said. “This will allow us to invest in all our parks more effectively. Change is never easy so we ask for the community’s support as we implement these new strategies.”