The City of Madison on Friday asked Jefferson County Commissioners to contribute $2.5 million to the city’s proposed drinking water infrastructure improvement project and a comprehensive plan for mitigation of flash flooding.

The city is seeking the funding from the county’s share of American Rescue Act funds with $150,000 going toward the storm water mitigation study and the remainder toward long overdue improvements to the drinking water system that serves Madison and a good portion of the county that buys its water from the city.

The comprehensive storm water plan would be conducted by the Army Corps of Engineers to evaluate causes of flooding and develop strategies to create future storm-water infrastructure to mitigate disasters such as what occurred June 18 in downtown Madison and other areas of the city and county at an expected cost of $425,000.

The drinking water infrastructure improvement project would include tank improvements and replacement of miles of new water lines at an estimated cost of approximately $15 million to complete.

No decisions were made by the County Commissioners on Friday but they generally supported the proposals.

The city is also seeking funding for the drinking water project through the Indiana Finance Authority (IFA) in the form of a State Water Infrastructure Fund (SWIF) grant in the amount of $5 million and would like the county to commit funds to help strengthen that application.

“We’re a small piece of that,” Bellucci said, adding that the scoring criteria favors projects with local match money and regionalization which he said the city’s SWIF application should score well on since the city supplies water to nearly two-thirds of Jefferson County including customers in Madison as well as the Dupont, Canaan and Rykers’ Ridge water companies. He said there is also a strong need since the city’s six storage facilities need significant upgrades as well as the sewer treatment facilities.

“If we can let the state know that we have the county’s backing and support in this effort, it will go a long way in our scoring to get additional grant money as well,” Bellucci added.

He said the project involves a 20-year plan to not only address current needs but issues that might arise in the future.

“It’s exciting for sure,” Bellucci said. “No one likes to jump into a large infrastructure project like this, but you don’t have a choice.”

Madison Deputy Mayor Mindy McGee said if the grant application is rejected, the city will have to look at alternative ways to fund the project and that could mean passing more of the costs to customers in the form of higher water rates for residents of the city and county who use Madison water.

“It’s something we have to do,” she said, noting they are working to “do everything we can do to mitigate debt.”

Bellucci agreed, “The more grant money we can get, the less the burden on everybody, not just the city, but the county people who rely on the city’s water utility.”

Commissioner Bobby Little said he’s aware that the project needs to be done. “I’m on Rykers’ Ridge water, and we still have the old cast pipe in the ground. We need to look at doing ours, too, later on down the road.”

Brian Jackson, Utility Manager for the City of Madison, said that in addition to providing water for Dupont, Canaan and Rykers’ Ridge, the city has a reciprocal agreement with Kent Water Company. “When they need water, we give it to them, and when we need water, they give it to us. Just last week, they had an electrical outage and we gave water to Kent. We pretty much help the whole county if they need it.”

Jackson said the more Madison receives in grant money, the better the city will be able to keep water rates down for all residents of the county and having local support now could save users money later. He said if Madison receives no grant money for the drinking water infrastructure plan that the basic rate for Rykers’ Ridge will increase $52,000 per year, $100,000 for Canaan and $74,000 for Dupont which then would have to be passed on to customers.

“We do feel this truly is a county-wide issue and project,” McGee said, adding the city is part of the county.

County Surveyor Mike Pittman noted the county is seeing substantial growth. “We have an additional half-million to a million dollars building in residential. There is a definite need for people.”

Commissioners President David Bramer said the county would support the water project but needed time to evaluate and consider what that support would involve.

With the grant application pending, McGee and Bellucci both pressed on when that decision would be made.

Bramer indicated the county would announce its decision at an upcoming meeting and did not rule out a special meeting.

McGee also pointed out that the June 18 flash flooding not only impacted the North Walnut residents but it also resulted in flooding on “Wilson Avenue and homes on the hilltop.”

Little agreed, adding that it impacted county residents off of Crooked Creek and U.S. 421, along with county highways in which Crooked Creek runs alongside.

• Heard a report from Bramer that the county is participating with Our Southern Indiana Regional Development Authority in developing regional projects to compete for part of the $500 million Regional Economic Acceleration and Development Initiative (READI) in which up to $50 million could be awarded to a region. Among the efforts are the possible development of an airport at the former Jefferson Proving Ground that might be used as a hub for air freight, infrastructure improvements in the southwest portion of Jefferson County connecting with the northeast area of Clark County and the southeast part of Scott County, and a collaboration with city on the Ohio Theatre.

Steve Meyer, who represents Scott County on OurSIRDA, said the region has received 52 applications for projects totaling $200 million, and the board is in the process of reviewing them. Meyer noted that projects that may not fit into the region’s plan through the READI process could still move forward. “Some of the things that are not accepted will be channeled to other state agencies,” Meyer said.

• County Assessor Karen Mannix submitted bids for the four-year cyclical reassessment contract with Tyler Technologies being awarded the contract at $585,532. “There was just more to offer in the Tyler bid,” said Mannix, particularly in hours toward any appeals that might be made. The other bid was offered Lexur Appraisal Services at $584,600.

• Awarded a bid on the full-depth restoration of Interstate Block Road and County Road 450W to Specialties Company of Indianapolis for $279,522.50.

• Heard a request from Erin Thomas of LifeTime Resources for $20,000 funding in 2022. Thomas said the organization works to provide services that help people maintain their independence. Thomas said LifeTime’s services to Jefferson County are valued at $1.2 million, and noted what the county contributes provides a match for other resources that the organization receives. Thomas noted the request for $20,000 is a significant jump from the $8,000 that the county awarded LifeTime for 2021, but noted there is a past history of greater amounts that were awarded and requested. 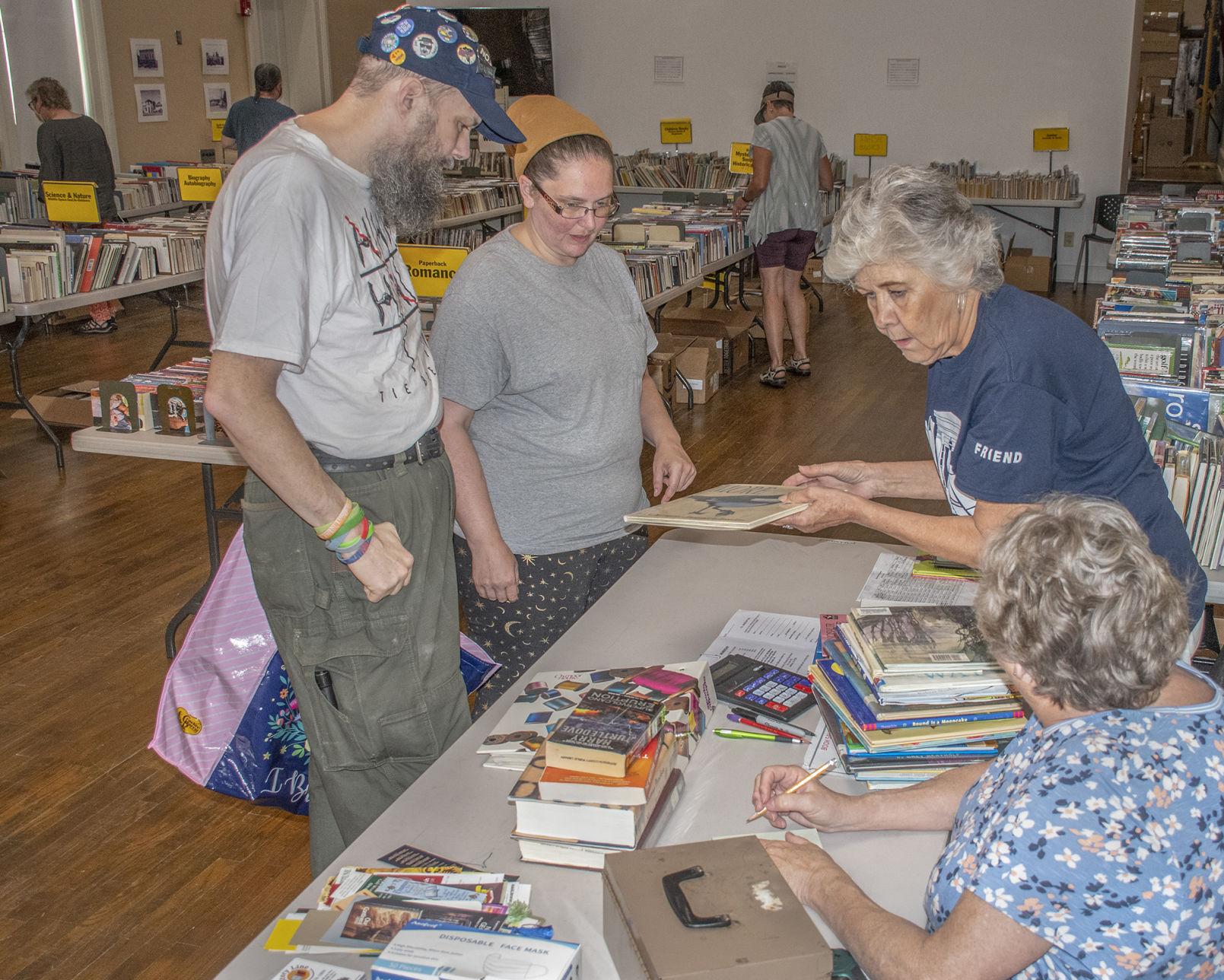 Left: Walter and Ellen Long, of Madison, wait to pay for their selections as Cheryll Judge (right) and Robin Cull work the check-out table at the Madison-Jefferson County Library’s COVID-19-delayed Spring Book

Sale while other shoppers search through the tables of titles. The sale, which made about $2,400 for the library’s programs, was hosted by the Friends of the Library last weekend. Another sale, the Fall Book Sale, will be held in September.

Indiana Conservation Officers are investigating the death of a Bennington, Indiana, man Saturday after he went under water while swimming in a private pond and never resurfaced.

The body of Weston Ellis, 39, of Mexico Ridge Bennington, was recovered in approximately 10 feet of water early Sunday morning from a pond located at 3333 Bells Branch Road in Ohio County.

Authorities were dispatched to the scene at approximately 7:53 p.m. Saturday after Ellis had gone missing.

The incident is still under investigation and an exact cause of death is pending autopsy results.

Funeral arrangements for Ellis will be announced by the Morgan & Nay Funeral Centres of Madison and Hanover.

With a contract finally agreed upon between the Jefferson County Board of Tourism, Visit Madison Inc. has its operations funded through the end of March of 2022.

At Monday morning’s VMI meeting, the board turned its attention to marketing funding, which still must be determined by JCBT, which is requiring a strategic plan from VMI.

Board members encouraged Sarah Prasil, VMI’s executive marketing director, to focus on the strategic aspects of the plan that will guide the spending rather than delve too deeply into the specific ways money will be spent.

“Even when you have a plan, it always changes,” said board member Hannah Fagen, noting that changing circumstances impact how every strategic plan is executed.

Prasil said not having the marketing fund issue settled has put the agency “way behind” with the county’s marketing due to the lack of funding. She said for now she is continuing to plan ahead as best she can.

VMI’s staff currently includes Prasil and Tiffini Poling, the office manager. Additionally, Erin Kindle is working as coordinator of Ribberfest. With operations funding now in place, interviews are being conducted to fill staff vacancies and VMI board president Lucy Dattilo is hopeful that the new staff will be on board in the next week.

• Heard an update from Kara Hinze on the Madison Chautauqua Festival of Art. She said 94 artists have confirmed attendance with 70 more still needing to respond for the event scheduled for Sept. 25-26. If all respond, a total of 164 artists will be confirmed for the event, which Hinze said is short of the target number of 200.

According to Hinze, COVID-19 is a factor in the decreased number. “There are spring festivals that were delayed to the fall” that Hinze said are in conflict with the Chautauqua, while others are apprehensive because of the recent increase in COVID-19 cases. “Hopefully, next year will be better,” she said, adding that one benefit of having fewer artists is “we might be able to spread them out more because of COVID.”

Hinze also reminded that with this being the 50th anniversary Chautauqua that they are discussing adding music to the weekend that would take place from 6 p.m. to 8 p.m. after the Chautauqua booths close for the day at 5 p.m.

• Voted to update the VMI bylaws to include an ex-officio member from JCBT that both VMI and JCBT will mutually agree upon. In the contract that was approved by JCBT and VMI, there was a provision that a JCBT board member serve in an ex-officio capacity on the VMI board.

• Heard a report by Kindle on the Madison Ribberfest BBQ and Blues Festival on Aug. 20-21. Regular meetings have been held for planning with weekly meetings schedule from now until the event. Much of the preparation work is done, but Kindle said she is finalizing golf carts, sponsorships, and other details.