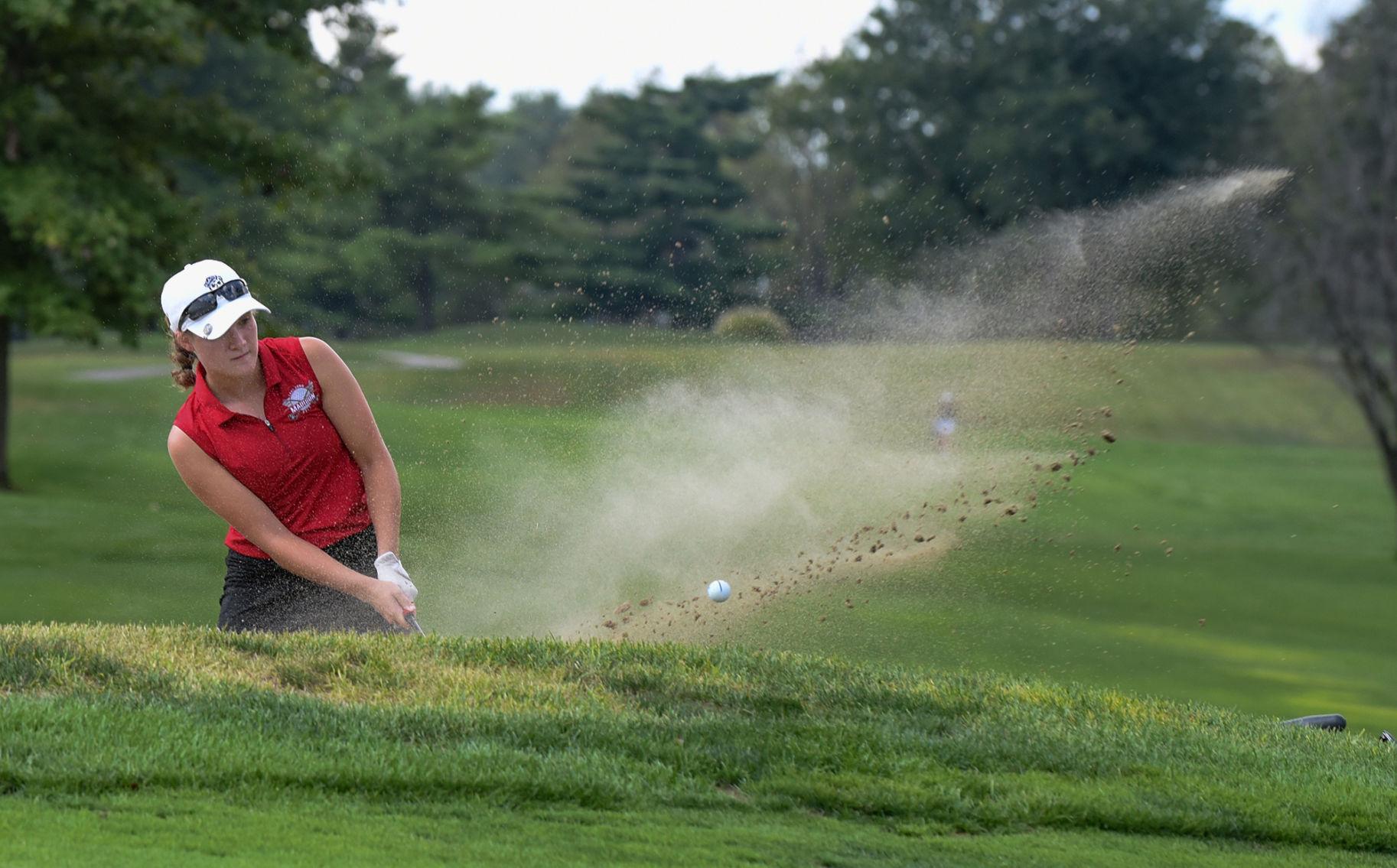 Eder finds the family she is seeking at Marian

School officials and students were recognized at a special program on Wednesday after Deputy Elementary was named a National Blue Ribbon School for 2021 by the U.S. Department of Education — the first school in the Madison Consolidated Schools district to receive the award in its 29-year history.

No matter the rain on Wednesday, it couldn’t have been a more beautiful day for Madison Superintendent Jeffrey Studebaker with Deputy Elementary School being honored as a 2021 National Blue Ribbon School.

While visiting the school Studebaker noted it is the first time any school in the Madison Consolidated Schools district has received the award, which was created nationally in 1982.

“To be recognized with this award is an incredible honor. This is the highest achievement a school can receive,” he said.

“Our teachers work each day to meet students where they are, emotionally, academically, socially and physically,” said Deputy School Principal Janet McCreary. “They look at the whole student.”

McCreary noted Deputy Elementary is strengthened in that its teachers and staff are committed to the school. “Our newest teacher was hired five years ago,” McCreary said, adding that most have been there 12 to 15 years. McCreary, herself a student at Deputy Elementary, returned after college to teach there before being named principal seven years ago.

“It is truly a family atmosphere,” she said of Deputy. “Everything we accomplish at Deputy Elementary is done together. Teachers and staff work together to teach and support students, their families and each other.”

In addition to the teachers and staff, Studebaker credited “how the kids and parents have worked. The parents love this school and support what we’re trying to do. This school is a gem.”

Deputy Elementary was recognized as an Exemplary Achievement Gap-Closing School for its work with students to close the achievement gap.

Academic gap-closing occurs when students, within a specific cohort, are identified as low or lower performing based on academic data points year after year. “Data drives our instruction, but the teachers and staff hearts provide the environment in which true learning can take place,” McCreary said. “Students feel safe and loved by adults in our building.”

In order to be considered for the National Blue Ribbon School award, a school must be nominated by the state department of education.

Studebaker noted that part comes by filtering academic data through the Indiana Department of Education. “The data is reviewed year after year and can be attributed to a specific cohort of students. That continual improvement of academic performance made Deputy stand out among the nation’s schools,” he said. “This is a truly remarkable achievement and the fact that it is based upon student academic achievement and growth make it that much more incredibly special.”

Deputy Elementary received the nomination from the federal department of education on Feb. 5 to begin the application process.

“This year’s cohort of honorees demonstrates what is possible when committed educators and school leaders create vibrant, welcoming and affirming school cultures where rich teaching and learning can flourish,” said U.S. Secretary of Education Miguel Cardona. “I commend this school and all our Blue Ribbon honorees for working to keep students healthy and safe while meeting their academic, social, emotional and mental needs. In the face of unprecedented circumstances, you found creative ways to engage, care for and teach our children.”

Up to 420 schools can be nominated and this year 325 schools — seven in Indiana — received the National Blue Ribbon School designation out of the approximately 131,000 throughout the nation.

“This is a huge honor,” Studebaker said. “The teachers and everybody who works in the building has helped us achieve this. Students and parents worked hard for us to get here, and I want to thank all of them ... Deputy is a shining star and an example.”

Drive Chair Susie Hamner (right) and other volunteers assemble meals for the Jefferson County United Way 2022 Campaign Kick Off Cookout on Thursday at Bicentennial Park. The nonprofit hopes to raise $322,000 through its various fundraisers and pledge programs to support programs and agencies in 2022.

The United Way of Jefferson County kicked off its 2022 fundraising campaign with a luncheon and raffle at Bicentennial Park on Thursday but the burgers and hot dogs served up on a chilly fall day were more message than money maker.

The message being that United Way’s annual fundraising campaign is underway and the dollars contributed over the next few months will help sustain a number of agencies serving the community throughout 2022.

“We’d normally have a banquet today, but because of COVID we’ve decided to have another kickoff cookout like we did last year because were weren’t sure what was going to happen with COVID and trying to be safe,” Susie Hamner, drive chair for the fundraising campaign said while she and others prepared dozens of meals of burgers, hot dogs, chips and drinks for pickup and delivery.

Providing a $5 lunch and an opportunity to win a long list of raffle prizes was more goodwill than money maker — especially for an organization hoping to raise $322,000 in 2022.

According to United Way Executive Director Sheila Coffin, the $322,000 goal is less than the $350,000 sought in 2021 when the impact of COVID was felt by the United Way and across the community. However, it’s a goal that should keep programs going in what looks to be a second year of the COVID-19 pandemic.

The local United Way drive came up thousands short last year because several of its key funding mechanisms were disrupted by the virus shutdown. With companies and businesses closed for part of 2021, the payroll deduction options that allow workers to donate a percentage or their earnings to United Way were not collecting.

“When you have an employee who is not working and receiving a paycheck, the payroll contributions are not coming in to us,” Coffin noted. Other fundraisers, too, like restaurants and businesses scheduling events where a portion of profits are donated to United Way also took a hit.

That’s when, amid all the uncertainty of the pandemic, came a huge lifesaver for United Way and the agencies it serves. Lilly Foundation, the tax-exempt private foundation that supports philanthropic initiatives to improve health and strengthen communities in Indiana, rescued the United Way statewide including a pair of grants — first $250,000 and later $129,000 — in Jefferson County.

“It was a lifesaver,” said Coffin. “It helped us get through the year and keep funding the agencies we serve.”

United Way’s reach varies from year to year based on which groups apply for and receive money but the list involves agencies that impact local residents from the cradle to the grave and even extends into surrounding counties on both sides of the Ohio River.

“We partner with other agencies and we help them,” Hamner said. “We all are vested in our community and we live here and what we’re trying to do is just make everyone in our community have an opportunity to live the best life that they can ... We’re just trying to raise funds and help wherever we can in the communities so everybody can live united.”

The United Way drive is scheduled to end on Jan. 31, 2022. For more information, visit www. jcinunitedway.com.

A Jefferson County man was sentenced earlier this month to 15 years — 12 of that in prison plus three years supervised probation — after entering a guilty plea for dealing methamphetamine.

Walker was arrested on Jan. 19 following a tip from a local hotel after the cleaning staff noticed narcotics, methamphetamine and drug paraphernalia in a room rented by Walker. Security camera footage from the hotel showed several people entering and leaving Walker’s room during his stay.

Walker, who entered a guilty plea in Jefferson Circuit Court on July 28, was sentenced on Sept. 10 to 15 years in the Indiana Department of Correction with credit for 234 days jail served. The sentence was later amended on Sept. 14 to suspend three of those years for supervised probation by the Jefferson County Community Corrections Department so with credit for time already served Walker will serve a little over 11 years behind bars before being released for probation.

The agreement also calls for Walker to be given a risk assessment to determine appropriate programming for his probationary period. He must participate in and pay for all programming and counseling deemed appropriate.

“I am pleased to see this drug dealer off the streets and behind bars,” said Jefferson County Prosecutor David R. Sutter. “I commend our police department for their work in this case, particularly Detective CJ Miller with the Jefferson County Sheriff’s Office and officers with the City of Madison and Town of Hanover Police Departments.”

News
JCHD has Pfizer vaccine for those eligible for booster

The Jefferson County Health Department confirmed Friday that it has Pfizer COVID-19 vaccine available for those now eligible for booster shots.

On Thursday, the Centers of Disease Control and Prevention (CDC) recommended the administration of a booster dose of the Pfizer vaccine to counter waning immunity in specific populations following a Food and Drug Administration’s decision to expand its Emergency Use Authorization to include the boosters.

According to the CDC, the booster should be administered to individuals age 65 and older, residents of long-term care facilities, and individuals age 50 to 64 with underlying medical conditions that put them at high risk of severe COVID-19.

Additionally, the booster may be received based on individual benefits and risks by individuals 18 to 49 with underlying medical conditions and individuals 18 to 64 who are at high risk of COVID-19 exposure and transmission because of an occupational or institutional risk.

Eligible Hoosiers who want to obtain a booster dose can go to www.ourshot.in.gov and search for a site that offers the Pfizer vaccine, which is designated PVAX, or call 211 for assistance. Hoosiers are encouraged to bring their vaccination card to their appointment to ensure the booster dose is added.

Meanwhile, in the last two days there have been 46 new positive cases of COVID-19 in Jefferson County while Carroll County has recorded 26, Switzerland County 11 and Trimble County six.

As of Friday afternoon, 52.6% of Jefferson County’s eligible residents have been vaccinated.

The Indiana Department of Health will be hosting a drive-through COVID testing site and COVID vaccination site from noon until 8 p.m. today at the King’s Daughters’ Hospital main campus parking lot, 1373 East State Road 62, in Madison. The drive-through site will offer both Pfizer and Johnson & Johnson vaccines.