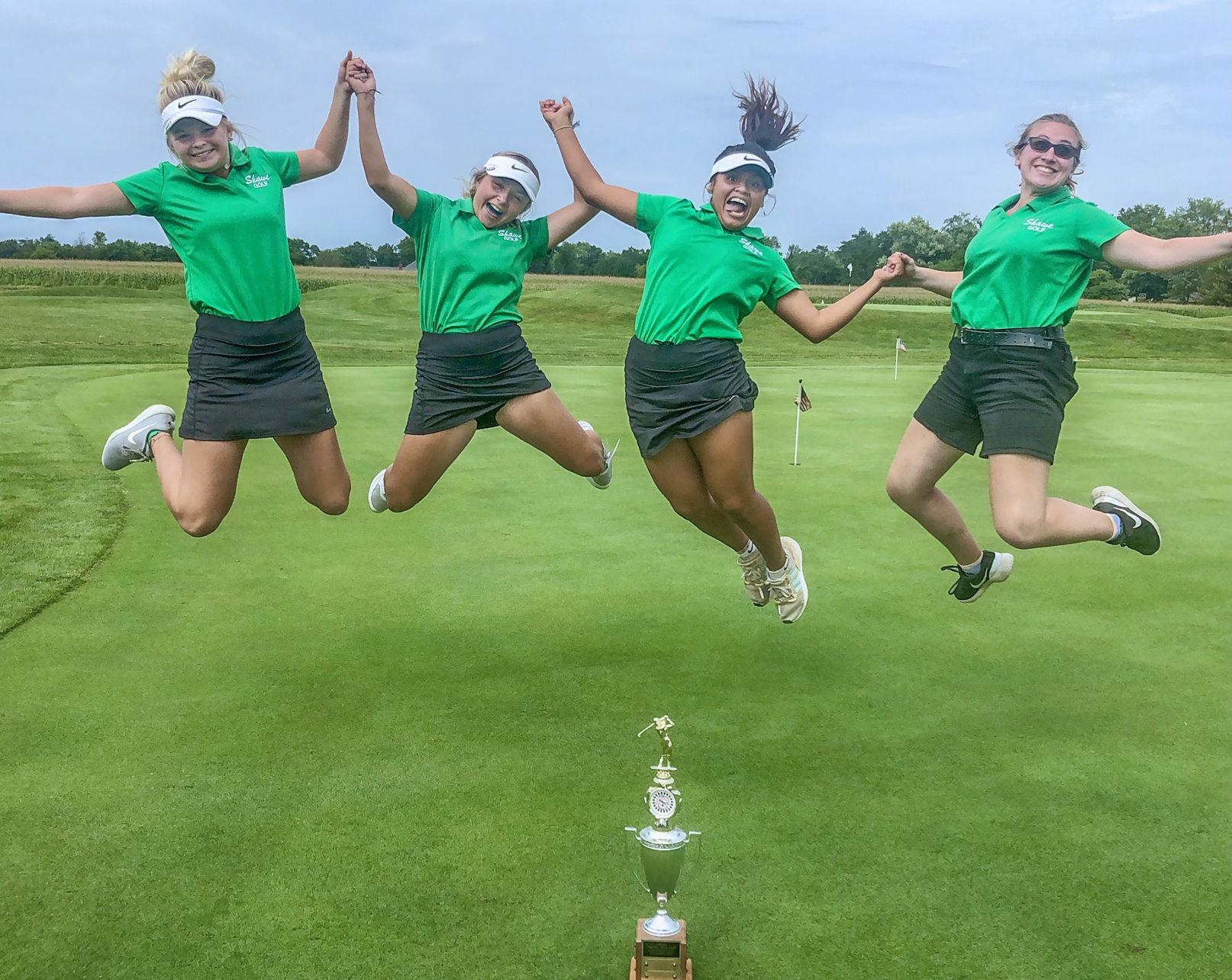 Washington Fire Company No. 2’s Hose Reel Wagon is shown in front of the firehouse in the late 1880s.

The Washington Fire Company No. 2 building is shown today.

Firefighters from Washington Fire Company No. 2 preparing for the 1904 Fourth of July parade with their horse drawn 1899 Ahrens-Fox Metro Pumper and Hose Reel

Members of the Washington Fire Company No. 2 are shown with their 1916 Ahrens-Fox Pumper — the company’s first motorized pumper.

An vintage alarm box at Washington Fire Company No. 2.

The Washington Fire Company No. 2 has existed in Madison for 175 years — a long tradition of commitment to public service —with the motto of “For the Public Good, We Hazard Our All.”

The fire station, located at 104 West Third Street, is the first and only home of the No. 2 Fire Company, making it the oldest active fire station in Indiana.

The Washington No. 2 Fire Company, established Jan. 22, 1846, is celebrating that 175th anniversary this coming weekend along with recognition during a special ceremony on 20th anniversary of 9/11 Saturday and an open house at the firehouse on Sunday. The fire station, completed in 1850, is one of the last remaining Greek Revival firehouses in the United States still in use.

No. 2 Fire Company was organized by members of the Fairplay No. 1 Fire Company, which was established in 1841 and is the oldest volunteer fire company in Indiana. Even though Fairplay Fire Company is older than Washington Fire Company, it wasn’t until 1888 Fairplay moved into its current firehouse, which was originally a horse-drawn streetcar barn when built in 1875.

However, Quiros listed at least three fire companies that are older, but with fire stations that came after 1850. Relief Fire Engine Company No. 1 in Mount Holly, New Jersey, founded in 1752, is the oldest volunteer fire department in the nation, but it has an 1892 building. Darby Fire Company No. 1 in Darby, Pennsylvania, was founded in 1775, but it has a firehouse from 1912 with additions in 1960 and 2014. Haddon Fire Company in Haddonfield, New Jersey, dates back to 1764, but the current firehouse was constructed in 1952.

“I don’t know if any currently active stations predate 1850,” said Quiros, adding to the speculation that Washington No. 2 Fire Company’s station could be the oldest in the US.

In 1972, Frank Bird, well-known as a Jefferson County historian for many years until his death in 1987, was a member of the Washington Fire Company and researched its history. He wrote then that “no mention has ever been found why the fire company was called Washington.”

But with Washington as the last name of George Washington, the first United States president, there is distinction to the name that might go with No. 2 Fire Company’s membership. “Being situated near the center of town of Old Madison and ’neath the hill, the records show it was the largest and most affluent of the four companies (that existed at the time),” Bird wrote.

Bird stated that the fire company had 90 members in 1886, and until the turn of century a roster of 70 to 80 firefighters. “About a fourth of that figure were bankers, merchants and factory and shop owners,” along with members that were part of the city administration including Issac Wagner, a blacksmith and grandson of the first man to build a cabin in Madison, who was a charter member of the fire company, and served as mayor from May 1892 to January 1894. In all, Washington No. 2 Fire Company has had four Madison Mayors among its membership — the others being Edward Eckert (1922-1926), William Eckert (1948-1952) and Markt L. Lytle (1984-1987).

The fire company’s affluence in the early years is evidenced on the second floor of the fire house that was used as used as a ballroom in which Bird wrote was one of the society spots of Madison. The ballroom was elegantly adorned wit two elaborate gas-burning glass crystal chandeliers from Austria, and the floor covered with Brussel carpeting. In 1925, the chandeliers were donated to the Lanier Mansion to the help the adornment of two parlors, along with some of the carpeting.

The chandeliers have since been returned, according to John Muessel, secretary-treasurer of Washington No. 2 Fire Company. He said during a renovation of the Lanier Mansion, the chandeliers were put into storage because they weren’t consistent with the era of the rest of the mansion. Because they were in storage, the fire company asked to have them returned, but the state required they be given to an historical entity, so they were given to Historic Madison Inc., which Mussell said rents them to the No. 2 Fire Company for $1 per year. For years, Muessel said there were rectangular pieces in the ceiling that seemingly made no sense with the chandeliers gone but now look as they should with the chandeliers back in place.

When the carpet was taken out in the mid-1920s, Muessel said it was replaced with red and white linoleum that was there for many years. However, a more recent renovation of the upstairs refinished the hardwood floor. Today, the upstairs is used for meetings and part of what was once ballroom has been converted into a kitchen area.

In more recent years, membership has declined to the current 16 members. James Edwards, a member since Oct. 4, 1977, said Washington Fire Company is “needing for membership,” an issue that all city fire departments are currently experiencing.

“A lot of the young won’t come and do it,” he said, noting there’s more required to becoming a firefighter now than in the past. “You have to commit to training to satisfy the laws that have been passed.”

In the past, membership carried through generations, and that remains the case today. Edwards said his father, James Sr. served Washington Fire Department No. 2 before him. And James Edwards’ first cousin, Bill Combs, president of the fire company, has been joined by his son, B.J. Combs, the captain. Likewise, Steve Manaugh, vice president, followed his father, Jack Manaugh, and now Steve’s son, Tyler, is serving on the fire department.

Muessel joined Washington No. 2 in February of 1975, and has been a member 46 years. He was working at Madison Bank and Trust Company when Tony Hertz felt he should join and “the rest is history,” said Muessel. While no one in his family at the time was involved in local firefighting, he learned later that he had ancestors who had been firefighters, but at other fire companies in the city.

Firefighting has changed greatly in the 175 years Washington No. 2 Fire Company has existed. In the early years, firefighters relied on horse-drawn hose wagons and steamers. Originally, the back part of the first floor in the firehouse was a stable for the horses. In 1860, the fire company received a new horse-drawn steam pumper, the first of its kind in the Midwest even while fire departments in Cincinnati, Louisville and Indianapolis were still using hand pumpers.

In 1916, the fire company purchased a mechanized truck manufactured by Ahrens Fox and made in Cincinnati. The process of getting the truck almost led to a merger of fire companies. Bird wrote that City Council offered $4,000 per year if arrangements could be made to merge with No. 3 Western Fire Company. With 22 members of the No. 2 Fire Company present, 19 voted against merger with three abstaining. The fire company purchased the Ahrens Fox truck at an estimated cost of just less than $10,000 after borrowing $8,000 from Madison Insurance Company.

The change in firefighting technology led to alterations in the fire station’s facade that at one time had an arch-shaped equipment bay door balanced with two arched shaped entrance doors on each side. Now, there’s just one entrance door that’s on the west side with a larger equipment bay door eliminating the entrance door on the east side in order the accommodate the greater width now required by today’s fire trucks. The doors are squared up with no arches, although in observing the front of the building, one can still see partial remnants in the bricks of where the arched doors once existed.

Steve Manaugh said serving on the fire department is about “community service and giving back.”

Edwards agreed, “It’s like a lot of little towns” where volunteer firefighting is essential in protecting the community. “It’s important that this be done.”

Positive cases of COVID-19 are stressing hospital staffs throughout Indiana and Kentucky with 2,443 hospitalizations from the virus in Indiana and 2,365 in Kentucky.

Late last week, King’s Daughters’ Hospital in Madison was reporting its highest volume of COVID-related admissions since the pandemic began with the overwhelming majority of those patients unvaccinated.

The biggest increase in COVID-19 cases in the area has been in Carroll County where the Kentucky Department of Public Health has reported 73 new positive cases of COVID-19 so far this month with 22 on Friday, 21 on Thursday and 30 on Wednesday. Trimble County has had 38 positive cases in September.

“We are pursuing every opportunity to increase our capacity to respond to this deadly surge and to assist our health care facilities and staff, which are strained caring for our fellow Kentuckians with record hospitalizations and critically ill patients,” Beshear said. “Thank you to our health care heroes and National Guard teams who continue to serve on the front lines, and thank you to the federal government for their continued assistance during this dangerous time in the pandemic.”

Jefferson County Health Department is accepting walk-ins at its office for COVID-19 vaccinations at its office at 715 Green Road, Monday through Friday, 9 a.m.-3 p.m. Three vaccines, Pfizer, Moderna and Johnson & Johnson are available. Individuals ages 12-17 must receive Pfizer vaccine and have an adult present.

All Kentuckians can sign up for a COVID-19 vaccination appointment near where they live or work at vaccine.ky.gov.

A special ceremony commemorating the 20th anniversary of the 9/11 attacks in the US will be held at 10:30 a.m. on Saturday at Bicentennial Park, along with a recognition of nearby Washington Fire Company No. 2 for 175 years of service.

Guest speakers will share remarks, along with all Jefferson County fire, police and emergency medical service being recognized for their years of service. Madison Mayor Bob Courtney will provide special recognition for Washington Fire Company No. 2 for its milestone anniversary.

After the ceremony, there will be activities related to public safety day for police, fire and EMS, along with games for children, bouncy houses, giveaways, and free hot dogs and burgers.