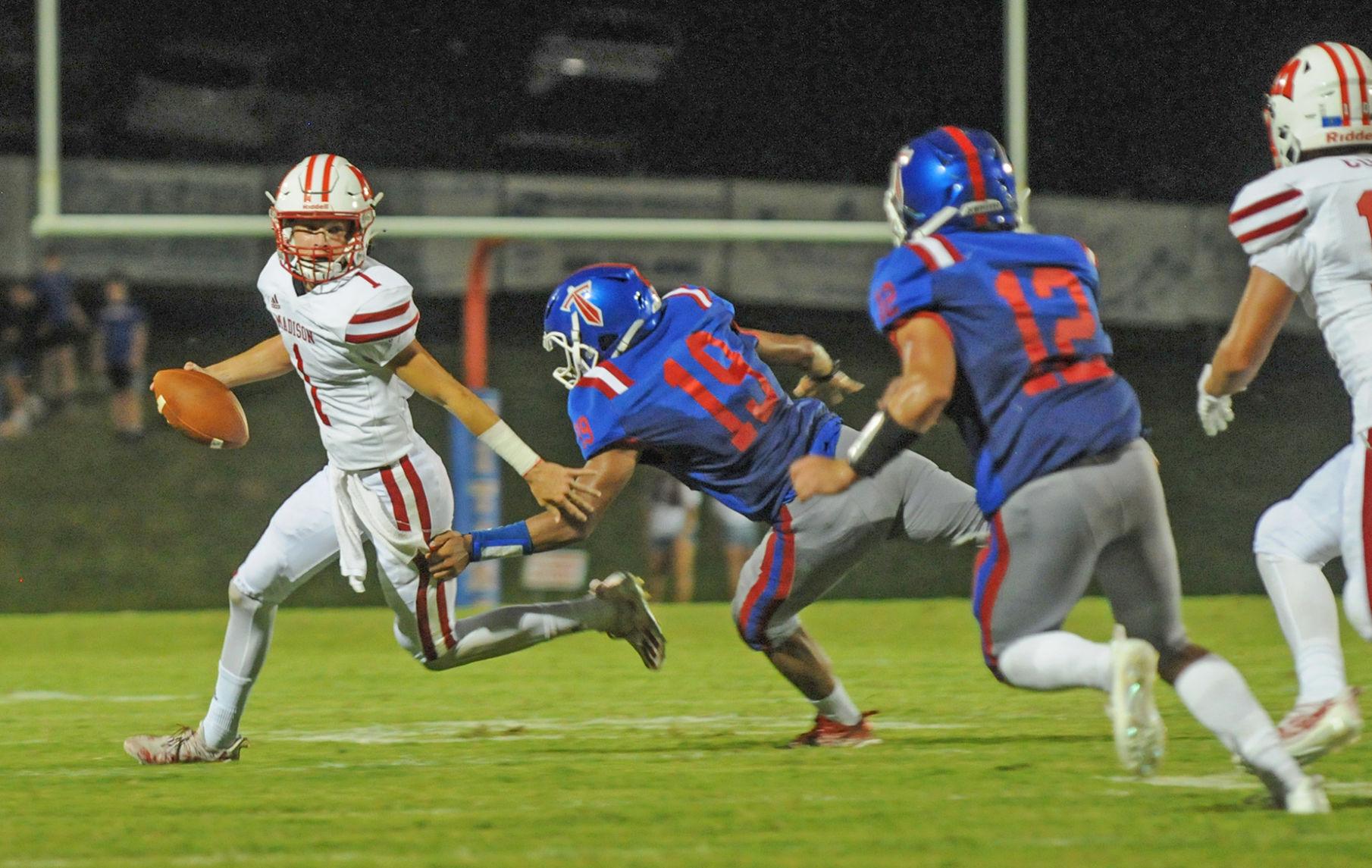 Jeff Krotke and B.J. Walls don’t compete in many barbecue competitions — this year’s visit to Madison was just their second to the Madison Ribberfest BBQ and Blues cook-off — but on Saturday they came away as the overall winners of the Indiana State Championship sanctioned by the Kansas City Barbeque Society.

Both men said there wasn’t any secret to their success.

Their team, Bleacher Bums BBQ, has only competed a handful to times — mostly in Warsaw, just a 15-minute drive from their home in Mentone — and their only other appearance at Ribberfest was two years ago with last year’s event canceled by COVID.

In fact, Ken Schneider, organizer of the Madison KCBS event, said it was only the sixth competition for the Bleacher Bums BBQ team. “We’re expecting great things from them,” he said.

The overall winner is tallied by combining a team’s efforts in chicken, ribs, pork and brisket and Krotke and Walls were both surprised to come out on top. “Oh my gosh, this is great,” said Krotke.

A total of 43 teams from six states competed in this year’s KCBS competition with 60 judges from eight states tasting and picking the winners, according to organizer Schneider.

“It was a good weekend,” said Schneider. “It’s like a family reunion, and many had not seen each other in awhile. It’s a lot of good people, helping each other out.”

In the four main meats, Big Dogg’s BBQ with Mario Ramirez of Maineville, Ohio, was the winner in the chicken category while Risky Brisket with Sean Young of Oswego, Illinois, took the ribs category, Continental Barbeque Company with Kent Schuetz of Charlestown won the pork, and JMB BBQ with Casey Ball of Cincinnati had to top brisket.

McQ Smokers with Jim McPherson of Madison was the winner of the “Anything But” category. In “Anything But,” the meats cooked can be anything but the four main meats. The desserts winner was Continental Barbeque.

No matter how they placed or what prizes they won, there were plenty of happy competitors. The Green Eggs and Ham team, based in Muncie, has been coming to Madison 14 years, according to Eric Baize who said there were 11 members in that group this year. “We have a lot of fun together,” he said, noting they all like to cook, plus they love coming to Madison which was holding its 19th Ribberfest overall. “We have friends here, and enjoy the city. It’s a beautiful town, and it’s neat that they have the blues festival too. It’s a lot friendship, fellowship and camaraderie.”

Eric Merley of Warsaw with the Blue Smoke BBQ Indiana team said he began coming to Ribberfest about four years ago after he and a friend got involved in the competitions. He said their interest in competitions began when they had a friendly contest to prove to each other who could cook better barbeque.

“It wasn’t really competitive, it was just for fun, but that got us thinking about doing competitions,” he said. He’s glad they did. “We meet a lot of good people,” he added, noting that he and his wife, Angie, really love spending time in Madison. “It’s beautiful down here. We really enjoy coming here.”

Jason Ball and Casey Ball with the JMB BBQ team of Cincinnati have been doing BBQ competitions for seven years, but this was their first time competing at Madison. “We’ve always had family activities and other commitments on this weekend, and it’s never worked out for us to come,” Jason said. “Finally, it did, and were glad. It’s been fantastic. It’s beautiful being along the river, and we’ve had a good time. Next year we’re coming here, and we’re canceling everything else.”

Both have a background in barbecue through an uncle in Columbus, Ohio, who in the past operated a business called City Barbeque. “We grew up cooking and had a big kitchen in the house,” Casey said. So when the competition came to Cincinnati, they decided to give it a try.

That “taste” was enough to convince them they wanted to continue to participate in more competitions.

“It’s just the people you meet along the way, and you get to see different towns,” he said. Also, he loves how the competitions drive him to improve the cooking methods. “You take a process and keep working to make it better,” he said.

Tom and Michelle Brinck of Cincinnati’s Extra Mile BBQ team got into BBQ competitions through a friend, Peter Golob, who brought the Red Rock Cafe team this year. They started out together on the same team in 2009, but the Brincks dropped out after a couple of years because they had to care for a parent who was ill, while Golob continued getting more actively involved in the competitions, going to 37 in 2018. But when Golob moved to the Upper Peninsula of Michigan he sold his BBQ smoker to the Brinks, and they began going to competitions again.

“These are fun competitions, and we were hooked,” Michelle Brinck said. 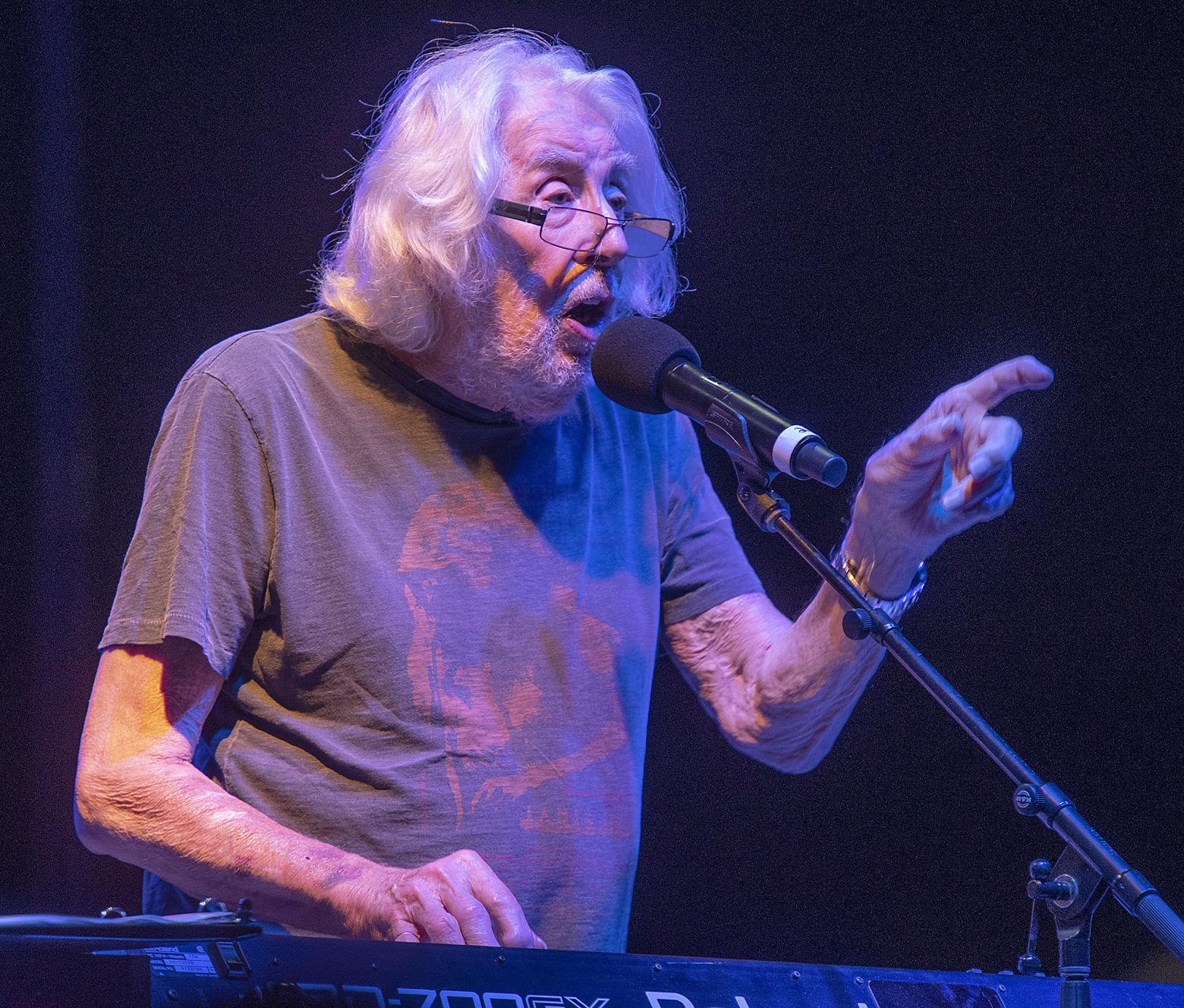 Regulators on Monday gave full approval to Pfizer’s COVID-19 vaccine, according to the Associated Press.

The formula developed by Pfizer and its German partner BioNTech now carries the strongest endorsement from the US Food and Drug Administration, which has never before had so much evidence to judge a shot’s safety. More than 200 million Pfizer doses have been administered in the US— as well as hundreds of millions more worldwide — under special emergency provisions since December.

“Vaccines are one of our greatest weapons against the virus,” acting FDA Commissioner Janet Woodcock said. “We hope this approval will bolster confidence in those who’ve been wavering.”

On Monday, the Indiana Department of Health reported 1,685 positive cases of COVID-19 in the last day, bringing the overall total to 825,549. This follows Friday’s number in which there were 4,120 COVID-19 cases, the first time Indiana has had more than 4,000 new daily cases since mid-January. Meanwhile, no new deaths were reported in the last day, keeping Indiana’s overall death toll at 13,828.

Jefferson County Health Department is accepting walk-ins at its office for COVID-19 vaccinations at its office at 715 Green Road, Monday through Friday, 9 a.m.-3 p.m. Three vaccines — the now fully approved Pfizer as well as Moderna and Johnson & Johnson — are available. Individuals ages 12-17 must receive Pfizer vaccine and have an adult present.

All Kentuckians can sign up for a COVID-19 vaccination appointment near where they live or work at vaccine.ky.gov.

Madison City Council member Amanda Creech, who has worked in the Assessor’s office since 2008, was chosen as County Assessor, opening a vacancy on City Council where Creech has served since January of 2020.

Carla Eades Krebs, perhaps best known locally as a Hall of Fame basketball player for the Cubs, was elected by Republican precinct committee members to replace Creech representing the Second District on City Council. Krebs was one of two candidates for the post competing against Michael T. Scott, a long-time Cummins employee and former member of Madison school board.

Krebs received endorsement from Madison Mayor Bob Courtney, who was the most recent local official elected by caucus back in 2019 before winning election later that year.

“I am honored and humbled,” said Krebs, who noted she is looking forward to serving on City Council. “I want to be a part of making Madison better. I love our city and want to share it with other people.”

Krebs, a 1980 graduate of Madison Consolidated High, moved back to Madison last fall after 40 years living in Missouri. She said she’s had hopes of returning for many years. “I am very happy to be here, and have been looking for ways to plug in, so I can give back to the community,” she noted.

Krebs was an basketball Indiana All-Star in 1980 and 2009 inductee into the Indiana Basketball Hall of Fame. After high school, she played at Central Missouri State University, where she scored more than 2,000 points to become the school’s career scoring leader.

Courtney said both Krebs and Scott were outstanding candidates, but he endorsed Krebs because of the many initiatives the Mayor is working toward to move Madison forward, and he said the city needs someone with Krebs’ determination in making a difference in the community.

“We all (in Madison) know about Carla as a basketball player, and that she was an Indiana All-Star, and went onto a great career at Central Missouri State. We know of the hard work and dedication that Carla puts into anything she does,” Courtney said, adding that Krebs is a person he feels can truly make an impact in her work for the city.

Courtney also said Krebs is someone who moved away from the city and returned, which provides another dynamic in that she also has the view of someone moving into the community. “We’re wanting to bring people and attract them to city,” said Courtney, noting Krebs can provide some insight to that while serving on City Council.

Krebs and her husband, Joe, are happy to be living in Madison. “I’ve been a supporter of Madison for 59 years,” said Krebs, who noted she’s also been a supporter and encourager of the work Courtney is doing for the city as mayor.

Creech has worked in the County Assessor’s office since 2008 with that being her first job in the workforce after graduating from Madison Consolidated High School in 2008. “I know the ins and outs of everything in the office,” said Creech, adding that she came into the County Assessor’s office doing entry level work, worked her way up to third deputy, then second deputy, and then became first deputy in 2015. She has worked under three County Assessors including Margaret Hoffman Bridgford, Tina Glesson and Mannix. Additionally, she has attained the Level III certified Assessor-Appraiser certification.

Despite her vast experience in the County Assessor’s office, Creech said she hadn’t felt comfortable seeking elective office until her run for City Council District 2, a position in which she was elected in the general election of 2019.

“That was the boost I needed to do the election process,” said Creech, who said she loves working in the Assessors’ office and plans to seek a full term during the 2022 election. “It’s a great job.”

Creech said she enjoyed being able to serve on City Council. “It was a great opportunity to make a difference in our city,” she said , noting she was pleased to be a part of bettering the city for what it can be for her children, Mason and Elizabeth.

Creech planned to be sworn in on Monday by Jefferson Circuit Court Judge D.J. Mote. Krebs will be sworn in by Courtney at the next City Council meeting.