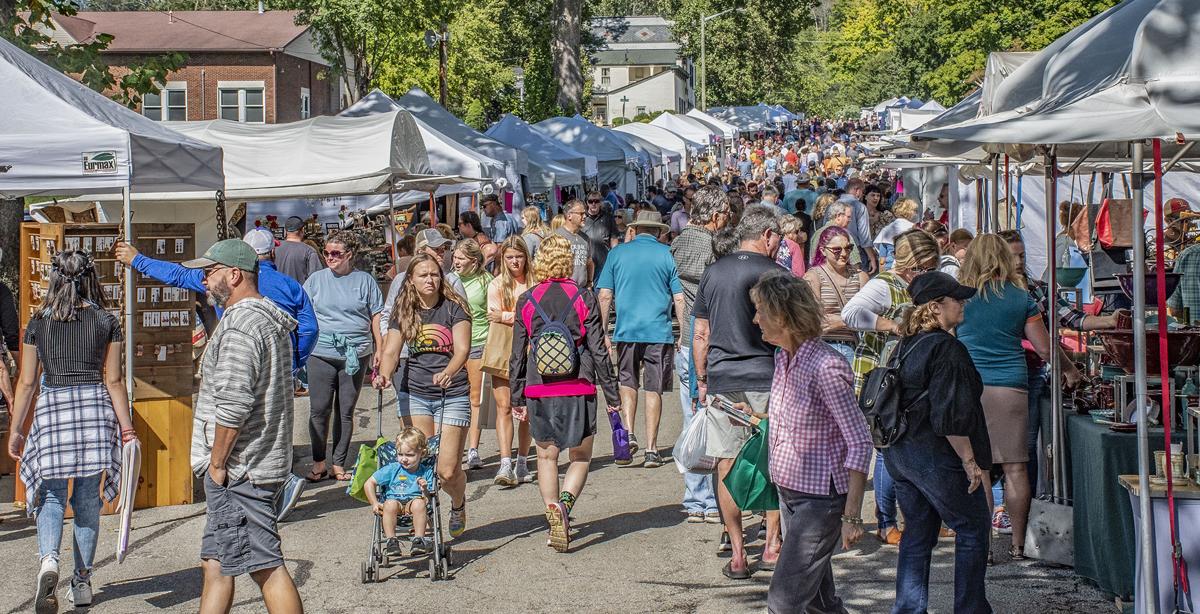 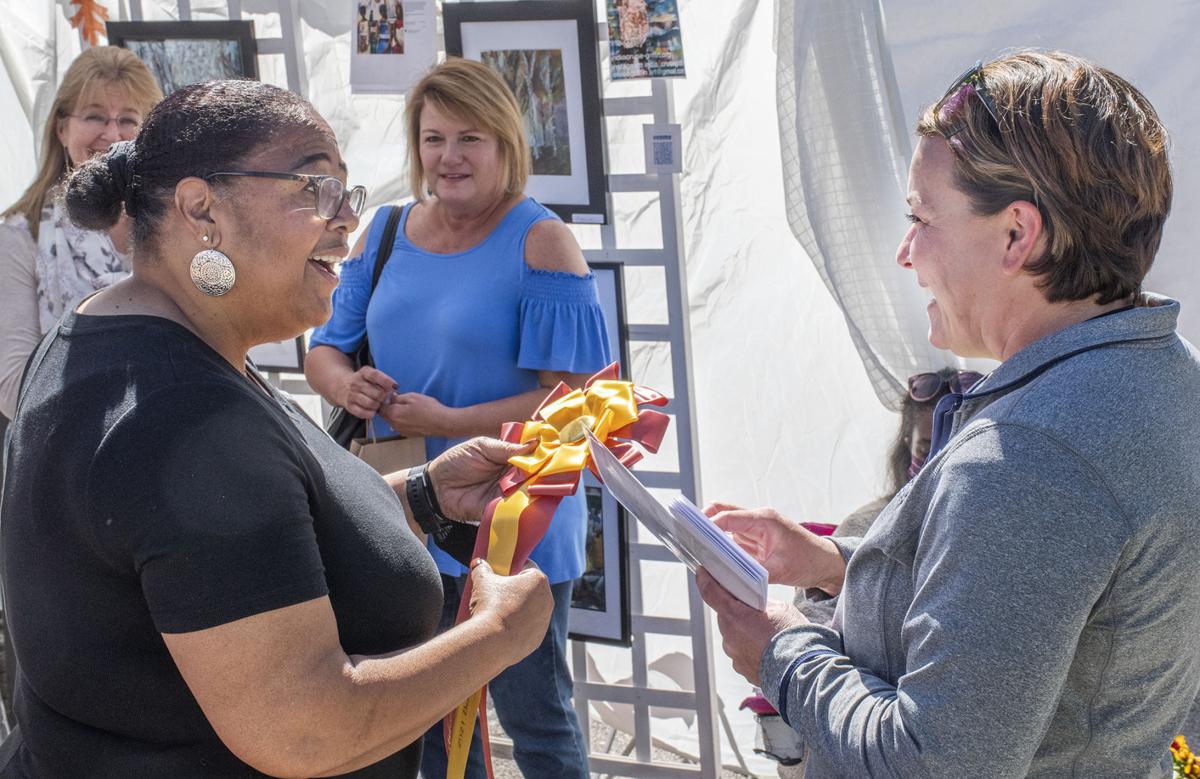 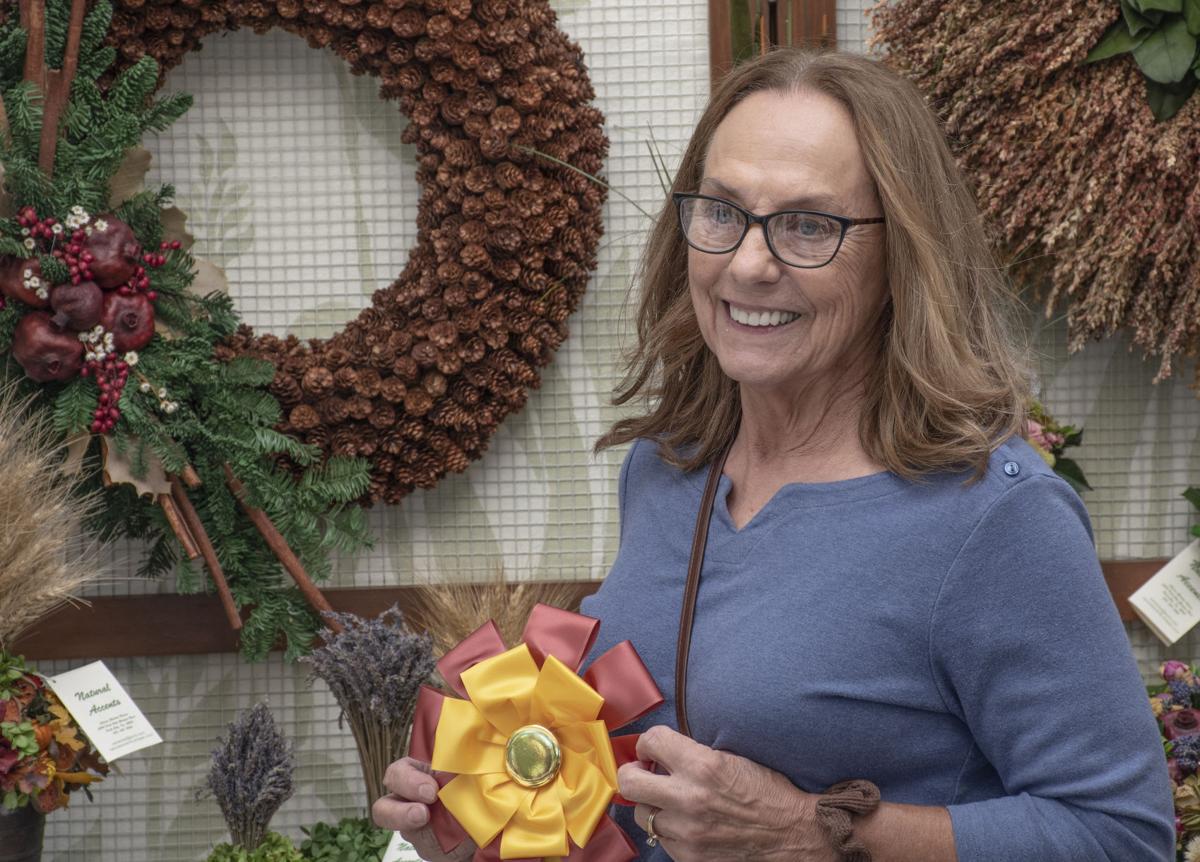 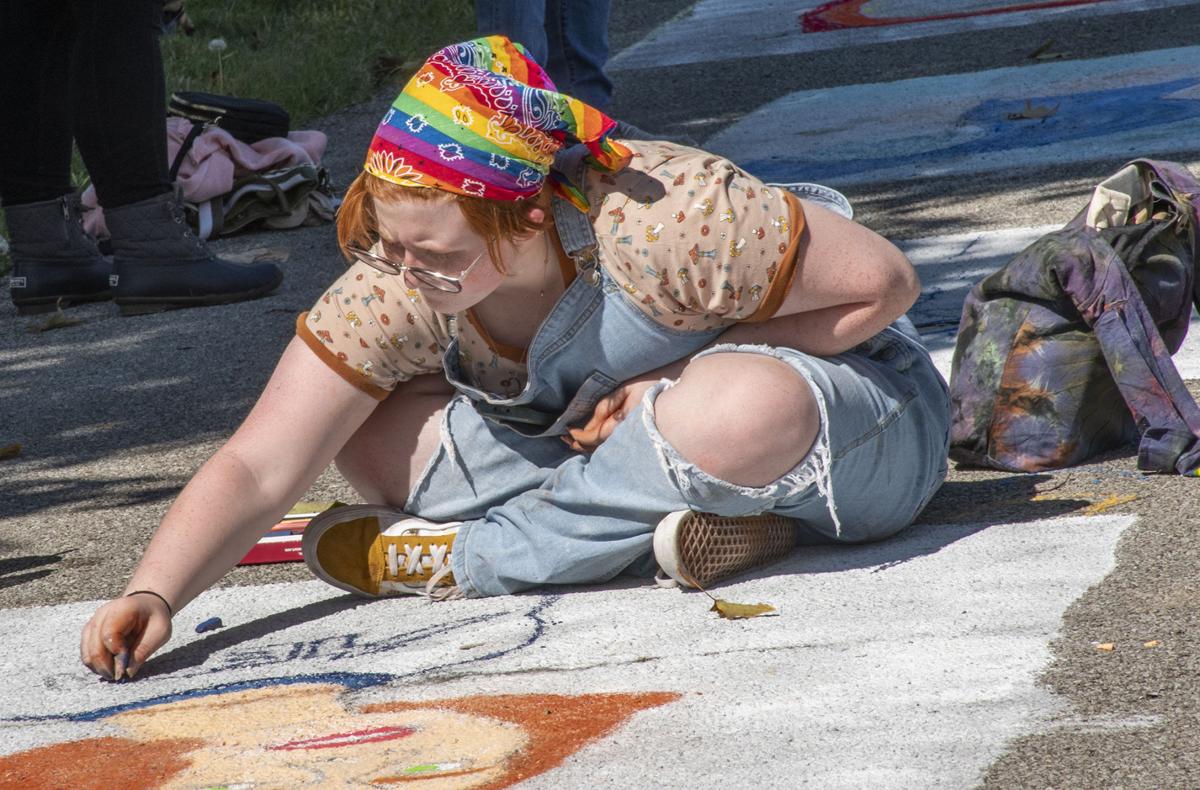 With mild weather and sunny skies, the 50th Madison Chautauqua Festival of Art could not have fallen on a more perfect weekend.

With a strong turnout both Saturday and Sunday, participating artists and craftsmen and food vendors are most reporting a successful weekend.

“Artists say it was a record weekend for them, and we had food vendors that sold out early,” said Chautauqua coordinator Kara Hinze. “It was nothing but good news.”

“It was well-attended and much comparable to past years,” Madison Police Chief John Wallace said of the thousands of visitors who visit Chautauqua, Old Court Days and the Madison business district along Main Street.

India Cruse-Griffin, a mixed media artist from Richmond, took home Best of Show honors in her first-ever participation at Madison.

“I was so excited and surprised,’ said Cruse-Griffin, who was encouraged to participate in the event by her cousin, Cindy Porter, who lives in Madison.

Cruse-Griffin, 63, has been creating her art for many years in what she characterizes as mixed media collage, but hasn’t attended art shows in recent years while her focus was on family. Now, with children older and more on their own, she’s gradually beginning to rejoin the art circuit.

Cruse-Griffin began painting at an early age, but migrated to mixed media collage as an art form when her daughter, then age three, tore pages out of magazines, and when Cruse-Griffin looked at them she was inspired to “make a picture from that.”

She said some who saw her creations thought they were “really nice,” so she began to develop her art style as a professional artist that has evolved over the years. In her early adulthood, she said her paintings were more realistic, but now they have become “a more free type.”

Cruse-Griffin said it’s “definitely gratifying” to know the Chautauqua judges recognize her work, but also appreciated that Chautauqua visitors saw value in her work by making purchases to take home. “It’s nice that a lot of people love my work,” she said. “It’s a good feeling to have when you get up in the morning.”

Sharon Haines of Park City, Kentucky, was recognized for Best Presentation. She first attended Chautauqua in 1997 and 2021 marked her 22nd event in Madison.

“I’ve been coming for a long, long time, and it’s always great being here because of the beautiful setting, the people are wonderful, and it’s always well-organized and well-managed,” she said.

Haines creates with all natural materials she grows in her garden. They are then air-dried or preserved with glycerin and used to create table designs, wall designs, wreaths and more. She noted it’s a process that’s a lot of work starting with raising the garden from seeds, then watering, harvesting and drying and preserving the plants.

Born and raised in Michigan, Haines became an art teacher, but when she moved to Kentucky wasn’t able to find a teaching job.

“So you create your own,” she said on developing art through the plants in her gardens. She’s done that now for the last 46 years — not only an artist, but a master gardener — certified through the Kentucky Extension Master Gardner Program.

Carrie Wild of Indianapolis was the first place winner for Fine Art. “I’m very excited. This was completely unexpected,” said Wild, noting it was her first time at Madison Chautauqua and she’s glad she came.

“The weather was perfect, and I loved that it’s near the river, and the beautiful houses,” she said. “Madison is really a neat town.”

Wild, a fine artist and illustrator, launched her career as an artist in 1998 by establishing Wildworks in which she began doing freelance illustration work before shifting to a career as a full-time artist almost 10 years ago.

Wild’s ink and watercolor paintings are all about nature with many focusing on birds and insects. She noted she was drawn to nature as child by the bird feeder in her family’s yard where she would watch the birds. Wild also explores more of nature, mostly the “quieter animals,” she said, with owls, deer, squirrels and rabbits among her inspirations.

Dawn Hatzidakis of Crestwood, Kentucky, took first place for Fine Craft. Making her third appearance at Chautauqua, Hatzidakis, is a second-generation metalsmith with her parents both being jewelry designers. She designs and makes copper jewelry including pendants, earrings, bracelets, cuffs, hair accents and more.

Her work has grown in popularity and she often sees familiar faces at various art shows. Eva Perkins, of Floyd Knobs, is a regular customer who was seeking jewelry from Hatzidakis on Sunday afternoon.

“I do a lot of the art shows. We support the arts,” Perkins said, noting she is particularly a fan of Hatzidakis’ copper jewelry.

Hatzidakis said her jewelry is “more artsy” and cannot be purchased in a store. “People tell me it’s unique and different; not like anything they have seen before,” she said, adding she makes each piece individually to produce “something that’s one-of-a-kind.”

Peter Rujuwa of Greenwood was second in Fine Art. A third place finisher in 2016, Rujuwa developed his interest in sculpture growing up in Zimbabwe. His stone sculptures are tribal art themed after his tribe “Shona” of Zimbabwe. The medium used is serpentine stone, which provides more hardness for creating his unique shapes.

Lizzie Gulick of Louisville was second in Fine Craft. Gulick, the Best of Show winner in 2018, said she uses all natural plant dyes and handmade felt for the wearable art she creates. “I have been into textile art for a long, long time,” noting she’s been doing it for 20 years and was participating in her fourth Chautauqua. “This is a good show for artists,” she said. “I love coming here.”

Patty Coulter of Greenwood was third in Fine Art. Coulter was participating in Chautauqua for the first time. She grew up in Indiana but moved to California where she became an interior designer while falling in love with watercolors. “I’m now four to six hours in the studio every day,” she said, noting she has studied in Italy, Spain and France. “I love to sketch whatever I see.”

The husband and wife team of Bill and Gean Bowen of Charlestown took third in Fine Craft. The Bowens have been making porcelain and stoneware pottery for more than 20 years and met while getting their Master of Fine Art degrees at Indiana State University.

He said they function perfectly together in that he enjoys creating the form of their pottery while she likes carving and fire glazing. “We have been here many times for the Chautauqua and always enjoy being here,” he said.

Nathan Murphy of Madison received honorable mention recognition for his craft building guitars. Murphy said he began pursuing the art of instrument building after initially considering furniture. “If I build a guitar, I can create something that becomes a voice, and it gets to be a blessing,” he said.

Murphy said building each guitar, takes about 40 hours of work and three weeks to dry. “They are durable and well-built, so you can take on a trip or to campfire,” he said.

The 50th Chautauqua had originally been scheduled for 2020 until the COVID pandemic canceled it and other festivals. The 51st Madison Chautauqua Festival of Art is already marked on calendars for 2022 when the artists, craftsmen and their fans are scheduled to reconvene in downtown Madison on Sept. 24-25.