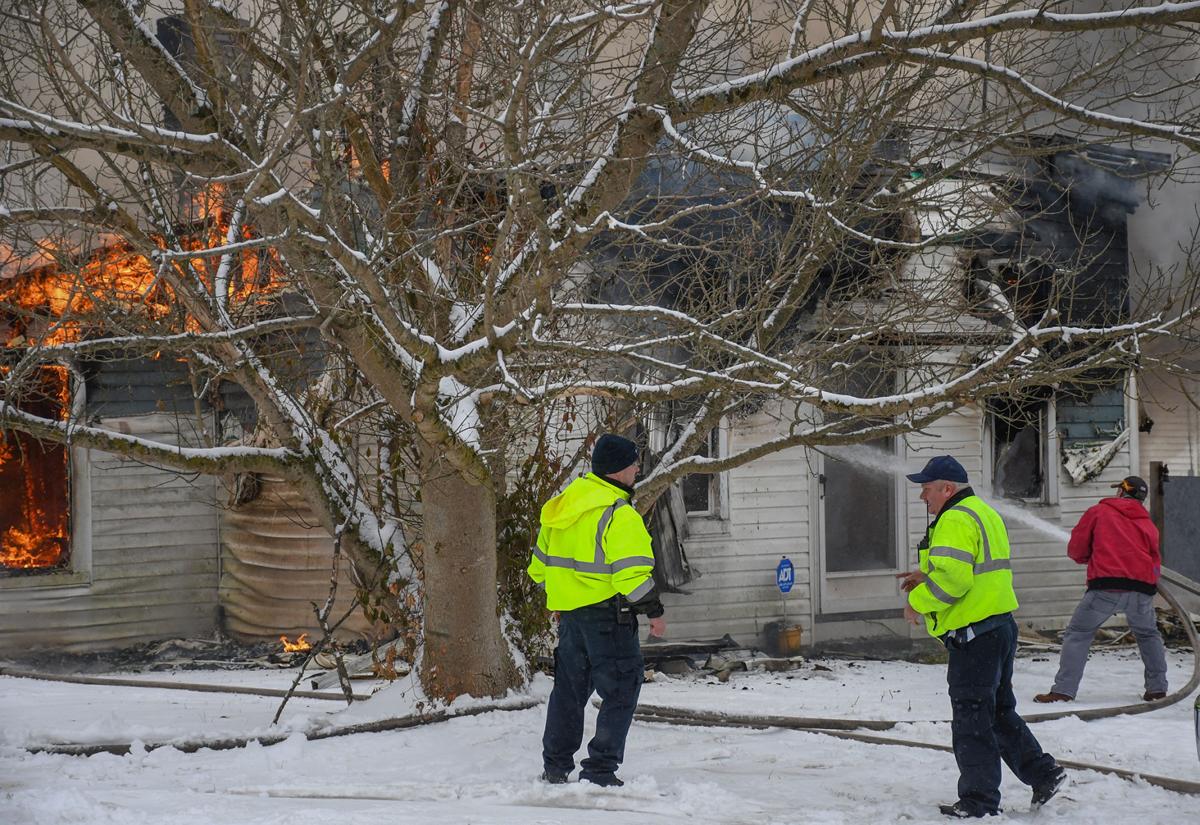 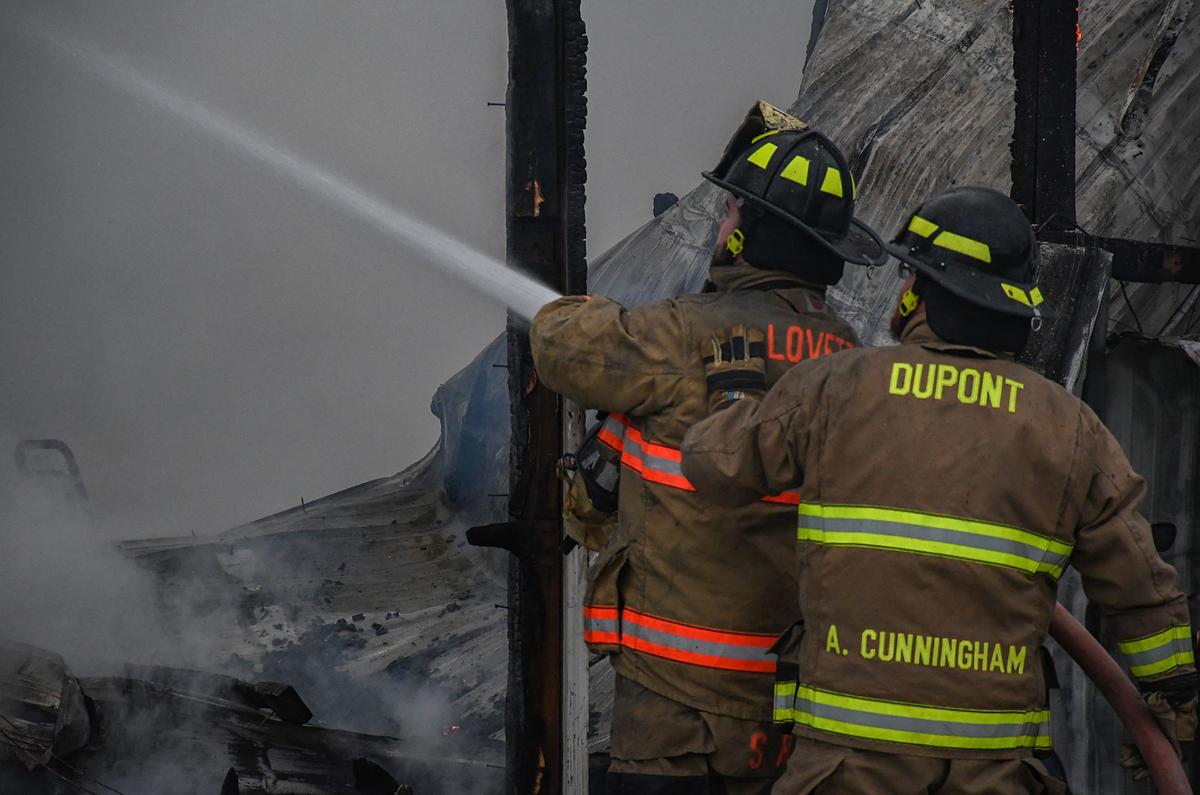 Firefighters put water on the smoldering ruins of a pole barn in the 8200 block of North Middlefork Road in Lancaster Township Wednesday. The blaze destroyed the building, which included a woodworking shop and storage. 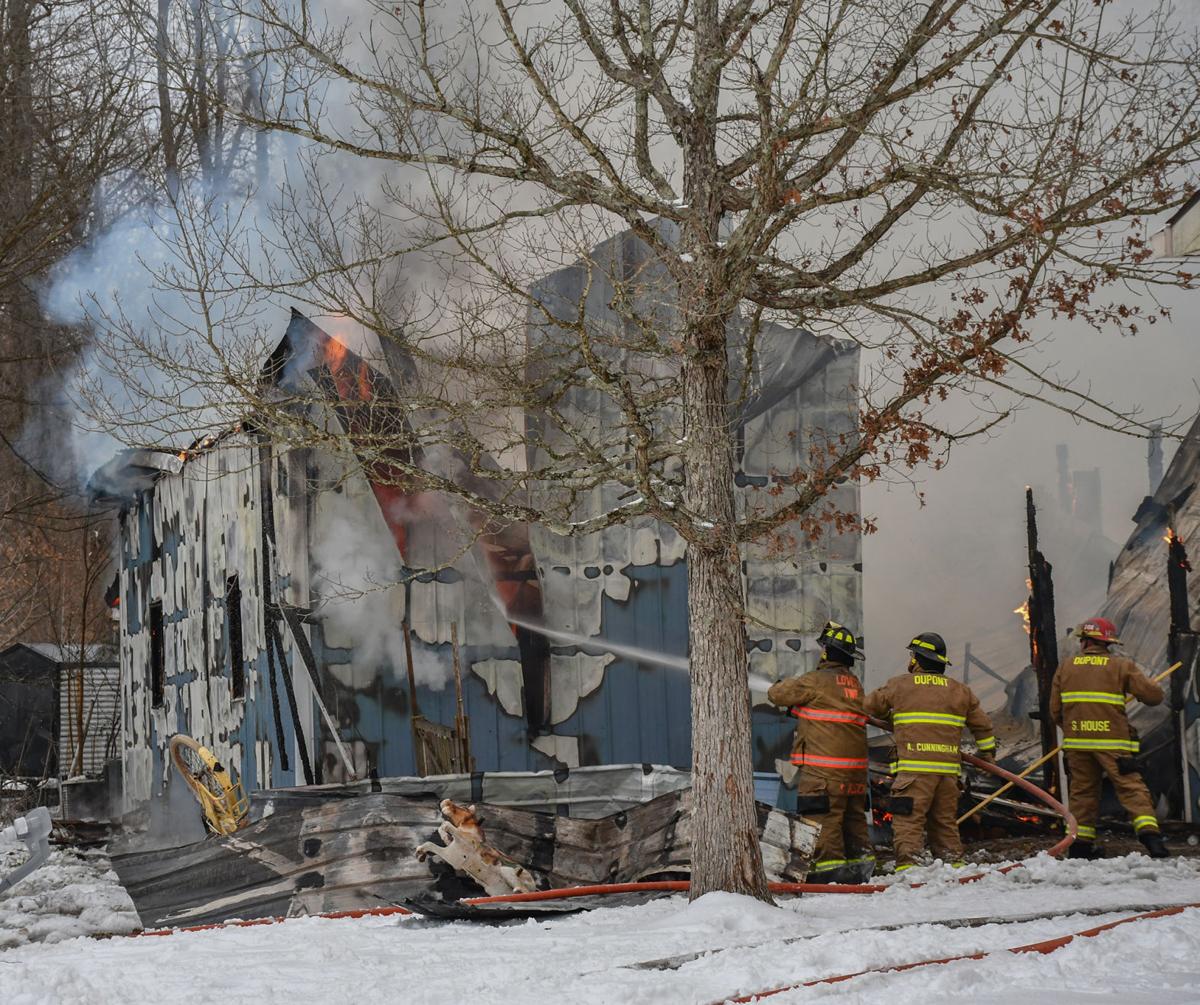 Firefighters put water on the smoldering ruins of a pole barn in the 8200 block of North Middlefork Road in Lancaster Township Wednesday. The blaze destroyed the building, which included a woodworking shop and storage.

Battling through frigid temperatures and a snowstorm, county firefighters have been pushed to the limit this week with multiple fires in different locations throughout Jefferson County.

“It has been a busy week for our firefighters,” said Madison Township fire chief Robert Black, whose department worked two big fires on Tuesday night and Wednesday morning and then several others over the rest of the week. “We appreciate all their hard work and dedication.”

In all, Black said Madison Township has been involved in nine fire calls since Tuesday either as the primary responder or to provide mutual aide.

On Thursday morning, fire destroyed the home of Terry Hatton in the 100 block of South Brooksburg Main Street in Brooksburg. Hatton had been gone for a short time and when he returned home found the home fully engulfed in flames, according to Milton Township Fire Chief Troy Ayler. In addition to the home, Hatton lost two Huskie dogs in the fire, which Ayler said firefighters recovered and helped to bury in the backyard.

Ayler received the fire call at 9:37 a.m. after neighbors reported seeing flames on the roof. Jefferson County Sheriff’s Department deputies were first on the scene and began fighting the blaze while Milton Township Fire Department firefighters arrived next.

When Ayler arrived he said flames had spread throughout the entire house. There was a propane tank near the house that he said was a cause for safety concerns but firefighters were successfully able to control the blaze enough to keep it from reaching the tank.

Ayler said he didn’t know the cause of the fire, but that it seemed to start in the area of a wood stove. Firefighters battled the fire until 1:30 p.m. and then returned early that evening when the fire rekindled. There were no injuries in the fire other than the pets.

Ayler said the house had recently been remodeled, and that Hatton lost “antiques and glassware and things that can’t be replaced” in the blaze.

On Wednesday afternoon, fire also destroyed a pole barn in the 8200 block of North Middlefork Road in Lancaster Township. The pole barn was part of property owned by Gary and Pamela Jackson, and located behind a house. Residents were home when they noticed the barn on fire. The house and another structure were near the pole barn, but Dupont Fire Chief George Canfield said firefighters were “able to contain the fire to that one building.”

The pole barn, which Canfield said included a woodworking room and storage area, was totally destroyed. The fire was reported at 4 p.m and firefighters battled the blaze and were then on the scene until about 8:30 p.m. Canfield said one of the challenges was that the fire got into some clothing that was stored in the building and that the blaze kept going as it burned through the clothes. He said the cause of the fire has not been determined.

On Thursday at about noon, Black said Madison Township firefighters had just returned to their firehouse from assisting with the Brooksburg fire when they got a call-out concerning a fire in the 100 block of Horizon Drive in Madison Mobile Village. The resident was home when he saw smoke coming into the trailer through the duct work. Black said the fire was caused by wires that had shorted out underneath the trailer.

“We got it knocked out really quick,” said Black, adding damage was limited to a water line and insulation under the trailer. He said the water line underneath the trailer actually assisted in putting the fire out. The water pipes were plastic and “as the fire melted the water pipes, water began pouring out.”

“When the vehicle started, it made a sound and started burning,” said Black, adding that firefighters were able to respond quickly and the fire was out within 15 minutes of the call.

“The car was destroyed,” said Black. “Anytime you have fire in a car, it’s totaled” because ruins the mechanics of the vehicle. There was also damage to a nearby shed.

Once again Rykers Ridge Fire Department assisted at the scene of the vehicle fire.