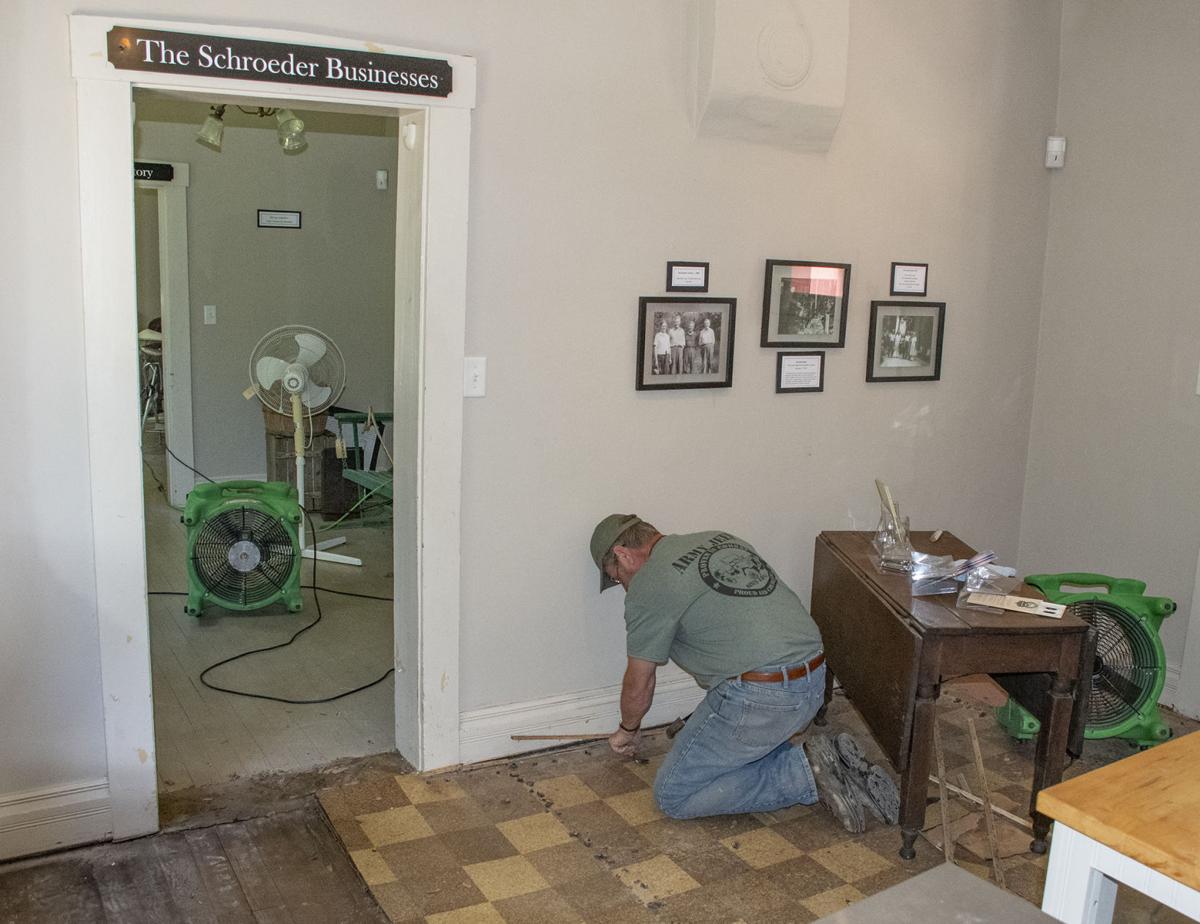 David Cart, director of preservation and maintenance for Historic Madison Inc., takes up linoleum damaged by Saturday’s flash flooding at the Schroeder Saddletree Factory Museum. Several fans were moving air throughout the building to assist with drying the structure. 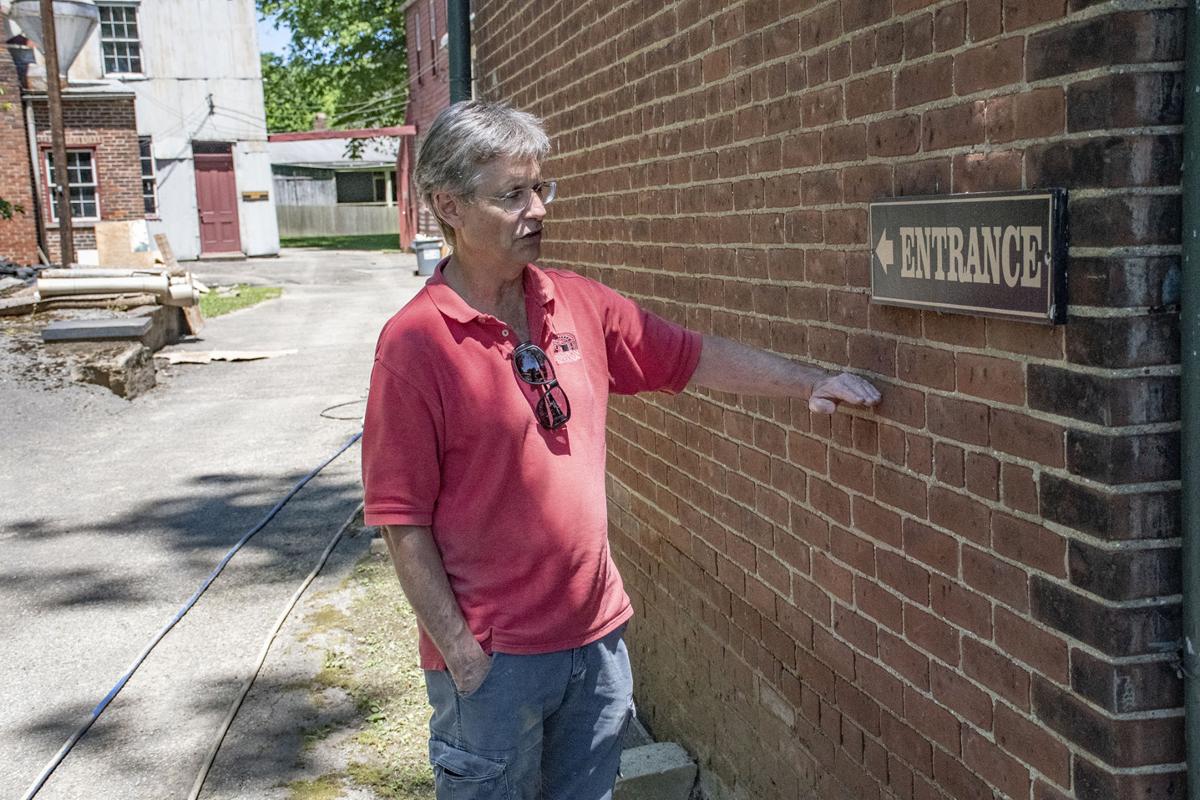 John Staicer, president and executive director of Historic Madison Inc., shows how high a 1902 flash flood reached on the walls of the Schoeder Saddletree Factory home. By comparison, water from Saturday’s flash flood, reached about half as high onto the same brick wall at the museum.

David Cart, director of preservation and maintenance for Historic Madison Inc., takes up linoleum damaged by Saturday’s flash flooding at the Schroeder Saddletree Factory Museum. Several fans were moving air throughout the building to assist with drying the structure.

John Staicer, president and executive director of Historic Madison Inc., shows how high a 1902 flash flood reached on the walls of the Schoeder Saddletree Factory home. By comparison, water from Saturday’s flash flood, reached about half as high onto the same brick wall at the museum.

As president and executive director of Historic Madison Inc., John Staicer knows how important historic preservation is to the City of Madison.

But on Tuesday afternoon, as he worked to clean up flood damage to the Schroeder Saddletree Factory Museum and the African Methodist Episcopal Church in downtown Madison, Staicer was thinking more about the other residents and neighbors who were impacted by Saturday’s flash flooding.

“Our damage was bad,” Staicer said, but for “those who lost houses and possessions, and didn’t have flood insurance, it’s much harsher” and what they are going through is horrible.

On Friday, Staicer and his wife, Maureen, had left Madison for a vacation and were in Akron, Ohio, when she saw posts on Facebook about flooding in Madison.

“When I saw it was over the bridge” at Crooked Crook on Milton Street, “I knew it was not good and I came back here. Over the years, I’ve seen floods come and go on Crooked Creek, but never over top of the bridge, so I knew that it was bad news for Saddletree.”

Historic Madison Inc. has owned the Schroeder Saddletree Factory since the 1970s, and Staicer said “this is the worst we have seen,” in terms of flooding during that time. In the past there has been high water but never enough to get into the museum while HMI has owned the property.

As a historian, Staicer is well aware of Madison’s history with flooding and its impact on the Saddletree Factory property, which is located alongside Crooked Creek at 106 Milton Street. Located on the side of the Schroeder house is wording long ago etched into the bricks indicating the high water mark when the creek flooded in January of 1902.

On Tuesday Staicer pointed out darkened bricks — about 10 rows up on the structure — where Saturday’s flood waters climbed.

Staicer said the flash flood put 18 inches of water into the front two rooms at the Saddletree home and water throughout the rest of house plus “a ton of mud in the basement,” but none on the floors inside the Blacksmith and Assembly Shop building that sit at a higher point on the property. He also noted there was 12 inches of water in the ME Church property owned by HMI at 309 East Fifth Street, which flooded for the second time in six years after also being hit by a flash flooding in 2015.

Located in the front two rooms of the museum is the Schroeder’s piano that visitors have been allowed to play when they tour the museum. Staicer is concerned whether it will ever play again. “It took in 18 inches of water, and we can clean it up and make it look nice again,” but he’s not sure if it will be playable.

Special period carpet, a replica of carpet from the house, was also soaked. The plan is to clean it if possible.

“I hope we can clean it up and re-lay it,” he said, noting that will depend on how well it cleans. “Hopefully, the wool doesn’t shrink so it can fit back into it.”

Replica wallpaper also will need to be replaced, but before they can even do that they will need to check for plaster damage and possible structural damage and make sure the walls are dry.

“It’s not just what you see on the surface,” he noted.

Staicer estimates it will take some time for Saddletree Museum to be repaired and again open for tours. In addition to the force of the water, he said water also got into the house by soaking through the bricks.

“With thousands of gallons of water, it will take awhile to dry out,” he said, adding that flood waters were left standing against the bricks for maybe a couple of hours — “long enough for the brick to absorb the moisture” and so that the wetness was still showing Tuesday afternoon.

“We are going to let the whole building dry and that could take a couple of months,” he said.

At the same time, coping with the flood damage did allow another layer of history to be peeled away and exposed to historians. While removing flood-soaked linoleum from the 1950s or 1960s, they found an even older linoleum that he thinks dates back to the 1920s.

“We found out more history about the building,” Staicer said, describing the discovery as a “mixed bag” because “I didn’t want to learn it this way.”

Staicer said damage to the AME Church was mostly from water and mud and that except for a few benches there has been “nothing in there since the last flood.”

“We had taken everything out,” he added, noting HMI just recently received a grant to repair the mechanics of the building destroyed by the 2015 flood.

“We want to rebuild in a way so that it’s flood proof” in terms of the electrical system, air conditioning and heating system by placing those systems “high enough from the ground to not be impacted.”

Staicer said while they can’t stop water from getting into the building during flash flooding, maybe they can “mitigate the flooding by moving the mechanics up above.”

There’s plenty of work ahead in recovering from Saturday’s flood — as well as the one from 2015 — but Staicer said all HMI can do is keep moving forward in its mission to preserve Madison’s past for the future.

“We’ll get it back together sooner or later,” he said.