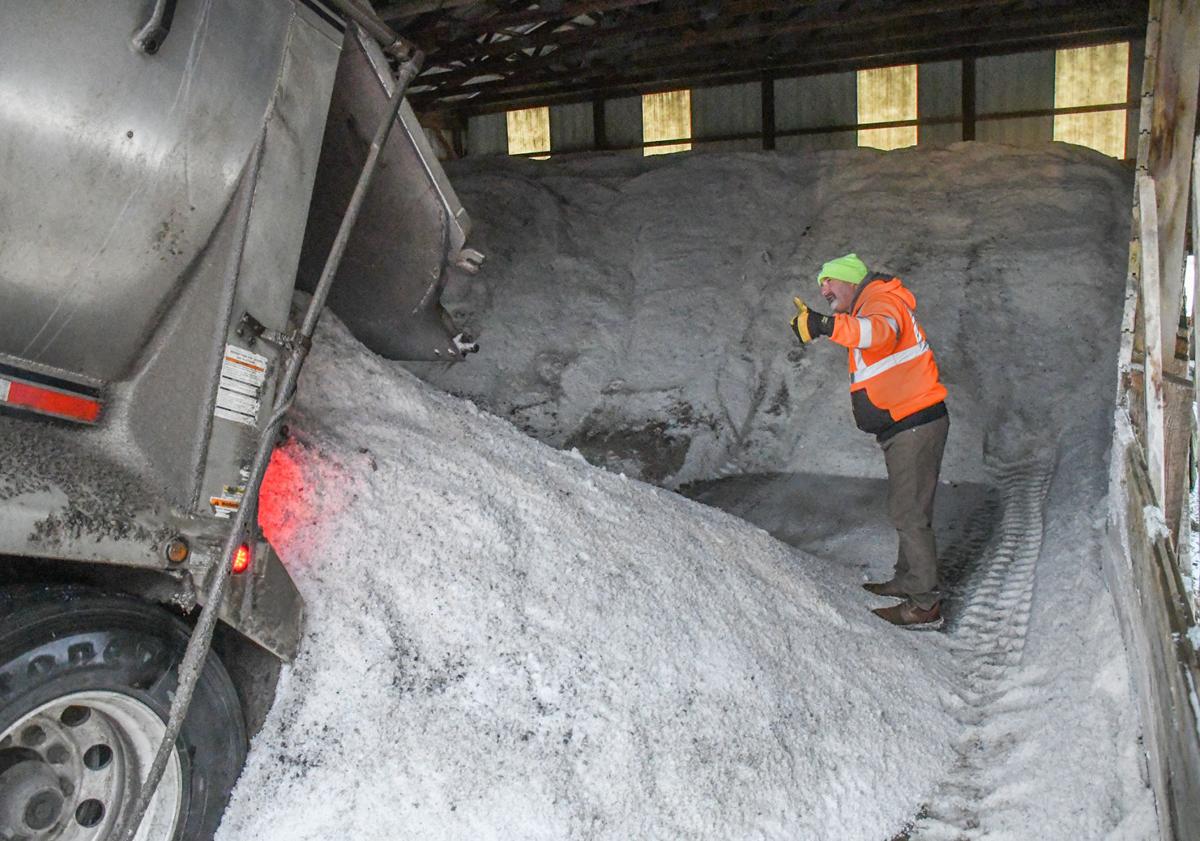 Mike Peak, shift supervisor for the Madison Streets Department, accepts a truckload of road salt ahead of Monday’s snowstorm — some of the 160 tons the city received Sunday and Monday. Prior to the delivery, the city was looking at possibly rationing its salt for hills and major highways after recent snow and ice had cut the supply on hand to about half of normal. 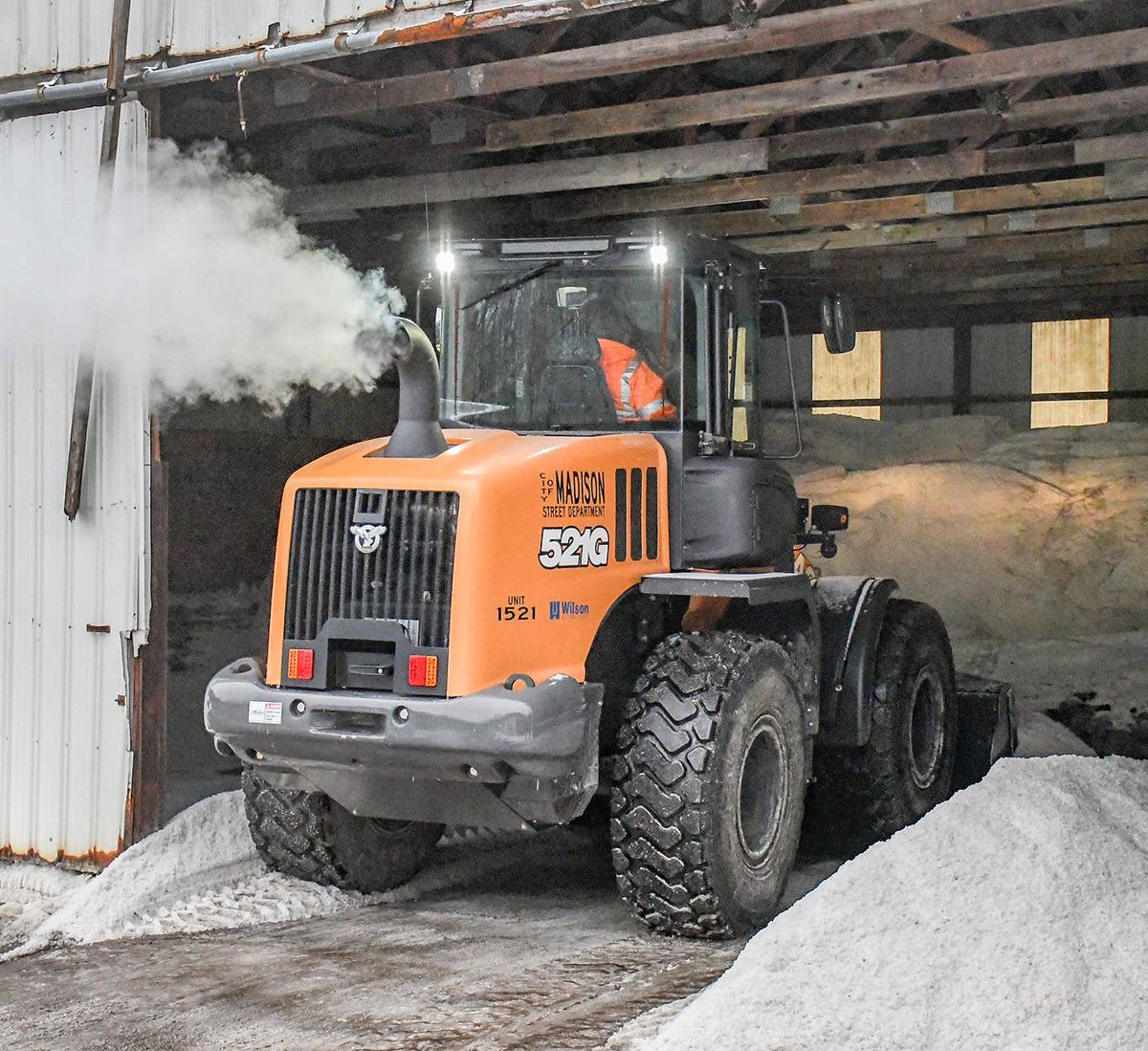 A City of Madison Street Department loader gathers a bucket of road salt to load plow trucks while battling Monday’s first wave of what could be several snow storms totaling more than a foot of snow this week.

Mike Peak, shift supervisor for the Madison Streets Department, accepts a truckload of road salt ahead of Monday’s snowstorm — some of the 160 tons the city received Sunday and Monday. Prior to the delivery, the city was looking at possibly rationing its salt for hills and major highways after recent snow and ice had cut the supply on hand to about half of normal.

A City of Madison Street Department loader gathers a bucket of road salt to load plow trucks while battling Monday’s first wave of what could be several snow storms totaling more than a foot of snow this week.

Weather forecasters have been tracking a winter storm form and bear down on the Midwest and Ohio River Valley for days, so when the warning was issued on Sunday, local officials were already planning for the worst.

“We’ve not seen that level of snow in a long time,” said Troy Morgan, Jefferson County Emergency Management Director, on the more than foot of snow forecast to come in weaves. “If it comes to fruition, it will be a challenge.”

Early Monday afternoon as the weather began to shift, Morgan was updating the county’s road status to “Orange” or “Watch” status, indicating conditions were already threatening the safety of the public and the forecast was for things to get worse.

On Sunday, the National Weather Service office in Louisville issued a winter storm warning. Snow started falling in the area sometime 3 a.m. Monday with one to three inches of accumulation by 8 a.m. Monday. The storm was tracked to produce snow in two separate band — the second bigger front — starting Monday afternoon, and expected to continue overnight.

On Monday morning, Morgan said that in the hours after midnight Sunday going into Monday morning, “we didn’t get as much as they expected. We got closer to one than three, but if it does what they say it’s going to do we could end up with 10 to 12 inches. Last week we got seven inches, and it’s still there” because temperatures haven’t gone above freezing to significantly melt it. “If you put the old seven with the new 12, it stacks up pretty quick,” he noted.

Madison Mayor Bob Courtney said for the rest of the week city workers will be focused on clearing streets. “We’re putting public safety first,” he said.

Street crews were at work by 4:30 a.m. Monday and were scheduled for 12-hour shifts.

Keeping up with the weather can be a challenge when the “snow comes down faster than they can get it,” said Courtney, who asked for the community’s patience as the city battles to keep up with the challenges of the winter storm.

“We have 65 miles of streets in city and 1,300 lane miles. We have a lot of streets,” he said, adding that’s particularly difficult as the winter precipitation keeps coming.

On Saturday, the city highway department received two truckloads of road salt, and by 1 p.m. on Monday they had received six more, according to Street Superintendent Tony Sorrells. He estimated each truck carries 20 tons of salt, making Monday’s delivery alone 120 tons.

Because of the emphasis on clearing streets during the winter storm, Sorrells said recycling pickup will be delayed. Presidents Day on Monday had already pushed back garbage pickup and additional delays could continue toward the end of the week, he said.

Che city highway department will be running two 12-hour shifts daily with six workers per shift this week to keep plows, salt spreaders and garbage and recycling trucks at work.

“We’re going to do the best we can” to keep the streets clear, said Sorrells, who praised his workers. “They do the job and get it done. I just stay out of the way. They are good guys. It’s a team effort,” he said.

Morgan said the Jefferson County Emergency Management agency held a meeting Sunday with other local emergency services providers to share information, resources and plans that will be used to deal with the snow emergency.

“We asked, ‘What can do to help them, and what do they need,’ ” Morgan said, adding the effort will involve following strategies that have been used in past storms, but it’s still important to coordinate efforts and make sure everyone is on the same page.

Morgan said the “Orange” or “Watch” road status recommends only essential travel — such as to and from work or in emergency situation — and emergency plans should be implemented by businesses, schools, government agencies and other organizations.

On Monday morning, Jefferson County’s road status was “Yellow” or “Advisory” but soon was elevated to “Orange.”

“This is as a result of the snow we had a few days ago,” Morgan said of the “Yellow” rating.

Morgan has the authority to declare up to “Orange” levels, but the highest local travel advisory level, “Red” or “Warning” must be declared by the County Commissioners. A “Red” level would restrict travel to emergency management workers only — otherwise everyone else should stay off the roads and preferable stay home.

If it comes to that, Morgan said only key, essential personnel, such as medical or emergency workers, will be permitted to travel.

“They will be our focus and priority in getting those people back and forth, or getting them to where they stay closer to where they are working until the storm blows over,” he said.

Morgan encouraged local residents to be mindful of their surroundings and make appropriate changes to any plans they may have over the coming days.