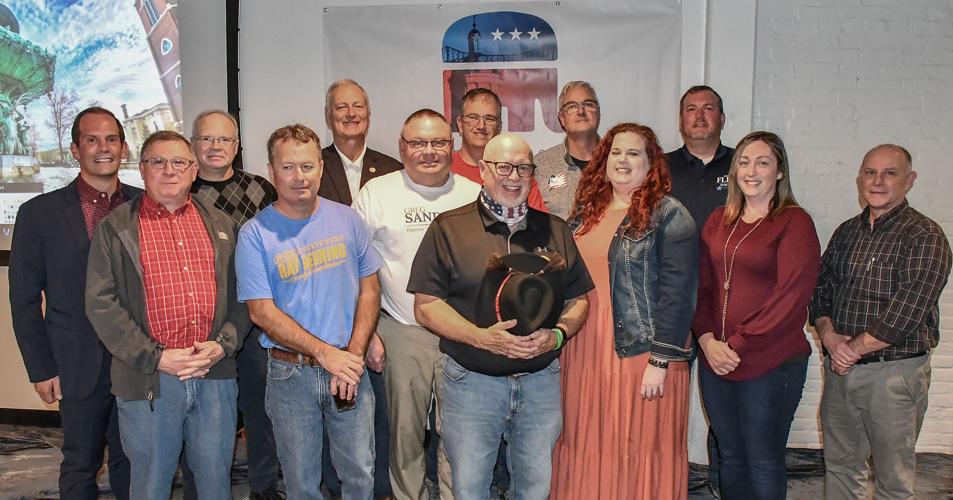 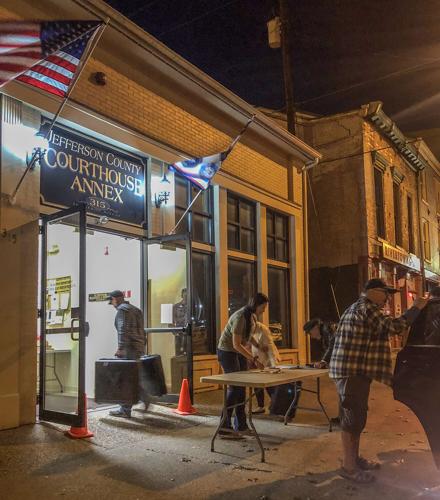 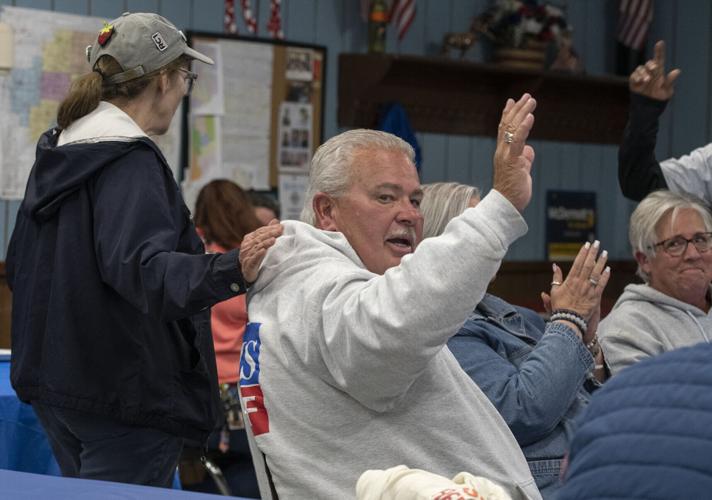 Jefferson County Sheriff candidate Tim Davis (center) thanks his supporters after the final vote totals were read at the Spence Schnaitter Democratic Headquarters in downtown Madison. Davis lost to Republican Ben Flint 6,016 to 3,820.

Incumbent Jefferson County Prosecutor David Sutter (left) checks election results on his phone while stopping off at Democratic Party headquarters as election results came in Tuesday night. Sutter, who ran unopposed for relection, was one of the party’s few bright spots in what was essentially a Republican sweep of contested races locally.

Jefferson County Sheriff candidate Tim Davis (center) thanks his supporters after the final vote totals were read at the Spence Schnaitter Democratic Headquarters in downtown Madison. Davis lost to Republican Ben Flint 6,016 to 3,820.

Incumbent Jefferson County Prosecutor David Sutter (left) checks election results on his phone while stopping off at Democratic Party headquarters as election results came in Tuesday night. Sutter, who ran unopposed for relection, was one of the party’s few bright spots in what was essentially a Republican sweep of contested races locally.

Jefferson County Republicans were talking about the power of the Red Wave after they dominated Tuesday’s general election with 25% of the voters pulling a straight GOP lever.

“When you see the trends happening in that regard, there’s no recovering that,” said Madison Mayor Bob Courtney, a Republican who will mostly likely seek a second term next year.

“You can’t fight it, you can’t beat it; that’s what you call Red Wave. They’re trying to classify that, and say there is no Red Wave, but there is,” said Jefferson County Republican Party Chair Pam Crozier.

With 10,003 residents voting in Tuesday’s election, 2,529 of that total voted a straight Republican ticket compared to just 850 voting straight Democrat. Overall voter turnout was 45.3%, down from four years ago when 54.1% went to the polls.

Jefferson County Prosecutor David Sutter was the lone Democrat elected in a county-wide race and noted he was fortunate to be running unopposed. “It would have been very tough to overcome that,” Sutter said, adding he appreciates the voter’s trust and support.

Sheriff candidate Tim Davis, the only other Democrat seeking county-wide office, was among those gathered Tuesday evening at the Spencer J. Schnaitter Jefferson County Democrat Headquarters on Main Street in Madison. He said strong Republican straight party voting was a big factor in his loss to Ben Flint. “You can’t overcome a 2,500 straight ticket vote,” Davis said. “You can’t do it — not in this county.”

Davis said it has become difficult for Democrats to compete in Jefferson County. “We try to (challenge the Republicans) but it’s hard to turn people out,” he said, noting the GOP now owns a position of strength that Democrats once held. “Twenty years ago this place was hopping. Heaven sakes you couldn’t get in the door — you couldn’t even get to the door. I can remember when I was a kid going out to the fairgrounds when the Democratic party had a fish fry and you couldn’t get near that place at 4 o’clock due to the people and now it’s gone and the party is in a turmoil.”

The strength of the Republicans gave confidence to Dwayne May in his first run for office for County Council District 4. “I really felt I was going to get swept in with the Red Wave to be honest with you,” he said, after garnering 68.3% of the vote in his win over Democrat John Hutchinson to join three Republican incumbents reelected to County Council.

May will be replacing longtime council member Judy Smith who decided not to seek reelection. “If I’m half the Council person that she’s been over the last 17 years then I will be doing well because she’s served Jefferson County very well,” May said. “ I look forward to serving the people of the fourth district. I feel like I just gained 8,000 neighbors.”

Incumbent Ray Denning defeated Libertarian Ronald Hoeferkamp in Council District 1 with 86.5% of the vote. “The last eight years our Council has worked very well together, and I think people have recognized that,” said Denning.

Incumbent Ray Black Jr. defeated Thomas Ray Sedam Sr. in Council District 3 with 67% of the vote. “I appreciate the voters support. By God’s grace, I’m here running because I was on death’s door about two years ago” with Idiopathic Pulmonary Fibrosis but after a double lung transplant he was able to seek and be reelected to a second term. “My dad was a two-time County Council member, and that’s what I was hoping to do to be a two-time County Council member myself, and I was able to achieve that.”

Incumbent Chris Shelton ran unopposed in District 2 for his third term after initially being elected through caucus in September of 2013. “I’m very thankful to be on Council again,” he said. “I feel as a Council we’ve been very successful in maintaining a good budget and making sure the obligations of the county are taken care of.”

More evidence to the strength of county Republicans was the defeat of three township trustee seats that had long been held by Democrats.

Crozier noted that when candidates began filing in January, “we looked in each area where that township is, and we looked for people we knew that represented the Republican party, and went and asked if they would step up and represent that township. And we didn’t have to ask very hard, and they said ‘Yes.’ I don’t think anyone had been asked, and we did.”

Republicans now have eight of the 10 township trustee positions with the only two Democrat trustees being Shannon Hamilton in Graham Township and Lucy Anderson in Hanover Township — both who were unopposed on Tuesday.

Democrats, however, will continue to have a strong presence on Hanover Town Council with Kenny Garrett, an incumbent, and Tim Buxton, a newcomer, winning the two council at-large positions by outpolling Republican Candice Goens. Also, Democrat incumbents Treva Shelton in District 1 and Debbie Kroger in District 3 were unopposed and will be back on the council.

Hanover Township Board, which was previously all Democrat, now has a Republican with Greg Sanders being the top vote-getter on the three-member board to join Democrat incumbents Laura Chitwood and Melvin Adams with incumbent Ronald Anderson falling short.

Meanwhile, Madison Township Board, previously all Republican, will now be joined by Democrat Marilyn Hutchinson who finished third behind Myron Eaglin and Jeff Rampy. Edward Stigall Jr., a Democrat, was the fourth place candidate for the board, failing to make the top three.

(Information for this story was also gathered by Mark Campbell)