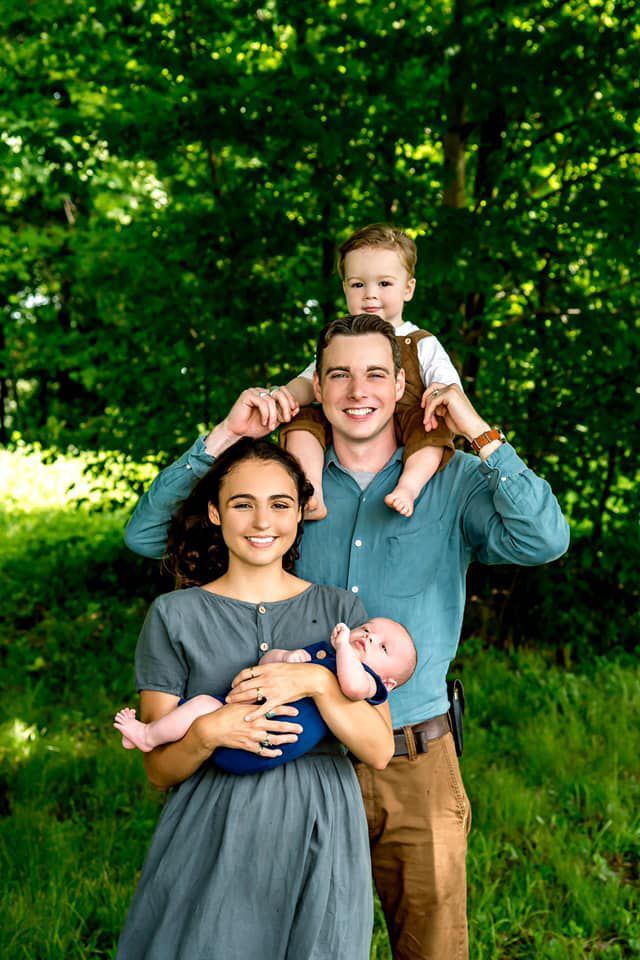 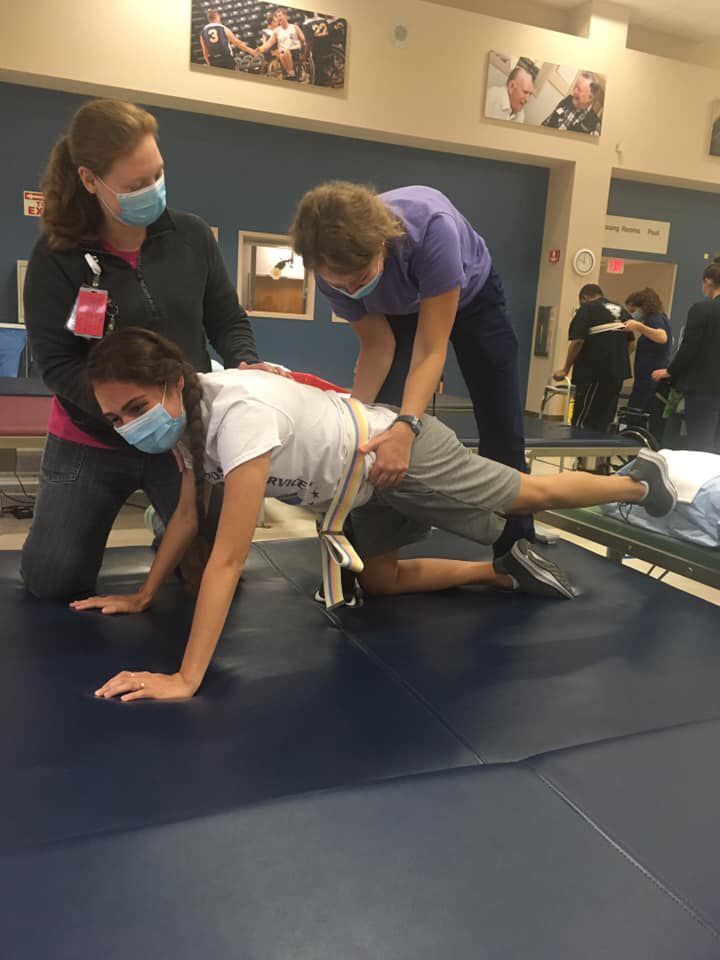 In rehab, Sarah works on relearning how to use and strengthening her body. 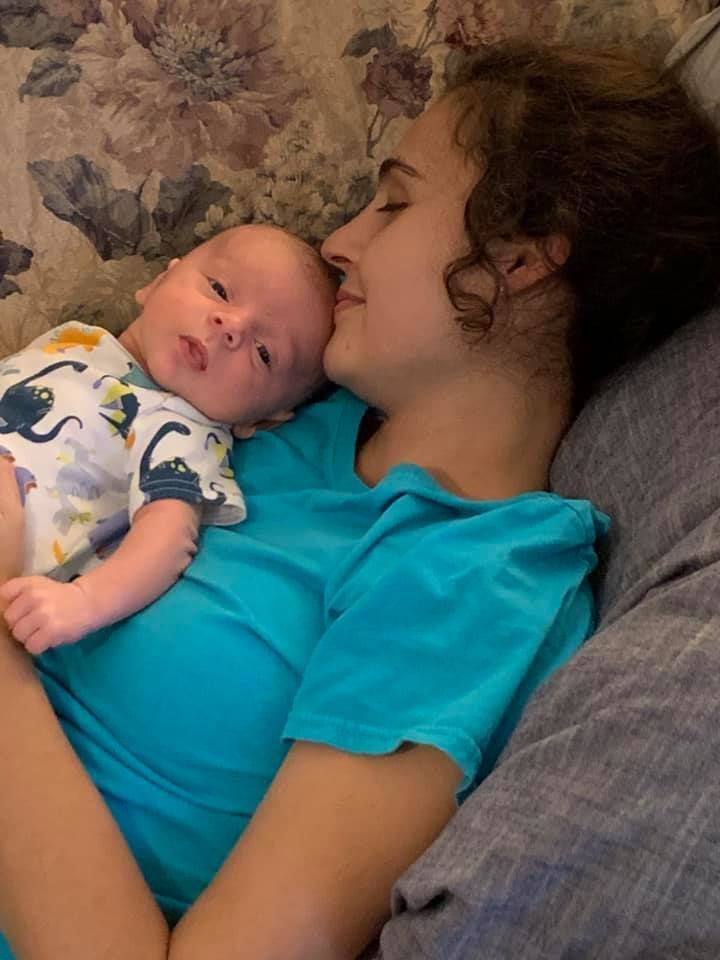 Sarah-Grace Richardson finally got to hold her newborn after returning home from the hospital. The last time she’d gotten to do so was two days after his birth, which was when she suffered her stroke and was rushed to the emergency room. COVID-19 protocols did not permit family visits.

In rehab, Sarah works on relearning how to use and strengthening her body.

Sarah-Grace Richardson finally got to hold her newborn after returning home from the hospital. The last time she’d gotten to do so was two days after his birth, which was when she suffered her stroke and was rushed to the emergency room. COVID-19 protocols did not permit family visits.

A Greensburg woman is a walking miracle with quite an inspiring story. Sarah-Grace Richardson celebrated her “Stroke-A-Versary” this April, telling her family she was going to go for a long walk and push some “chunky little boys” in swings. Those boys are her two sons, almost-three-year-old Bear and one-year-old Everett.

For a 25-year-old mom who was told a year ago she’d never walk again after suffering a stroke and brain bleeds, that is the PERFECT way to celebrate.

Sarah-Grace had just given birth to her second child on April 18 when, two days later, she woke up from a nap and couldn’t move the entire right side of her body.

She was rushed to the emergency room in a Greensburg hospital. A CT scan revealed she had multiple blood clots which prompted doctors to transfer her to IU Health Methodist Hospital, but by the time she arrived she could only move her left foot.

Sarah’s doctors told her that she’d had a stroke and that, sometimes, when a woman reaches the end of her pregnancy or during labor, she can experience a surge in hormones that causes blood clots to form, which then can cause a stroke. They weren’t sure if she would live.

Friends and family were praying for her recovery. Sarah remembers feeling sad, worrying about who would take care of her husband and two young sons, but she just kept thinking to herself, “God is good and He has a plan. If it’s His will for me to be healed, He will work miracles.”

And a miracle is exactly what she got.

After 15 days at IU Methodist, 10 of which were spent in the ICU, with only her right fingers and her left foot able to move, Sarah began physical, occupational and vision therapy, relearning how to do everything all over again. Even once she could walk, something as simple as changing the clothes on a baby doll left her exhausted, but she persevered.

“It was crazy how quickly I progressed in rehab,” Sarah had told Stephanie Watson at Web MD.

In May 2020, just over a month after her stroke, Sarah’s husband Thomas was finally able to bring her home and she spent a month in an outpatient program.

Now, Sarah is doing better than ever.

Sarah’s ulcerative colitis, which she was diagnosed with a month before her second pregnancy, was a major contributing factor in what happened to her. However, she has been in remission for her condition for several months.

This is the best she’s felt since before her stroke.

“I feel like Sarah again,” the mom of two said cheerily. “I have lots of energy. Everything works; my toes, my fingers, everything moves. I’m back to doing pretty much everything I did pre-stroke.”

She was especially thankful that she got to celebrate her son’s first birthday, happy she was even able to pick him up and hold him, things she almost lost the opportunity to do.

Her sons make her laugh and she says they are sweet, smart, fast and exhausting, but absolutely worth it.

Sarah believes with her whole heart that the opportunity to shepherd and disciple the little souls within her children is one of the greatest tasks that God has given her and her husband.

“It’s a big joy, but a big responsibility.”

Sarah defines herself as a homemaker and a mother. “That’s what I love to do. That’s what I want to do with my life.”

God uses her stroke and recovery to work in her heart, Sarah says. It helps her to stay motivated because “I almost lost the ability to do any of it.”

“The ordinary arts we practice every day at home are of more importance to the soul than their simplicity might suggest” is a quote Sarah lives by.

“I believe that I can wash the dishes and change diapers to glorify God.”

She embraces the quiet tasks like painting, baking, singing and relishes reading because her stroke caused her to temporarily lose the ability to move her right eye pass midline.

Not 11 months after her stroke, Sarah and her husband took a much-needed vacation to Sedona, AZ. She was able to hike and climb, experiencing the breathtaking beauty of Arizona and she thanked God every second because she was so close to being paralyzed and in a nursing home for the rest of her life — if she survived.

Sarah has shared her story at different churches and in different articles, which is something that makes her nervous for fear that people may think she is doing so to garner attention.

However, she doesn’t let that stop her, because “I have to remind myself this is an amazing miracle and you have got to share it.”