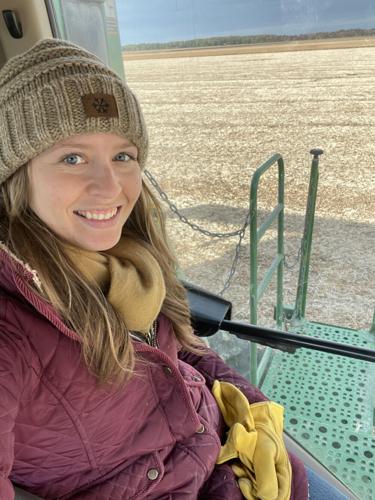 Plain Dealer & Sun lead reporter Kylan Higgs is pictured inside the combine of Jennings County resident Matt Branham as they harvested one of Branham’s cornfields during her ride along. 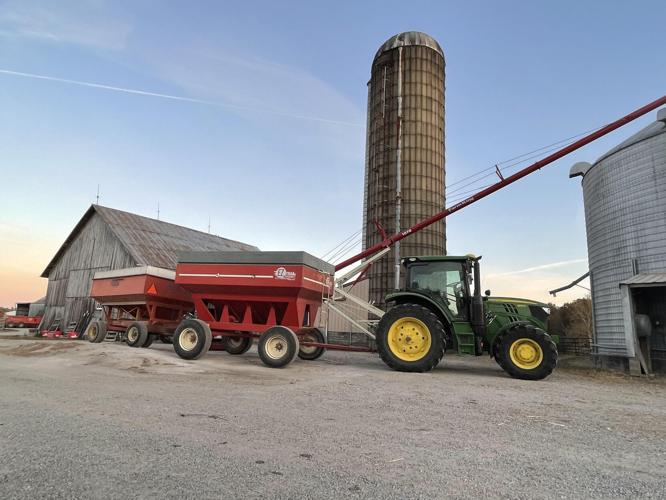 Augor wagons, pictured, are used to haul tons of corn kernels to and from the fields. 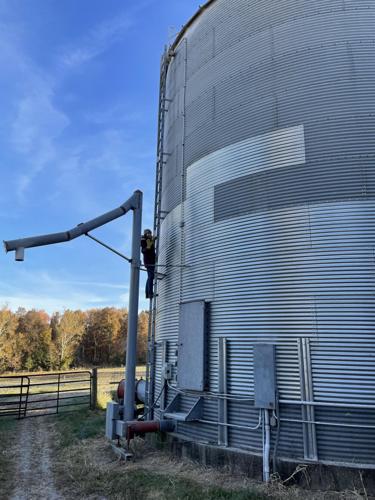 Higgs is pictured climbing up one of the Branhams’ grain bins to report how full of corn kernels the bin is. Higgs said later that, though she is not normally afraid of heights, this was the scariest thing she did during her farming “ride along” because the top is a lot higher than it looks. 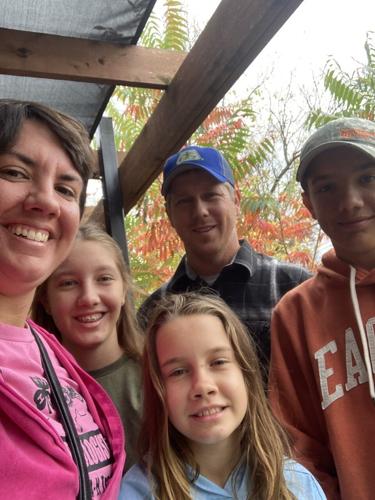 Matt Branham and his family are shown.

Plain Dealer & Sun lead reporter Kylan Higgs is pictured inside the combine of Jennings County resident Matt Branham as they harvested one of Branham’s cornfields during her ride along.

Augor wagons, pictured, are used to haul tons of corn kernels to and from the fields.

Higgs is pictured climbing up one of the Branhams’ grain bins to report how full of corn kernels the bin is. Higgs said later that, though she is not normally afraid of heights, this was the scariest thing she did during her farming “ride along” because the top is a lot higher than it looks.

Matt Branham and his family are shown.

Farming is the too-often unappreciated backbone of the world. Has it ever occurred to you what it takes in order for you to have that bowl of cereal this morning, or for you to add cheese and veggies to that burger you had for lunch?

Acres of cornfields, beans, wheat, apple orchards, vineyards, pastures full of cows, and much, much more are not just beautiful, but necessary. Without food, the human race could not survive. Which is why I have decided to make farming the focus of the latest installment of my Behind-the-Scenes series.

Jennings County is made up of 510 farms, as of the 2017 census, which takes up a total of 128,109 acres of land. According to the Indiana State Department of Agriculture, agriculture contributes an estimated $31.2 billion to Indiana’s economy and Indiana is the eighth largest agricultural exporter in the nation, exporting just over $4.6 billion in 2017.

My quest to highlight the unseen hard work of farmers brought me to the Branham farm at 8 a.m. on October 20, right in the middle of harvest season. To my great relief, I did not have to arrive at 6:30 a.m. as we — myself and my host, Matt Branham — had initially agreed. When I had called the day before to confirm my visit, Matt said 6:30 to 8 is when he feeds cattle and gets ready to go to the field. Harvesting doesn’t start as early as 6:30 a.m. because his crops are usually still wet at that time.

Nonetheless, it was still frigid and multiple layers were required to be outside. When I arrived, Matt’s wife, Nicole, and 12-year-old son, Luke, met me to let me know Matt had had to rush out to check on a cow that had recently given birth. They invited me to watch Luke feed his own cow that he was raising for his 4-H project. Nicole wasn’t sure how comfortable I would be around large animals, and I told her I’d grown up riding horses, running barefoot through the country, and was in 4-H since I was five-years-old, so farm animals and a little mud has never bothered me.

However, my family does not farm, which is a completely different lifestyle to simply having horses. Not only is it a lifestyle, but for many families, it’s also a legacy.

Matt’s great-grandparents (his paternal grandmother’s parents) were the first, he remembers, to be on the homestead which is located on the northwestern edge of Lovett Township in Jennings County. Next, his grandpa, and his grandpa’s two brothers-in-law, farmed the land. Matt’s father took over for them in the 70s by buying his uncle’s portion, and share cropping the other two-thirds for Matt’s grandpa and other great uncle.

They farm 600 acres of corn, soybeans, and wheat and also manage approximately 70 beef cows and raise the calves.

“I like the variation in work,” said Matt. “Most every day is different in some way. I enjoy operating equipment and seeing hard work pay off.”

In addition to their son, Luke, Matt and his wife also have two daughters, 14-year-old Cora and 10-year-old Amy. Nicole homeschools the children and volunteers with the Purdue Extension and 4-H. They are also all active in their church, Peace Lutheran in Seymour.

For my part, Matt graciously allowed me to join him in his tractor as he hauled gravity wagons of corn kernels to be emptied into grain bins, as well as in his combine as he harvested one of his cornfields in the Weston Bottoms not far from Hayden. He even had me climb to the top of a grain bin (which are deceptively taller than they look) to check to see how full the bin was.

As I asked Matt questions about his daily routine, it became increasingly obvious to me how intelligent he is, which is why it is unfathomable to me that farmers have been stereotypically thought of as “dumb hillbillies,” uneducated and out of touch with the 21st century. That could not be farther from the truth.

Farming crops takes tremendous amounts of knowledge in weather, engineering, science and mathematics, among other important subjects. According to Matt, farming is a very technical career. The new technology in farming is crucial to being successful. Farmers have to learn about agronomy, chemistry, computers, equipment maintenance, marketing, public relations, and animal sciences.

Advances in technology and farming practices have helped farmers become much more productive, growing crops efficiently in areas most suitable for agricultural production. Without these advances, far more land would need to be cultivated to produce the food we need today.

Farmers use math to decide what tractors and equipment to purchase and make payments, keep track of things like how much their livestock weighs, and their crop yield per acre, and more.

When I asked Matt what he feels is the most common misconception about farmers, he said “’That farmers don’t care about the environment or their livestock.’ Farmers are personally invested in making sure the ground is well taken care of to be able to be there for years and years to come. We also want our animals to be safe and healthy. It is our full-time job to take care of our animals and the environment.”

He added that the most difficult part of farming is the stress of all of the unknowns. A farmer invests so much into planting, growing, and taking care of a crop, knowing even if he does everything right, the wrong weather can undo all of the work. He said “Farmers are always needing to wait for the weather conditions to be correct for planting, spraying, and harvesting and then be able to go all in ‘til the job is finished. Farming is now a global market; something on the other side of the world — weather, politics, war — can drastically change our pricing for both inputs and crop sales overnight.”

I was blown away by all the information Matt was able to give me regarding farming. I can’t tell you how many times I nodded dumbly as he tried to explain the math and science that goes into maintaining livestock, crops and his livelihood as a farmer.

While farming is a 24/7 job — as opposed to most people’s 9-to-5 job — a job that is grueling, uncomfortable, uncertain, and tough, how can anything else compare to working in the great outdoors, knowing that, without your daily hard work and dedication, society could not survive?

So, to all those who have dedicated their lives to providing food for me and my loved ones, I offer you my sincere gratitude and wish you a fruitful harvest every year. For my readers, as you sit down to enjoy your Thanksgiving feast with your family this week, make sure you, too, offer your thanks to the farmers all over the world that made it possible for you to enjoy each and every delicious bite.