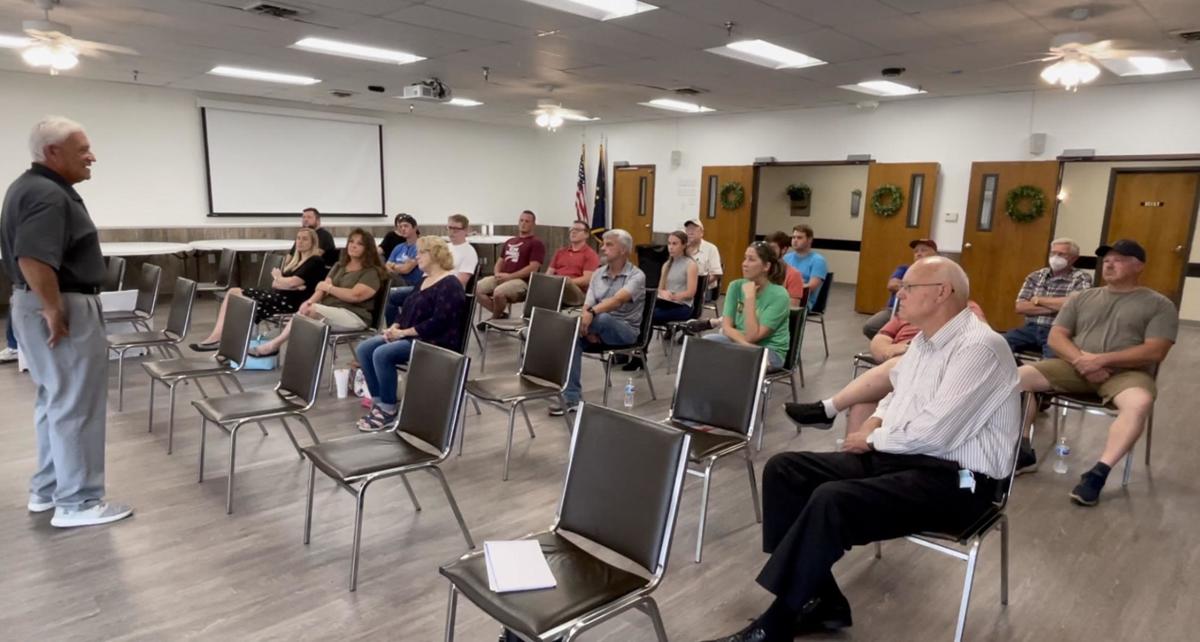 Tim Hunt of HWC Engineering addresses the crowd of Walnut Street business owners and residents who had concerns regarding the reconstruction of the heavily trafficked roadway. 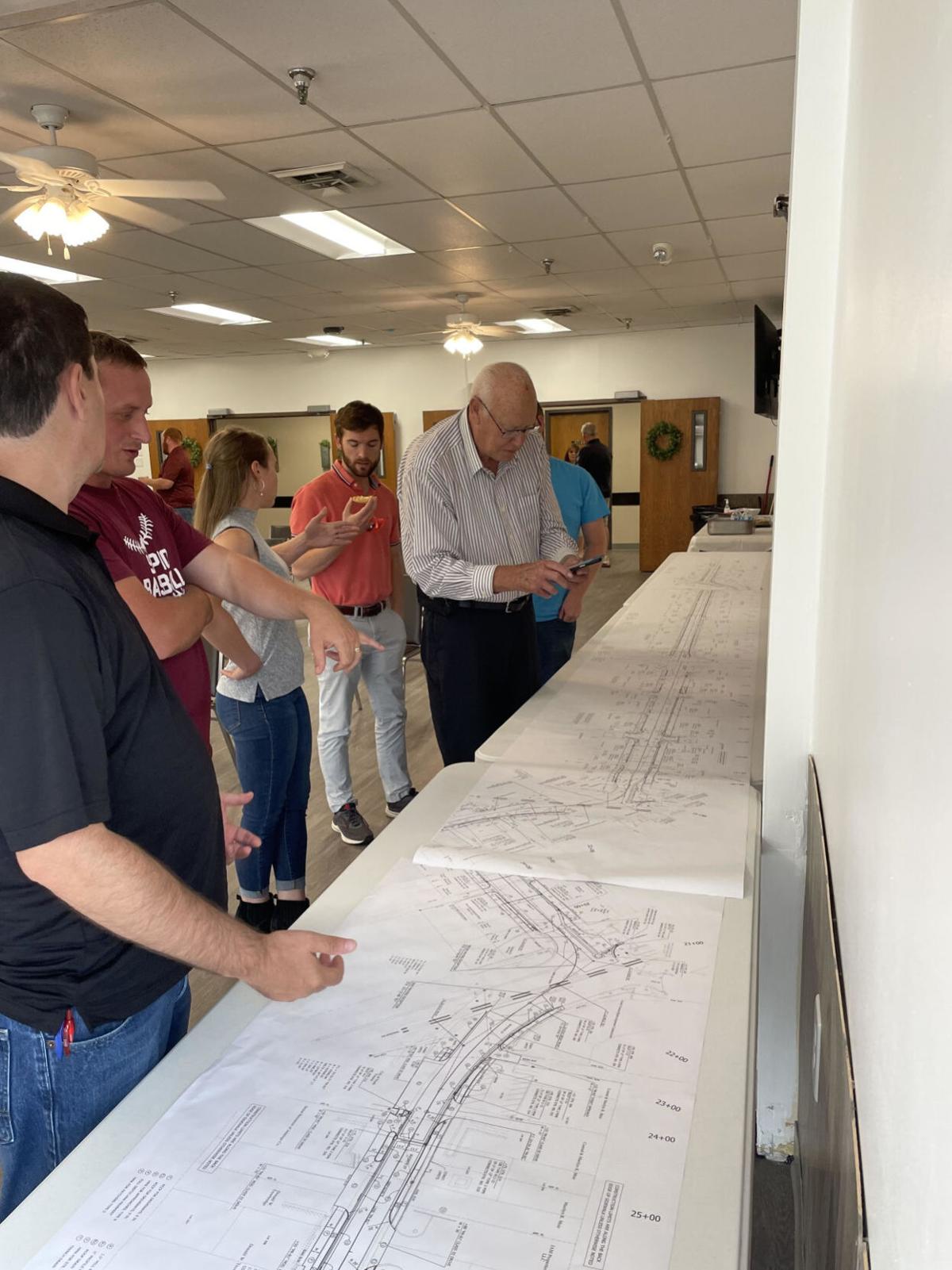 Jennings County residents look over the printed graphics that detailed every phase of the reconstruction project. 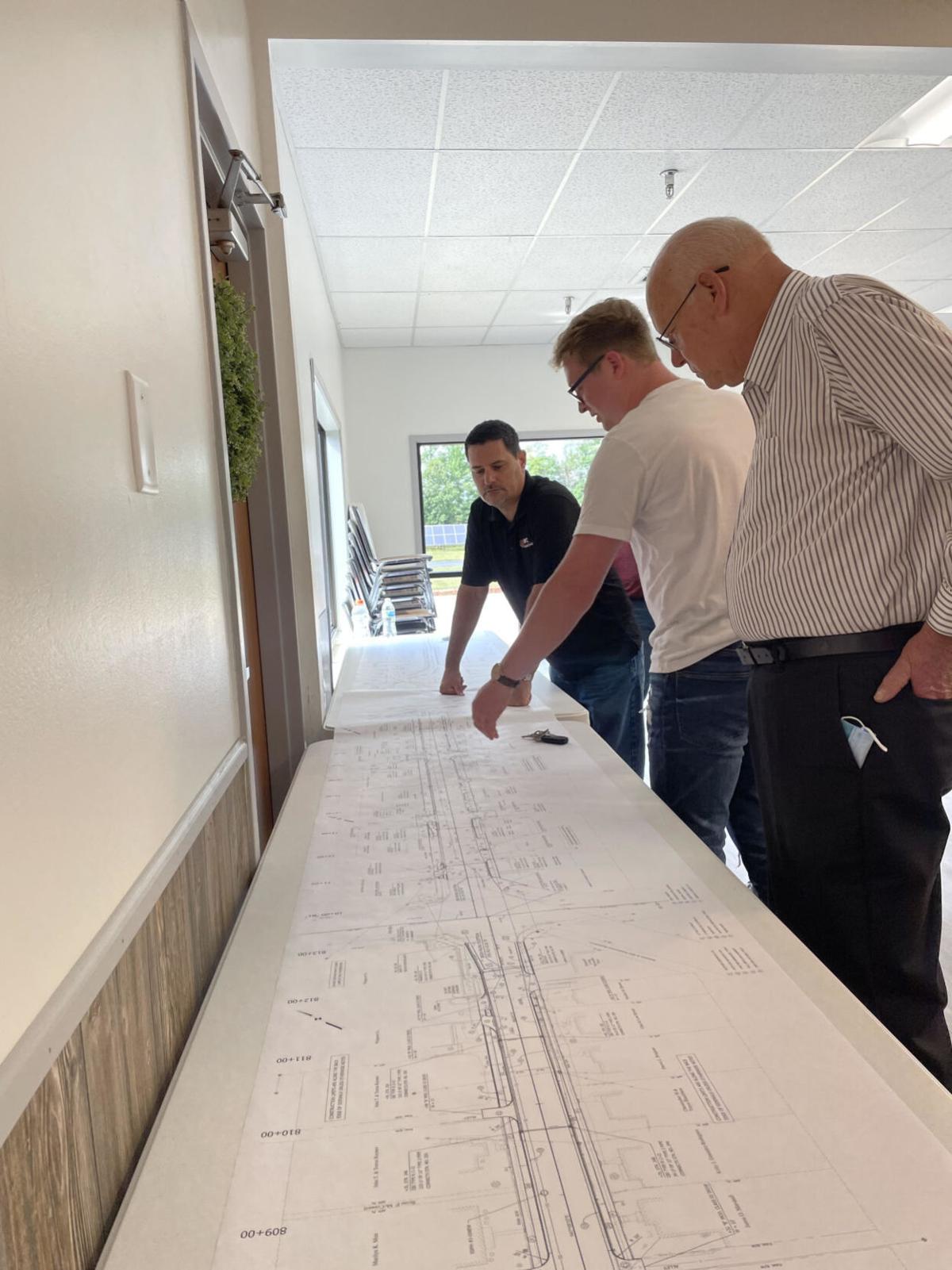 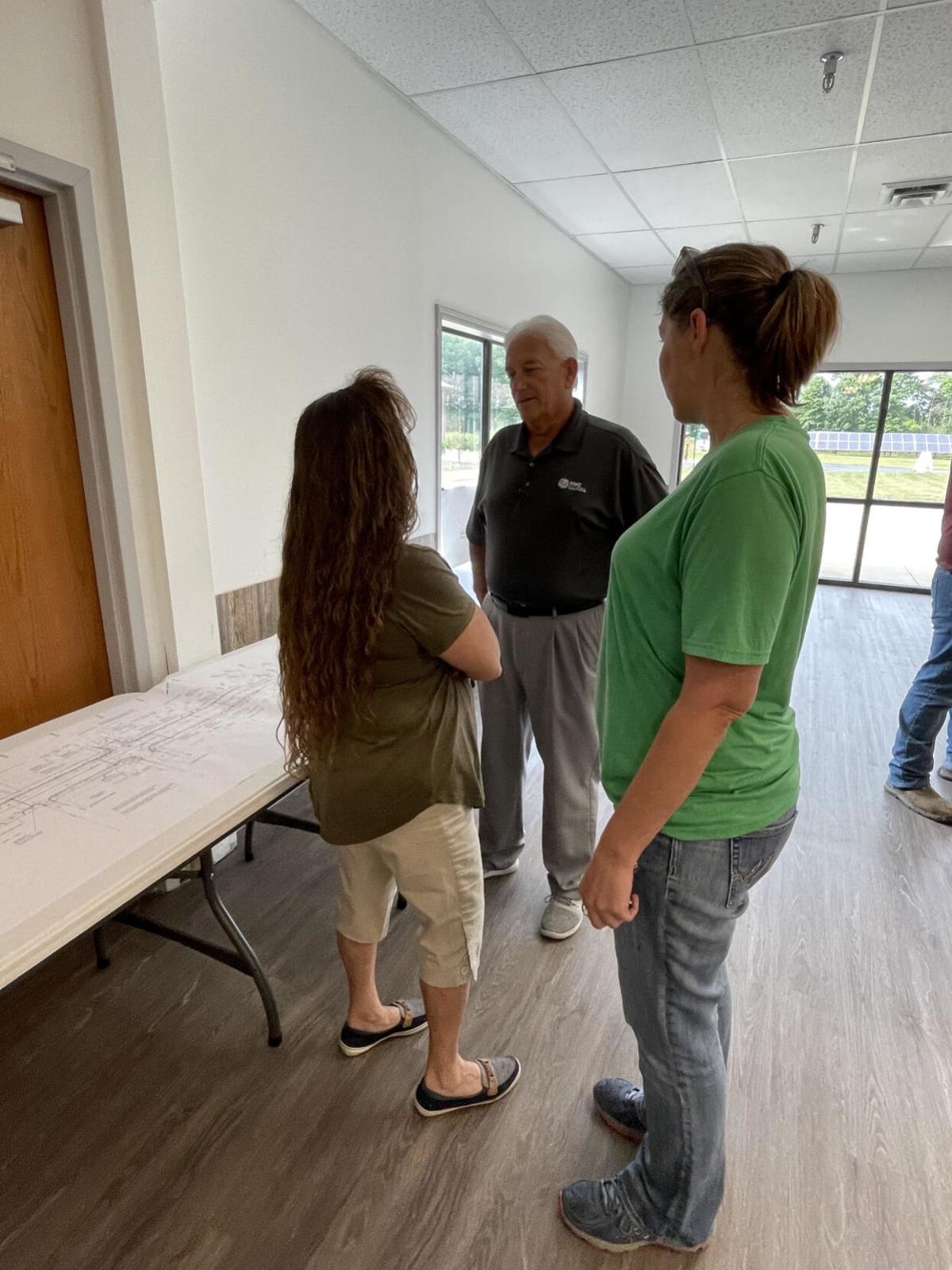 Walnut Street business owners had many concerns about potential business loss as a result of the project. Tim Hunt with HWC Engineering puts business owners Colleen Kirchner (left) and Shae Everage (right) at ease during the August 18 meeting. 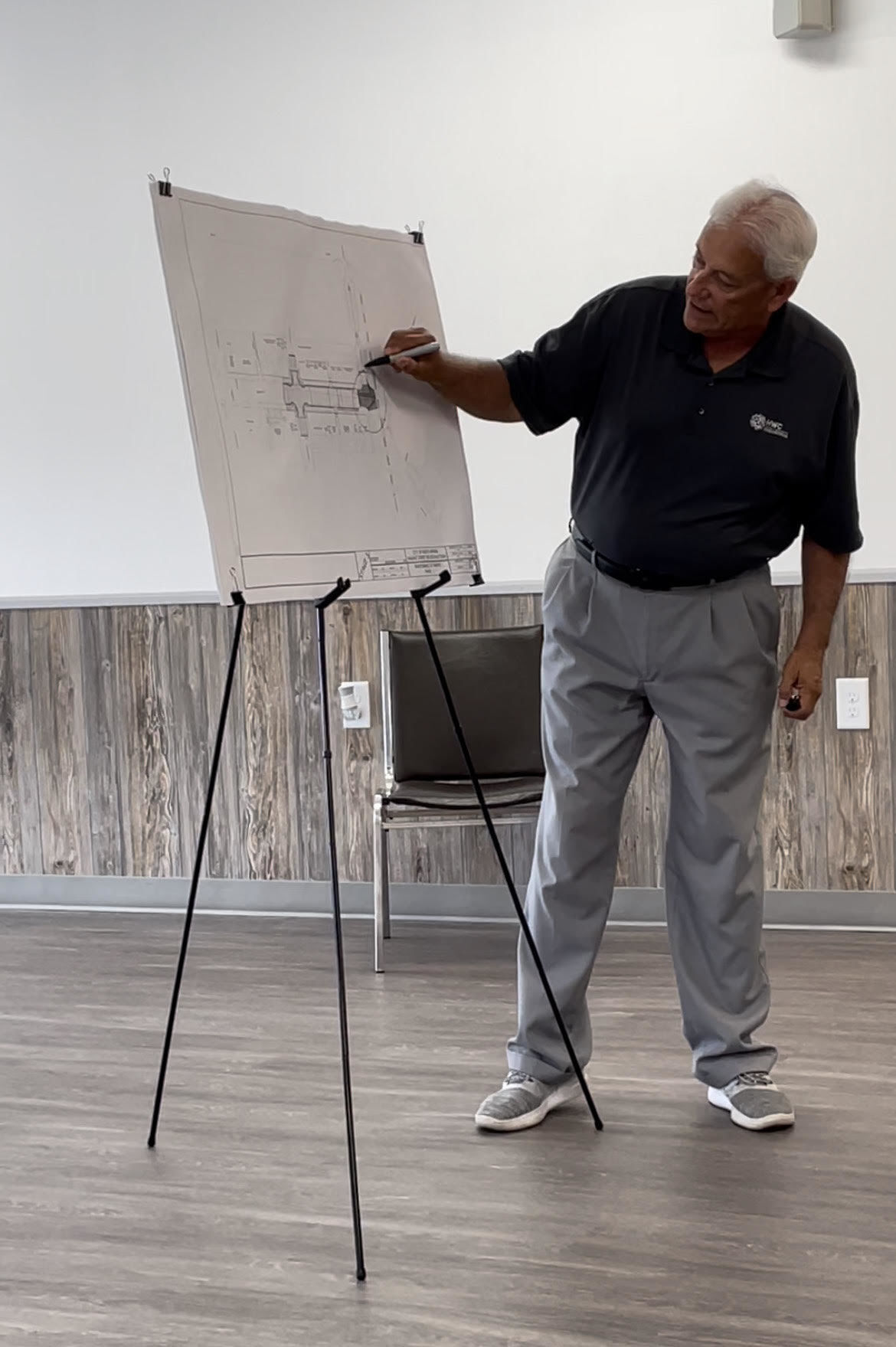 Tim Hunt goes over the details of each phase of the reconstruction project. 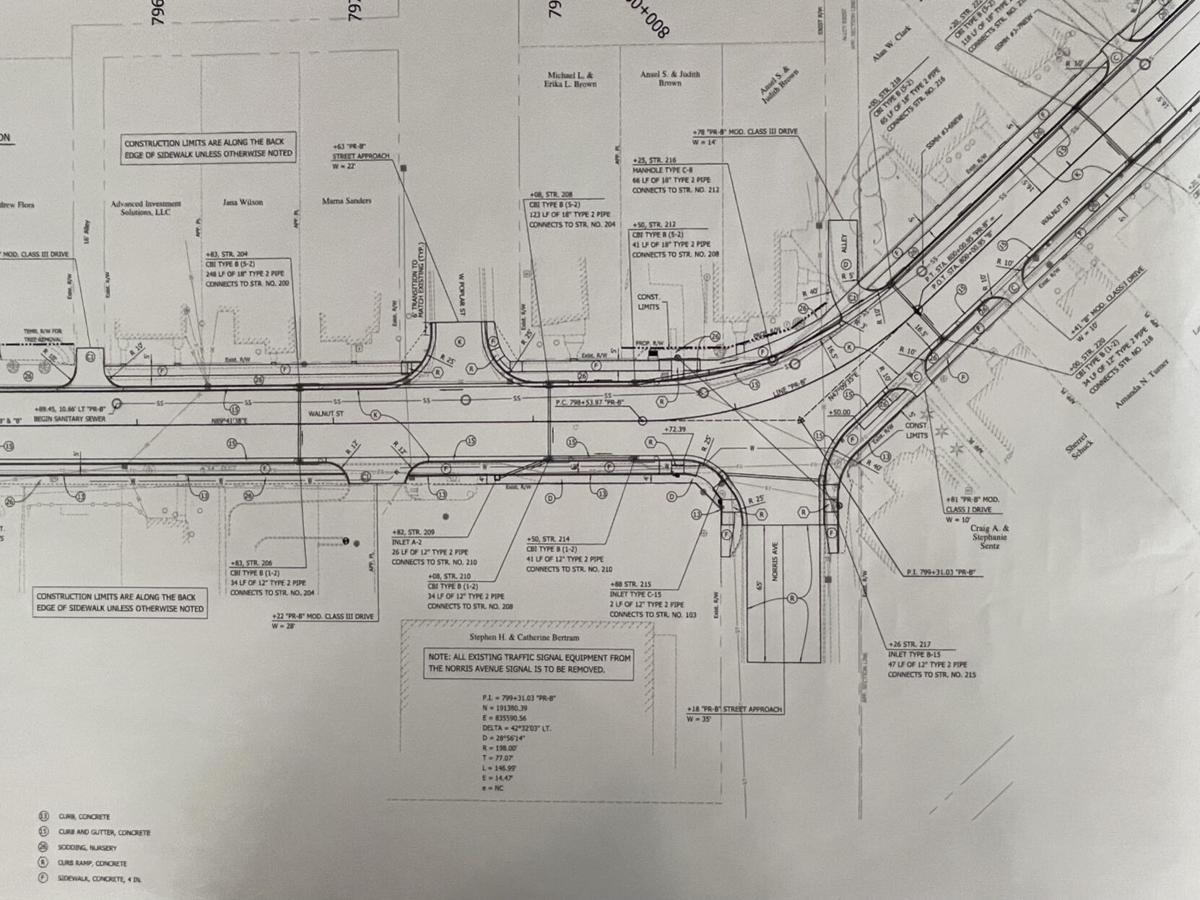 Tim Hunt of HWC Engineering addresses the crowd of Walnut Street business owners and residents who had concerns regarding the reconstruction of the heavily trafficked roadway.

Jennings County residents look over the printed graphics that detailed every phase of the reconstruction project.

Walnut Street business owners had many concerns about potential business loss as a result of the project. Tim Hunt with HWC Engineering puts business owners Colleen Kirchner (left) and Shae Everage (right) at ease during the August 18 meeting.

Tim Hunt goes over the details of each phase of the reconstruction project.

The objective of North Vernon’s Walnut Street reconstruction project is to totally replace all the water and sewer lines and connections, install a new storm sewer to keep downtown from flooding, reconstruct all roadway surfaces and update the sidewalks to make them ADA compliant. According to Tim Hunt with HWC Engineering, some of the current sanitary and storm water infrastructure is between 80 and 100-years-old. The construction route will be about one mile long.

A project of this scale is estimated to take 1.5-2 years to complete with eight phases in total, each expected to last between 1-3 months for each phase. Most public inquiries during the August 18 public Q&A meeting occurred during the overview of Phase 1, which focuses on a section of Walnut Street where a majority of businesses with minimal public access points are located, and Phase 6, which focuses on the Norris Avenue intersection.

The first phase of the project actually has two parts: Phase 1A and Phase 1. For Phase 1A, the contractor will make the connections to the existing storm and sanitary sewer lines underneath the intersection at N Madison Avenue, Walnut Street and Buckeye Street to facilitate the construction of the new mains progressing west on Walnut Street.

According to Hunt, in order to start the new sewer line and be able to move upward along the construction route, they will need to make a major connection into an existing manhole and an existing storm sewer and flow into an old karst system that runs down the railroad, behind the old Regal Rugs building and opens up in the ditch at Tripton Park.

It’s thought this phase will start early in 2022 (January or March, depending on weather) and last for 2-3 weeks. Once it is complete, Phase 1 will begin and spans from the Walnut Street intersection to just past Jackson Street.

Hunt revealed they are planning to remove the stoplights at the Jackson-Walnut intersection and will be installing a two-way stop and bumps outs.

Resident George Prather questioned this decision, and Hunt responded that it was for better traffic flow, removing the need for traffic light maintenance and to provide protection to parked cars. Prather suggested a four-way stop would be best and safer for pedestrians.

Hunt said they’re not opposed to a four-way stop, but Walnut Street has 10-times the traffic compared to Jackson Street. Since Walnut Street is no longer apart of Hwy 50 and is not on the National Truck Route, the amount of semi-trucks has been greatly reduced.

Multiple businesses run out of buildings located in this section of the construction route. The contractor will be required to proceed while keeping businesses open. Therefore, they will have to have a plan in place before tearing up sidewalks to guarantee that businesses won’t be affected.

Creative Design Stylin-Center owner Colleen Kirchner worries that the elderly ladies that come to her salon won’t be able to access her business once construction begins, but has been assured they will be able to utilize secondary entrances.

“I’ll just do what I have to do,” Kirchner said.

“I’m ready to just do it,” said Shae Everage, owner of Perfect Day Cafe, located across the street from Creative Design.

Resident Daniel Smith inquired as to the city parking lot next to Ron’s Auto Services on N Jackson Street, located directly behind Smith’s building on the corner of 162 E Walnut Street. Smith noted that the lot’s direction lines are almost entirely faded. When Phase 1 starts, most people will choose to park there to get to the businesses in the construction zone, and Smith fears that without proper guidelines, the lot will not be utilized properly.

Hunt responded that their desire is to bid the Jackson Street section (North and South one block) with the Walnut Street project to capture additional savings with the contractor already bidding a substantial project in the city, thus reducing cost of mobilization, equipment, and labor. The contractor with the lowest responsible bid will dictate when that work can be completed.

Hunt continued on to Phase 2, from Jackson to State Street. This section will be physically longer than Phase 1, but won’t take as long because there aren’t as many “nuances” as Hunt puts it.

Drivers will not be able to pull into Walnut Street to access any businesses from Jackson to State Street. You will have to use backroads and side streets like E Main Street, Chestnut Street and Jennings Street to park.

The city Utilities office will have limited access, but Jackson Street can be used at this time to make park and walk in order to make payments or use their alley drop off box.

There is a storm sewer drain line right in the CVS area. It runs up to E Main Street and flows east. Hunt says that is the culprit of most of the downtown flooding because when it rains, it collects most of the west side of the City and flows into a single man hole. They’ve intercepted and enlarged that manhole and 60% of the flow will now travel down their new storm sewer. The system is similar to the one that was built into Buckeye Street.

Indiana Department of Transportation (INDOT) would not allow for intersection at Walnut and State Street to be opened up for construction. Therefore, Hunt’s team decided to do is a slip-lining of the existing sanitary sewer and structural repair of manholes as well as a water line bore under State Street. Doing so will allow the contractor to keep some lanes open as opposed to shutting the entire intersection down, and only on the weekends.

Phase 4: State Street to Gum StreetThis phase and Phase 5 will have the least amount of public disruption, as this is a majority residential area that all have side street and back road access points. Anyone trying to access Walgreens will have to use the West Main Street or State Street entryways.

This phase is similar to Phase 4. No one will be able to turn right on Norris Avenue; you will have to turn left and use side streets.

Hunt noted that this section will take a little longer because the sewer and storm lines split in this area. The old lines will be filled and taken out of service once the new lines are put in.

An alleyway on the north side of Walnut Street just off the Norris Avenue intersection that runs between 156 and 150 W Walnut Street will be changed to a one-way entrance.

It’s likely the project will halt after Phase 4 or 5 depending on weather and start up again in 2023.

Hunt revealed this phase is the one that concerns him the most. He mentioned that 80% of the Jennings County School Corporation buses use this intersection. Hunt’s team met with Superintendent Teresa Brown and her transportation department and they agreed to conduct this phase in the summer months of 2023 when school is not in session to limit any inconvenience to the schools.

Hunt referenced a manhole that has been deteriorating for years located at this intersection in the turn lane. Part of this phase includes moving that manhole to another area of the intersection, out of the turn lane and away from the wheel path of any vehicles.

A resident who lives next to Papa John’s is concerned about the increased traffic flow in the alleyway that runs behind the pizza restaurant and Hall’s Heating & Air Conditioning. He asked if they could block that alley off.

Hunt said they will be detouring vehicles down Platter Drive east of Norris Avenue in the hopes of minimizing the excess flow. City Councilman Trent Wisner chimed in that they had spoken with the city police about monitoring that area. The resident suggested installing speed bumps to keep speed down. Hunt was unable to give a definitive answer, citing that “if you improve it, they’ll want to use it.”

He also added that, once the Walnut Street project is finished, they hope to add some the more heavily trafficked side roads like West Poplar Street, Gum Street and Oakwood Avenue to Jennings County’s Community Crossings grant project.

This phase will also affect the school system. The goal would be to also conduct the full-depth reconstruction of this phase during the summer months as well, but that might not be possible. If so, buses will have to re-route down Hayden Pike in order to get to the middle and high schools as well as North Vernon Elementary.

This phase will be done at the discretion of the contractor. It will likely only be a one-lane access in order to install a storm sewer, additional driver entrances, and a pavement overlay.