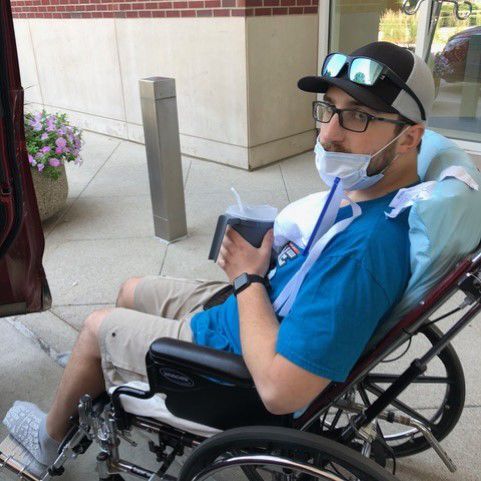 A hospital aid helps Morgan Webster with his rehab after surgery.

A hospital aid helps Morgan Webster with his rehab after surgery.

8,696. For 8,696 days, I was completely normal. I grew up in a normal house, with a normal life. I lived under a spotlight. My mother was a teacher in the elementary school that I attended from kindergarten through sixth grade. My dad had been a police officer since before I was born, and when I was in fourth grade, he was promoted to the Chief. I grew up with normal friends and went to a normal church, for 8,696 days.

Like most others, I grew up with some very minor health issues. At a young age, I was diagnosed with asthma, which led me to seeing a pulmonologist at Riley Hospital for Children until I was six. I eventually “grew out” of my asthma, but still suffered from some seasonal allergies and allergies to dust and cats. During the summer, ear infections were commonplace, as I spent lots of time in my grandma’s pool. Other than that, I was normal.

Things began to change three months after my 23rd birthday. I woke up after a night of sleep, and noticed my bed sheets were wet. I was extremely confused, as this was something that hadn’t happened since I was extremely young. I jotted it down as pure exhaustion and sleeping heavily, and moved on with my life. Then it happened a second time, and then a third time.

Was this my life now?

After a month of dealing with this, and now noticing kidney pain, I decided, with pressure from my family and girlfriend, to see a new doctor.

I began seeing a new doctor in Seymour, and described all the issues I had been having. The doctor listened with intrigue, and began the work-up. The initial diagnosis was hypothyroidism, a condition in which your thyroid gland doesn’t produce enough hormones, and can throw many different parts of your body out of whack. I was prescribed a medication to help with this new condition and I would follow up in two months. I went on with my life, thinking that soon, I would be back to normal.

It was February 2020, and it was time for my follow up appointment. Over the course of two months, nothing had changed. Nothing. I told the doctor that I felt the same, with the exception that my body had become so used to the kidney pain that I didn’t notice it anymore. The doctor boosted my dosage, thinking that a higher dosage would fix the issue, and I was sent on my way. This time, we would follow up in three months. The optimistic side of me thought the doctor was right, that it would work. The pessimist was planning on wearing male diapers for the rest of my life, which was getting less and less enjoyable, and strayed farther and farther from normal.

The beginning of May, I am still experiencing the symptoms, and it is time to take this into my own hands. I set up a phone appointment with my doctor, and relay that nothing is changing, and in fact, it is getting worse. The doctor decides to prescribe me a new medicine that will help relax my bladder muscle, and therefore make the incontinence less. Also, I am referred to a urologist that I will see at the beginning of June. I wouldn’t make it that long.

Every night, I have started feeling more and more run down. I am officially having my first COVID scare. Every day I feel worse. Without any respiratory issues, I felt no need to get tested for COVID. It was during this week that my girlfriend sat down with me and began crying and said the words, “I feel like you are dying”. Unbeknownst to either of us, I was getting closer and closer to that being true. Something had to change.

I reached out to a family friend that was an ER doctor, and sent her my labs. She sent a message to my girlfriend regarding labs I had nearly six months prior saying, “Does Morgan know he has early stage kidney failure?”

Of course, I didn’t. I was shocked. I called my doctor’s office the evening of May 14, and requested labs be drawn that evening. I made the trip to Seymour, and back to Tailfeather’s where we were having a socially-distanced birthday celebration for my uncle. And then my phone began ringing; it was a Seymour area code. I walked away from everyone and answered the call.

“Morgan, we are going to admit you through the ER tonight and we need you to get here as soon as possible,” the doctor said as my heart dropped. “Two of your kidney labs came back very critical.”

These two labs were my creatinine and my eGFR. Creatinine shows how much creatine your kidneys filter into your urine. A normal lab value is 0.6-1.2 mg/dl. eGFR stands for estimated glomerular filtration rate is the best value to show how well your kidneys are functioning. My levels that evening were 10.57 and 6 respectively. As I was rushed to the hospital by my parents and girlfriend, I was in end-stage kidney failure.

I got to the ER, and after a CT scan of my abdominal region, it was found that my bladder was full, so much so that it was back-flowing into my kidneys. After putting a catheter in, I watched liters and liters flow out of me, and by the time I was moved to my inpatient room, I had lost 10 pounds. Now the scary part had begun. I was alone. COVID-19 protocols allowed no visitors. I was initially expected to be there over the weekend. I figured it wouldn’t be too hard to make it three days without seeing anyone.

As the days moved on, my lab values slowly got better. I was updating family all the time it felt like. Monday came, and the new expected discharge was maybe Wednesday or Thursday, and spoiler alert, it wouldn’t be then either. Thursday was the big day of my MRI, as the doctors began expecting this was a neurological issue. They were right and the results were a lot to take in.

The hospitalist came in the room and began explaining a condition called Spina Bifida Occulta. This rare condition happens when a part of the spine doesn’t fully form during pregnancy. I was also diagnosed with Tethered Cord Syndrome, where the spinal cord tethers to the spine, causing tension and possible nerve damage. With this new information, all of the doctors had the gears clicking to figure out what had happened. Both of these conditions are ones you are born with but can present symptoms at any point in life. The nerves in my spinal cord that relayed the message to the bladder to empty had been damaged, and had led to the incontinence and kidney damage. The next step was to find a neurosurgeon that could fix this problem.

I was sent to Dr. Andrew Jea, the chief of neurosurgery at Riley Hospital for Children. He talked me over two different surgery options; one that would be less invasive, but may have to be redone in a few years, or one that was very invasive, but would only be one surgery. I chose the more invasive option and my surgery was scheduled for June 15, nearly a month to the day of when it all started.

I went into a surgery called spinal column shortening. During this surgery, in order to release the tension on the spinal cord, the surgeon takes out vertebrae, in my case the L1, and uses rods to fuse the spine in the spot of the missing vertebrae. I still sometimes think the worst part of the surgery was becoming about an inch shorter. I stayed at Riley for five days, learning how to walk again, and having to learn to use an intermittent catheter.

My journey was long, and left lifelong impacts that I never thought I would have. For starters, I have a gnarly scar going down my back and I’m 5’7 now. I still have chronic kidney disease, and while my kidneys are much more stable, they may never be back to where they should be for a normal 24-year-old. The biggest change however is the fact that three times a day, I have to use a straight catheter to make sure that my bladder is fully empty, as in recent tests, it looks like the nerve that works my bladder has been damaged beyond repair.

The more and more I look back on those 8,696 days of being normal, the less upset I am about my new normal. I went through a few months that I wouldn’t wish upon anyone, but it has made me who I am. A new normal. A new Morgan.