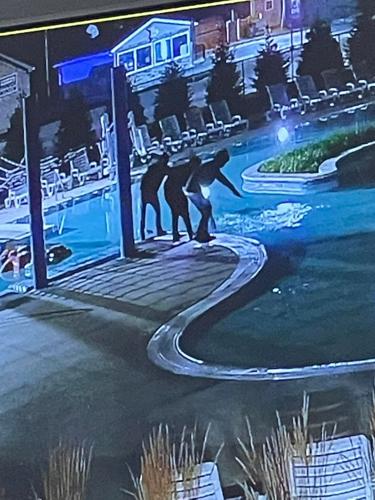 Pictured is the screenshot from the security camera footage at the city pool as the trespassers poured motor oil into the water. 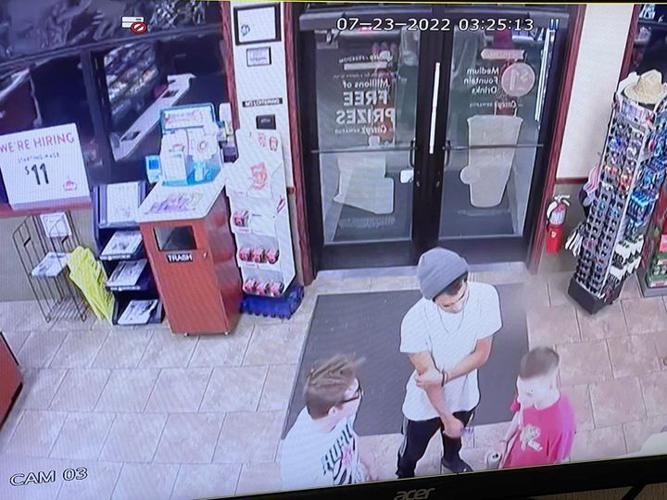 Above left: The suspects were caught on camera purchasing the items they used to vandalize the city pool. Above right: Pictured is the screenshot from the security camera footage at the city pool as the trespassers poured motor oil into the water.

Pictured is the screenshot from the security camera footage at the city pool as the trespassers poured motor oil into the water.

Above left: The suspects were caught on camera purchasing the items they used to vandalize the city pool. Above right: Pictured is the screenshot from the security camera footage at the city pool as the trespassers poured motor oil into the water.

City police have identified four persons of interest regarding two cases of vandalism against the North Vernon City Pool that occurred last week.

At approximately 4 a.m. Saturday morning on July 23, security cameras at the city pool captured three androgynous figures climb over the chainlink fence surrounding the pool on the south side of the property parallel to Franklin Street. The trespassers proceeded to empty approximately two quarts of motor oil into the water. They poured cat litter on top of the oil and tossed the empty oil containers into the water before leaving the scene.

Likely unbeknownst to the vandals, pouring the litter onto the oil diminished the amount of damage they were able to cause, as cat litter is an absorbent and subsequently soaked up 90% of the oil before it sunk to the bottom of the pool, according to Chad Speer, director of North Vernon Parks and Recreation. This made it easier to clean up once pool staff discovered the crime later Saturday morning at 11 a.m. Water and oil also famously do not mix, another factor in the pool’s favor.

Another incident of vandalism occurred a few days prior when produce such as pineapple, eggs, potatoes, Oreos and other food items were thrown into the pool. At this time, little information has been released about this particular incident and it has not been confirmed if the two cases are related.

“It probably would’ve been a disaster,” Speer said of Saturday’s vandalism. The city pool uses a media filter that is designed to remove dirt, sunscreen residue and other debris that naturally contaminates the water when people swim in it. According to Speer, it takes five hours to turn over, which means all 90,000 gallons of water have run through the filter. Therefore, when the crime was discovered at 11 a.m., the filter was already halfway through another turn over cycle.

The city would have had to pay to have the pool drained and refilled if the litter had not prevented the oil from spreading, and then wait an estimated two weeks in order to get the new water tested to make sure it was safe to swim in. If that had been the case, Speer said they would have had to shut down for the rest of season, costing Parks and Rec anywhere between $14,000 and $20,000 in revenue.

Fortunately, the pool was only forced to close down Saturday afternoon to allow staff to clean the litter out of the pool and change the filters and media.

Perlite media is the material that filters the dirt out of the water and is a new and more cost effective option compared to the more familiar sand filters, Speer said. To replace the media, pool staff has to drain the defender system, which is the filter, fill with water, drain and repeat until the water is clear. Usually this takes about 10 repetitions, according to Speer, but on Saturday it took approximately 40 repetitions. Once water is clear, the system is drained again, the perlite media is added to the filter though a vacuum system and water is added to the defender filter system.

The oil spill was reported to the North Vernon Police Department (NVPD) and an investigation ensued, headed by K-9 Officer Shane Trepanier. The empty containers of motor oil were recovered from the water and were discovered to be Casey’s General Store’s brand of motor oil. Video footage from Casey’s General Store revealed three young adult males purchasing litter and the motor oil approximately 35 minutes before the vandalism took place.

Screenshots of the footage from the pool and the gas station were shared on the NVPD Facebook page and, with help from the public, four persons of interest have been identified with possible connection to the crime. Two were interviewed on Monday, one of whom was a minor. The minor, who has not been arrested at this time, denied involvement in the oil spill but admitted to throwing the food into the pool days prior to the oil spill.

The other male who was interviewed, Keegan Barnes, 19, of North Vernon, was arrested for criminal trespass — level 6 felony and criminal mischief.

The investigation continues into the involvement of the remaining two persons of interest.