Jimmy Shane steers the U-1 Miss HomeStreet/Miss Madison down the frontstretch during the final heat of the APBA Gold Cup on Sunday in Madison. 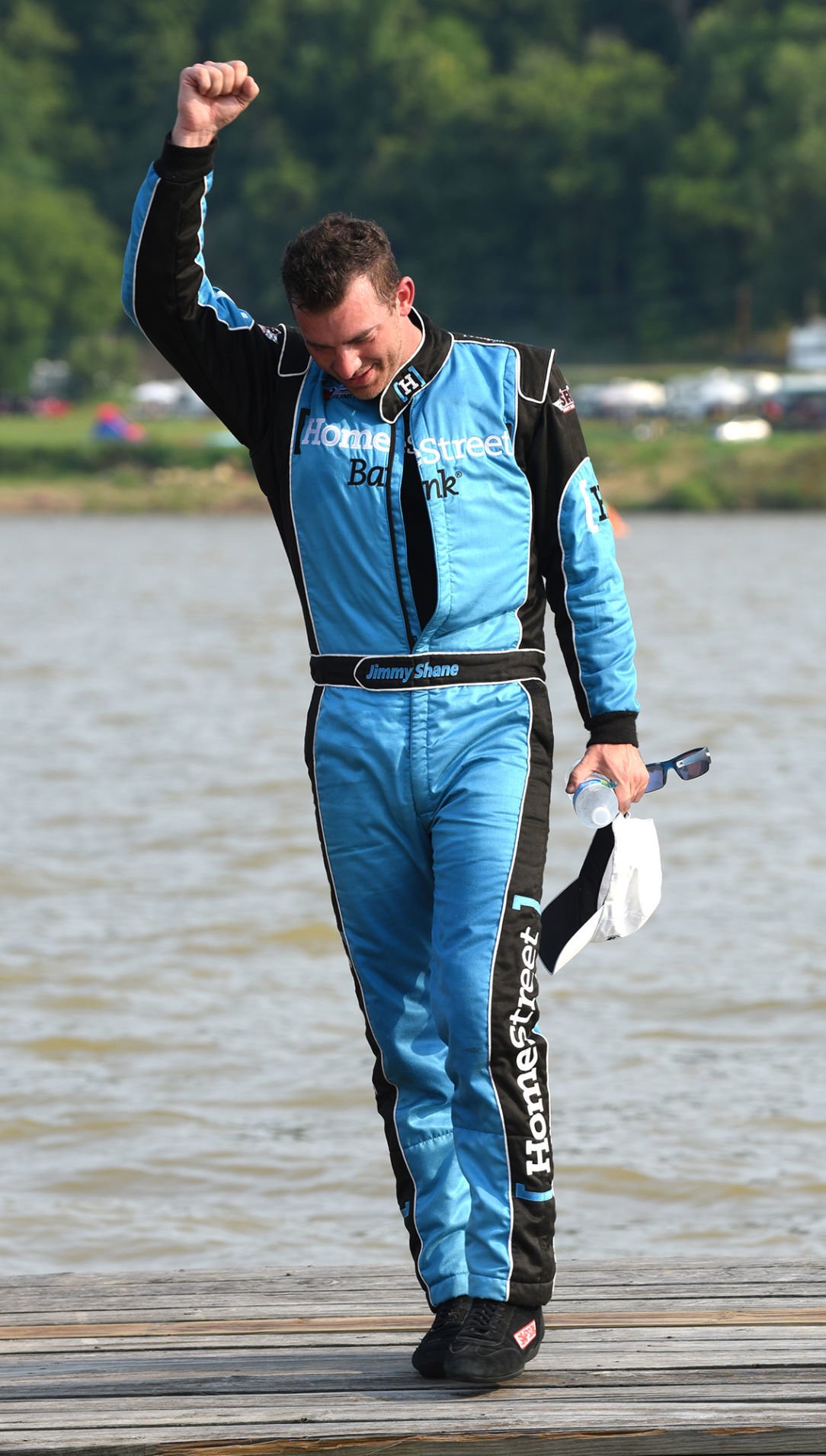 Jimmy Shane gives a triumphant fist thrust as he leaves the dock after winning the APBA Gold Cup in Madison on Sunday. The win was the 20th of his career.

Jimmy Shane steers the U-1 Miss HomeStreet/Miss Madison down the frontstretch during the final heat of the APBA Gold Cup on Sunday in Madison.

Jimmy Shane gives a triumphant fist thrust as he leaves the dock after winning the APBA Gold Cup in Madison on Sunday. The win was the 20th of his career.

Jimmy Shane drove a picture-perfect race to cap off a less than perfect weekend and steer the U-1 Miss HomeStreet/Miss Madison to a rousing win in the APBA Gold Cup on the team’s home waters Sunday.

High water and debris forced cancelation of all on-water activity on Friday and there wasn’t any action on Saturday until after noon. While water conditions were nearly ideal on Sunday, Madison’s notorious first turn still played its part all day, chewing up boats and spitting them out.

All but the HomeStreet, that is. Shane navigated the first turn with aplomb, besting his opponents time and time again with picture-perfect turns that put the black-and-gold Miss Madison out in front every time.

“The key to this race was the first turn,” said HomeStreet crew chief Mike Hanson, himself a former Miss Madison pilot. “And Jimmy was perfect all day.”

The Final Heat was a microcosm of the day. While Shane didn’t necessarily want lane one in the final, his competitors ceded it to him during the milling period and Shane made most of it.

Crafty veteran Dave Villwock led the field at the start in the U-40 Miss Beacon Plumbing, but it was Shane who came out of turn one in front and then never looked back. With only Andrew Tate left to challenge him — and his boat stricken with broken rear wings — Shane was never threatened as he cruised to the win.

“I’ve been saying all along that it is a risk-reward trying to go in lane one here. Luckily with just four boats, you can get a little bit of room,” Shane said. “Dave held me in there pretty tight. I was about a boat-length behind going into the corner and I think coming out I might have had one boat-length advantage and the boat just had the right package, the right set-up for the water, and we took off.”

Villwock actually was assessed a one-lap penalty in that first turn when he beared out, forcing the rest of the field to swing wide. Once the penalty was announced, Villwock laid back and settled for fifth.

Tate was the only driver who had a chance to catch Shane. The 2018 Gold Cup winner stayed on Shane’s hip through the first lap, but took a big hop in the first turn on the second lap and damaged his wings. By the start of the third lap, the wings were gone.

Without the rear wings, Tate was able to corner his boat better, but he simply didn’t have the speed in the straightaways to keep up with Shane.

“That was pretty interesting. I’ve never driven a boat without a rear wing before,” Tate said. “Overall we had a pretty good day; I just wish we could have done better in the final.”

Corey Peabody finished third in the U-9 Pinnacle Peak Consultants, his second podium finish in as many weeks on the H1 Unlimited Series, while Jamie Nilsen was fourth in the U-11 J&Ds. Nilsen was questionable to even make the final after sustaining boat damage — again in the first turn — but the crew worked hard to repair the busted sponson and get the boat back on the water.

The fastest boat in the field, J. Michael Kelly’s U-8 Miss Tri-Cities, missed the final heat one week after winning the season-opener in Guntersville, Alabama. Like everybody else, Kelly had trouble in the first turn, spinning out twice, the second of which forced the team from the race after the skidfin pulled away from the hull, ripping a hole in the side of the boat.

The six preliminary heats were dominated by Shane and Tate, who won three each and didn’t get a chance to face each other until the final. Tate’s win in Heat 3A was the most exciting of the day. After Kelly spun out while leading the heat, Tate and Peabody battled deck-to-deck for three laps before Tate pulled away over the final 400 feet to win by a boat-length.

Shane posed for pictures with the Gold Cup and McCormick’s grandson, Jak McCormick, after the race and said that he was thrilled to keep the tradition alive.

“We accomplished all of our goals with this race and I couldn’t be happier for the team or the citizens of Madison,” said Shane, who won his fifth APBA Gold Cup and the team’s sixth. “It’s a pretty historic win, 50 years after Jim McCormick and just a wonderful way to finish off the weekend.”