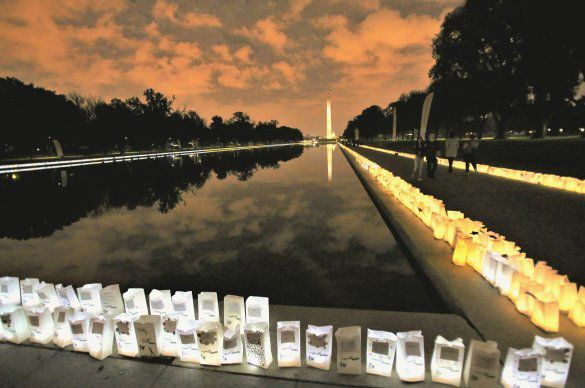 Bags from previous Lights of Hope campaigns can be seen glowing along the National Mall outside of the Lincoln Memorial. 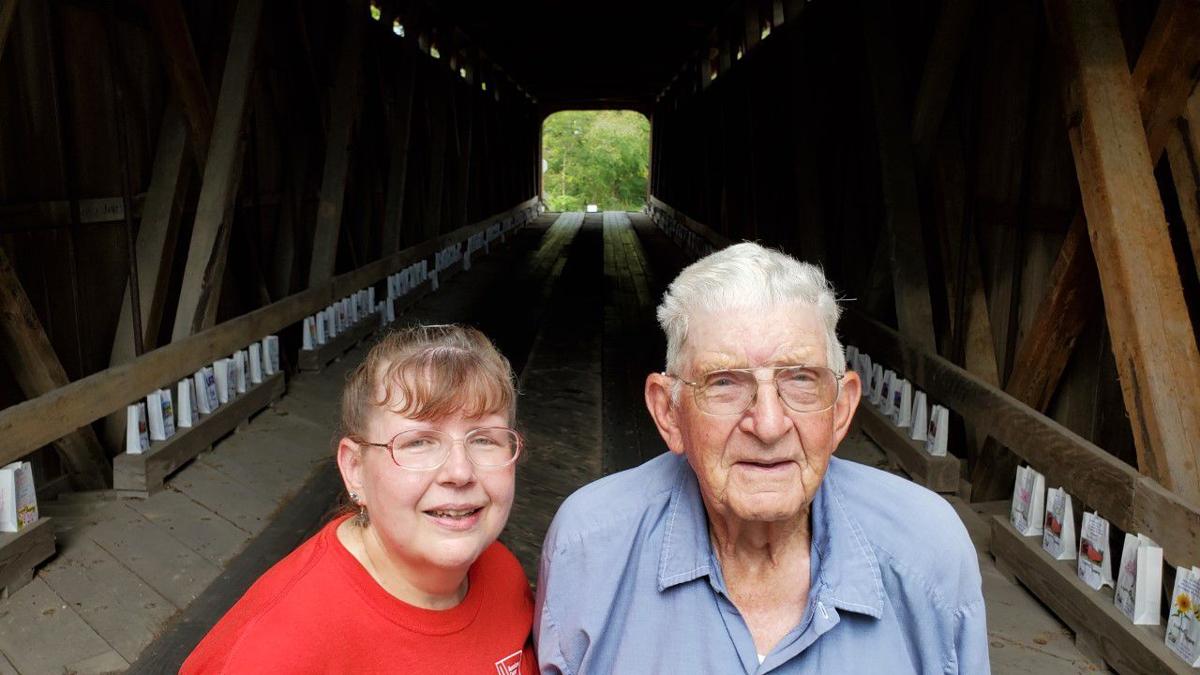 Mary Kost (left) and her father, Robert Keller, are pictured at the James Covered Bridge. 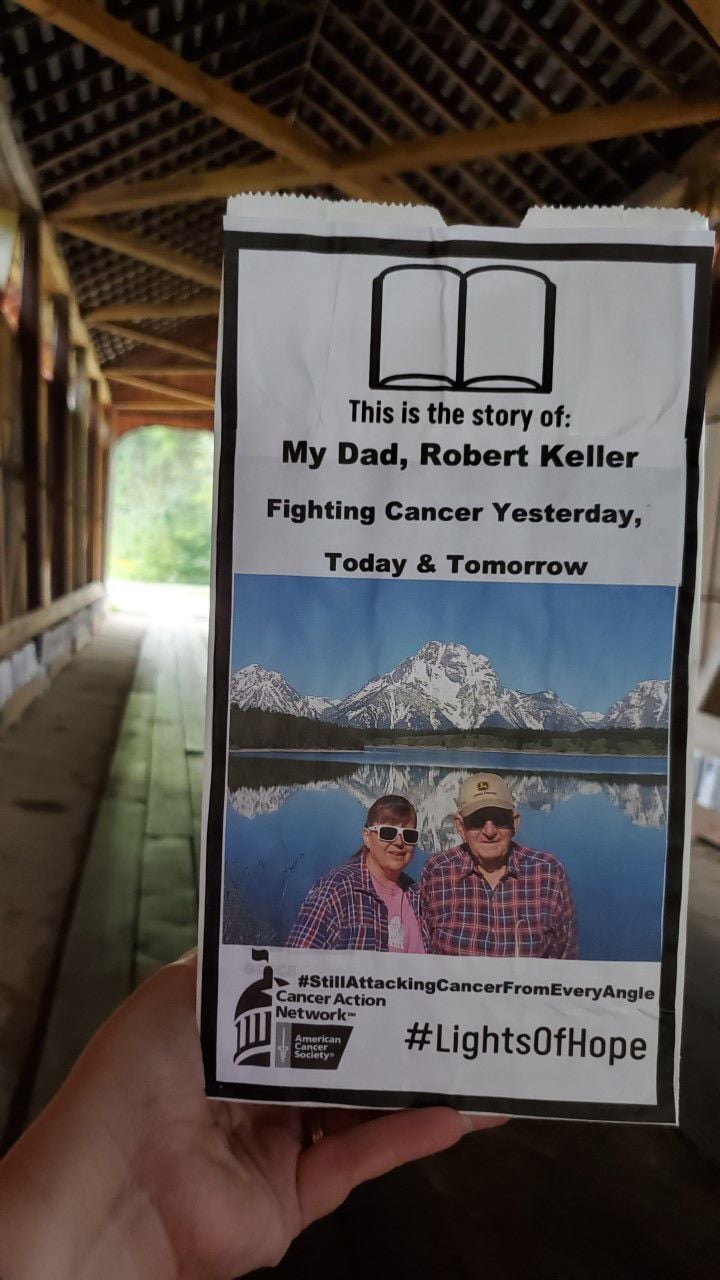 Donors can decorate bags to represent loved ones who have battled cancer.

Bags from previous Lights of Hope campaigns can be seen glowing along the National Mall outside of the Lincoln Memorial.

Mary Kost (left) and her father, Robert Keller, are pictured at the James Covered Bridge.

Donors can decorate bags to represent loved ones who have battled cancer.

Lights of Hope is homeward bound this year — any Jennings County resident who has been affected by cancer, whether personally or someone you love, will appreciate the spectacle of Lights of Hope taking place at the James Covered Bridge in Commiskey on September 18.

The Lights of Hope event is the American Cancer Society Cancer Action Network’s signature fundraiser dedicated to honoring those who have been touched by cancer and remembering those lost. This year will mark the 11th anniversary of the event.

With help from volunteers across the country they will collect more than 50,000 Lights of Hope that that will be displayed in communities across America.

Mary Kost of Jennings County is the coordinator for the local Lights of Hope campaign. She has been a volunteer for the American Cancer Society Cancer Action Network (ACS CAN) since 2009 to help make the fight against cancer a national priority. This goal stemmed from seeing her mother-in-law, father, husband and many friends and family members fight the horrible disease. Her father has lived within two miles of the bridge from which the Lights of Hope event will take place his entire life.

“I am excited to be a part of this incredible event again and I hope you will join me honoring friends and family who have been touched by cancer,” said Kost. “I’m from Jennings County and bringing this event to my hometown holds a lot of meaning for me.”

Robert Keller, Kost’s dad, lives in Commiskey. Patsy Keller was his wife and she passed away in 2014. He’s been a farmer and worked at Cummins for 32 years and has been active in Graham Presbyterian Church since childhood.

Robert began passing blood in his urine in December of 2017 and was eventually diagnosed with kidney cancer after months of doctor visits and multiple tests.

He met with Dr Chandru Sundaram, a urology surgeon who had been paving the way for minimal invasive surgeries since 2002. What set Dr. Sundaram apart from everyone else was that his technique involved the use of a robot to perform laparoscopic surgery and his specialty was kidney cancer. Robot-assisted surgery is a relatively new approach and allows for a much more precision, especially when working in very small areas.

“This type of surgery was just what Dad needed because the cancer had not only taken over the entire right kidney,” Kost revealed, “it was also working it’s way out the main artery that feeds the kidney & moving toward his heart.”

On June 12, 2018, Robert Keller, aged 83, had his right kidney removed by Dr. Sundaram as well as the cancer that was in the artery. Due to the tedious and slow-paced detailed work, the surgery took several hours longer thank anticipated. Advancements in this type of surgery allowed Keller to heal faster due to a much smaller incision. And just three days after the surgery, he walked three laps at IU Hospital without stopping!

The next step was meeting oncologist, Dr. Stephanie Wagner at Columbus Regional Hospital. She set up an immunotherapy regimen using the drug Opdivo. This type of treatment works with your body’s own natural immune system and helps it to recognize and attack cancer cells. And as an added benefit, immunotherapy typically has fewer side effects and is not as harsh on the patient as traditional chemotherapy. He still sees Dr. Wagner on a regular basis and is monitored closely by her.

Kost’s father is just one of many — “way too many family members and friends” — who have been touched by cancer. Having seen clearly, up close and personal, how cancer research is making a positive impact on the lives of cancer patients, Kost continues to fight for increased cancer research funding.

It’s well established that early detection is the key to curing cancer. New technology is emerging and several companies are working to develop multi-cancer early detection blood tests. These tests are designed to compliment, not replace, existing early detection tests. Published data indicates that some of these tests can screen for more than 50 cancers at the same time, including some rare cancers. This would allow medical experts to detect more cancers at earlier stages. This simple blood test would be less invasive and more accessible, which would expand screening opportunities especially to traditionally underserved communities.

Kost adds that you can help send a visible reminder to Congress that they need to make fighting cancer a legislative priority.

Of course, another way to support the cause is to donate to the Lights of Hope campaign.

Luminary bags, purchased for a minimum of $10 and decorated by donors, will line the James Covered Bridge in honor or in memory of a loved one who has been touched by cancer. Last year there were over 200 Lights of Hope and, this year, Kost is expecting over 500 bags.

Normally, the Lights for Hope ceremony is held at the Lincoln Memorial in Washington D.C., so it’s a silver lining of the COVID-19 pandemic to be able to “bring hope home” as Kost puts it.

You can donate online at http://action.fightcancer.org/goto/Mary-Kost or donate the day of the event. The bags will be lit with tea lights starting at 6 p.m. until 9 p.m. The event will be held at 185 W. CR 625 S. in Commiskey.

Go to http://action.fightcancer.org/goto/Mary-Kost for Lights of Hope.

Go to www.relayforlife.org/floydcountyIN for more information.