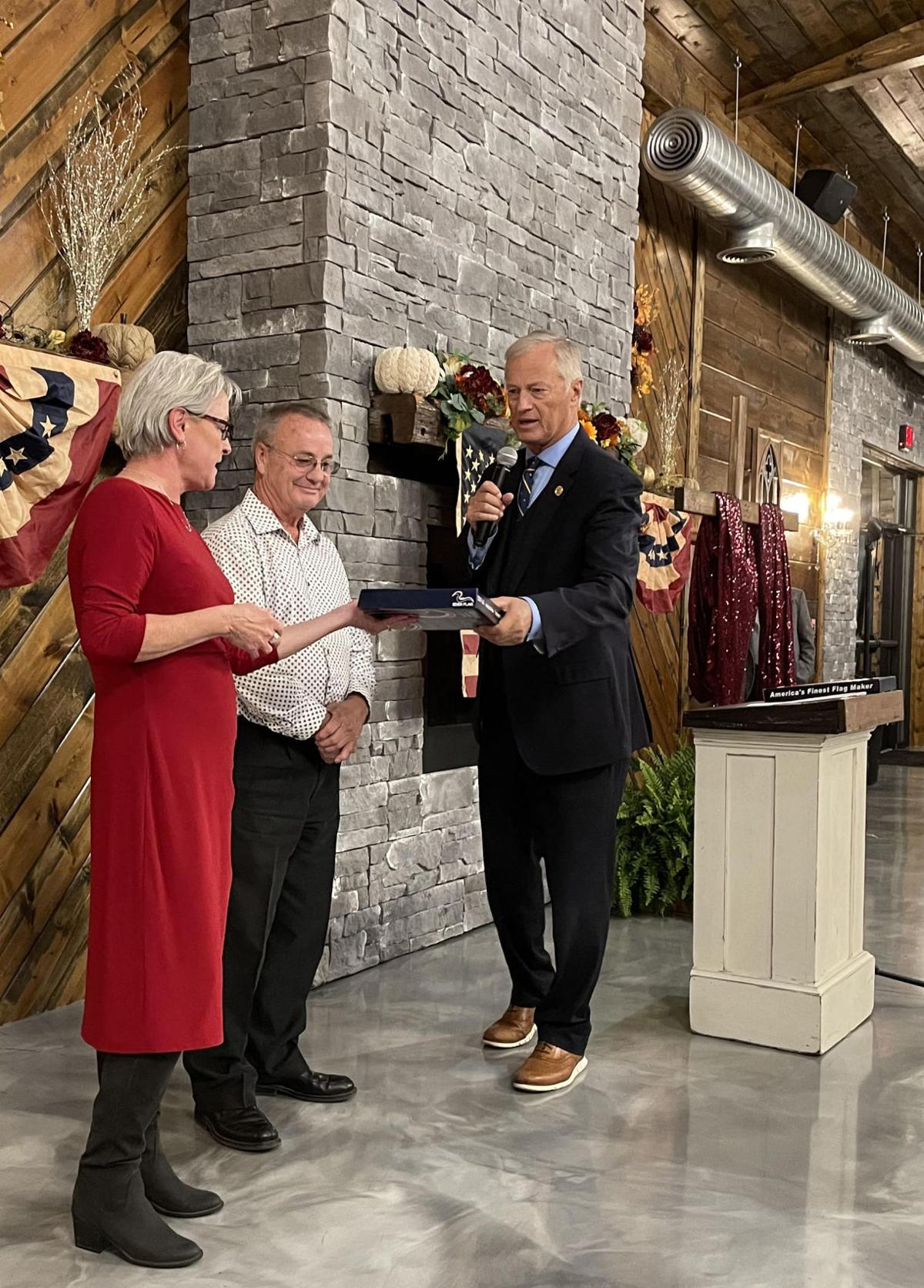 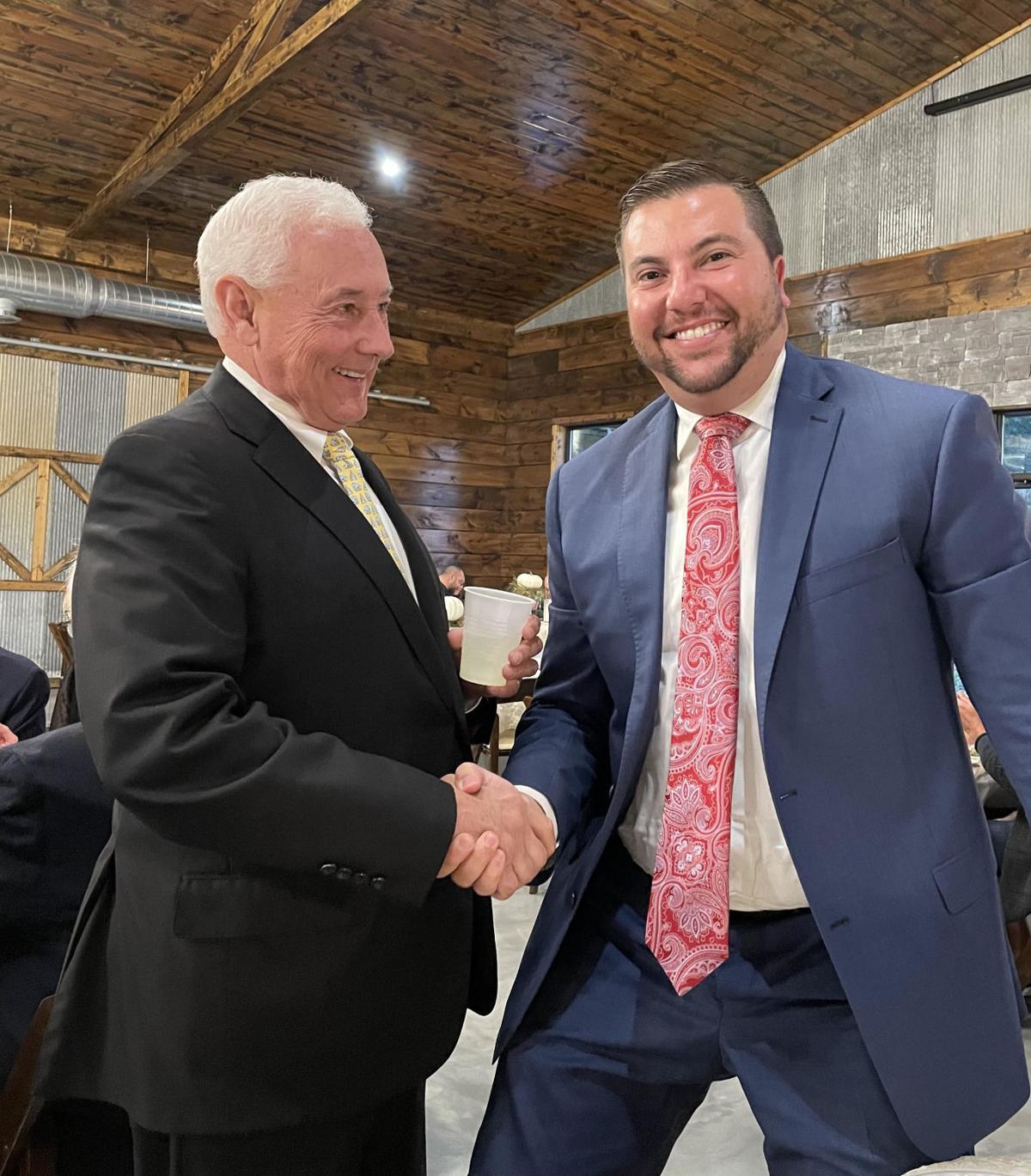 Congressman Greg Pence, left, shakes hands with Matt Miller, a part-time deputy with the Jennings County Sheriff’s Office and a member of the Bartholomew County Council. Miller will be running for State Representative for District 73, which now includes Geneva Township in Jennings County after the recent redistricting. 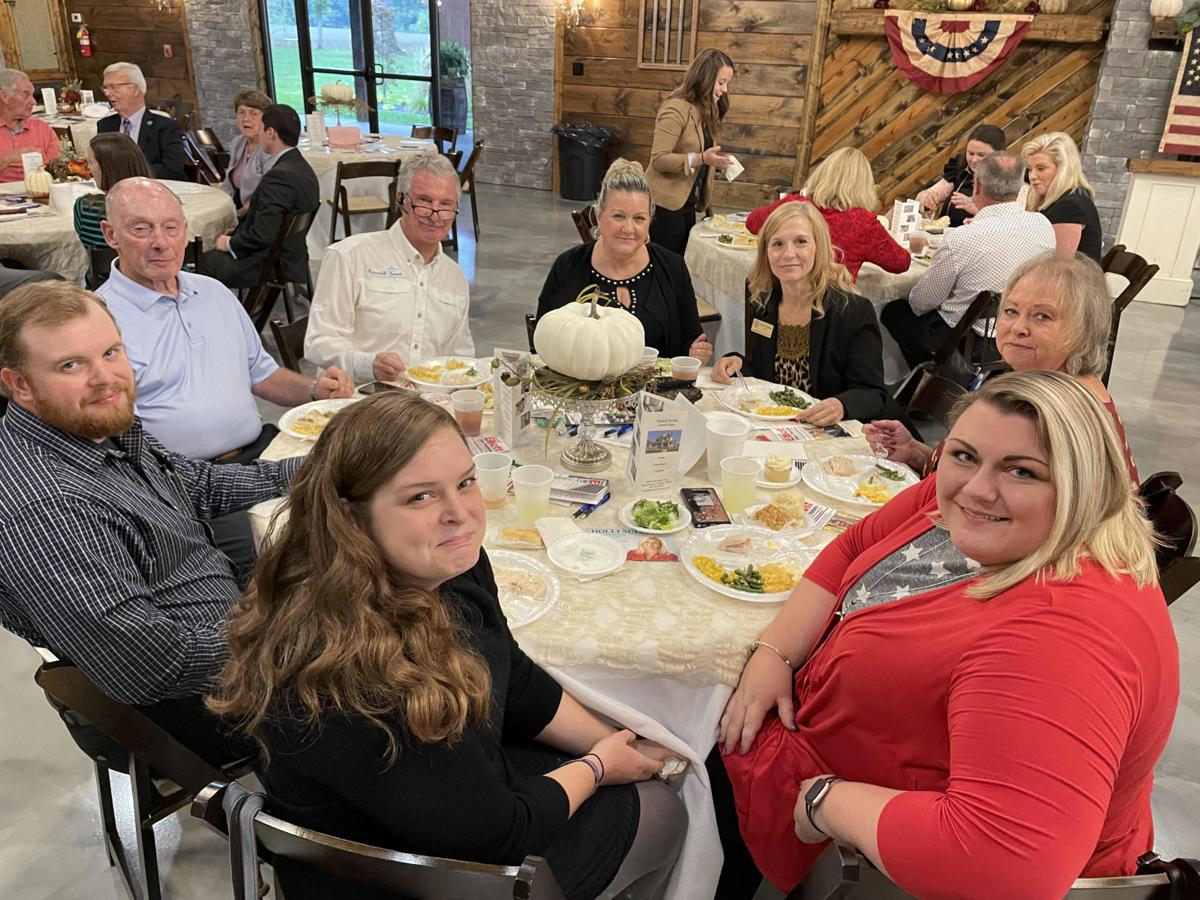 County Clerk Amy Thompson, third from right, bid the highest for her table to have the honor of dining first at the Lincoln-Reagan Day dinner last week. 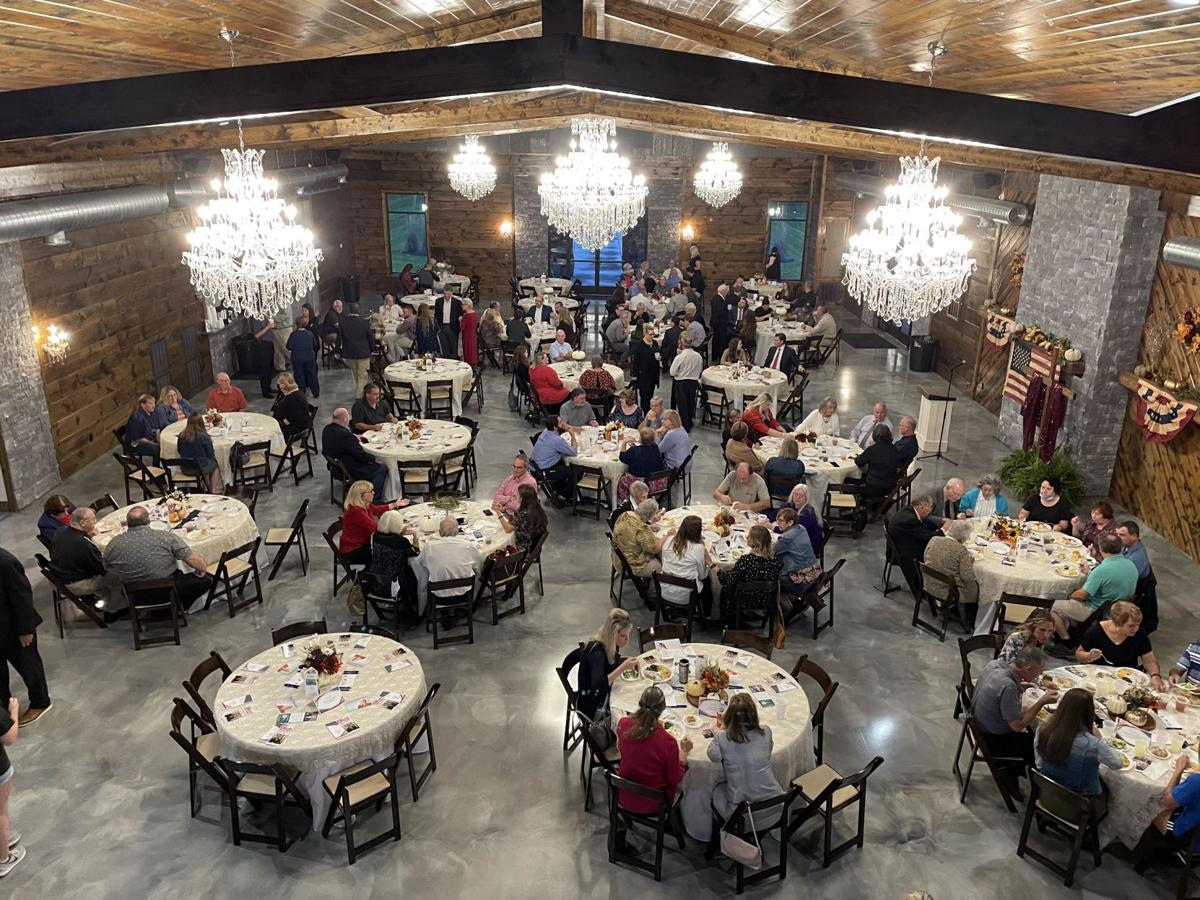 The Barn venue was a full house during the 2021 Lincoln-Reagan Dinner.

Congressman Greg Pence, left, shakes hands with Matt Miller, a part-time deputy with the Jennings County Sheriff’s Office and a member of the Bartholomew County Council. Miller will be running for State Representative for District 73, which now includes Geneva Township in Jennings County after the recent redistricting.

County Clerk Amy Thompson, third from right, bid the highest for her table to have the honor of dining first at the Lincoln-Reagan Day dinner last week.

The Barn venue was a full house during the 2021 Lincoln-Reagan Dinner.

Despite it not being an election year, Jennings County Republicans still managed to fill The Barn venue at Willow Lake Event Center on October 6 for the annual Lincoln-Reagan Day Dinner.

“You can tell this is my first time,” Hatfield joked to the assembled crowd at the start of evening. “Jeanie set the bar very high.”

He then recognized all party elected officials for the city and county, which took a long time, as Jennings is a mostly Red county, before handing the mic over to the Master of Ceremonies for the night, State Representative Randy Frye.

Rep. Frye introduced the special guest speaker, Secretary of State Holli Sullivan and visiting state officials Congressman Greg Pence and Senator Jean Leising. He also made sure to announce that it was former PD&S staff member Tracy Eder’s birthday as well as gifted Brian Hatfield and Mandy Creech with United States flags, signed by Gov. Eric Holcomb, that had flown over the state building for their hard work in organizing the night’s event.

Rep. Frye also announced that he will be running for re-election for House District 67, which includes all of Jennings County except Geneva Township.

“It is an honor to represent this region,” he said, “ and I would like to continue the important work we’ve been doing.”

Dinner commenced, but not before the classic auctioning off of the right to dine first.

The auction wasn’t nearly as competitive as last year and County Clerk Amy Thompson’s table quickly took the prize with a $400 bid.

Afterwards, Vicky Strickland with the Republican Women’s Group announced the recipients of the group’s two $500 scholarships: Riley Hyden, daughter of Angela and Trevor Hyden; and Ellie Ebbinger, daughter of Chad and Nicki Ebinger. Riley will be attending the University of Southern Indiana to study respiratory therapy and Ellie will be majoring in business and marketing at Indiana University.

But, as Vicky pointed out, they cannot provide the scholarships without donations, which led to the scholarship fund auction. Four items were auctioned off.

A wine and cheese basket donated by Barb and Howard Malcomb went to local Mike Miller for $80; the second item was a United States flag signed by Gov. Eric Holcomb donated by Rep. Frye sold for $100.

The final two items were two nights, auctioned off separately as one night each to two buyers, staying at the Rudicel Event Center. Each buyer received the whole house for one night. The first night went to Clerk Amy Thompson for $350 and the second night went to City Attorney Larry Greathouse for $300.

Secretary of State Holli Sullivan next took to the podium. Secretary Sullivan, who recently visited Jennings County as part of her tour to visit every county clerk in Indiana, expressed great joy for her position and a love for the state.

“It is quite an honor to call each and everyone of you constituents. After eight years of legislature focused on southwest Indiana, I now get to focus on this entire state of Indiana which I dearly love.”

Sullivan lives in Evansville with her husband and the two have three children. She has been Secretary for approximately six months, following Connie Lawson’s retirement in February after 32 years, the longest serving Secretary of State in Indiana.

Sullivan spoke of using 2021 as a runway to take a deep dive into how 2020 went and prepare for 2022. Election integrity is a major and important responsibility of the Secretary of State, and the “red meat” as Sullivan puts it, of what she feels Republicans need to be talking about, is the recent “federal overreach” of the Democratic Congress led by President Joe Biden and Nancy Pelosi.

The Secretary — who also holds the title of Chief Elections Officer and also holds an engineering degree — views the election as a process. “We do a great job in Indiana, but we can always do better. I don’t want to fix anything that’s not broke, but I want Hoosiers to be in control of our elections. The reason that Hoosiers trust our elections in the State of Indiana, is because Hoosiers run the elections in the State of Indiana. Under the Sullivan administration, I can promise you we’re going to keep it that way.”

She continues, saying that when the public loses confidence in free and fair elections, they lose faith in the value of their vote and choose to sit at home, on the side lines, rather than make their voice heard, which is when, Sullivan said, “we need to be afraid for our country. The biggest threat to our election process is apathy.”

With that, Secretary Sullivan ended by asking the room, “Are we going to be part of the solution or part of the problem?”

Congressman Greg Pence followed by doing a Q&A. Beforehand, however, he expressed his sorrow that, after 2022, he will no longer be representing Jennings County now the it is part of District 9, which is represented by Trey Hollingsworth.

“My heart’s broke, I like to be here so much and I enjoy all the folks, but I will still be serving you until January 2023.”

He was asked about the atmosphere in Washington D.C., what his priorities are in 2022, what effect — positive or negative — do you think the Afghanistan refugees will have on Indiana and where he was on January 6 when the U.S. Capitol was breached by a mob of protestors.

With this last question, the congressman regaled his experience of being trapped in the building with his brother, former Vice-President Mike Pence and his sister-in-law and niece, and how his brother refused to leave his post despite the insistence of the Secret Service.

“You could hear a pin drop,” said Brian Hatfield regarding the congressman’s story. “You don’t get an inside view of what happened there. He’s always been great to North Vernon, I’ll be sad not to have him as our representative.” Hatfield did add that he is looking forward to having Trey Hollingsworth as the county’s new district representative, and revealed that Hollingsworth will be the MC for next year’s dinner.

“I thought the dinner went very well, I was very pleased,” Hatfield said of the night. He mentioned how excited he was to have so many state elected officials present during a non-election year.

“The behind-the-scenes was all done by Mandy Creech, Vicky Strickland and Deb Moran,” he praised. “They really stepped up and took care of everything.”

Overall, Hatfield was pleased with the huge turnout for his first-ever Lincoln-Reagan Day Dinner as Party Chair. “It was a good time. I look forward to the next election so we can capture more seats in the county and city.”