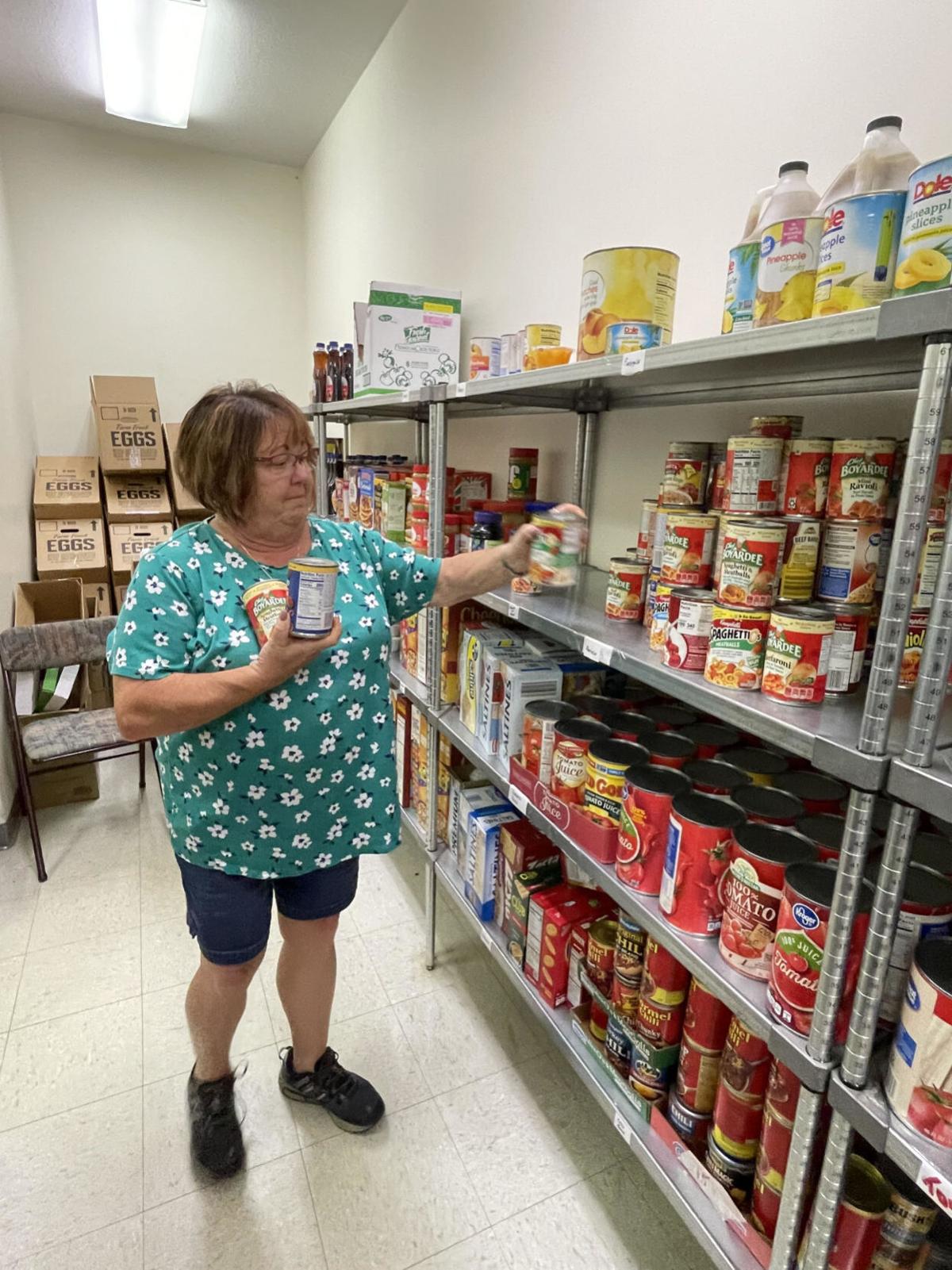 One of Bee’s jobs as volunteer director is stocking the food pantry shelves and keeping the goods on rotation — newest purchases at the back, oldest at the front. 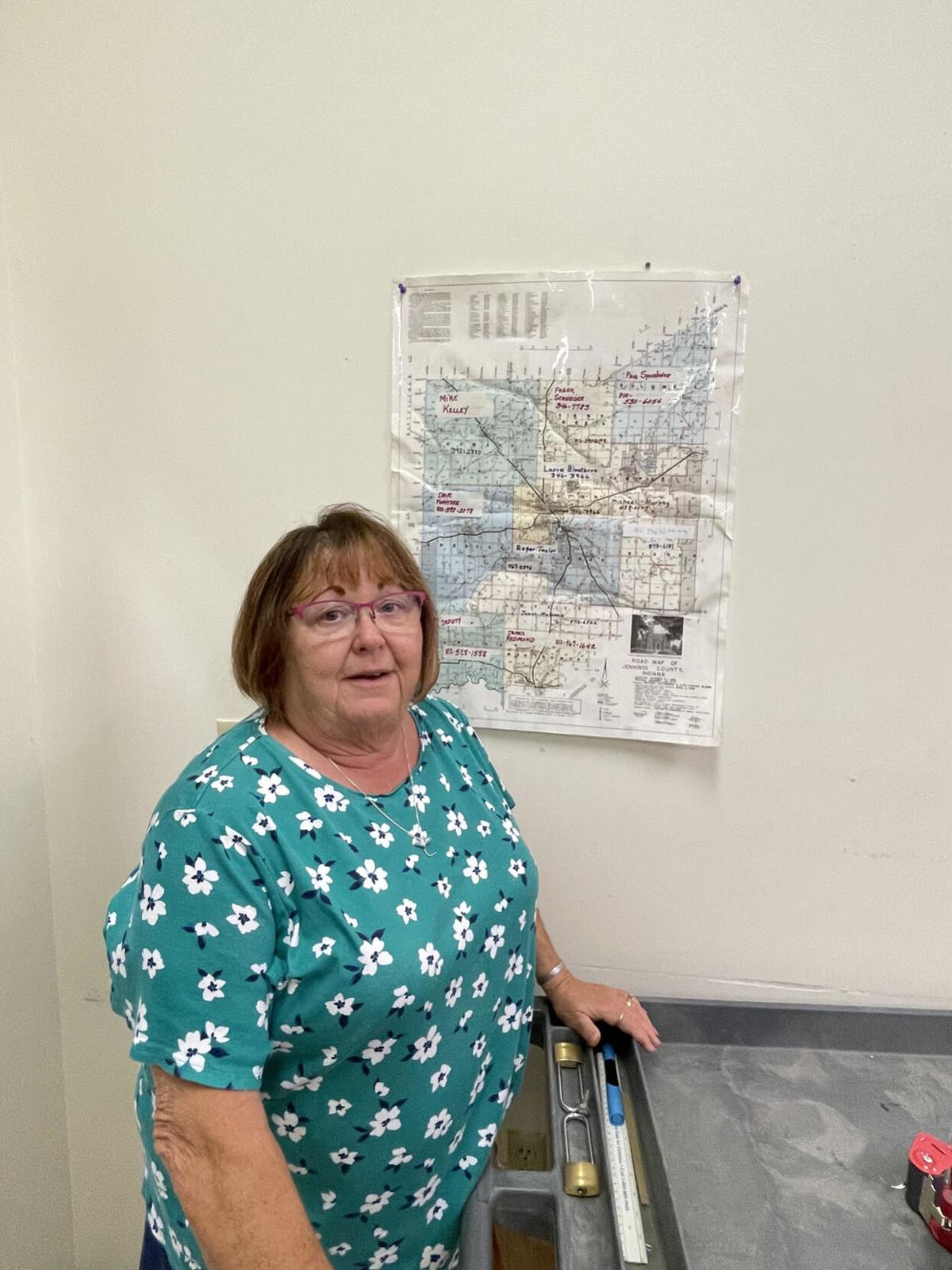 One of Bee’s jobs as volunteer director is stocking the food pantry shelves and keeping the goods on rotation — newest purchases at the back, oldest at the front.

Bee Murphy, a faithful and diligent steward of the Jennings County community, is ready to retire and hang up her angel wings.

Bee has been volunteering her time running the Coordinating Council food pantry since 2017, but has been a board member for many years prior, along with her husband, Mike, who has been the Campbell Township trustee for 27 years.

Bee grew up in Seymour, the daughter of Don and Peggy Stearns. She and her husband have been married for 45 years and have two children and three grandchildren: Riley, 15, and Zander, 9, who recently settled in Ohio and 14-year-old Dasen of Scipio. Bee graduated from Jennings County High School in 1974. She spent one year at Ball State before returning home, deciding her biggest ambition was to be a mom and wife.

That urge to nurture and nourish won’t be a shock for those who know her and is evident in her various occupations throughout her life. Bee spent 27 years at Muscatatuck State Hospital and nine and a half years as a custodian for the Jennings County School Corporation.

She retired in 2011 in order to help care for her grandson, Dasen. As a member of the Board of Trustees, Bee remained heavily involved in the community, especially at Christmastime.

Six years later, however, Bee was healing from back surgery and feeling rather down and useless. She says one Sunday night, she prayed that God would make her useful.

The following Monday, an emergency board meeting was called. The board was told they were running out of money and some major changes needed to be made. Without thinking, Bee volunteered to be that change.

Now, for the last four and a half years, she has been a full-time volunteer for the Coordinating Council. A day in her life includes: Grocery shopping for the food pantry, filling the pantry shelves, taking inventory, making up boxes that feed a family of six for a week with three meals a day, cleaning the council building, taking phone calls, assisting trustees, and applying for grants.

And all that is done Monday to Friday from 9 a.m. to 1 p.m. After hours, Bee spends time visiting local businesses and organizations to gather donations to help fund the food pantry.

“There’s not a thing I don’t like,” Bee said of her work. “It’s the little old ladies walking out with a box [of food] with tears in their eyes that tell you ‘thank you.’ That’s what keeps me going.” She is helped by another full-time volunteer, Phil Doty, whom Bee describes as an “all around good guy wanting to help people.” She also credits the trustees, donors, county commissioners, and the local churches and schools for their support over the years. She especially wants to thank her husband, Mike, for how much he does for the council and never complaining.

Running the food pantry, making sure someone in need doesn’t go hungry, is grueling work, but for Bee, it’s worth every second. And she does it with a smile, even though the last time she took time for herself was two years ago when she and her family went on a cruise together.

But, at the age of 65 with three grandkids — two of whom she’s barely seen more than twice a year for a majority of their lives due to her son’s work with the Coast Guard — and having retired once in her life and continuing to deal with back problems, Bee is ready to take a step back. “I want to get to know my grandkids,” she said. “I want to teach my granddaughter how to drive.”

That decision does not come without trepidation and a heavy heart for the community activist.

When asked what would need to happen in order to help her to make a clean break away from her duties as Volunteer Director with a clear conscience, Bee’s response was, “I don’t know if there’s an answer to that.”

According to Bee, the candidate that takes over her role needs to be honest and consistent, to treat everyone with respect, and keep in mind that the job means keeping people from going hungry.

“You gotta be willing to dig in,” she said. “No matter what you’re doing, number one, your word is worth everything. Number two, you’re honest. Number three, you give 110%.”

Bee intends to continue her work with the Board of Trustees, she just won’t be as involved as she is currently. She plans to help whoever fills her shoes adjust and learn the position, but she doesn’t wish to micromanage. Bee wants to make sure the Jennings County community is left in good hands.

“I’m not saying my way is right. I’m not saying I’m the best, because I’m not. But I want to make sure people are treated with respect. I want things to be ran honestly. But I’m not going to be looking over their shoulder. It’s their way, not Bee’s way.”

Anyone interested in taking over the role of Volunteer Director for the Jennings County Coordinating Council, contact Board President James Malcomb at 812-873-6522.