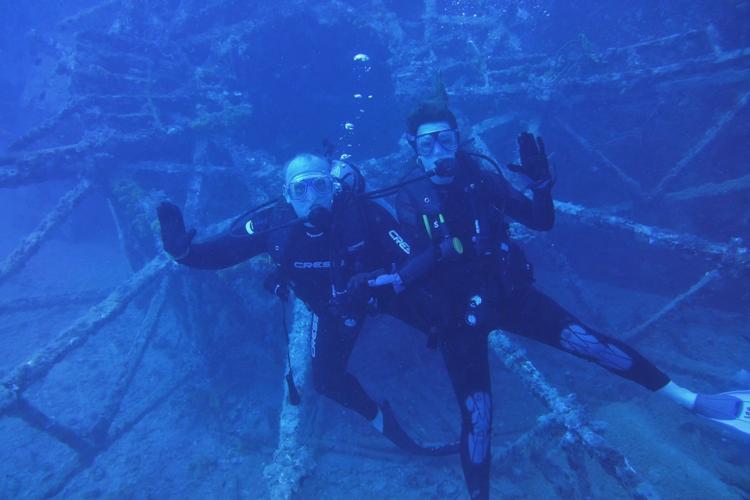 Mark and Mary Schindel during their dive of the USNS Vandenberg in the Florida Keys. 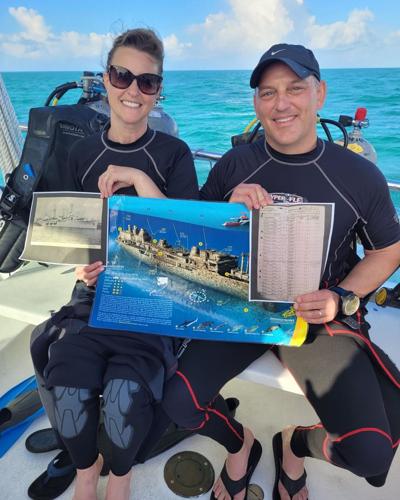 Mary Schindel left, holds a newspaper clipping of the USS Harry Taylor as it is ready to depart for North America from Germany. Mark Schindel, right, holds a photo of the manifest with his family members listed.

Mark and Mary Schindel during their dive of the USNS Vandenberg in the Florida Keys.

Mary Schindel left, holds a newspaper clipping of the USS Harry Taylor as it is ready to depart for North America from Germany. Mark Schindel, right, holds a photo of the manifest with his family members listed.

While most scuba divers need no other reason to dive here other than the intrigue of exploring a 520 foot long sunken war vessel, Schindel has a special link to the ship.

Schindel’s father and other family members were aboard the USS Harry Taylor (which later became the USNS Vandenberg) in 1952 as it left Bremerhaven, Germany carrying troops and European refugees to the United States.

Upon graduation, Schindel left North Vernon to attend Purdue University in West Lafayette where he earned his bachelor’s degree.

He later attended Vanderbilt University in Nashville, TN where he earned his master’s degree in business administration.

Schindel works mostly in Biotech and Medical Devices and he co-founded a medical device company. He works with start-ups and early-stage companies in a consultant and advisory capacity but also works with Purdue Foundry and IU Ventures.

While at Vandervilt, Schindel met his wife, Mary, who was a graduate nursing student and is currently a nurse practitioner and certified nurse midwife. The two live in Warsaw, IN.

Having been born in the United States, Schindel’s own journey with the USNS Vandenburg began when his daughter asked about the ship on which her grandfather, Schindel’s father, came over to America.

Horst Schindel immigrated from Germany in 1952 at the age of 13 with his parents and aunt and uncle. Schindel had a copy of the manifest document from the Immigration Archives that listed the ship name, dates (April 1952), and passenger names which included the names of his family members.

Schindel discovered the ship had an interesting history that included use by the U.S. Navy and Army in WW2, post-war transport, surveillance (including the Cold War), and even in Hollywood. It was transferred for use by the Air Force in the early 1960s and renamed the USNS General Hoyt S. Vandenberg. It was eventually acquired by a group of investors for its ultimate use as an artificial reef and purposely sunk in 2009 off the southern coast of Florida.

Long before diving the USNS Vandenberg, Schindel received his Professional Association of Diving Instructors (PADI) certification in 2002 while living in Indianapolis.

“It was something that looked adventurous and appealing so I enrolled in classes,” said Schindel. “There was classroom and pool time and then a final open water certification process that tests your skills. There are a couple of main certification bodies but PADI is the one that I went through. They also offer more advanced certifications including specialties as well as instructing.”

Schindel has had 20 dives under his belt, including other shipwreck dives. He and his wife lived in Florida for a couple of years in the early 2000s, which made diving more accessible.

“The Vandenberg is a reasonably deep dive, which was further impacted by hurricanes, so I knew that my wife and I would need to get reacquainted with SCUBA as well as making sure our skills were verified if we wanted to dive it,” said Schindel. “Once we confirmed our Keys getaway [...], I researched some of the dive operators offering trips to the Vandenberg.”

Schindel ended up making reservations with Lost Reef Adventures for his trip, which was planned for May 2022. They scheduled shallow reef dives with an instructor to give them the opportunity to get re-acclimated to scuba diving in order to set the stage for a second day to dive to the Vandenberg.

“Having researched it for some time and identified as a bucket list ‘to-do,’ seeing the experience come to fruition was incredible,” Schindel said of the dive. “The weather cooperated perfectly and we had an excellent Dive Master in Dave Parkhurst at Lost Reef Adventures who led us on both the reef and Vandenberg dives.”

According to Schindel, Lost Reef Adventures also appreciated the history and Schindel’s personal connection with the ship.

“Nearly 70 years to the date that my father and his family members had been passengers on the ship from Germany to New York, there I was, experiencing it in a much different level 100 feet under the sea. It was really meaningful and something that will stay with me for a lifetime,” Schindel said.

He also noted how pleased he was to share the experience with his wife and added the clarity and sea life they observed was impressive and enhanced the experience.

“It’s been great to share the experience with family and friends through pictures,” Schindel declared. “There was an American flag in the ship that prior divers placed, reminding me of my family’s journey to America. It was impactful and I was filled with a sense of gratitude.”