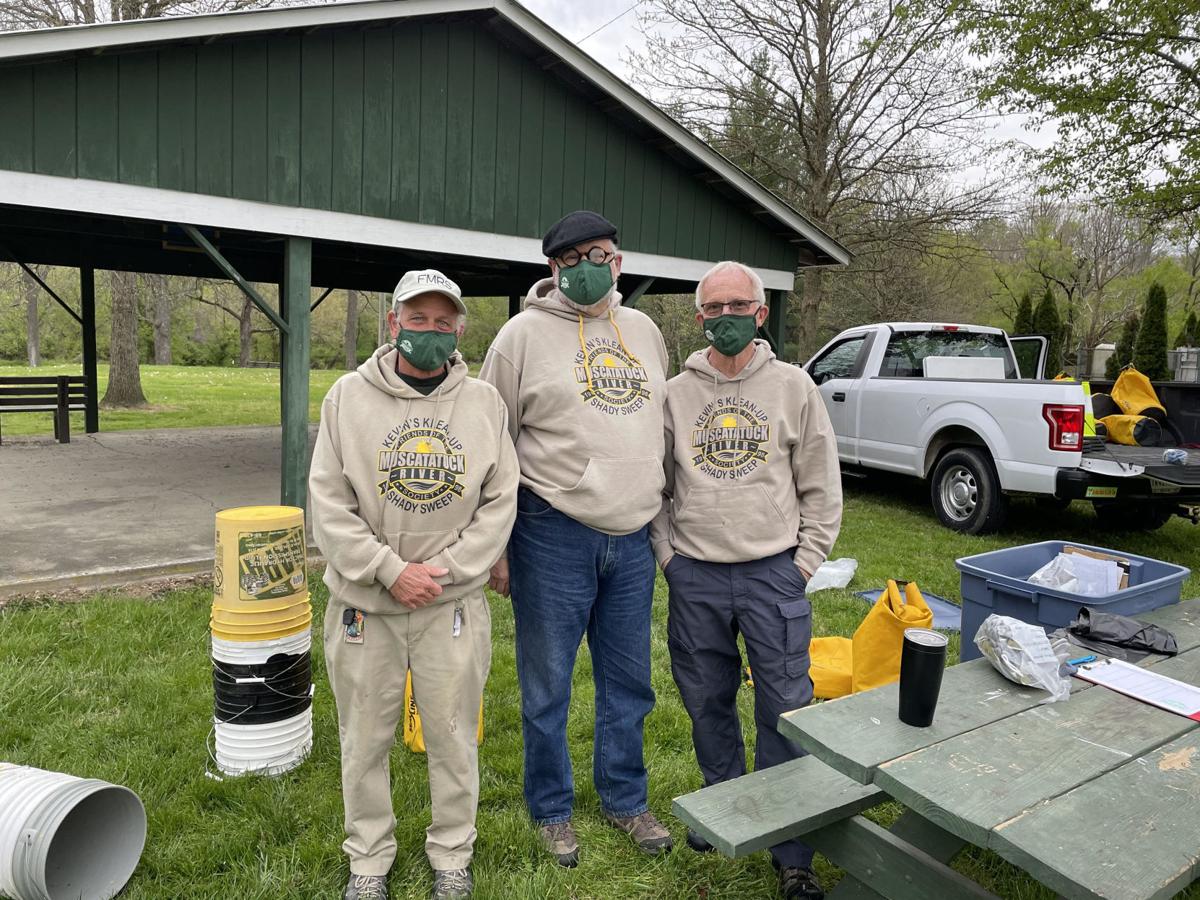 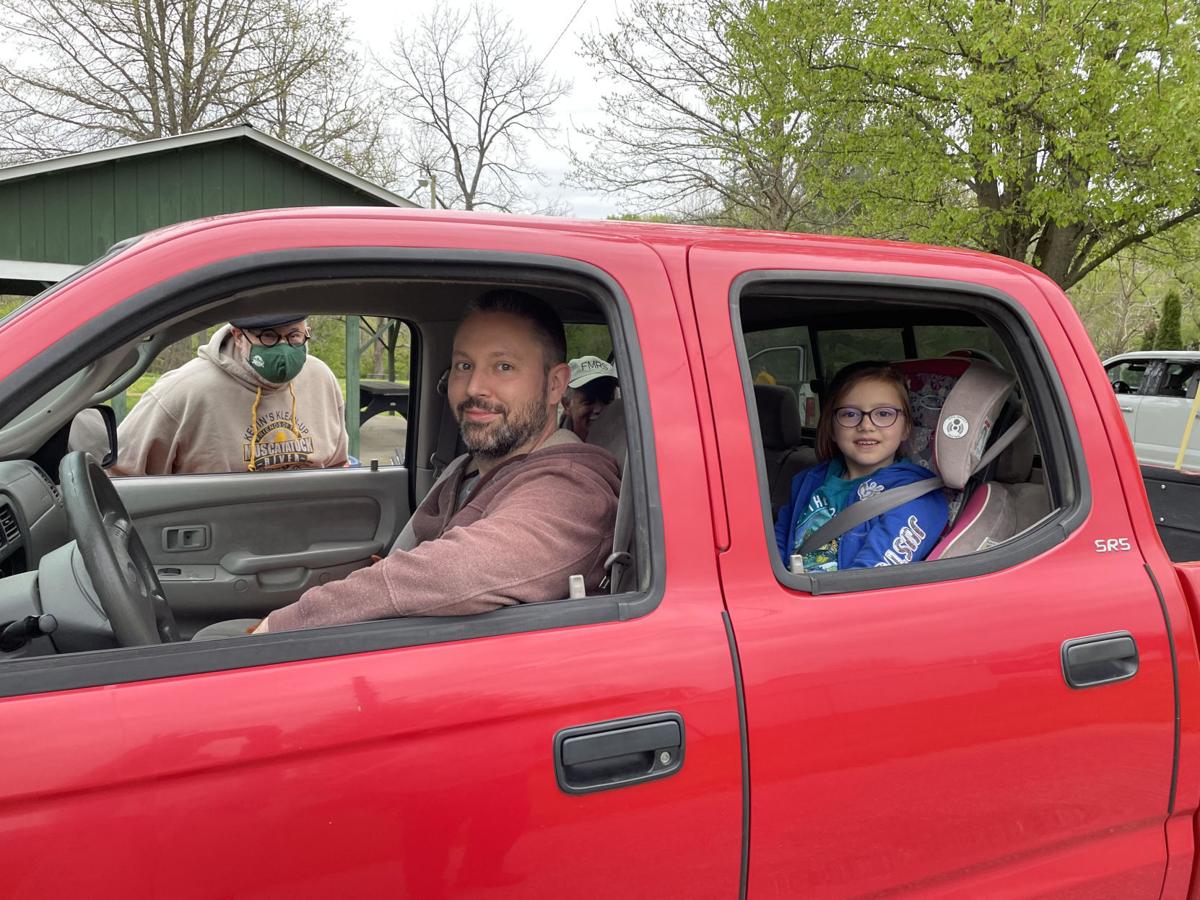 George Haysler and his daughter, Cadence, stopped by to get some gear before heading to Rock Rest Falls. 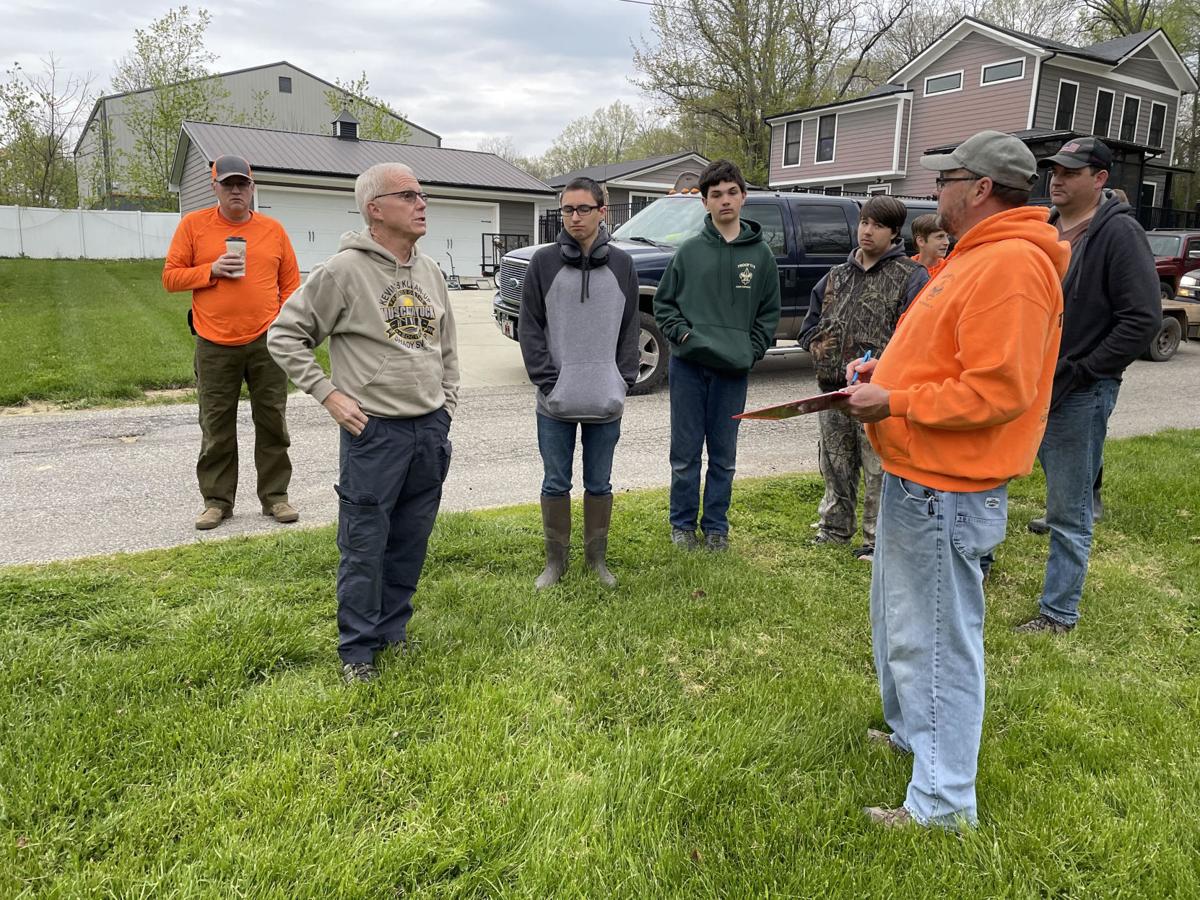 Tom Moore speaks with one of the Scout troops that came to lend a hand during the River Cleanup on April 24.

George Haysler and his daughter, Cadence, stopped by to get some gear before heading to Rock Rest Falls.

Tom Moore speaks with one of the Scout troops that came to lend a hand during the River Cleanup on April 24.

Friends of the Muscatatuck River Society (FMRS) kicked off their 7th annual Kevin’s Klean-Up Saturday, April 24, by registering Boy Scout Troop 532 represented by Andy Sargent. Being the first group at the Vernon Commons gathering site, they garnered an FMRS dry bag complete with garbage bags, forms, and sundry items. As Bill Browning, Jim Longwell, Joan Davis and George Haysler would do after them, Troop 532 picked up shovels, picks, and buckets from equipment manager Les Ticknor in preparation for the semi-annual river sweep. After leaders signed in, FMRS president Jerry Davis sent them on their missions.

Scout Troop 532, Dave, Bob, and Andy Sargent, Robert and Ross Mull, Dave Kipper, Dominic and Johnny Massie, Preston Harriman, Matt Forney, Damion Young and Arthur Owsley, plunked eight canoes in the drink at the Crosley Green bridge and didn’t crawl out until reaching the Sullivan’s Ford bridge, stuffing their mini barges with 28 tires along the trek. It has been a decade since that number of tires has been retrieved from that stretch. Robert and Ross cartaged the cargo to the former TG&Y parking lot where Jim Reeves had Kenny Spencer park a Jennings County Highway Department dump truck for the purpose of transferring the findings to the recycling center.

Boy Scout Troop 518, Jim and Jackson Longwell, Matt and Orin Elkins, Brian Rowda, Elijah Hatton, Lain Ernstes, and JT Monday, each put in four hours of hard labor scouring Sullivan Ford and the Muscatatuck west to Euler Ford. They plucked four tires from the stream and several bags of various litter. The crew carted their load to the county truck next to McDonald’s where Mr. Rowda treated them to lunch.

Les Ticknor coerced Tom Moore into picking up along the Muscatatuck from the Commons to Highways 3 and 7 bridge in Vernon. They picked up two tires in their travels, flushed a mother mallard off her one egg nest, and found two bags worth of flood lorn debris. For the tenth year running, Polar Pop cups carried the day as the most deposited item, followed by scratch off lottery tickets, and Slim Jim wrappers. Amazingly, only one blue mask.

George Haysler and his daughter, Cadence, a Graham Creek kindergartner, upheld their tradition on beautifying Rock Rest Falls. They gathered four full bags of trash from in and around the creek before it could be washed into the river. For Cadence’s seventh Klean-Up, they had quite the visitors list at the Falls as a mushroom hunter slipped on a bluff, bringing out the rescue squad, EMS, and sheriff’s deputies, and a conservation officer to aid the morel seeker. All ended fairly well as the unfortunate pursuer walked out under her own power.

Joan and Jerry Davis, and Delaney Wells cleaned an almost pristine Tunnel Mill area then moved on to a perennial mess on 20 North coming out of Vernon. There was more trash than they could collect in four hours. They totaled six bags of road/creekside litter, a tire, and two bags of the invasive garlic mustard that the Pilgrims brought to our shores. Delaney pulled a water soaked recliner out of the branch and up the hill to the road by herself. If one must dump something, please do it somewhere accessible like a parking lot instead of the waterways. It is so much easier to retrieve.

Rhonda Wettrick, BSA Vernon Troop 541 adult leader, reported her troop cleaned a section of Fish Creek for the river clean up. They found a tire on a rim and an assortment of litter. Her Troop understands the importance of being good stewards to the environment and carrying on the tradition. New scouts were introduced to the tradition of the river clean up with more seasoned scouts leading the way. Helping the Troop was Davey Shaw, Solly Shaw, Gabe Thomas, Javoni Garcia, Tilden Grider, Zach Wettrick, Bradley Setser, and Brody Lark. Additional adult leaders were Josh Shaw and Dave Shaw.

A kudos goes to the Scouts for carrying this Klean-Up on their shoulders. Through pandemic, weather, and missing members, the Klean-Up crew persevered while retrieving 33 tires from the watercourses and 1,824 pounds of litter.

“Jennings County is blessed with the congenial and competent working together of local groups and government,” said Tom Moore. “This year’s Klean-Up was possible only because of both being present in plentiful supply in Jennings County. Thanks to the 56 volunteers on-site and the others not present, yet without whom this could not commence.”

FMRS thanks all who contributed in any way. They are planning another cleanup the first Saturday in October with the annual Shady Sweep. They hope to see you then for a non-pandemic river sweep. Until then remember, every time you benefit the environment, as Dan Shade said, “Mother Nature thanks you.”