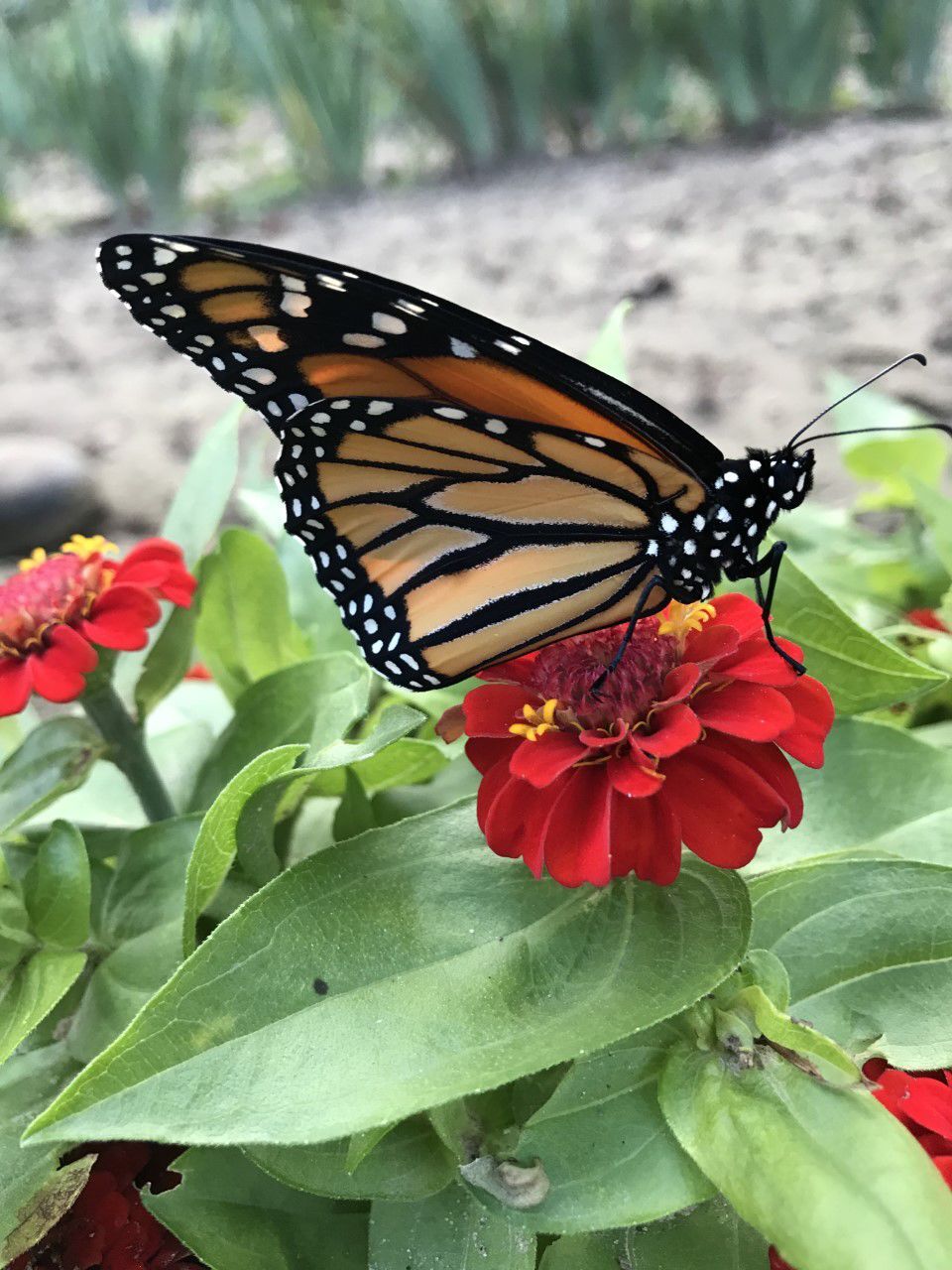 Monarch butterflies are known for their orange wings with black stripes and white dots. 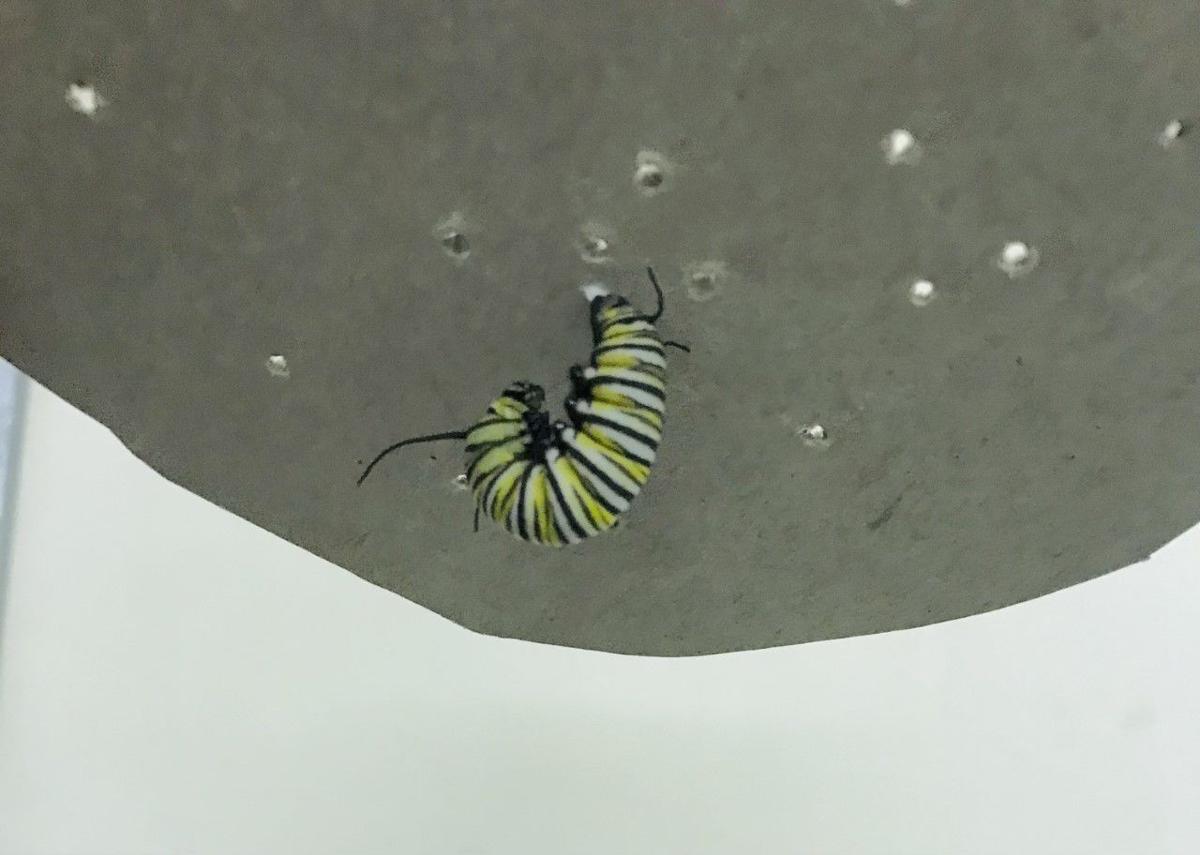 When a caterpillar is ready to turn into a butterfly, a process known as metamorphosis, they hang upside down forming a “J” before becoming a pupa or a chrysalis. 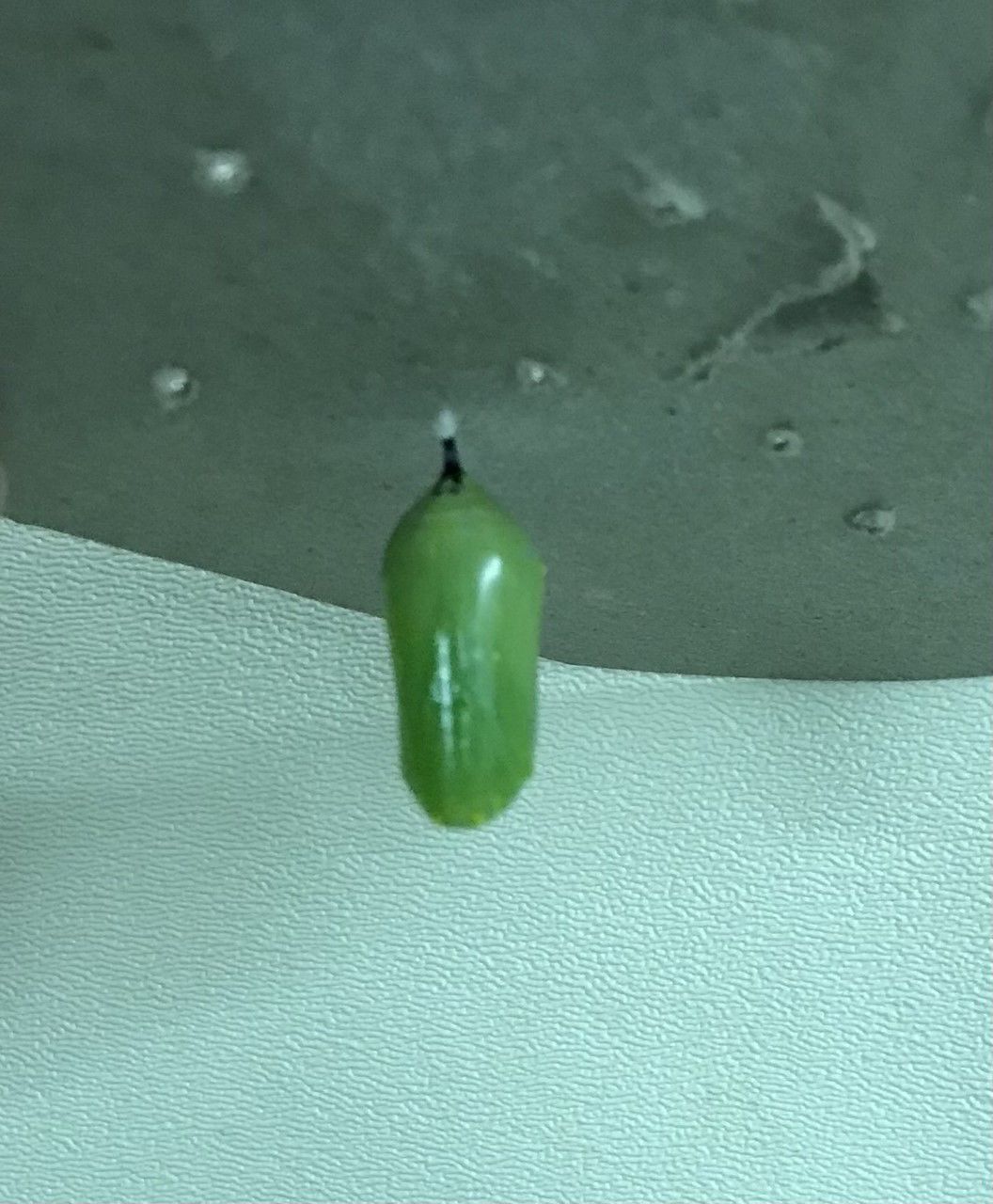 Pictured is what a chrysalis looks like. Turning into a chrysalis is one phase of metamorphosis a caterpillar goes through to become a butterfly. 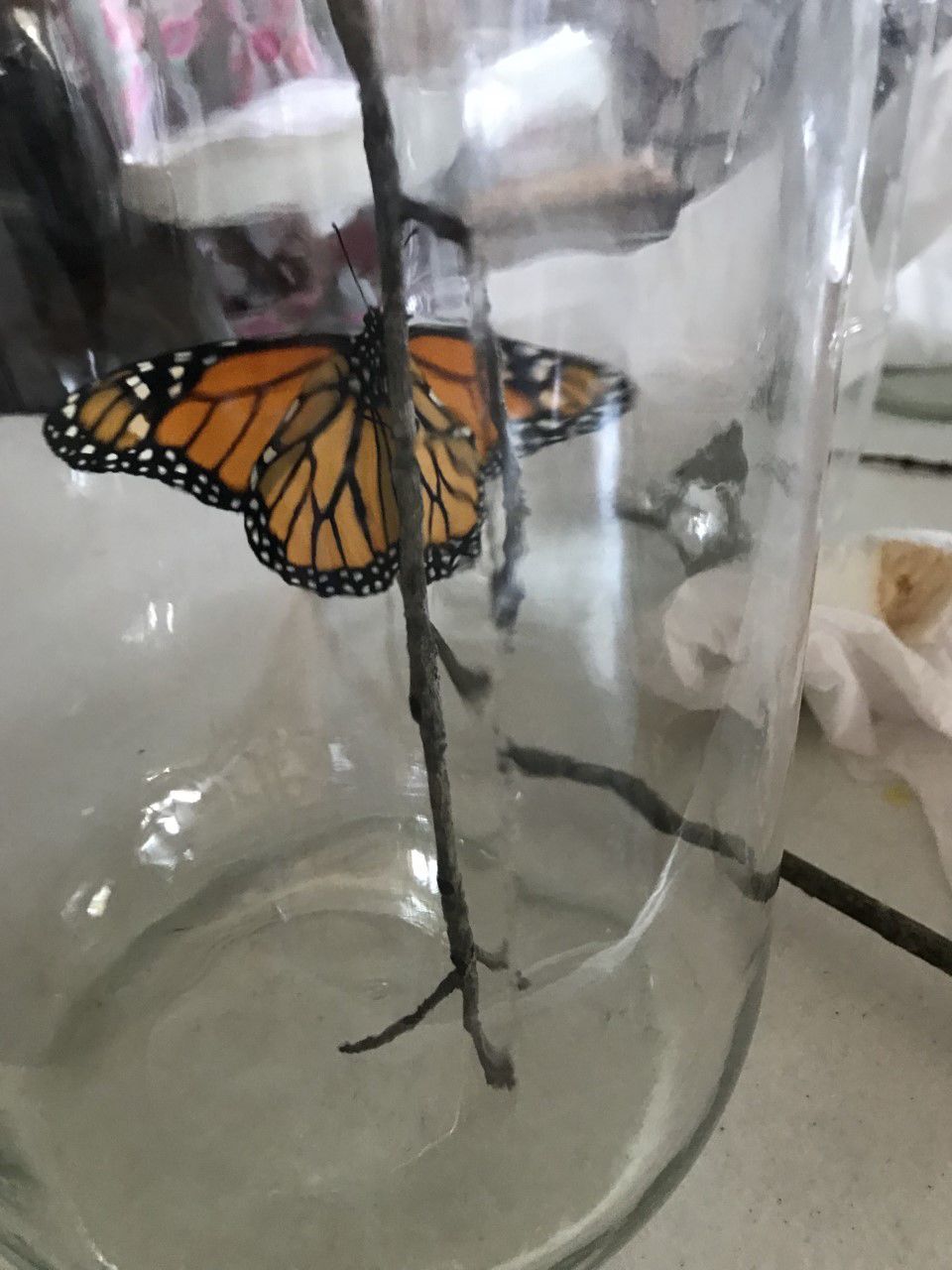 Sandy Vance says that, once the butterflies emerge from the chrysalis, she keeps them in a jar until they “fluff” their wings. 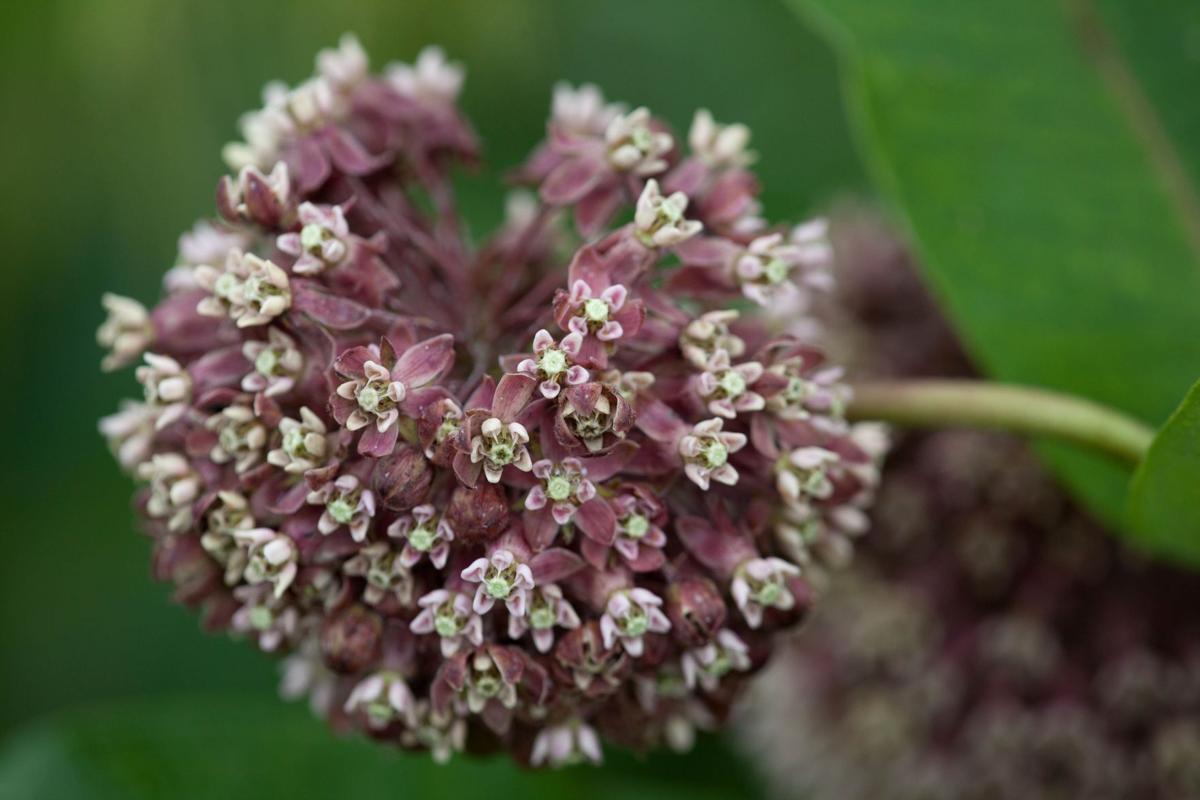 An example of one species of milkweed, the Monarch butterfly’s food source. 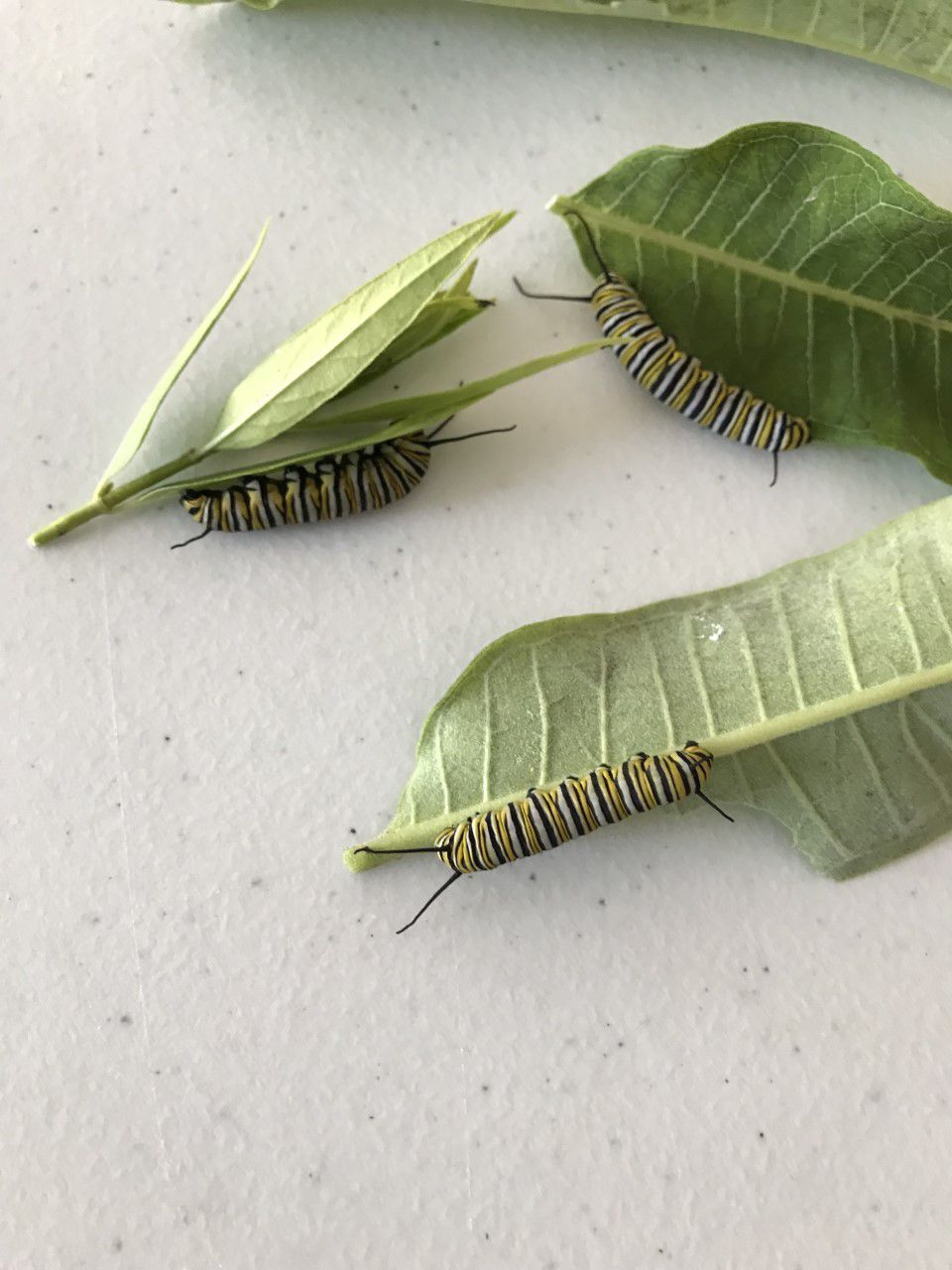 Pictured are Sandy Vance’s three newest additions that she hopes to help grow and transform into butterflies.

Monarch butterflies are known for their orange wings with black stripes and white dots.

When a caterpillar is ready to turn into a butterfly, a process known as metamorphosis, they hang upside down forming a “J” before becoming a pupa or a chrysalis.

Pictured is what a chrysalis looks like. Turning into a chrysalis is one phase of metamorphosis a caterpillar goes through to become a butterfly.

Sandy Vance says that, once the butterflies emerge from the chrysalis, she keeps them in a jar until they “fluff” their wings.

An example of one species of milkweed, the Monarch butterfly’s food source.

Pictured are Sandy Vance’s three newest additions that she hopes to help grow and transform into butterflies.

Picture you are strolling along the paths at Tripton Park and you take the route between the pond and the little wooded area. There is an overgrowth of flowery vegetation and, fluttering about, like a twinkle of sunshine, is a butterfly, adding to the beautiful color of the flowers with its vibrant wings. In particular, the Monarch butterfly is widely recognizable due to its orange wings laced with black stripes and dotted white border design.

Not only are butterflies lovely to look at, but they play a crucial role in the general health of the environment.

While feeding on nectar, butterflies pollinate many types of wildflowers, according to the National Park Service. Monarch butterflies are also an important food source for birds, small animals, and other insects.

And, sadly, the overall eastern Monarch population has declined by more than 80% over the past two decades.

“Monarchs are the face of the wildlife extinction crisis where even once common species could now disappear. They need us because if we don’t act now to save them, Monarch migrations will collapse and that would be morally unforgivable,” said Tierra Curry, a senior scientist at the Center for Biological Diversity (CBD).

Scientists estimate the population size of Monarchs by measuring the area of trees turned orange by the clustering butterflies. That population has been dangerously low since 2008, the CBD reports.

In December the U.S. Fish and Wildlife Service put Monarchs on the waiting list for Endangered Species Act listing, which confers no actual protection to them or their habitat. The Service itself has estimated up to an 80% probability of population collapse for eastern Monarchs within 50 years and a 96-100% probability for the western population.

Monarchs are threatened by pesticides, global climate change, and illegal logging of the forests where they migrate for the winter. Monarchs have lost an estimated 165 million acres of breeding habitat in the United States to herbicide spraying and development in recent decades. The caterpillars only eat milkweed, but the plant has been devastated by increased herbicide spraying in conjunction with corn and soybean crops that have been genetically engineered to tolerate direct spraying. The butterflies are also threatened by neonicotinoid insecticides, fungicides and other chemicals that are toxic to young caterpillars.

Such a declination affects everyone, not just environmentally but morally. Tripton Park just wouldn’t be the same without the friendly, neighborhood butterflies.

And so, a few Jennings County locals have stepped up to take on the challenge of conserving the Monarchs for future generations.

Sandy Vance is a Lovett township resident in Jennings County and the President of the Senior Resource Center in North Vernon.

Sandy and her husband received a visit from their friends, Maurice and Dianne Robison, about two years ago. During a walk around the Vance’s property, the Robisons pointed out all of the different kinds of weeds that butterflies like and, on that same day, Maurice just happened to find a caterpillar, also called a “larva.”

“He was so excited and enthusiastic,” Sandy recounted. “They told us what to do and how to raise the caterpillar into a butterfly. And it worked and we were hooked!”

Last year, the Vances raised three butterflies and this year they will have raised a total of 16.

Come August, the Vances watch for larva to collect. They first have to find milkweed, the Monarchs’ food source. Sandy says there are different kinds of milkweed, including Butterfly, Clasping, Four leaf, Mead’s, Poke, Redding, and Swamp.

The caterpillars are then placed in gallon jars. Milkweed is picked and washed to make sure there’s no predators on the leaves and then fed to the larvae. Within a few days, they climb to the top of the jar to prepare for metamorphosis.

“They seem very lethargic during this process,” Sandy explained.

After they reach the top, they rest for awhile. At this time, they form into a “J” position before they go into a pupa, or “chrysalis,” and then the 11-14 day process of morphing into a butterfly begins.

Mid-September is the peak butterfly season.

The chrysalis will turn dark and transparent. You can actually see the designs on the wings through the shell.

Once they open, the Vances keep them in the jar for a bit until their wings dry. They place a stick in the jar and the newly-formed butterfly will cling to the stick until it “fluffs” its wings.

And then, it’s time to release them. “You just know when to turn them loose. Because they are opening and closing their wings,” said Sandy.

She mentioned that their friends, Howard and Donna Malan, have also developed an interest in Monarchs. Their flowers attract butterflies and they have also raised and released butterflies.

“I feel like we could be the change that could help the Monarch butterfly. We’d like to start a Monarch Butterfly Club in Jennings County. First we need a food supply for our winged friends. And the more milkweed we can plant will help feed and save the Monarchs.”

Sandy recalls that, when she was young and growing up in the country, she always loved to pick the milkweed pods and hold the silky part of the seed, blow them and watch them float into the air.

Over the years there has been less milkweed available for the Monarchs. Monarch caterpillars only eat milkweed, so it’s vital to help this flowery vegetation survive, too.

“We all have the opportunity to save the Monarch butterfly by planting the ‘Weed.’ ” said Sandy. “There are lots of different predators, wasps, ants, parasitic flies, birds, snakes, toads, rats, lizards, dragonflies, frogs, spiders and even monkeys!”

The Monarch butterflies, a stunning display of bright orange and black wings makes this attractive insect a beautiful addition to any garden or prairie.

You may be wondering what brings the monarch to Indiana every summer. During the warmth of spring and summer, native wildflowers begin to grow. Among these flowers are the plants monarchs live for: the milkweeds!

The entire lifecycle of the Monarch butterfly is dependent on the milkweed. It is sometimes called the “milkweed butterfly” because it is the only plant the Monarch larvae, or caterpillars, can eat.

The female Monarch butterfly will lay her eggs on the underside of the milkweed leaves, which provide protection for the developing larvae. The large leaves act like umbrellas, shading the eggs from too much summer sun and sheltering them during strong rainstorms. The leaves also offer an excellent hiding spot from predators that may want to eat the eggs before the larva emerges.

When the larvae hatch, they will begin to munch on the leaves of the milkweed plants, eating day and night for the first few days of life. On the first day, the larva may eat as much as its own weight in food!

Milkweed also provides the monarch butterflies and their larvae with a unique form of protection. The milkweed plant is poisonous, and the larvae ingest a large amount of the toxic substances found in the plant. Like the old saying “you are what you eat,” Monarchs share this defense with the milkweed by storing the poison in their bodies. The bright orange color of the adult monarch’s wings warns other animals that it will not be a very pleasant insect to eat.

But what does the Monarch do for the milkweed? As the adult butterfly flies from flower to flower looking for food, it helps to pollinate the milkweed. This allows the milkweed to successfully produce seeds that will grow and attract more monarchs in the years to come.

Without the milkweed plant, the monarch would not be able to survive. Together, the two species have formed a beautiful relationship that has lasted for generations.