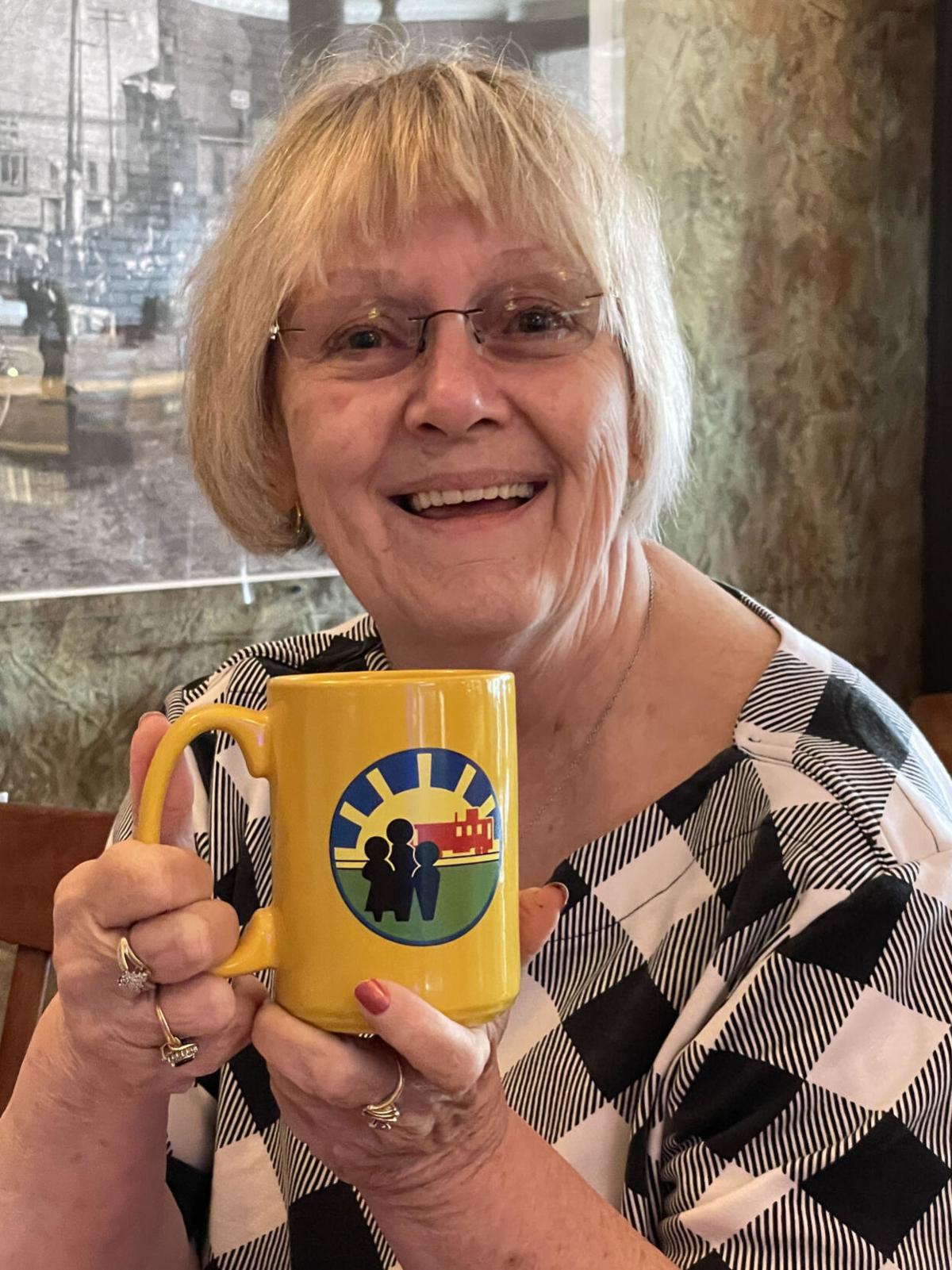 Patty Franks, the designer of the new city logo, holds a mug decorated with the logo that she created 33 years ago. 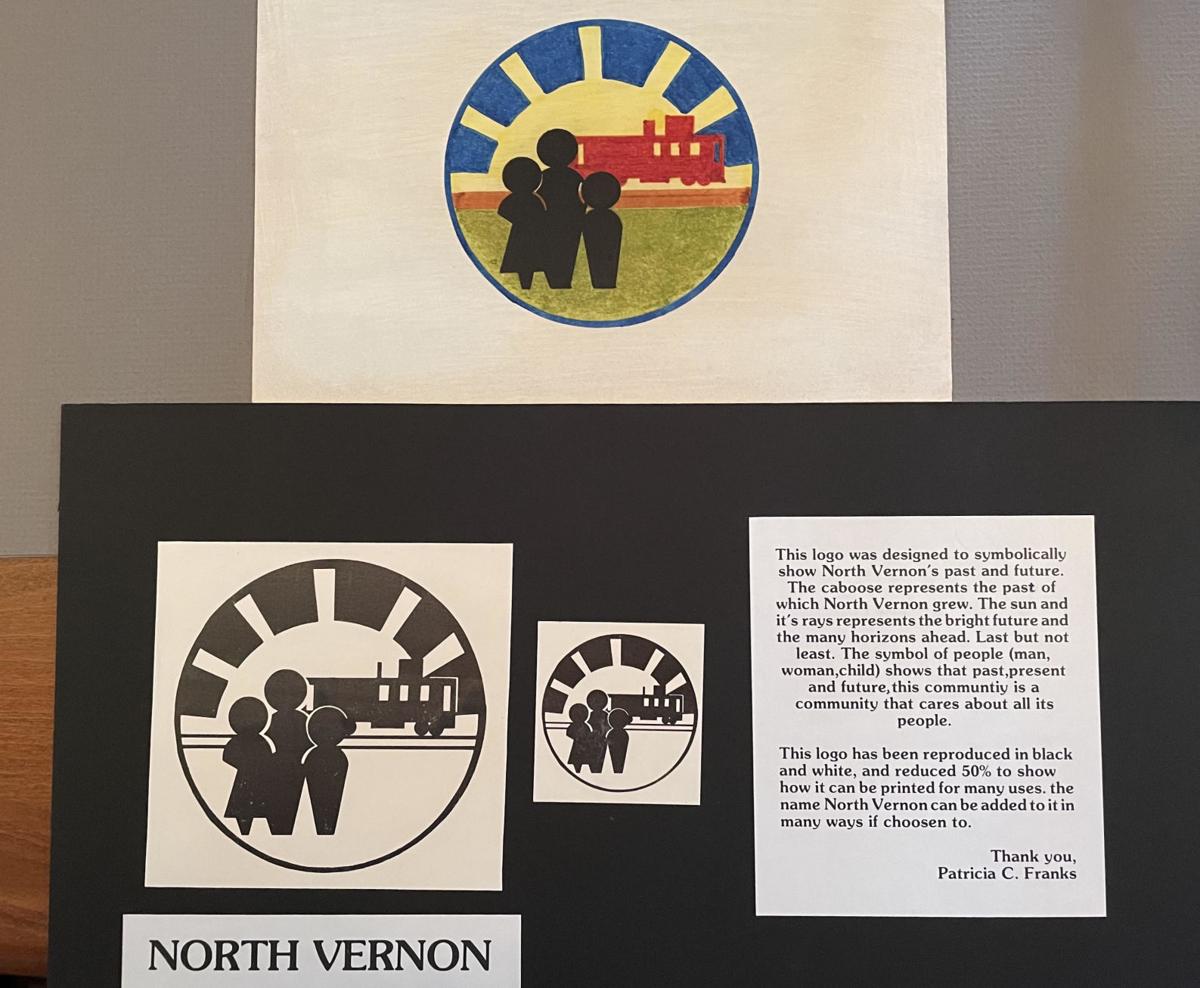 The original drawing and concept for the logo that Patty submitted back in 1988 in response to an advertisement in the North Vernon Plain Dealer is shown. 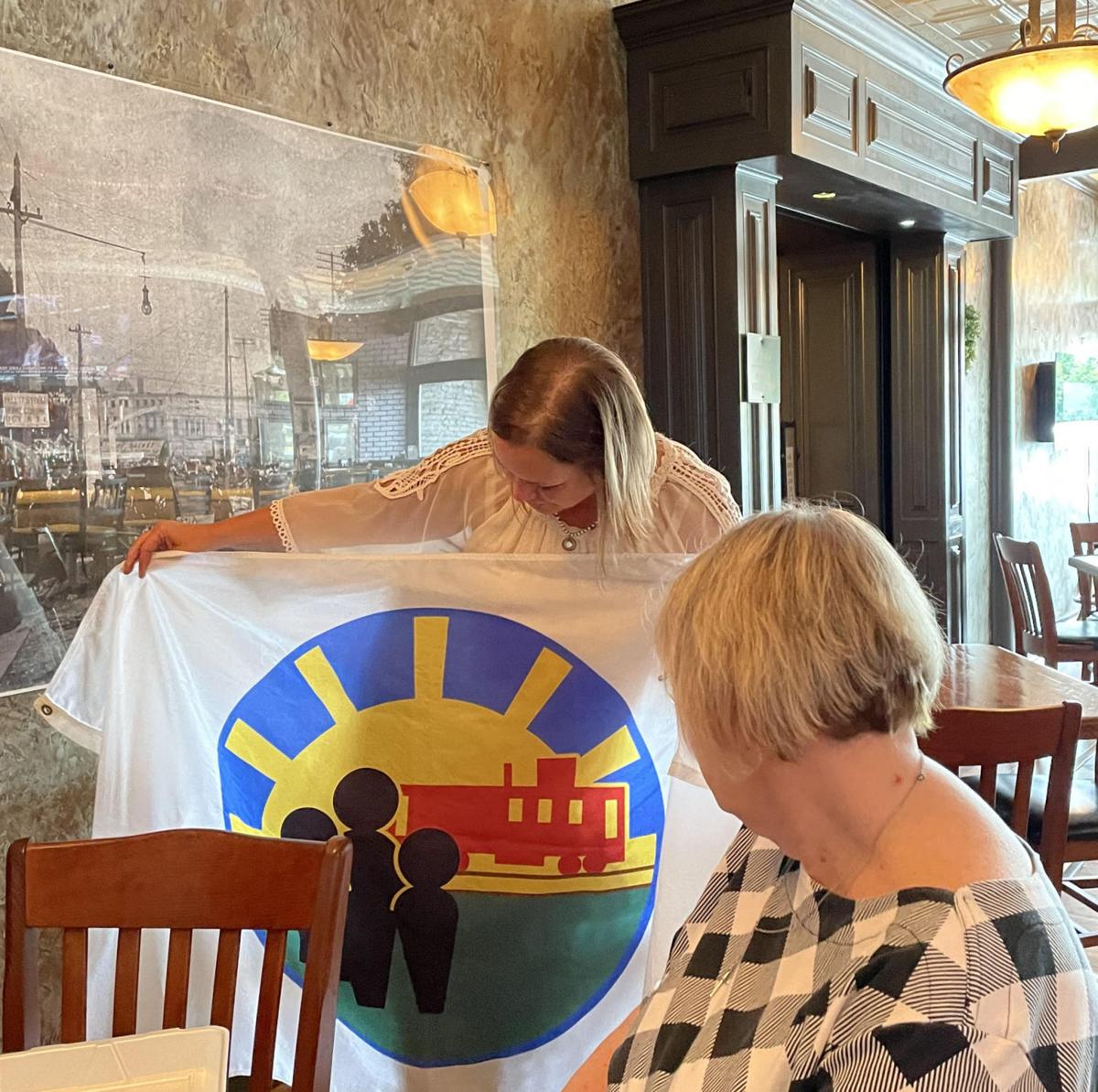 Mayor’s assistant Tanya Burnette holds up a flag with the new city logo on it for Patty to view.

Patty Franks, the designer of the new city logo, holds a mug decorated with the logo that she created 33 years ago.

The original drawing and concept for the logo that Patty submitted back in 1988 in response to an advertisement in the North Vernon Plain Dealer is shown.

Mayor’s assistant Tanya Burnette holds up a flag with the new city logo on it for Patty to view.

“The caboose represents the past of which North Vernon grew. The sun and its rays represents the bright future and the many horizons ahead. Last but not least. The symbol of people (man, woman, child) shows the past, present and future. This community is a community that cares about all its people.”

Little did Patricia “Patty” Franks know that her words, written in 1988, would manifest themselves into reality in 2021.

As the leadership and operation of the City of North Vernon, and indeed, the world, shifts into the hands of the Millennial generation, so too must the city’s brand, what it stands for and represents, must shift. As Providence would have it, that rebranding had already been created and made legal back in the 80’s, but was mysteriously tucked away, waiting to be discovered for such a time as this.

That time came in January 2020 when mayor assistant Tanya Burnette was cleaning out a closet at City Hall and she found a manila envelope stored away. Inside was a North Vernon Plain Dealer newspaper clipping from July 14, 1988, a drawing, and a Sale and Release Agreement dated Sept. 9, 1988 which was signed by former mayor Jerry Lamb, former clerk-treasurer Lulu Belle Webb and Patty Franks.

What was all of this? What did each document have to do with one another? Well, it wasn’t hard to piece the puzzle together.

The newspaper clipping announced a contest — advertised to all “starving artists” in Jennings County — offering a $50 savings bond to any local resident who could come up with a new logo for the City of North Vernon. The winning logo would be placed on a flag and flown at the police station, which was also the same building that housed City Hall at the time.

Tom Speer was the police captain at the time and was the originator of the idea. Then-mayor Jerry Lamb was quoted as wanting a logo that “depicts North Vernon.”

“It was a dedication to North Vernon, to get people interested,” Speer said years later of the contest.

Speer was an officer with the North Vernon Police Department for 24 years and is himself an artist, mostly in watercolors, and he designed the North Vernon police patch that was used during his time on the force. Despite his proficiency in art, he didn’t feel he should be the one to design a logo for North Vernon. And as previously stated, the new logo’s intent was to get the community involved.

The contest had no age restrictions, but had to be created by a Jennings County resident and submitted by August 12, 1988. Judges were Lamb, Speer, Chamber of Commerce president Susie Hall and representatives from the National City Bank and Union Bank and Trust.

The winning logo was designed by Patty Franks of North Vernon. Her original design was found in the file along with the newspaper clipping and the agreement that made the logo legal.

Patty is from Mason, OH and moved to Jennings County in 1968 with her husband, James Franks, who was a chief jailer at the sheriff’s office. The couple have four children who are all still living in the Jennings County area.

She has an associate’s degree in visual communications from Ivy Tech in Columbus and earned her teaching license from IUPUI. Patty eventually taught U.S. History to eighth graders at Jennings County Middle School. At the time of the contest, Patty was a substitute teacher and a freelance artist. Some of her work included writing calligraphy for Dove & Sharp.

In hindsight, Patty’s logo was very modern for the era as well as visionary. Logos at the time, and many that are still used today, were realistic, detailed and literal, not symbolic like Patty’s logo. Her logo has an almost cartoon aesthetic to it, with the red caboose as a symbol for North Vernon’s past as the “City of Railroads,” and the man, woman and child in black, a neutral shade to encompass all humans of all shapes, sizes, races, sexes and ages. Even the green in the logo represents growth.

Remember, this design was created back in 1988, so Patty wouldn’t have had the knowledge of North Vernon’s future mission to utilize solar energy, yet she included a yellow sun in her logo to represent the warm and bright future of the city.

The logo was made official on Sept. 9, 1988, but for some unknown reason was never put on a flag and flown at the police department as dictated by the contest advertisement. When asked why the logo never saw the light of day, neither Jerry Lamb nor Tom Speer could recall an exact reason.

Patty just assumed that they had changed their minds, that something else more conventional had been selected instead, and just let it go as a fun memory. She did say that she’s pretty sure she used the contest prize money to buy art supplies.

But for all intents and purposes, it seems the logo was too ahead of its time, and the City of North Vernon just wasn’t ready for change, not ready to be what the logo symbolized. But now, in 2021, it is.

Banners emblazoned with the new logo and the coordinating city seal were raised on Wednesday, July 14, 33 years to the day that the new logo contest was announced in the papers. On Sept. 9, the day the logo was made official for the City of North Vernon, a flag with the new logo on it will be raised at the North Vernon Police Department, just as it was meant to all those years ago.

Between now and then, interviews with the people who were involved in the logo contest in 1988 will be published, representing the past. An update on the solar panels and a Scavenger Hunt will follow in the weeks after, representing the present. Finally, in the few weeks leading up to the flag raising, there will be interviews with young community leaders who are working to bring North Vernon into the future. All of this will be symbolic of North Vernon’s shedding of the past and building towards the future, the transition from the “City of Railroads” to “The Solar City.”