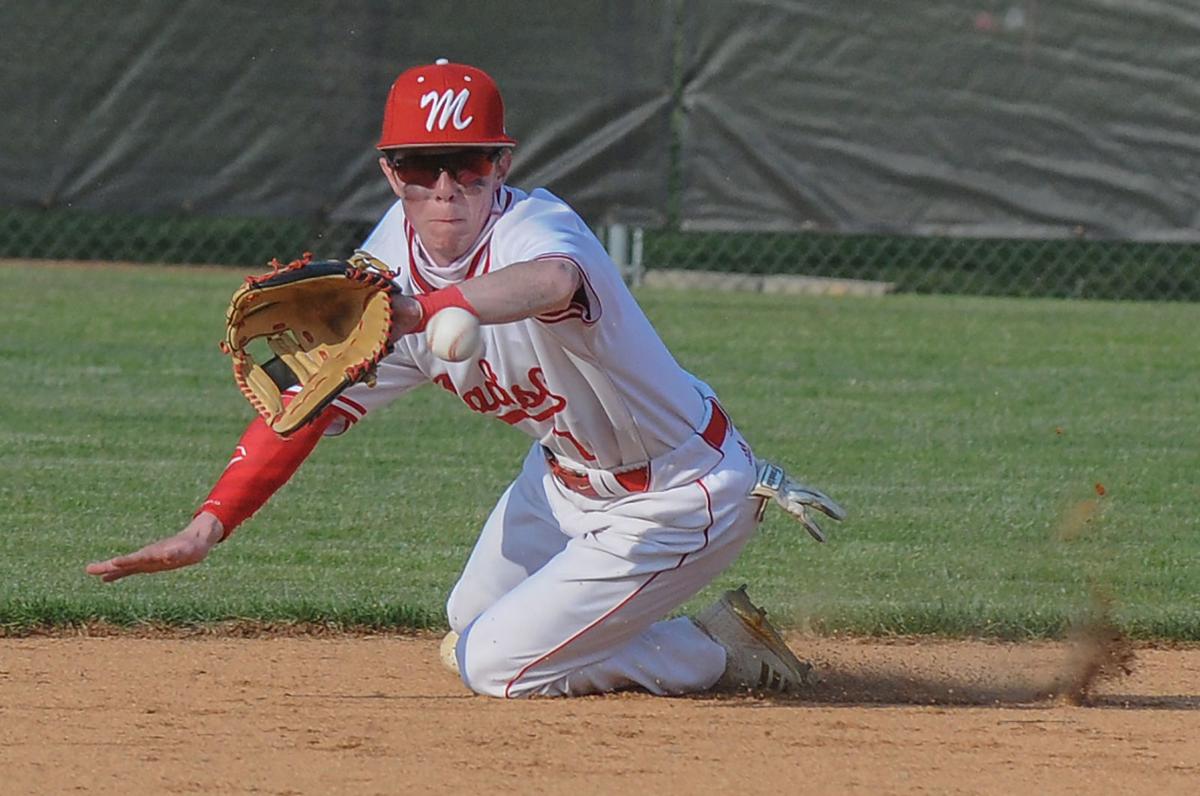 Madison second baseman Keaton Rowlett ranges far to his right to grab this line drive during the Cubs’ baseball team’s 13-3 against Greensburg in its Tuesday home opener.

Madison pitcher Zach Forner (left) attempts to tag out Greensburg runner Isaac Tebbe at the plate during the Cubs’ win at home on Tuesday. 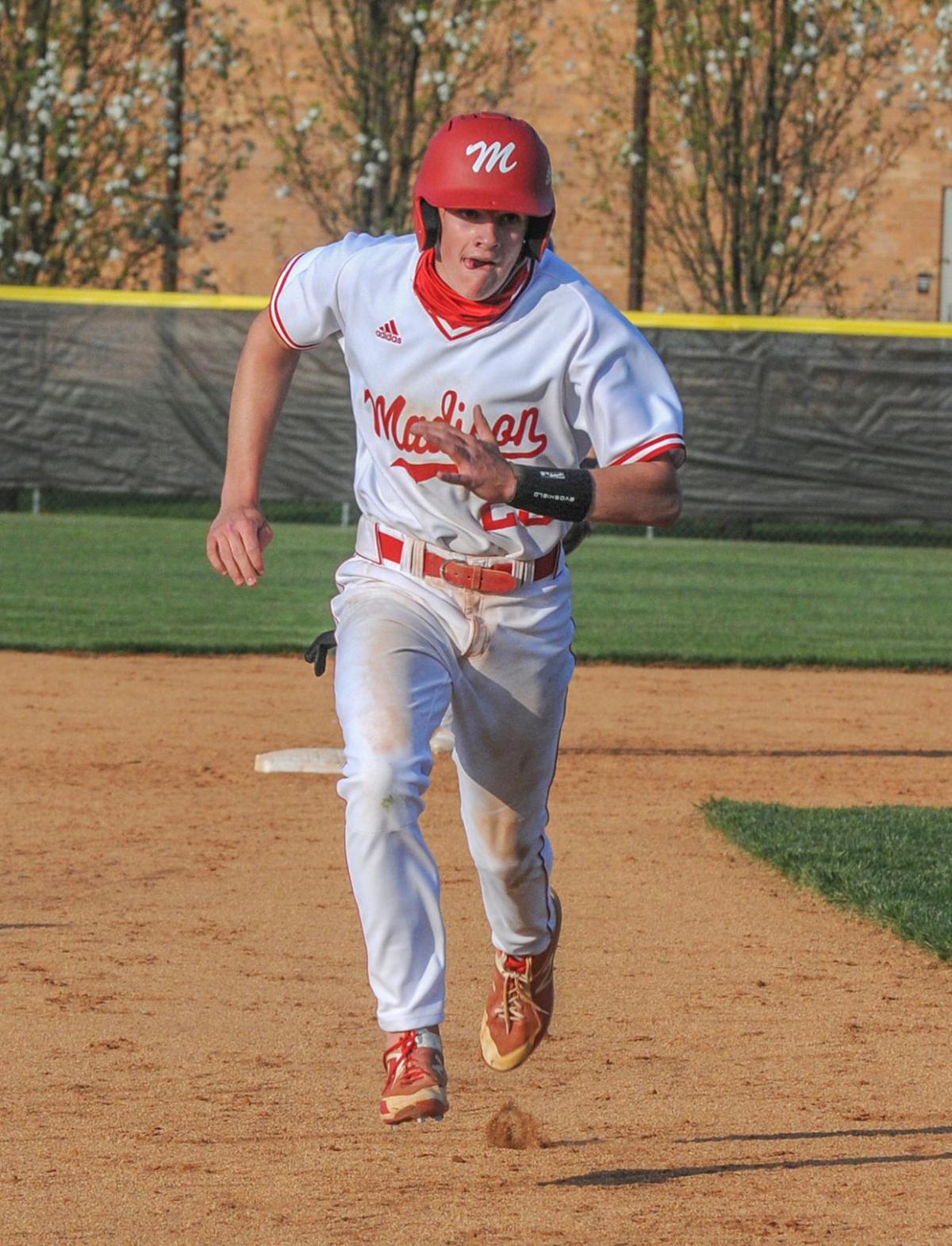 Madison’s Ben Orrill sprints around the bases during the Cubs’ win over Greensburg on Tuesday at home.

Madison second baseman Keaton Rowlett ranges far to his right to grab this line drive during the Cubs’ baseball team’s 13-3 against Greensburg in its Tuesday home opener.

Madison pitcher Zach Forner (left) attempts to tag out Greensburg runner Isaac Tebbe at the plate during the Cubs’ win at home on Tuesday.

Madison’s Ben Orrill sprints around the bases during the Cubs’ win over Greensburg on Tuesday at home.

Madison didn’t exactly put on a baseball clinic over the first two innings of its home opener on Tuesday. But by the end of the game, the Cubs looked every bit as dominant as they have been while going 6-0 over the first week of the season.

Madison shrugged off an early 3-0 deficit to roll past Greensburg 13-3 on Tuesday to remain undefeated on the season. The Cubs took the lead with two runs in the second and three more in the third and then used a 7-run fourth inning to seize control of the game. Ben Orrill’s RBI single in the fifth — his fourth hit and fifth RBI of the game — ended the game on the mercy rule.

The end result was the same as each of Madison’s previous five wins but Madison coach Tim Armstrong saw plenty of things his team needs to work on in this early season.

“We forced a little bit early compared to the way we played last week,” Armstrong said. “Defensively, I think we’re going to be all right. It’s just a matter of focusing early.”

Greensburg (1-2) didn’t hit the ball out of the infield over the first three innings but still held a 3-0 lead thanks to two infield singles, three errors, three walks, one wild pitch and several questionable decisions.

But Madison didn’t let those miscues affect it and by the time the third inning was over, the Cubs had the lead for good.

Madison (6-0) scored its first two runs of the game the way Greensburg had scored its three. After Orrill led off the inning by lacing a line drive to left, Keegan Clement walked and Luke McCarty reached on an infield single to load the bases. Orrill then scored on a fielder’s choice by Myles Barnes and an error let Clement come across.

Three more walks, a wild pitch and a two-run single by Orrill plated three runs in the third to put Madison ahead 5-3. The Cubs then blew open the game in the fourth when Zach Forner drew a bases-loaded walk, Orrill scored two with a double, Trenton Barnes brought in a run with a single, Myles Barnes knocked a two-run single and Keaton Rowlett hit a run-scoring single.

Zach Forner led off the fifth with a double, stole third and walked home on Orrill’s fourth hit to end the game.

Armstrong was pleased with the way his team responded and noted that even though it is still a young roster — six sophomores started for the Cubs — they are a veteran team in the amount of games played.

“I knew we would settle down once our bats came into it and focus a little bit,” Armstrong said. “These guys know that it’s all about competing day-in a day-out, one pitch and one inning at a time. We’re still young and we’re going to make mistakes, but good things are coming if we keep working hard.”

Madison had nine hits, nearly half of which came from the sophomore Orrill who hammered every strike he saw, going 4-for-4 with a double, five RBIs and two runs scored. Zach Forner had a double, an RBI and scored three runs.

Zach Forner also gutted out the win on the mound. Despite throwing 57 pitches through two innings thanks to the mistakes, the senior went all five and struck out seven and walked five while allowing just one earned run on two infield singles to improve to 2-0.

Madison returns to action today when it hosts Austin and then heads to Southwestern for a matchup with the Rebels on Friday. Southwestern entered Wednesday’s game against Carroll County also undefeated at 3-0.