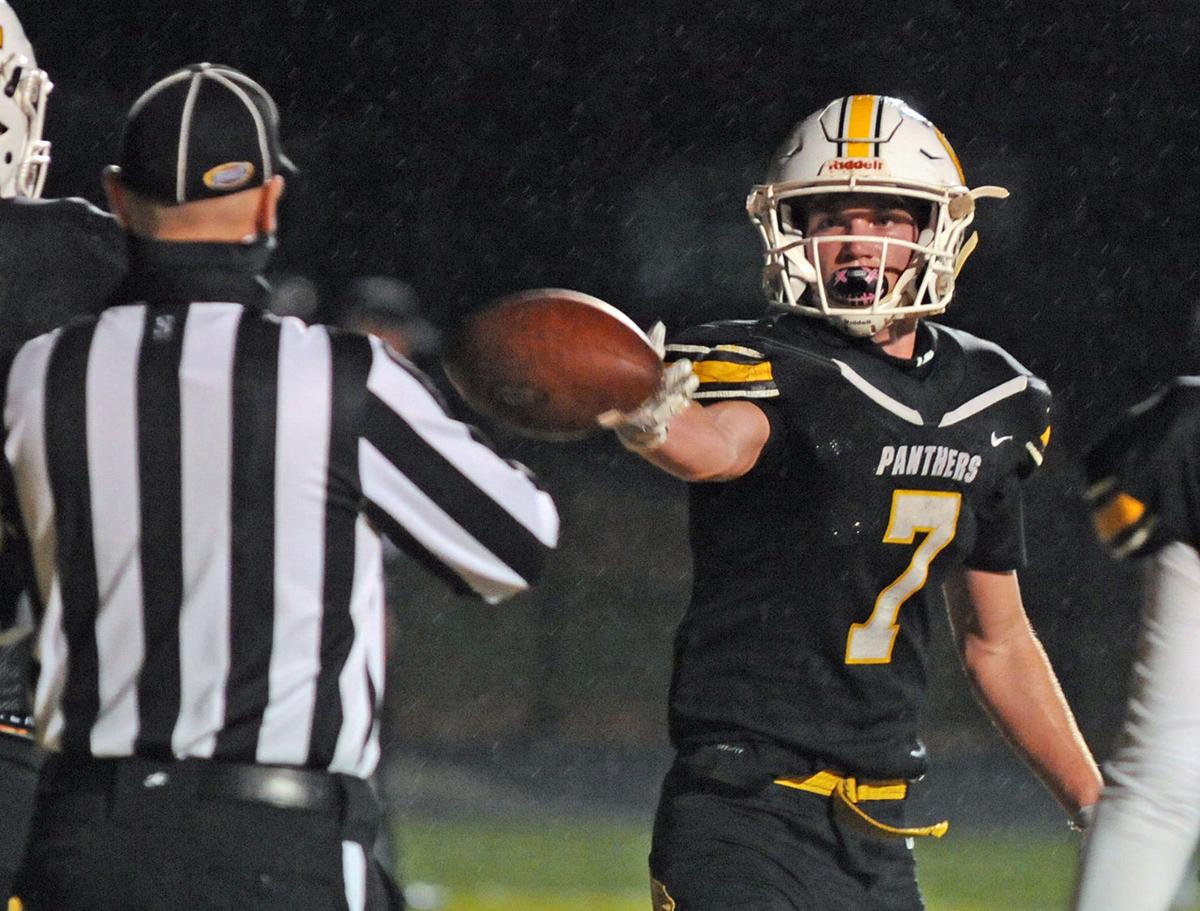 Carroll County’s Kyle Guenthner flips the ball to a game official after scoring a touchdown in the Panthers’ 46-9 victory against Gallatin County in the playoffs on Friday. 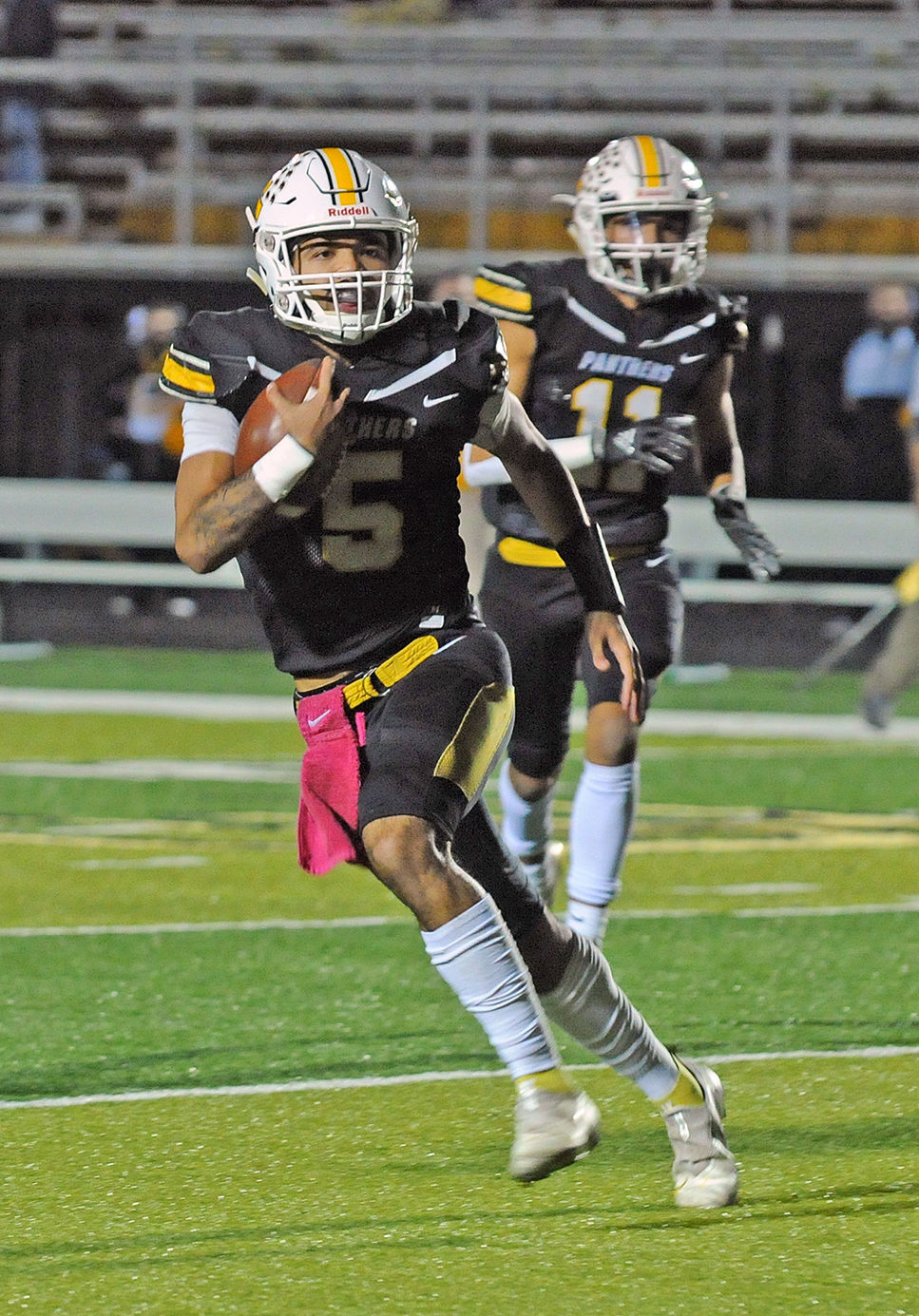 Carroll County quarterback Keishaun Mumphrey scrambles out of the pocket during the Panthers’ playoff win over Gallatin County on Friday.

Carroll County’s Kyle Guenthner flips the ball to a game official after scoring a touchdown in the Panthers’ 46-9 victory against Gallatin County in the playoffs on Friday.

Carroll County quarterback Keishaun Mumphrey scrambles out of the pocket during the Panthers’ playoff win over Gallatin County on Friday.

The last time Carroll County and Walton-Verona met on the gridrion on Oct. 2, it was a slugfest that saw the two district foes battle for four quarters before the visiting Bearcats finally escaped Carrollton with a 14-6 win.

A lot has changed in the nearly two months since that game. Now, with a district championship and a trip to the state quarterfinals on the line, Carroll is eager to show exactly how far it has come.

Carroll County (6-4) and Walton-Verona (6-4) are set for a rematch on Friday in the second round of the KHSAA’s Class 2A Gridiron Bowl playoffs in Walton. A victory will send the Panthers into the state quarters for just the second time in school history, and the first since 1985.

That loss to Walton was Carroll’s third in a four-game losing stretch which included a forfeit to Shawnee when the Panthers opted not to make the trip during the civil unrest in Louisville. The week following the loss to Walton, Carroll fell 28-13 at Lexington Sayre.

But the Panthers haven’t lost since and have ripped off a five-game win streak that was highlighted by last week’s dominating 46-9 win over Gallatin County in their playoff opener.

A passing team earlier in the season, Carroll has switched to a more run-first mentality during the win streak and the difference has been noticeable. Senior running back Kyle Guenthner rushed for 282 yards in the win over Gallatin and the team collected 365 yards against what Franklin said was the most physical team they have played all year.

“We added a couple of formations to make our game plan simple. The offense we inherited was really elaborate so we added an I-formation and went to a straight power game,” Franklin said. “That, I believe, made the difference.”

Making that engine work is Guenthner, who has put together a terrific campaign. The senior has rushed for 1,192 yards on 124 carries for an impressive 9.6 yards per carry average and has scored 19 touchdowns on the ground and 23 overall. He has caught a team-high 23 passes for 351 yards, has scored a touchdown on a kickoff return and leads the team in interceptions with two while collecting 50 tackles.

“You can’t replace a kid like Kyle Guenthner. He’s been that way all year,” Franklin said. “We have a couple juniors who can get close to what he has been doing, but golly, he has been unbelievable. And on top of being a good football player, he is a great kid.”

Senior Keishaun Mumphrey has stepped into the quarterback role after an injury to Harrison Felts and has added another dimension to the Panthers’ game. Mumphrey was 8-of-10 passing for 108 yards against Gallatin and his second on the team in scoring with six touchdowns and three two-point conversions. Carroll’s defense has also buckled down and allowed only 23 points during the five-game win streak. Senior Clayton McAllister has recorded 83 total tackles, including 13.5 for a loss, while sophomore Kenyion Mumphrey has 44 total tackles — 14.5 for a loss — and 4.5 sacks.

Walton-Verona features a balanced offense and plenty of weapons. Junior quarterback Trey Hatmaker has completed 59 of 117 passes for 854 yards and nine touchdowns while junior running back Jacob Gaines leads the team on the ground with 593 yards on 79 carries and nine touchdowns. Juniors Jonathan Freeman and Wiley Baker have rushed for 320 and 287 yards, respectively. Senior Colton Shawver has caught 33 passes for 455 yards. Senior lineman Dawson Catlett leads the Walton defense with 61 total tackles — 17.5 for loss — and 6.5 sacks.

The winner of the game will take on either Beechwood (6-3) or Lloyd Memorial (4-2) in the state quarterfinals next week. Walton has reached the quarters each of the last two years, including a trip to the state semifinals two years ago.

Information for this story was also gathered by Rob Lafary