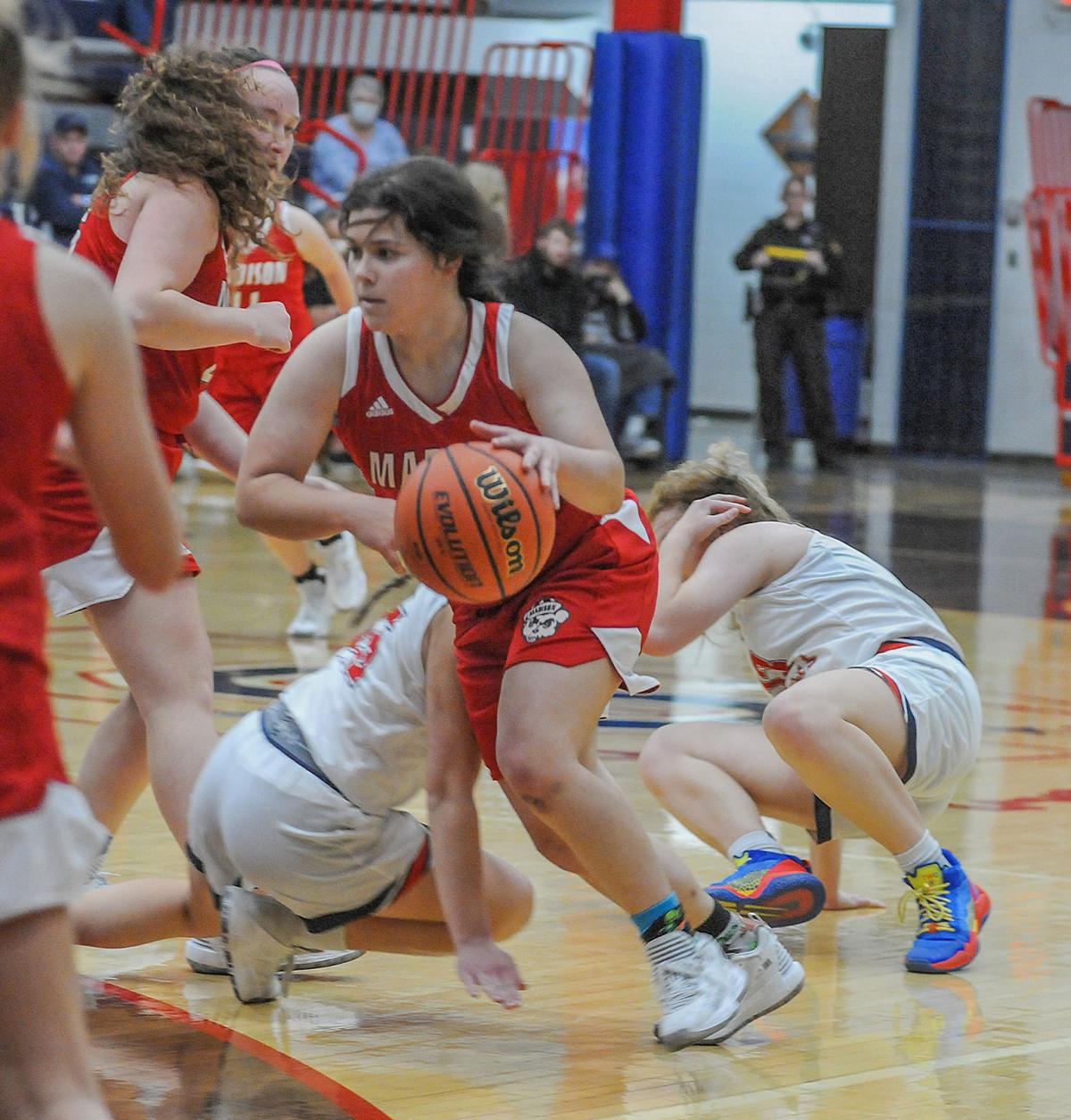 Madison’s Cam Mann (with ball) works her way to the basket during the junior varsity Turkey Shootout on Monday. 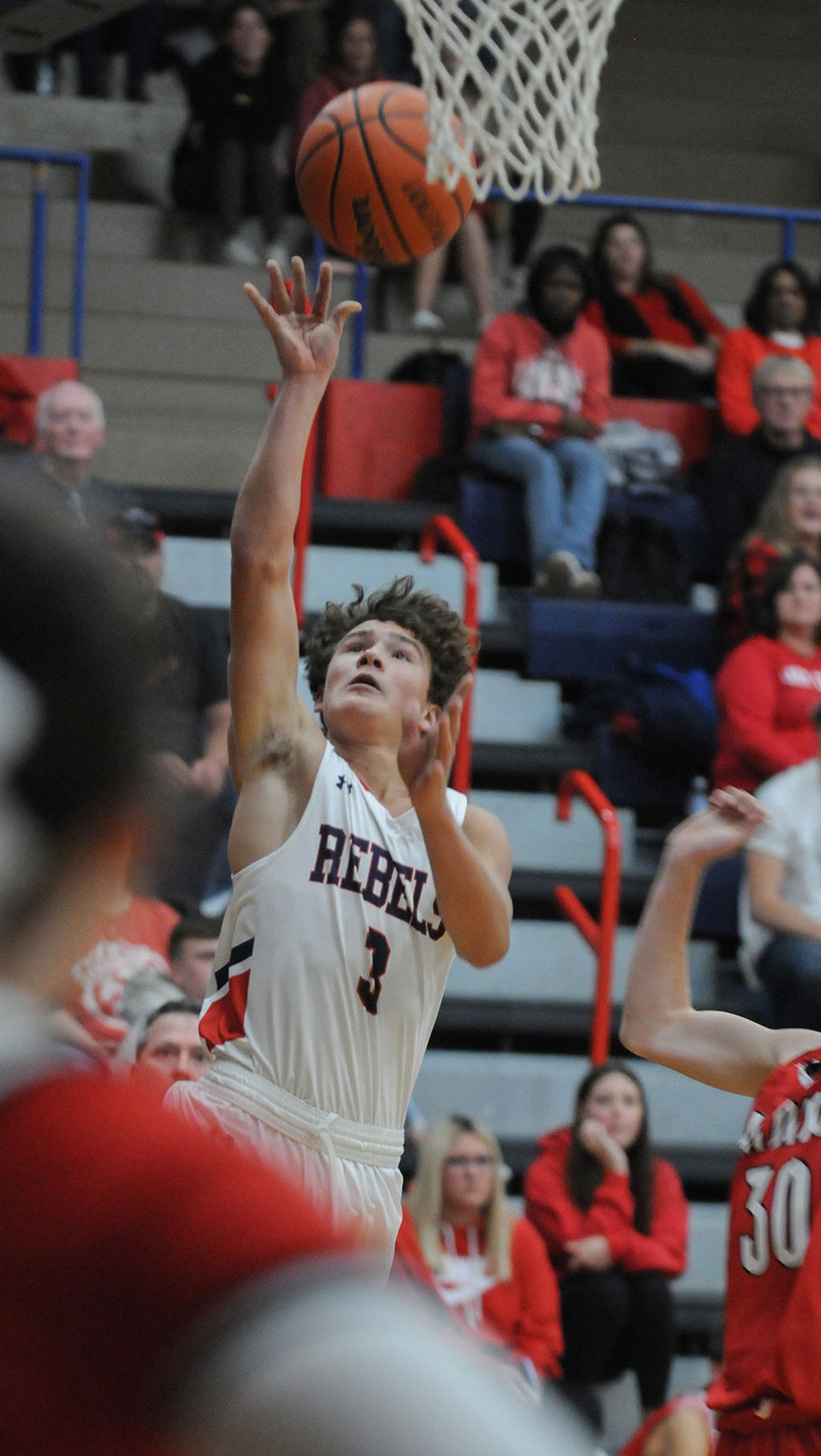 Southwestern’s Peyton Cloud glides into the basket for two of his 31 points in the Rebels’ win over Madison in the boys portion of JV Turkey Shootout on Monday.

Madison’s Cam Mann (with ball) works her way to the basket during the junior varsity Turkey Shootout on Monday.

Southwestern’s Peyton Cloud glides into the basket for two of his 31 points in the Rebels’ win over Madison in the boys portion of JV Turkey Shootout on Monday.

The junior varsity portion of the annual Turkey Shootout ended up being a split decision with Madison winning the girls game 45-32 and Southwestern running away with the boys win 65-34 Monday in Hanover.

The annual event was canceled last year due to COVID restrictions. The varsity games will be played on Wednesday, also in Hanover.

A look at each game:

MADISON 45, SOUTHWESTERN 32 (Girls) — Madison led the entire game but still didn’t pull away until the fourth quarter to post the 45-32 win in the girls part of the junior varsity Turkey Shootout.

After the Cubs jumped out to a 7-0 lead, Southwestern recovered to tie the game 9-9 with 5:41 left in the second quarter on a 3-pointer by Hannah Sampson.

But Madison’s Bailey Owens answered that trey with a trey of her own and the Cubs closed the half in a 13-4 run take a 22-13 lead into the lockerroom.

Cam Mann drained a 3-pointer for Madison to open the third to push the lead to 25-13 and the Cubs increased that margin to 30-16 on a Mann three-point play midway through the third.

The Cubs were on the verge of blowing open the game but the rout never happened. Southwestern began chipping away, closing the gap to 35-26 by the end of the third quarter and to within 35-30 on a Jenny Tankersley basket early in the fourth.

Madison then used the free-throw line to keep the Rebels at bay. Lilli Sullivan hit four free throws to put the Cubs back up by nine and, after a Syrenia Hardy made basket, Madison closed the game with six-straight points — two each by Caity Dailey, Mann and Bailey Owens — to finally put the game away.

Mann paced all scorers with 15 points while Dailey scored 13, Owens had 10 and Sullivan scored seven. The Cubs were 11-for-16 from the foul line and they committed 13 turnovers.

Tankersley had 12 points for Southwestern while Sampson scored six, Riley Scroggins added five, Hardy had four, Breona Brawner and Ximena Vilchis had two each, and Cadence Long had one. The Rebels were 8-of-12 at the free-throw line and had 14 turnovers.

Madison returns to action on Wednesday, Dec. 1 when the Cubs head to Floyd Central. Southwestern’s next jayvee game will be on Tuesday, Dec. 7 when the Rebels travel to Milan.

SOUTHWESTERN 65, MADISON 34 (Boys) — Southwestern jumped out to a great start and never looked back, rolling to a 31-point win in the boys’ part of the jayvee Turkey Shootout.

Madison hit only three shots from the field over the game’s first seven and a half minutes while turning the ball over eight times. Southwestern, meanwhile, spent the first quarter warming up and by the third quarter, the Rebels were humming on offense.

Southwestern led 12-4 after the first quarter then used a 15-0 run in the second to open a 27-6 lead. Madison recovered slightly to stop the bleeding, but the Rebels still took a 31-13 lead into halftime.

The third quarter was where the Rebels blew open the game. Led by sophomore Peyton Cloud, who scored 16 of his game-high 31 points in the seven-minute frame, Southwestern ripped off 24 points to build a 30-point lead. Cloud’s off-balance 25-foot 3-pointer at the buzzer gave the Rebels a 55-24 at the end of the quarter.

Southwestern’s lead reached as many as 35 (65-30) late in the game before Madison scored the last four points.

Cloud was the only Rebel to score in double figures but the team had eight different players hit the net. Will Stockdale scored nine points, Daylan Konkle had seven points, Jackson Taylor had six points, Landon Kidwell had five, Braiden Smith scored three points, and Claytin Sontag and Aiden Haase scored two each.

Madison turned the ball over 21 times in the game compared to 12 by Southwestern. The Rebels were also 15-for-21 at the foul line while the Cubs were 10-of-15.

Southwestern heads to Clarksville on Tuesday while Madison travels to Jennings County on Friday, Dec. 3