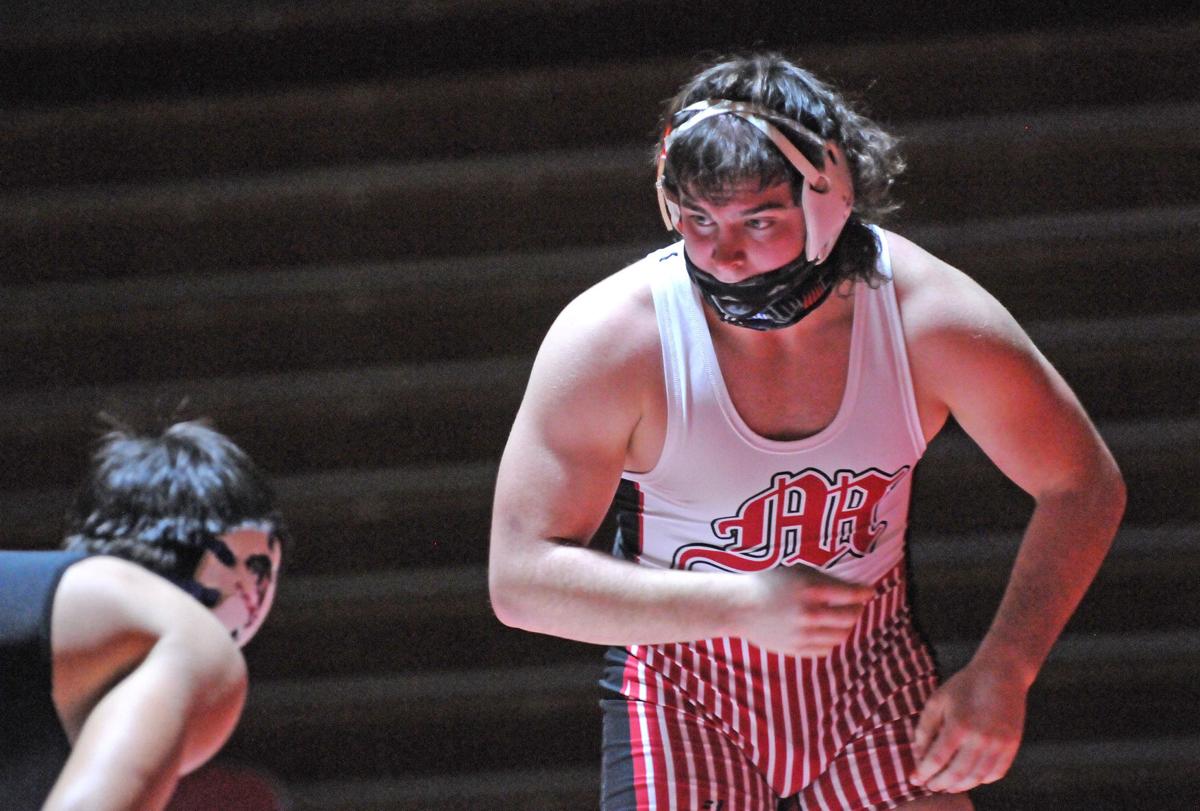 Madison’s Dalton Berry sizes up his opponent, Jennings County’s Zane Ortlieb, during the championship at 195 pounds in the HHC meet at Madison on Saturday. 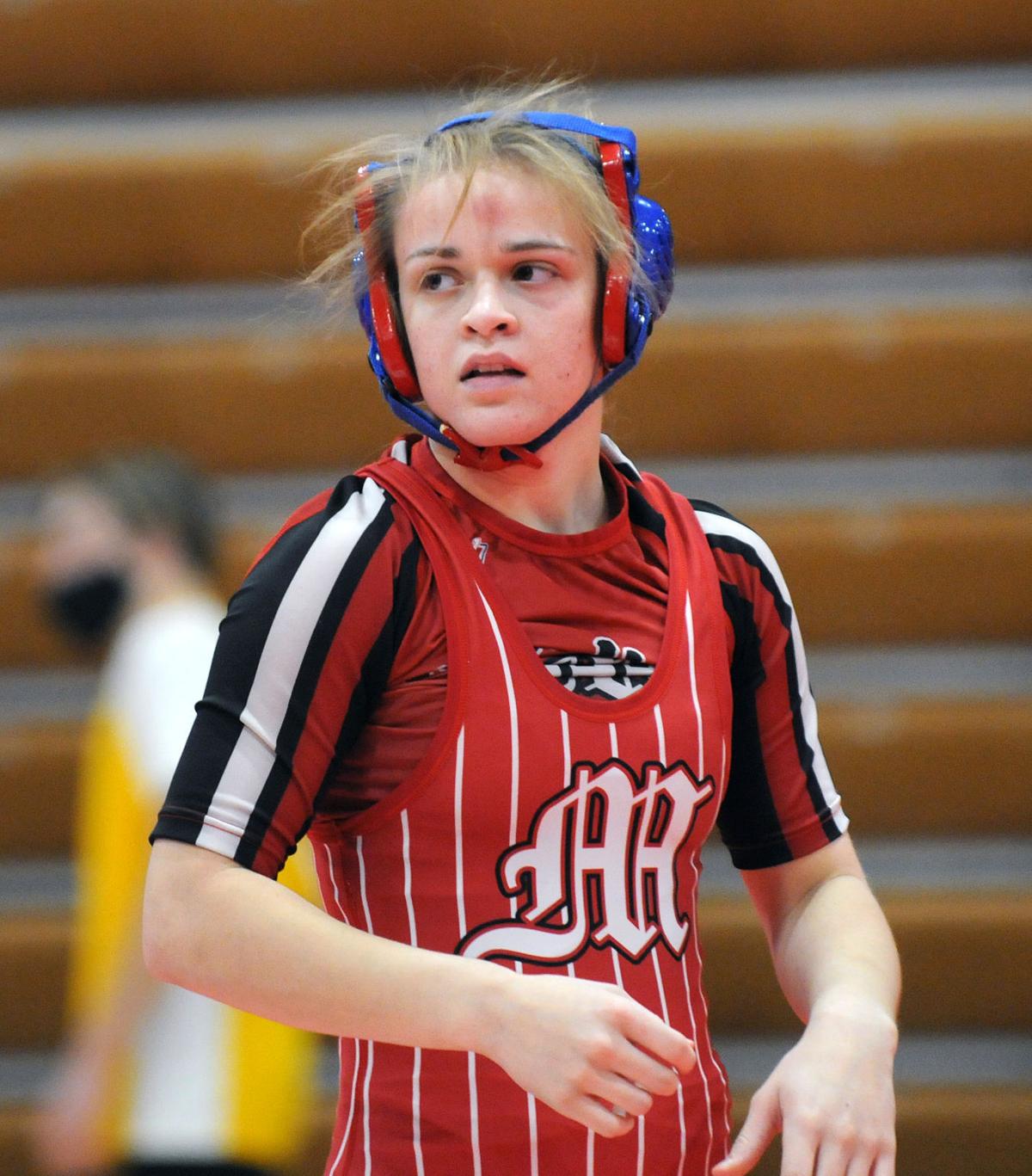 Madison senior Kelsey Bilz had a big weekend for the Cubs, placing second at the IHSWCA Girls Regional on Friday and third in the HHC meet on Saturday.

Madison’s Dalton Berry sizes up his opponent, Jennings County’s Zane Ortlieb, during the championship at 195 pounds in the HHC meet at Madison on Saturday.

Madison senior Kelsey Bilz had a big weekend for the Cubs, placing second at the IHSWCA Girls Regional on Friday and third in the HHC meet on Saturday.

Madison, which will leave the conference it helped found after the season, had three wrestlers — Jace Walls (120 pounds), Noah Burkhardt (126) and Dalton Berry (195) — finish as runners-up in the HHC meet to earn all-HHC honorable mention selections. As a team, the Cubs scored 171 points, behind conference champion Columbus East (273.5), Floyd Central (220) and Jeffersonville (200.5) but ahead of Jennings County (102), New Albany (98.5), Seymour (76) and Bedford North Lawrence (74).

“Overall I am glad to see us back in the top tier of teams at the HHC but I know we have a lot of room to improve,” Madison coach Tyson Skinner said.

Bilz, who is ranked second in the state among girls at 106 pounds, lived up to that billing at the regional. After receiving a bye in the quarterfinals, she quickly dispatched sixth-ranked Cora Cain of Hamilton Heights by pin in 20 seconds before falling to top-ranked Mackenzie Smith of Heritage Hills by fall in 5:25 in the championship.

Bilz will get another shot at Smith on Friday in the state finals at Hamilton Heights.

“Kelsey wrestled extremely well but we still have some things to work on,” Madison coach Tyson Skinner said. “She is really opening up and getting a little more dangerous on her feet.”

The Cubs’ Ally Zuckschwerdt competed at 138 pounds and placed sixth, missing the state finals by two places. After losing her first match, Zuckschwerdt rebounded with three-straight wins before falling 8-4 to Josie Hause of Monrovia in the fifth-place match.

“Ally had the second largest bracket at the south regional. Despite a first round loss, she battled back for a hard fought sixth place finish,” Skinner said. “For a first-year wrestler, she is picking it up super quick. I love her work ethic and her never say die attitude.”

Bilz also wrestled on Saturday in the HHC meet, placing third at 106 pounds. After getting a forfeit in the first round, she suffered a loss in the semifinals but battled back to pin Jeffersonville’s John Stivers in 2:10 to claim third.

“Dalton had a lot of adversity in his path this week. Forced to miss the last couple days of practice due to close contact quarantine took a toll on his tank today,” Skinner said. He still went out and gave it his all. I can’t imagine how tough it must be to wrestle in a mask.”

Two other Cubs, Van Skinner and Emmett Wilhite, placed third. Skinner, ranked fourth in the semistate at 170 pounds, lost 12-4 to third-ranked Codei Khawaja of Floyd Central in the semifinals but battled back to claim third. Willhite lost his first match of the day to Columbus East’s Tony Ruiz-Tapia at 138 pounds by a fall in 5:54, but battled back and pinned Ruiz-Tapia in 3:00 in the rematch to finish third.

Madison hosts Southwestern on Wednesday and then hosts the Nick Shadday Memorial on Saturday.