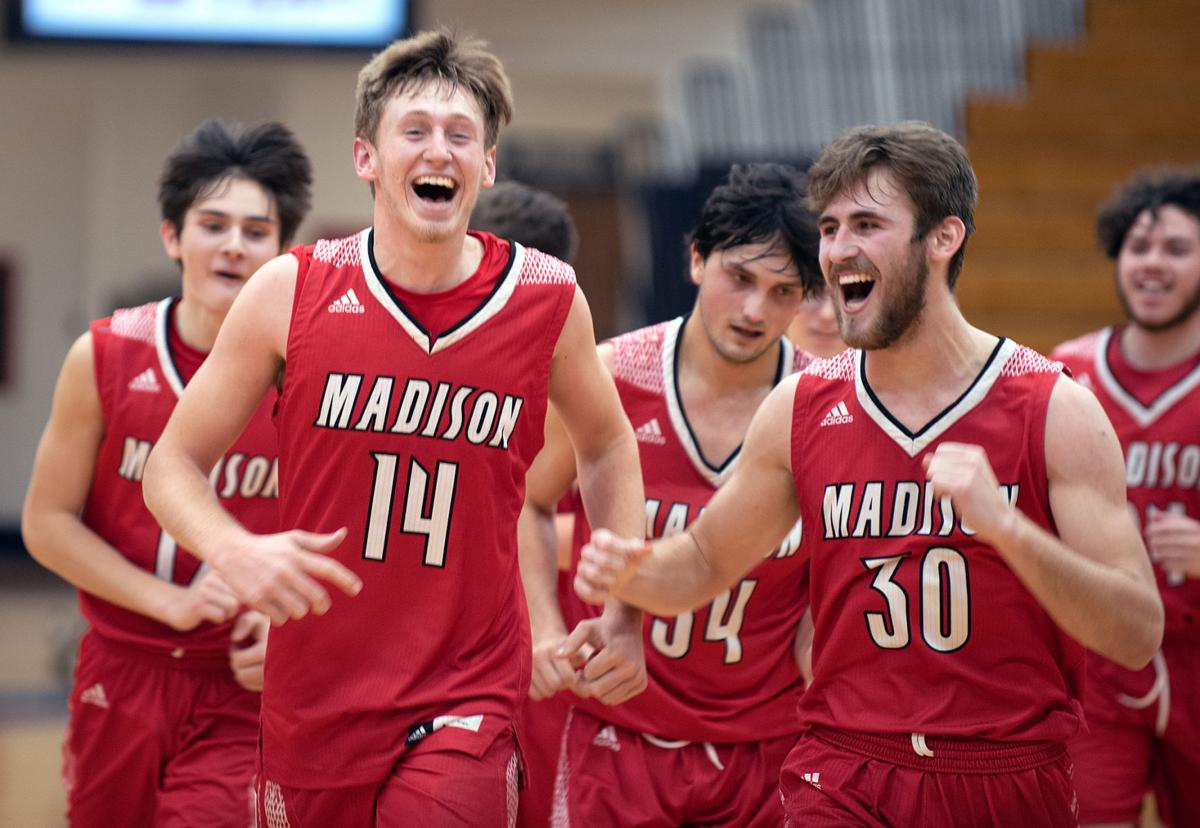 Madison’s Luke Ommen (14) and Parker Jones (30) celebrate after Ommen hit the game-winner in the Cubs’ 54-52 overtime win at Bedford North Lawrence on Tuesday. 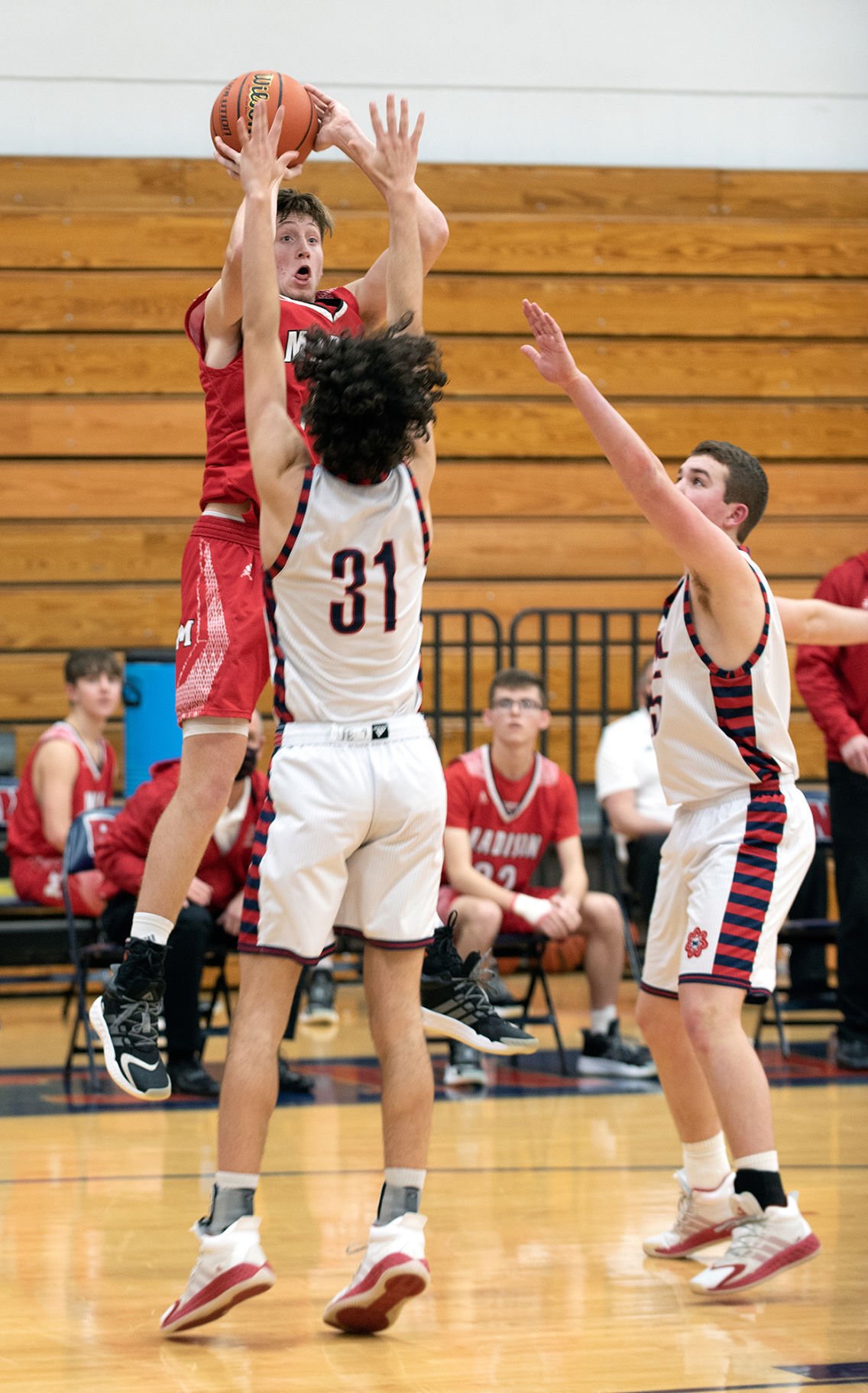 Madison’s Luke Ommen (with ball) puts up the game-winner over Bedford North Lawrence defender Jackson Miracle (31) during the Cubs’ 54-52 overtime win on Tuesday.

Madison’s Luke Ommen (14) and Parker Jones (30) celebrate after Ommen hit the game-winner in the Cubs’ 54-52 overtime win at Bedford North Lawrence on Tuesday.

Madison’s Luke Ommen (with ball) puts up the game-winner over Bedford North Lawrence defender Jackson Miracle (31) during the Cubs’ 54-52 overtime win on Tuesday.

BEDFORD — Luke Ommen drained a turnaround baseline jumper at the buzzer to lift Madison over Bedford North Lawrence 54-52 in overtime in boys basketball on Tuesday.

Ommen’s basket helped erase the pain of Madison blown double-digit lead and allowed the Cubs to open Hoosier Hills Conference play with a win in their final season in the league. And it came in a contest where Madison wasn’t at its shooting best, either at the foul line or from the 3-point arc.

The Cubs hit only two of nine 3-pointers attempted in the game and were an ice-cold 10-of-19 from the foul line. But at the end of the game, Madison was celebrating a win and coach Sherron Wilkerson was pleased to see his squad rise to the occasion.

“We overcame it tonight because we guarded and rebounded,” Wilkerson said. “It’s always tough to win in Bedford and there were several times we let it get away. Coach was upset, but they responded to the challenge.”

Madison (8-2, 1-0 HHC) jumped out to a 14-3 lead to open the game but after that quick start, the Cub offense ground to a halt for much of the game and points became harder and harder to come by. Madison still led 27-18 at halftime but Bedford came back to tie the game 38-38 at the end of the third quarter.

The final quarter and the overtime were both played close to the vest as neither team could hold an advantage. Kooper Staley drained a 3-pointer for the Stars with 1:58 to play in regulation to tie the game at 46-46 and the Cubs turned the ball over on their next possession. But a terrific defensive stand by Madison over the final minute left only a desperation shot by the Stars and the game headed to overtime.

Bedford North Lawrence (4-6, 1-1 HHC) briefly took the lead in the overtime on a Colten Leach layup but a Nick Center free throw tied the game. Luke Miller hit two free throws with 17 seconds to go to give Madison a 52-50 lead but Staley was fouled on the other end and hit both shots to again tie the game with eight seconds to go.

Opting to go without a timeout, Madison inbounded the ball and immediately went to work. Miller, a senior, brought the ball up the floor and nearly lost it at the 3-point line, before finding Ommen along the baseline to get him the ball. The pass was off target and Ommen was forced to turn his back to the basket in order to get the ball, but he quickly turned and fired over BNL’s Jackson Miracle, sinking the shot as the buzzer went off.

“We told them in our last huddle that if (BNL) scores, immediately get the ball and take it to the rim. I didn’t call timeout because I kind of thought that if we called timeout they would set their defense,” Wilkerson said. “This was one of those situations where we had complete trust in the players. We had a senior with the ball who made the right decision at the end.”

Miller finished the game with 21 points to lead all scorers while Center had an impressive double-double of 14 points and 14 rebounds to go with five assists. Ommen scored 12 points and had four rebounds for the Cubs, who shot 47% (21-for-45) overall for the game and had just nine turnovers.

Madison now heads to New Albany on Friday to take on a Bulldog squad that the Cubs have not beaten since the 1998-99 season, a span of 21-straight games. New Albany, which stands at 7-3 on the season, appears to be more vulnerable than in recent seasons but as Tuesday’s 79-54 win over Class 2A No. 10 Southwestern shows, the Bulldogs are still a very formidable opponent.

Wilkerson knows that Friday’s game will serve as a measuring stick for his team which is desperate to show that it belongs among the state’s best.

“(Bedford) is a very difficult place to win and this was the shot in the arm that our program needed at this particular time and now we need to capitalize on it,” Wilkerson said. “For us, this is a very emotional time. We’ve been in this conference since the beginning and this is our last go-around. We’ve talked with the guys about what will our legacy be and we have a chance right now to impact that.”