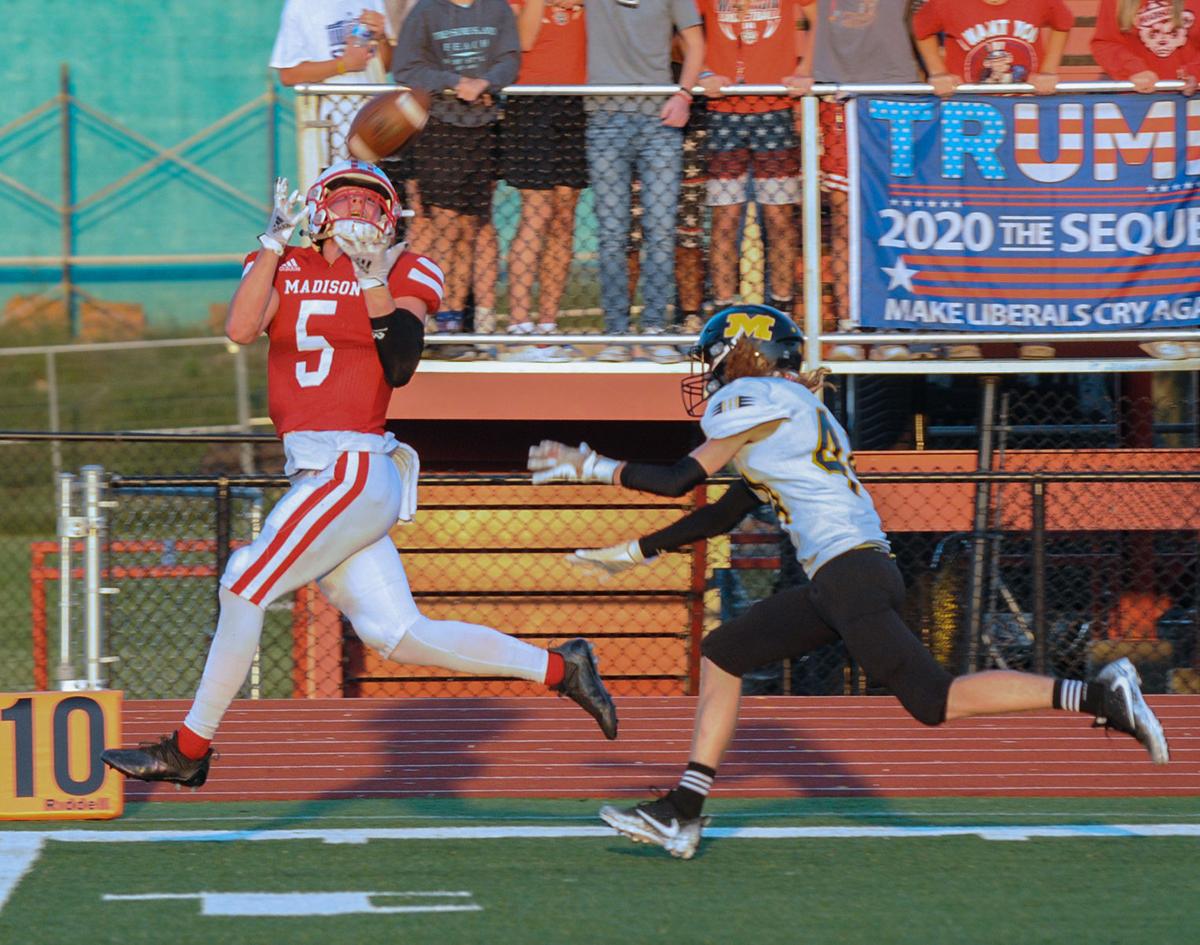 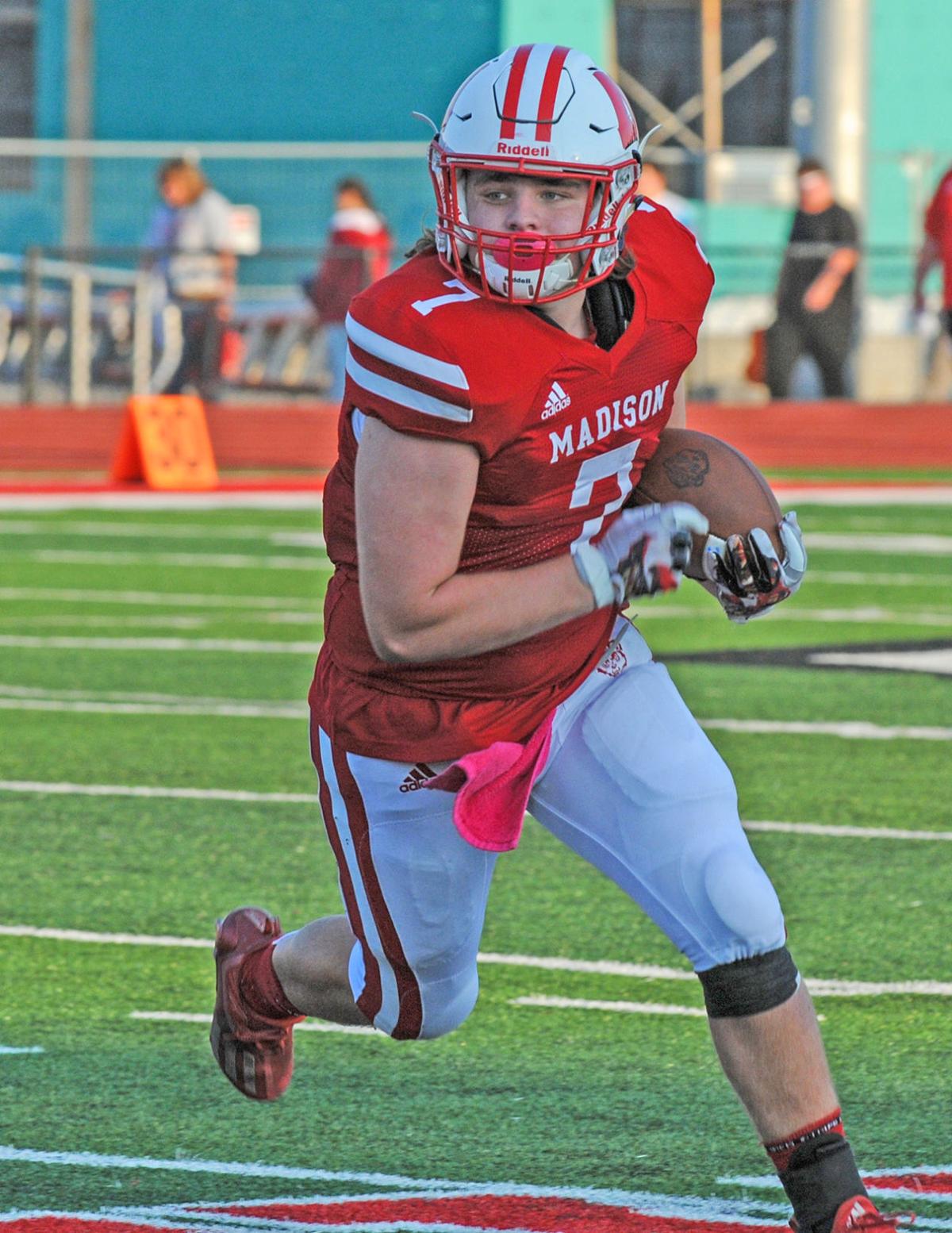 Madison’s Garrett Gatke (7) carries the ball during the Cubs’ win over Milan on Friday.

Madison’s Garrett Gatke (7) carries the ball during the Cubs’ win over Milan on Friday.

Madison football built a big first-half lead then survived a slew of injuries in the second half to score a 36-19 win over Milan on Friday in the first-ever meeting between the two schools.

The Cub offense was unstoppable in the first half, scoring on four of six possessions and adding a defensive score while building a 36-7 lead by halftime. But an injury to quarterback Kaden Oliver late in the second quarter, and another to receiver Drew Hayden in the first quarter, ground Madison’s offense to a halt.

Madison finished the game with just 211 yards total offense, nearly all of that in the first half and Milan scored two touchdowns in the second half to make the game interesting even though the Cubs were never truly threatened.

Madison coach Leroy Wilson has preached all three phases of his team working in unison and the Cubs showed that on Friday.

“Offense played well, defense played well and the special teams was fantastic. We blocked two kicks tonight,” Wilson said. “Special teams is as important as the other two and they showed that tonight. I’ve got to give coach (Patrick) Maschino credit, he had a great game plan.”

Milan (1-3) opened the game with single coverage on Madison receiver Colin Yancey and the junior made them pay on a long catch that set up a 1-yard touchdown run by Oliver and a 56-yard score of his own.

In between, Avery Darnell intercepted a Braydon Rohrig pass and took it back 15 yards for a touchdown. Couple those with three Jack Kelsey extra points and the Cubs led 21-0 at the end of the first quarter.

“We took what they gave us and if you’re going to single cover (Yancey), we’re going to throw it to him every time,” Wilson said.

A blocked punt by Van Skinner set up Madison for another score — a 4-yard run by Garrett Gatke — to put the Cubs ahead 28-0 early in the second.

One of the few mistakes Madison made came on its next possession when the Cubs were forced to punt and Dylan Dirksen shanked his attempt to give Milan the ball on the Madison 15. Riley Johnson then scored on a 6-yard run to finall put the Indians on the scoreboard.

Madison (2-2) shrugged off that miscue later in the quarter when Gatke got his second touchdown, this one on a 13-yard run. Cam King picked up the two-point conversion and Madison held a 36-7 lead.

Although Madison was cruising, problems were already developing. Oliver injured his hip on a run during that final drive and King took over at quarterback. Wrapped and iced, Oliver spent the rest of the game on the sideline.

The injury, coupled with Hayden lacerating his thumb in the first quarter and needing stitches, took away two of the Cubs’ three-best offensive players so Madison was unable to sustain any drives over the final two quarters.

Milan, meanwhile, was able to put two scores on the board over the final 24 minutes — a 1-yard touchdown by Rohrig late in the third and a 45-yard interception return for touchdown by Logan Burton with just 32 seconds left in the game.

Oliver finished the game just 6-of-8 passing for 108 yards and a touchdown through the air and just six yards rushing on the ground. Gatke had 71 yards on 22 carries and two scores while Yancey had five catches for 99 yards.

Madison travels to Jennings County for the annual Battle of the Railroad contest against their former Hoosier Hills Conference rivals. The Cubs have won three out of the last four matchups between the programs.

“It’s rivalry week and other than sectional week, this is the most important week of the season,” Wilson said. “It’s a huge game for us, huge game, and we can’t wait.”