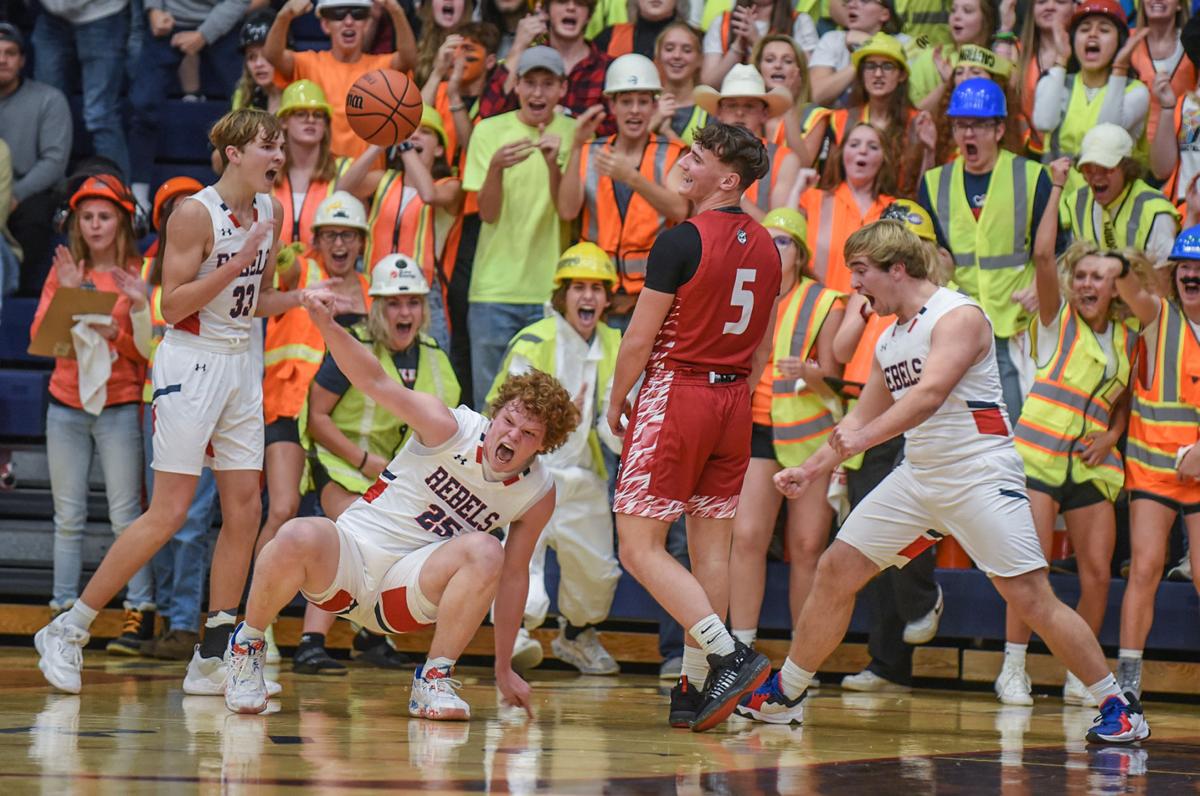 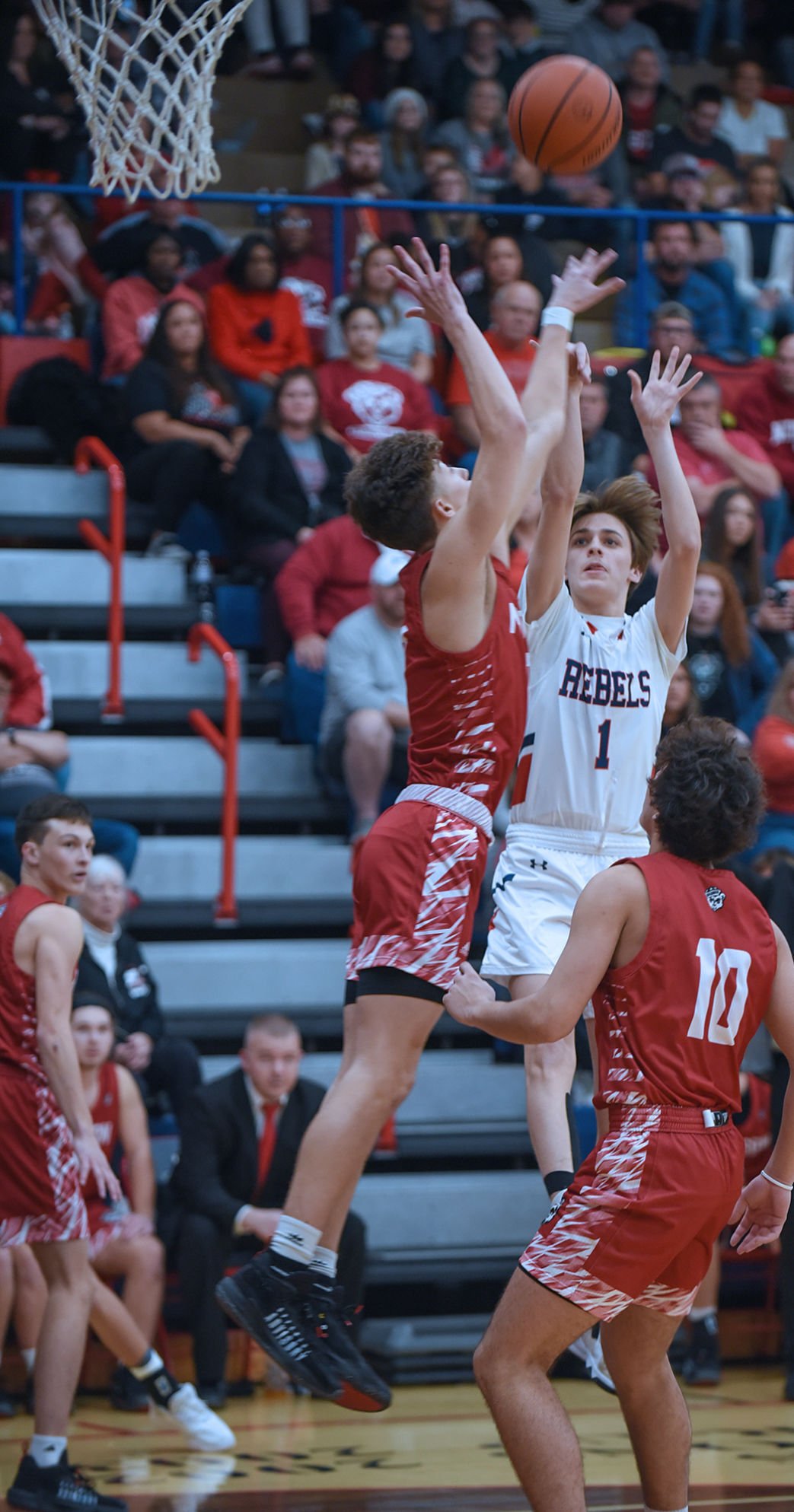 It was only one game, but any doubts about whether Southwestern could maintain its high standards after losing four starters have been erased.

Despite graduating four starters off of a 22-win, regional runner-up team, Southwestern looked as potent as ever, pulling away in the second quarter and rolling to an 82-61 win over Madison to claim the Old Oaken Bucket for the fourth time in the past five years.

The Rebels scored nearly at will, shooting 59% (31-for-53) overall from the floor, including 7-of-15 from the arc. Southwestern also forced 21 Madison turnovers and held high-scoring guard Kaden Oliver to just nine points on 4-of-16 shooting.

It was exactly the performance that Zach Cole expected. The Southwestern senior, and only returning starter, knew that his team had what it took to still be as good as it has been.

“I think we knew it. Obviously there’s a lot of questions with losing the seniors, but we’ve worked hard this offseason,” said Cole, who scored 17 points, had six rebounds and five assists. “It was their first Turkey Shootout and it’s an incredible atmosphere. I was just really proud of how they played and I think showed a lot of people tonight. Credit Madison, they’re a great team. It’s always a fun rivalry with them.”

Madison led 6-2 briefly after Henry Grote knocked down a pair of 3-pointers to prompt a quick Southwestern timeout. With the adjustment made, coach Zac Nussbaum sent his team back onto floor and they went to work.

Mitch Mingione hit a 3-pointer of his own to get the Rebels going and jump-start a 21-4 run. By the end of the quarter, Southwestern held a 23-10 lead.

Madison recovered enough to get the margin back down to eight after an Oliver basket midway through the second, but the Rebels heated back up and used a 13-3 run to push the lead to 18 (40-22) and take control.

For Nussbaum, the key to the game was to refocus Southwestern’s defensive efforts.

“The game plan was to pressure all over and not let them get comfortable. And we had a little bit of a brain fart with our guards and we got that corrected,” Nussbaum said. “And we got the game sped up and just try to get them uncomfortable and once we did, we started getting some steals and transition.”

Southwestern led 40-26 at halftime then turned the game into a rout in the third, leading by as many as 25 (58-33) before taking a 60-39 lead into the fourth. The two teams then played even in the final period.

Mingione hit four 3-pointers and scored 21 points to lead Southwestern while Parker Davis had 14 points and Colton Cloud scored 12. But the key to the game was Cole, whose veteran presence was felt in every aspect of the game.

“It’s priceless to have a kid like that who started for three years,” Nussbaum said. “He just understands the game so well and he does whatever it takes to win.”

It couldn’t have been a worse start for Madison coach Adam Stotts, who begins his first year on the sideline after replacing Sherron Wilkerson. The Cubs started three players who haven’t played an organized basketball game in two years and, at times, it showed.

“I think it’s gonna take guys a little bit to get their legs and understand what we’re trying to do. And our bench is going to be really key. There were times where I want to sub in people but still have to figure out our rotation,” Stotts said. “It’s a benefit having guys back and we have the talent now, but again, it’s been a while for a lot of those guys. This was a big first game for them, but at the end of the day, we have a lot more a lot more goals than just one game.”

Madison senior Jackson Falconberry, who led all scorers with 30 points on 10-of-13 shooting, was the only Cub who was able to get going offensively. Grote, playing his first game in a Madison uniform, added 11 points and the Cubs shot just 37% (22-for-60) from the floor.