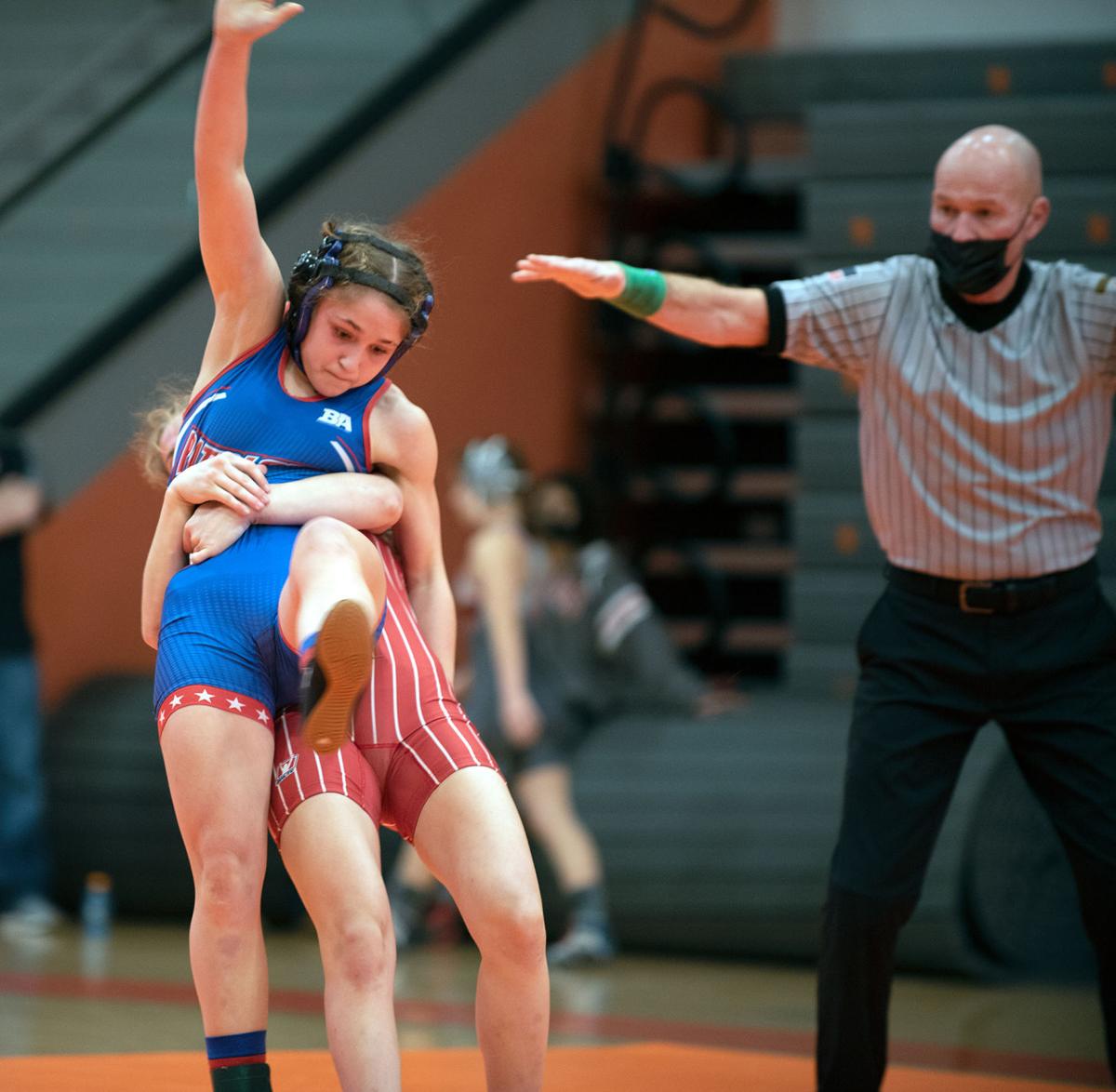 Madison’s Kelsey Bilz throws Heritage Hills’ Makenzie Smith for what proved to be the winning two points in the state championship match at 106 pounds at Hamilton Heights High School on Friday. 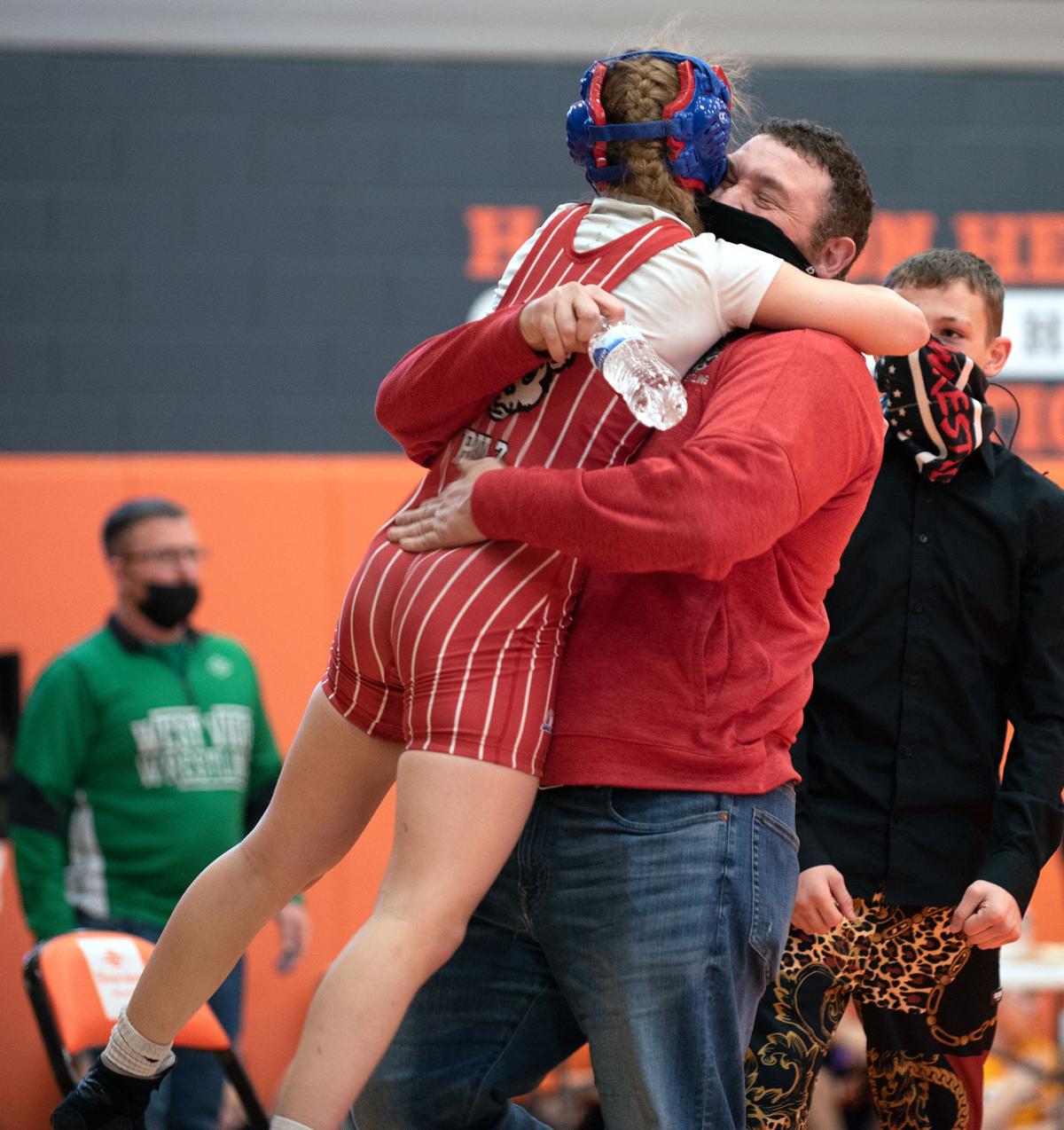 Madison’s Kelsey Bilz leaps into the arms of coach Tyson Skinner after winning the state wrestling championship at 106 pounds on Friday at Hamilton Heights High School. 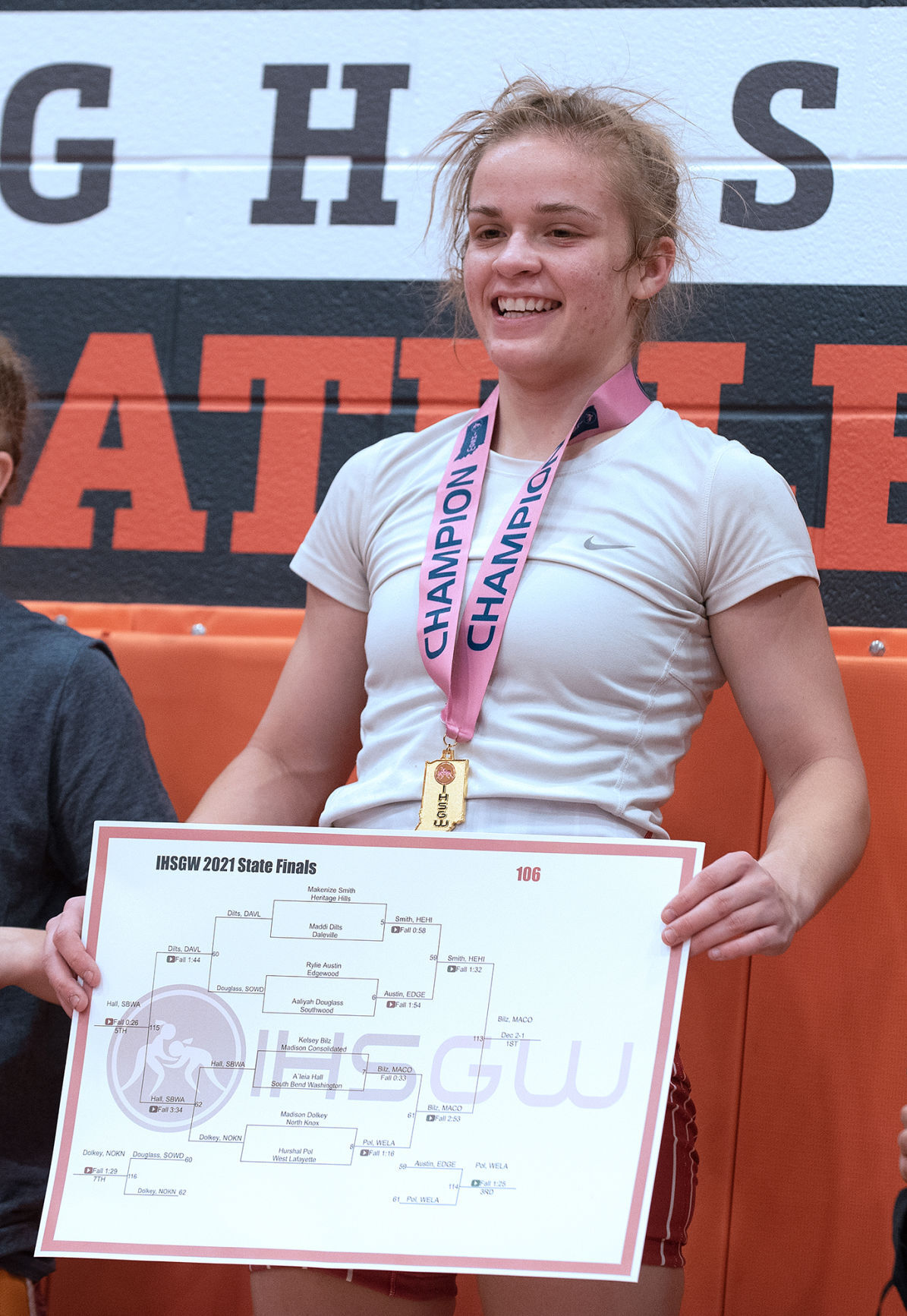 Madison’s Kelsey Bilz throws Heritage Hills’ Makenzie Smith for what proved to be the winning two points in the state championship match at 106 pounds at Hamilton Heights High School on Friday.

Madison’s Kelsey Bilz leaps into the arms of coach Tyson Skinner after winning the state wrestling championship at 106 pounds on Friday at Hamilton Heights High School.

CICERO — For a few brief moments after the final horn sounded, maybe about five seconds, Kelsey Bilz stared straight ahead, not sure how to react. But after shaking her opponent’s hand and having that same hand raised in victory by the referee, the reality sank in and a smile spread across her face.

“I was just shocked. I have been wrestling for so long and I was just hesitant and so scared that I wasn’t going to get it so when I did, it was breathtaking,” Bilz said. “I didn’t know how to react. I was just speechless.”

Bilz became the first Madison wrestler in school history to win a state championship when she picked up three wins in the 106-pound weight class during the Indiana High School Girls Wrestling State Finals at Hamilton Heights High School on Friday.

Bilz tore through her first two opponents and then outlasted No. 1-ranked Makenzie Smith of Heritage Hills in the finals, 2-1, to claim the state championship. Once the victory sunk in, she sprinted to coach Tyson Skinner who lifted his diminutive grappler up into the air.

“She deserves this. She’s a trend-setter for Madison girls wrestling and when they sanction this sport, she’s going to be the one that is the bookmark for all other Cub wrestlers to follow,” Skinner said. “I couldn’t be more proud of her.”

Bilz came into the tournament as the No. 3 seed thanks to a loss to Smith in the regional finals a week earlier. But Bilz wasted no time in setting up a rematch with Smith, pinning A’leia Hall of South Bend Washington in just 33 seconds in the quarterfinals and pinning West Lafayette’s Hurshal Pol in 2:53 in the semifinals. Smith also recorded two first period pins of her own on her march to the finals.

The key to beating Smith, Skinner knew, was improved legwork and Bilz and the rest of the Madison wrestling team spent the entire week working on nothing but her legs. And all that practice paid off.

Bilz and Smith spent the first period locked together on their feet with neither scoring a point, but Bilz found an opening early in the second period when she was able to get behind her opponent, grab Smith in a bear hug and throw her to the mat.

Bilz spent the rest of the period on top trying for the pin, but was called for a stalling warning to end her threat. But those two points for the takedown proved to be the crucial.

“That was big. If we go into the third still 0-0, we knew (Smith) was going to pick top and that would change the whole dynamic of the match,” Skinner said. “Our plans were to defend those legs and go as far as we could and then you’re talking overtime still tied at 0-0. Scoring that takedown was the whole difference in the match.”

Smith indeed took top to start the third and spent the entire period aggressively trying to turn Bilz for the pin. But other than one brief moment when it appeared that Smith had finally gotten leverage, Bilz remained steadfast on her stomach, crawling away an inch at a time.

“She’s really good at leg-riding and Jace (Walls), my partner, and I practiced every day before this just defending leg attacks,” Bilz said. “I tried to hit them a couple of times, but I was so scared that I was going to mess up and she was going to turn me so I just played it safe.”

Bilz’s tactic eventually earned her a second warning for stalling — one that came with a point awarded to Smith — but it wasn’t enough to change the outcome as Bilz closed out the match and the 2-1 championship win.

“We figured that she was going to have to get called for stalling twice in the third period for it to make a difference,” Skinner said. “The stalling call she got in the second period was a joke. She was on top trying to get the pin. I’ve never seen somebody get called for a stall in that situation.”

Although Bilz still has the IHSAA Tournament ahead of her, the state championship served as the perfect capper to her high school career. The senior is just the third female wrestler in the state of Indiana to achieve 100 career wins and she was the first female wrestler at Madison to qualify for the IHSAA Regional when she did so a year ago.

“It was neat in a way because this match was sort of a changing of the guard, from the old to the new” Skinner said. “Makenzie Smith is a terrific wrestler and she’s just a freshman and she’s going to have an outstanding career, maybe one of the best ever in this state. For Kelsey to beat her as a senior was really neat to see.”